In the latest skirmish related to the Civil War, the Confederacy lost twice.

Monuments to the “Lost Cause” in San Antonio and at the University of Texas at Austin can stay down after a ruling by the U.S. 5th Circuit Court of Appeals.

A three-judge panel ruled on Jan. 3 that the Texas Division of the Sons of Confederate Veterans and three individuals couldn’t show their rights were violated or that they were personally harmed by the removal of the monuments. 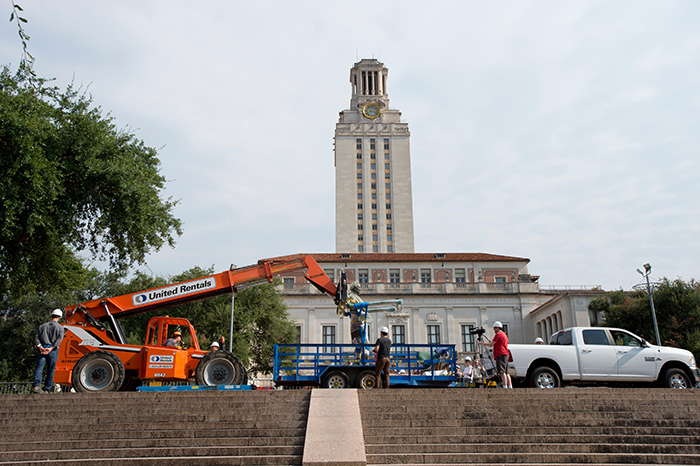 A 1933 statue of Confederate leader Jefferson Davis is removed from the South Mall at the University of Texas at Austin in 2015. (Photo by Bob Daemmrich/Alamy Photo)

“Their passion, however sincere, does not place them among the injured,” Judge Edith Brown Clement wrote, joined by fellow judges Jennifer Walker Elrod and Stuart Kyle Duncan.

The decision upheld two separate rulings by federal court judges in Texas. In both, the judges found that the Sons of Confederate Veterans and the members of the organization who sued lacked the legal standing to claim the removal of the statues violated their First Amendment rights.

The University of Texas case centered on statues of Confederate President Jefferson Davis, Generals Robert E. Lee and Albert Sidney Johnston, and John H. Reagan, the postmaster general of the Confederate States of America. Also included was President Woodrow Wilson, a descendant of Confederate soldiers with a famously racist presidential legacy, including hosting a whites-only screening of “The Birth of a Nation” at the White House and expanding segregation in federal agencies.

The monuments were erected with funds donated in the early 1900s by George Littlefield, a major in the Confederate Army.

University of Texas President Greg Fenves ordered the statues of Wilson and Davis moved from the main hall at the university in 2015 after Dylann Roof shot and killed nine people at Emanuel African Methodist Episcopal Church in Charleston, South Carolina.

The other statues were removed two years later after the deadly “Unite the Right” rally in Charlottesville, Virginia.

Since Roof’s attack on the church, at least 138 statues and symbols to the Confederacy have been removed from public spaces.

The appeals court ruling is the latest in a series of decisions upholding the decision to take down or move monuments in such places as New Orleans; Memphis, Tennessee; Louisville, Kentucky; and Dallas.

A university commission recommended moving the memorials to UT’s Dolph Briscoe Center for American History, where they were put on display for further study in the context of the Civil War.

“Erected during the period of Jim Crow laws and segregation, the statues represent the subjugation of African Americans. That remains true today for white supremacists who use them to symbolize hatred and bigotry,” Fenves said in a statement announcing the relocation of the statues in 2017.

The San Antonio ruling stems from a decision by the city to move a Confederate monument from a city park in the early morning hours of Aug. 31, 2017, just weeks after Unite the Right.

The city also removed two memorial cannons from the park.

The statue was similar to hundreds of others across the country, featuring a Confederate soldier with his right arm outstretched toward the sky and his index finger pointing upward.