Members of the League of the South will join with a new “heritage” group, United Confederates of the Carolinas and Virginia, for an armed protest in Lexington, Virginia, this Friday to inflame the ongoing debate over the removal of Confederate symbols from the public square.

In a Dec. 28, 2019, Facebook post, Woody Weaver Jr. of Fuquay-Varina, North Carolina, shared a photo on Facebook of himself raising the new flag of his group, the United Confederates of the Carolinas and Virginia (UCCV). It’s an adaptation of the Army of Northern Virginia battle flag (the recognizable flag colloquially referred to as the Confederate battle flag) adorned with the group’s initials in white. Holding the flag with Weaver is Jessica Reavis, a national officer in the neo-Confederate hate group League of the South and a Virginia resident.

This Flag will be going to Lexington VA. UCCV stands for UNITED CONFEDERATES of the CAROLINAS and VIRGINIA. I am the Cofounder. It is a informal Alliance of all Nationalists to Unite under one banner. Respect everyones differences and roll out togeather [sic] in numbers. There is a 3 member board to keep all togeather and a Southern \ Confederate Nationalists Platform that is adhered to.

1. No White Guilt or PC Mindset. 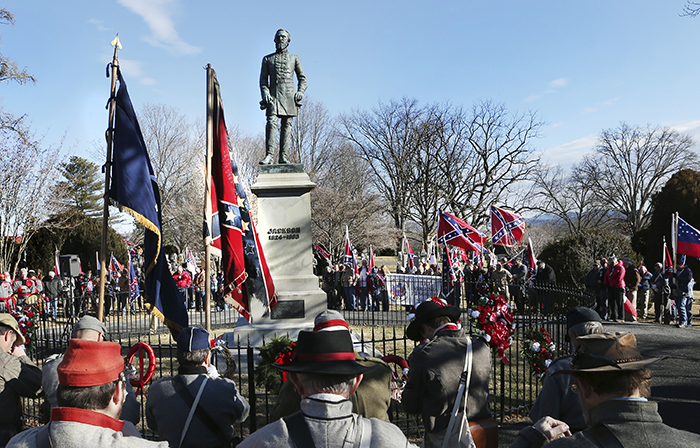 The “Lexington Parade” in question is this Friday’s Lee-Jackson Day parade. Members of hate groups have previously participated in the event, which occurs every year on the Friday before Martin Luther King Jr. Day, a federal holiday. A Facebook page for the event created by the Virginia Flaggers, a neo-Confederate heritage group, showed 51 people listed Wednesday as “going” and 112 “interested.”

Weaver appears to have joined with Reavis in propping up UCCV as a vehicle for members of the League in those states to participate in public pro-Confederate activism, something the group has distanced itself from since 2018.

On Oct. 1, 2018, the League’s “PR chief” Brad Griffin wrote on his blog, “Instead of publicly announcing our events on the internet and attracting mobs of counter-protesters,” the League should pivot to “stealth activism,” where “we’re just going to show up with vetted activists and engage with the public for a few hours.”

However, Reavis has had a difficult time abiding by Griffin’s strategy. She has become a fixture at ongoing rallies in Pittsboro, North Carolina, where neo-Confederates have congregated weekly to protest an Aug. 19, 2019, decision by the Chatham County board to remove a statue honoring Confederate soldiers. Reavis was arrested Oct. 5, 2019, for bringing a gun to a rally in Pittsboro, North Carolina. In response, League of the South chairman Shaun Winkler encouraged group members to converge on the town for a protest, a call backed by League president Michael Hill.

The League abandoned the protest after Hatewatch published a story about their plans to attend.

Robert Isaacs, aka “Ike Baker,” a League officer from Kentucky, outlined the group’s new uniform policy in a private League group on Nov. 1, 2019:

If League members choose to participate in any event not League-led or sponsored, then they need to do so as individuals not in uniform or representing the League in any way.

To wit: Any LS members choosing to attend non LS planned and conducted activism of any kind are present at such activities at the invitation of the sponsoring organization and are present in strictly personal support of the inviting group as individuals, not as uniformed LS personnel representing the League of the South in any capacity, whether official or unofficial.

The announcement amounted to something of a rebuke for Reavis, who was arrested wearing a shirt sporting the League of the South logo.

In light of this, UCCV represents an outlet for League members to continue appearing alongside other neo-Confederates at public demonstrations without drawing the ire of their group’s leadership.

Weaver further clarified his welcoming stance on the League in a series of posts defending the group against detractors in the Sons of Confederate Veterans (SCV):

Let’s just say. [Unnamed SCV member] ant [sic] much of a man. Lol. Plus his Lee buddy also puts out slander videos on me and LS. He puts out and slanders. But he will try and buddy up with members. He personally slammed me full knowing my intentions with VA LS and the UCCV. He is going down Also.

Weaver explained at the end of his post that the “V” for Virginia at the end of “United Confederates of the Carolinas and Virginia” exists because of a strong partnership with the League of the South’s Virginia chapter.

“Let me say this,” Weaver wrote. “In the UCCV. VA LS puts the V on it. That Alliance is approved all the way up the Chain.”