Hatewatch reported that Gebert, while being investigated by the State Department for his ties to a hate movement, has produced a series of podcasts steeped in the white genocide conspiracy theory and promoting white nationalist fatherhood. Gebert’s show typically features a co-host who employs the stage name “Potato Smasher.” “Potato Smasher” talked about wearing a “swastika shirt” on one episode of Gebert’s show and made a comment about suffocating Indian people to death with plastic bags on another.

Hatewatch reviewed the social media posts of a man named Michael McKevitt, who has employed the pseudonym “Potato Smasher” online and is linked to members of The Right Stuff and Identity Dixie, a neo-Confederate group that spun out of that organization. His wife, Allyson McKevitt, is also connected to the white nationalist movement, Hatewatch determined. She sometimes uses the pseudonym “Evelyn.” Public records confirmed that Allyson and Michael McKevitt are married. 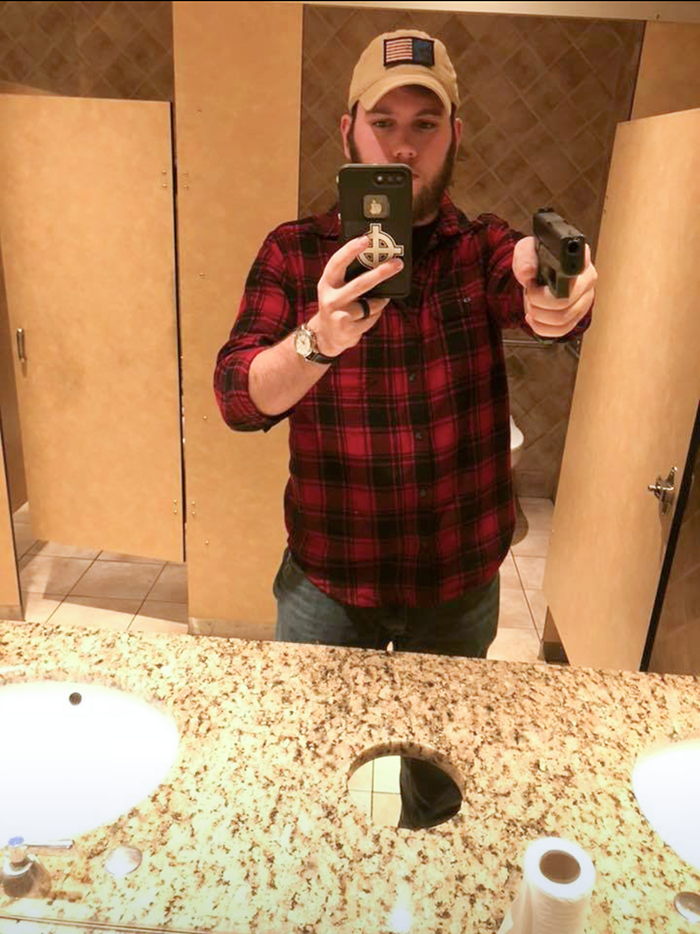 Before collaborating on a podcast with white nationalist State Department official Matthew Q. Gebert, Michael McKevitt used a number of different aliases in a Facebook group for the neo-Confederate outfit Identity Dixie. McKevitt posted this picture of himself under one of those aliases in December 2018. The sticker on McKevitt's phone case is the "Celtic cross," often used in white-power communities with the slogan "white pride worldwide."

Hatewatch attempted to reach the McKevitts by phone and email for a comment on Gebert’s podcast but were unsuccessful. Here’s how Hatewatch identified the McKevitts as key associates of Gebert:

'Day of the Rope Soap'

Allyson McKevitt works with a soap company that Gebert and Potato Smasher periodically promote on his show. The soap company uses white nationalist in-jokes as part of their marketing. They once sold a product called “Day of the Rope Soap,” for example. “Day of the Rope” ﻿is often understood as a reference to the white supremacist novel The Turner Diaries, in which racist, antigovernment revolutionaries hang people they deem to be race traitors from lampposts, trees and utility poles.

McKevitt, using his own name, posted “buy my wife’s soap” to the extremist-friendly Russian Facebook clone VK.com on Nov. 6, 2019, and included a link to the soap company’s website. In the same post, McKevitt clarified, “My wife makes the candles, she isn’t [the soap company].” McKevitt has since deleted his account on that site, but Hatewatch archived it.

Here’s an example of Potato Smasher promoting his wife’s soap company on a Jan. 8, 2020, episode of their show:

“To shill for my wife, the soap that [the company] makes is amazing,” he said.

On the same episode, a regular guest who goes by the name “Sam” said, “Smasher’s wife is involved in the candle making [for the soap company].”

In the same episode, Potato Smasher told a story about sending out candles made by the company on behalf of his wife, and how an interaction with an employee at a shipping company nearly led to his identity being exposed.

“It’s funny you mention that because I had multiple ‘oh my god, it’s happening’ moments like that before it actually did happen,” Gebert replied, referring to Hatewatch exposing his identity as “Coach Finstock” in the movement.

Additional open-source evidence links Michael McKevitt to Gebert. A person going by the name Nick Brown used the mobile payment service Venmo to send a person named Michael McKevitt money on Aug. 22, 2019, based upon a review of that account. Brown wrote “Coach and Wolfie” as the description for why the payment was made to McKevitt. Coach and Wolfie are pseudonyms used by Gebert and his wife, as Hatewatch previously reported.

Antifascist activists claim that Nick Brown is the man behind the pseudonym “Braxton Bragg,” who is a member of the white nationalist hate group Patriot Front. The group is openly fascist, and members have demonstrated connections to Michael Peinovich’s The Right Stuff network. Gebert and his wife, Anna Vuckovic, are also connected to Peinvoich, as Hatewatch previously reported.

White nationalists often solicit donations for one another after a person is publicly outed for being a part of their movement. The money transfer was made roughly two weeks after Hatewatch published the investigation into Gebert’s identity. Gebert has also expressed gratitude on his podcast for financial supporters of his content.

Gebert also recorded a podcast in “Potato Smasher’s garage.” The episode was published Dec. 16, 2019. Through his stage name Coach Finstock, he talked about being there to celebrate “Potato Smasher’s birthday.” Michael McKevitt celebrated his 26th birthday four days before the date the podcast was published, according to information Hatewatch confirmed with the Army. 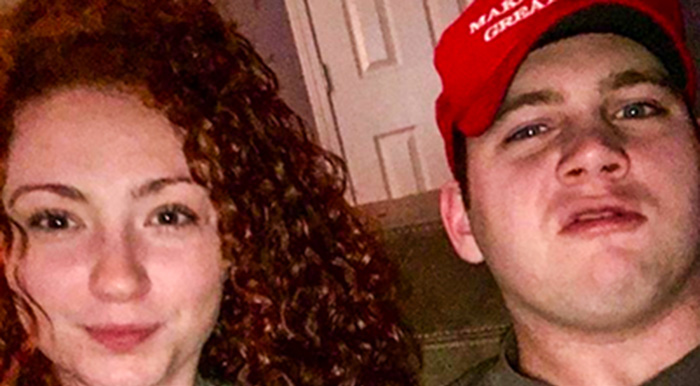 Michael and Allyson McKevitt are pictured here in an image that was posted to the fundraising site GoFundMe in 2017.

Gebert introduced a woman as “Potato Smasher’s wife” on the same Dec. 16, 2019, episode, and she discussed having twins. Allyson McKevitt used pictures of twins for the wallpaper of her Facebook account.

“Potato Smasher’s Wife” referred to herself as “Evelyn” on that episode of Gebert’s podcast. She also used the stage name “Evelyn” on women’s issue-themed white nationalist podcasts, she said.

Allyson McKevitt, speaking as “Evelyn,” described herself as “Irish and Scottish predominantly,” on the episode. She also recounted her “red pill story,” meaning how she was radicalized to the white nationalist cause. She said it started when her husband shared a meme with her that detailed how Jews held leadership positions in certain companies. She referred to the Holocaust as the “Holohoax” on the episode, which is a common slang term in white nationalist circles falsely implying that Jews were not the victims of genocide during World War II.

“Oh boy, oh boy, I’ve got a tinfoil hat too now,” she said on Gebert’s show, describing the moment she joined her husband in sharing conspiratorial views about Jews.

Hatewatch also found evidence of Allyson McKevitt using the pseudonym “Evelyn Brauny” on Facebook. A person going by the handle “evelynbrauny1988” participated in a server on the gaming app Discord in which users planned the deadly “Unite the Right” event that took place in Charlottesville, Virginia in August 2017, according to a scrape produced by the journalist collective Unicorn Riot.

A person going by the name “Wade Ferret” published a post on the fundraising site GoFundMe on Sept. 14, 2017, stating that McKevitt was serving as an “active duty soldier” in the military at that time, without specifying any branch:

“Mike and Allyson's car died while on vaction [sic] to visit family in Pennsylvania. While Mike is a mechanic, the problem was more than he could tackle so far from home,” the call for fundraising begins. “Mike is an active duty soldier stationed in [North Carolina], so he had no choice but to leave the car behind and return to duty. This situation has put his young family in a bind and they need help for a down payment on a new vehicle. If they don’t get one soon, Allyson will lose her job.”

The soap company for which Allyson McKevitt makes candles launched its Twitter account in October 2018, making it unlikely that her job at the time was related to that business endeavor.

In a matter of hours after Hatewatch reached out to the McKevitts for a comment about Gebert’s podcast, “Wade Ferret” took down the September 2017 GoFundMe page. “Wade Ferret” is the pseudonym of someone who organizes with the North Carolina chapter of Identity Dixie, Hatewatch determined after a review of his social-media posts.

One of the publicly visible donors on the GoFundMe page for the McKevitts was “Mike Enoch,” which is the stage name of Peinovich of The Right Stuff network. Hatewatch reached out to a lawyer representing Peinovich to ask a question about the McKevitts but did not receive a response.

The Army confirmed to Hatewatch that McKevitt was both active duty and a mechanic in September 2017, noting that he served as a UH-60 helicopter repairer in the Army from August 2012 to August 2018.

Hatewatch Staff contributed to this report.