Within hours of arriving in Budapest, Kevin DeAnna was ready to leave.

“Instead of this being an adventure, I just want to come home already,” he wrote to his then-girlfriend, former Breitbart News editor Katie McHugh, Oct. 1, 2014.

DeAnna, the former head of the far-right Youth for Western Civilization and a prolific essayist for a number of white nationalist sites, had numerous reasons to be unhappy. He was, after all, one of many in a dwindling crew of white nationalists and far-right extremists from the United States and Europe who had traveled to what was meant to be the inaugural European conference for Richard Spencer’s National Policy Institute (NPI). 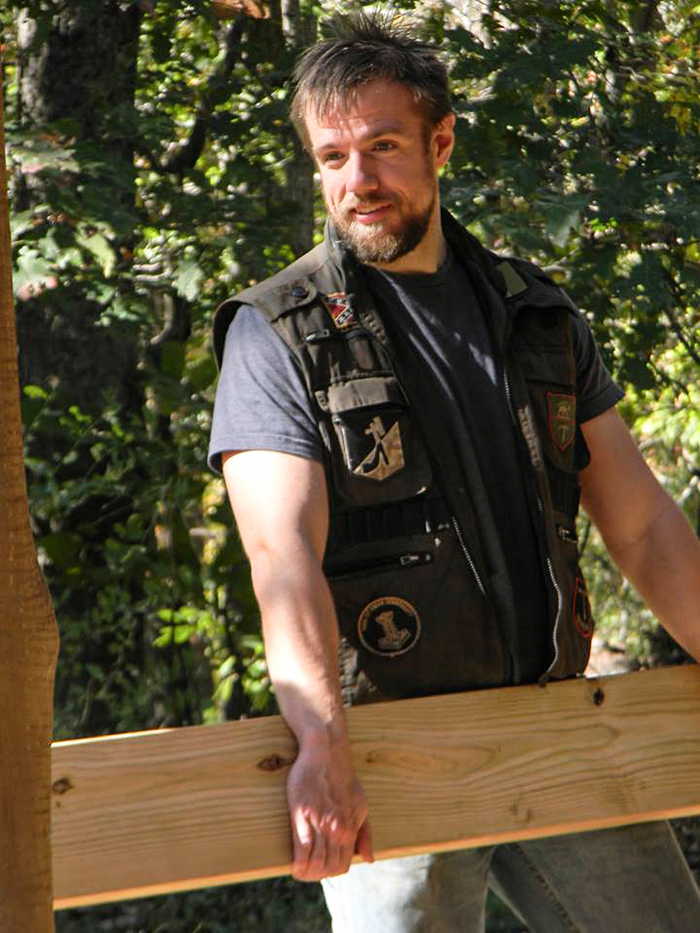 Kevin DeAnna traveled to Budapest, Hungary, in 2014 for an ill-fated National Policy Institute gathering with Richard Spencer and other "alt-right" members. (Photo via Facebook)

The conference, titled “The Future of Europe,” had been billed as an “exceptional opportunity” for bringing together far-right radicals from across the globe in a country seemingly open to their views, but political pressure caused the event to collapse in on itself.

Though several news outlets reported on NPI’s European excursion at the time, a trove of Google Chats and emails leaked to Hatewatch by McHugh sheds new light on DeAnna’s role in the event.

McHugh has since renounced her previous associations with the white nationalist movement. She dated DeAnna from 2013 to 2016. Much of the responsibility for carrying out the event fell to DeAnna – a man who had, on the face of it, little to do with Spencer’s white nationalist think tank. With many of the conference’s original organizers and speakers either in jail or barred from Hungary, DeAnna’s low profile allowed him to operate within the country with ease.

DeAnna on his role in rescuing NPI’s conference

NPI’s first European conference appeared to be an ideal gathering spot. Jobbik, Hungary’s xenophobic, far-right party and an initial backer for NPI’s October 2014 conference, had snagged roughly 20% of the vote in Hungary’s parliamentary elections several months prior, despite a laundry list of antisemitic and xenophobic statements from party members.

But two weeks before NPI conference participants were set to go, Viktor Orban – Hungary’s far-right, populist prime minister – condemned NPI and at least one of the event’s more prominent scheduled speakers, Russian far-right theorist Aleksandr Dugin. Then, a few days before most speakers were scheduled to arrive in Hungary, Orban’s government went a step further, announcing that they intended to use “‘all legal means’” to halt the conference. In some cases, such as with NPI co-founder and funder William Regnery II, that meant being tossed in a holding cell overnight and deported. For Dugin, it meant canceling travel plans altogether.

DeAnna was not deterred, though he did present his decision to attend as more of a social, rather than professional, obligation. Doing so provided some semblance of plausible deniability, particularly in the face of the Hungarian government’s crackdown on the event.

DeAnna arrived in Budapest on Oct. 1, 2014. Not long after, he fired off an email to McHugh, informing her that he was safe and “made it into Hungary without being arrested.” While lamenting the financial costs of the event, he noted that it was a learning opportunity for the movement.

Jared [Taylor] got a venue, so mini conference is a go. Don’t know if Richard made it in yet.

The “mini conference” was to be held, according to American Renaissance head Jared Taylor’s account, at a “charming, traditional restaurant” in a private room. While remaining vague on the details, DeAnna followed up 40 minutes later.

Oct. 2, 2014, 1:16 pm: As the collapse continues, Richard has been successfully smuggled into the country. Met up with him and some French nationalists . . .

Spencer, according to a journalistic account of the conference published in Foreign Policy, had managed to evade attention from border guards by entering the country by train via Austria. 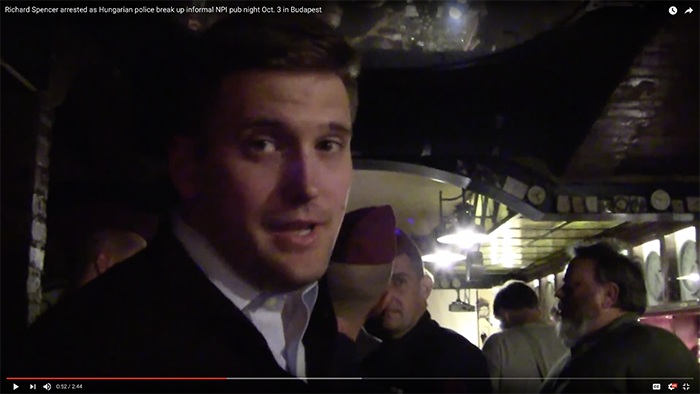 "Alt-right" leader Richard Spencer was arrested while in Budapest, Hungary, in October 2014 at a National Policy Institute gathering.

With Spencer in Budapest, the crew gathered on Oct. 3, 2014, at a local bar. DeAnna, who had opted to remain at the hotel that night, emailed McHugh in quick succession to inform her that the situation had begun to decline dramatically:

Oct. 3, 2014, 8:22 pm: Spencer just got arrested by [the] Hungarian police. Luckily, I was so sick I stayed at the hotel. But I have all his stuff. I’m half expecting to be raided tonight.

Oct. 3, 2014, 10:50 pm: I’ve secured another place to say [sic]. I manged [sic] to get Richard’s computer and bag. Looks like whether this conference happens comes down to Kevin.

Spencer and others had managed to shake off counterprotesters, but they had no such luck with the Hungarian police. That same night, Spencer and several others were detained on charges that they had failed to carry the proper documents on their person.

With Spencer stuck in jail, Foreign Policy reported that DeAnna and Taylor “did their best to take charge.” By way of a secret meeting point, the pair gathered the remaining attendees at a restaurant, successfully evading any additional run-ins with police or protesters.

Pseudonymously reporting on the alt-right abroad

DeAnna did little to mask his identity among journalists, implying in communications to McHugh that doing so was futile. “[One journalist] recognized me from CPAC three years ago if you can beliee [sic] that,” he told McHugh via Google Chat on Oct. 5, 2014.

His fellow white nationalists, however, were more careful. For instance, an early version of Taylor’s report for American Renaissance credited DeAnna explicitly. But as Hatewatch reported at the time, his name was quickly scrubbed and replaced with “trusted Spencer associate” to protect his anonymity.

This distance made DeAnna’s pseudonymous reporting possible without blowing his cover. As “James Kirkpatrick,” DeAnna provided VDARE readers with regular updates. On Oct. 2, 2014, “Kirkpatrick” blasted Jobbik for giving into pressure from Orban, noting that “such a girlish reaction would be hilarious if it were not so pathetic.” The next day, “Kirkpatrick” shared video evidence of Spencer’s arrest, which had been given to him by one of the few freelance journalists who had been cleared to cover it in full.

Then, on Oct. 5, “Kirkpatrick” offered a brief summary of the dinner the night prior. While leaving it ambiguous as to whether he was or wasn’t at the event, DeAnna, writing as “Kirkpatrick,” described the dinner as “packed,” even though the political pressure would have been enough to “[scare] off most people.”

The same day, DeAnna updated McHugh on Spencer’s whereabouts, informing her that part of the issue lay in the fact that Spencer “gave [the police] a fake name initially and then didn’t have a passport.” He offered a more detailed explanation via email a few hours later:

Deanna, Oct. 5, 2014, 9:27 am: I visited Richard in a Hungarian prison (already a hilarious sentence) and brought him some stuff, including his passport. Apparently, he will be sent home tomorrow. Poor kid is exhausted – they are using sleep deprivation against him, keeping the lights on, moving him around, talking to him all the time etc.

I’ve read reports that he will be banned from the European Union for three years . . .

The police took my passport and presumably copied it or whatever, but I was simply treated as a visitor, not a collaborator. . . . Interestingly, nothing has happened to Jared . . .

Taylor echoed DeAnna’s sentiments in a conversation with a reporter from Slate. Spencer, who had somehow managed to keep his phone on his person while in prison, had been firing off emails about logistics to participants throughout his incarceration. Taylor likened his digital communications to Dr. Martin Luther King Jr.’s 1963 “Letter from a Birmingham Jail.”

With a few days to kill, DeAnna told McHugh he was spending time with Craig Fraser, former head of a National Action ­– the first neo-Nazi group to be outlawed by the U.K. Home Office under the 2000 Terrorism Act – training camp dubbed Sigurd Legion, and Matt Tait, a former member of the far-right British National Party (BNP). (As Hope Not Hate documented in 2016, Fraser’s involvement with the Sigurd Legion camps ceased after too much media exposure.) The three used the time to strategize – and, of course, drink.

DeAnna, Oct. 5, 2014, 2:02 pm: Matt and my thinking is very similar now – building enclaves, tribes, etc. Sigurd Legion is basically the Wolves [of Vinland] only more political and on steroids. . . .

Success, DeAnna continued, was dependent on “a number of strategies working at once.”

Writing in Radix a short time later, DeAnna elaborated on these same points using his “Gregory Hood” pseudonym. While “Hood” denied being at the event, he couched his observations within a broader exegesis of the future of the “identitarian movement.” Though this ultra-nationalist movement in Europe has its roots in the French far-right, anti-immigrant coalition Bloc Identitaire, the mantel of identitarianism has, as Hatewatch reported in 2015, been taken up by American white nationalists as well.

These real-world gatherings, “Hood” argued, were crucial to the survival of the movement. For one, they lay the groundwork for what “Hood” referred to as “European unity.” American identitarians, “Hood” explained, needed to “start building real power on the ground.” Still, working within the democratic system or counting on another country for help, he observed elsewhere in the piece, was futile.

Tribalism, “Hood” concluded, was the way forward. “You. . . need to start working with like-minded friends in your communities to build an explicit White tribe,” he wrote, later arguing that such a “mutual aid society” was the only way to achieve lasting power.

“The experience of the European Congress showed that we will not be able to rely on anyone else to come save us. The different tribes of our European family are under occupation,” he continued. White nationalists, in other words, had no one to rely on but themselves.