Sen. Mitt Romney may have found himself locked out of the 2020 Conservative Political Action Conference (CPAC) in National Harbor, Maryland, from Feb. 26-29, but Rep. Steve King, R-Iowa, seemed to find himself at right at home – whether CPAC’s leadership liked it or not.

The big headline this week has been the self-quarantining of some lawmakers who attended CPAC and came in contact with an attendee who later tested positive for COVID-19, also known as the coronavirus, but King's presence was also notable. The congressman has come under fire many times for his comments regarding white nationalism and white supremacy – including a recent hourlong presentation on the House floor, where he claimed the terms “white nationalist” and “white supremacist” had become “weaponized.” King, who has spoken at CPAC on numerous occasions throughout the years, was absent from this year's conference programming.

But King’s remarks in an unofficial introduction at an official CPAC panel indicate he wasn't completely excluded. 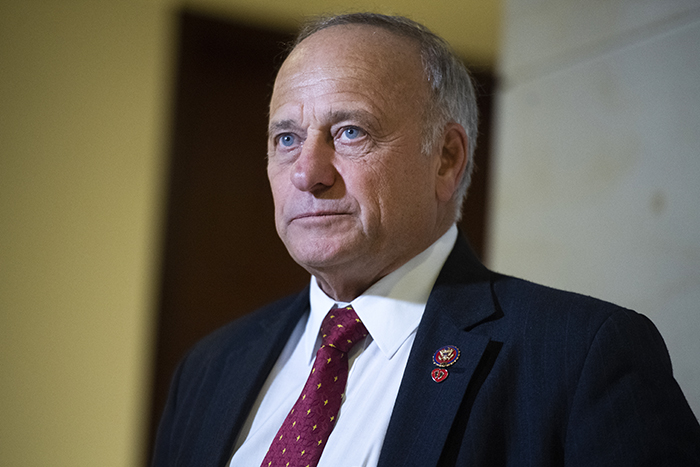 Rep. Steve King, R-Iowa, attends a news conference after being denied entrance to the deposition and access to the transcripts related to the House's impeachment inquiry in the Capitol Visitor Center, Oct. 16, 2019. (Photo By Tom Williams/CQ-Roll Call, Inc. via Getty Images)

King gave a five-minute introduction to a panel on freedom of speech, which Hatewatch attended Feb. 27. The discussion featured Elisabeth Sabaditsch-Wolff, an Austrian anti-Muslim activist convicted of hate speech in 2011; Clare Lopez of anti-Muslim hate group Center for Security Policy (CSP); Lathan Watts of the Texas-based, religious-freedom-focused nonprofit First Liberty Institute; and conservative radio host Todd Starnes. King, who has been acquainted with Sabaditsch-Wolff for years and who has spoken at CSP events (not to mention CSP head Frank Gaffney’s radio show) on a number of occasions, received a warm welcome from the audience. Afterwards, he took to the podium to decry “cancel culture” and the “politically correct police.”

“I’m as happy to be a spectator as I am a speaker,” King told the audience in one of the smaller rooms designated for breakout sessions at the Gaylord National Resort and Convention Center. “This place, and this entire hotel, is full of friends.”

“We are a great big family of . . . constitutional, Christian conservatives,” he said, looking around the room.

King blasted the “politically correct police all over the planet” for “deciding what we can say . . . and . . . assigning us beliefs systems that they say we have because we are on the opposite side of them politically.” He recommended that attendees familiarize themselves with Sabaditsch-Wolff’s work – as well as “ intellectual dark web” darling Douglas Murray’s 2019 book, The Madness of Crowds – to better understand “where our civilization will be in the next decade or two.”

Then, without mentioning the specifics of his own previous comments on white nationalism, King relayed an interaction he had with an anonymous literary scholar. According to King, this same individual deduced that, of the dozen or so “things that [King] had been attacked for,” all were based solely on “misquotes” and “misinterpretations.”

“He found that . . . [in each case] what I said was right . . . and just, and moral, and consistent with Western civilization’s values and American values,” King told the crowd.

Though King declined to specify the content of the “just” and “moral” comments that had drawn the ire of the “politically correct police,” he was stripped of his committee assignments in early 2019, following an interview with The New York Times. In the interview, King asked the Times, “White nationalist, white supremacist, Western civilization – how did that language become offensive?”

While he later walked back these statements, asserting that he “reject[ed] those labels and the evil ideology they define,” the comments came a mere few months after King found himself in hot water over an interview with the far-right Austrian site Unzensuriert (or “Uncensored”). According to reporting from Christopher Mathias and Nick Robins-Early on HuffPost, the interview largely revolved around the racist conspiracy theory of the “great replacement” – a concept that has inspired several acts of white supremacist violence across the globe.

King’s endorsement of the “great replacement” may have been one of his more well-known appeals to white supremacist and white nationalist rhetoric, but it was far from his first. As Huffpost detailed in 2018, King’s racist rhetoric and engagement with white nationalist leaders internationally received little pushback from his fellow lawmakers for many years.

A panel with friends in high places

King was far from alone in bemoaning the pushback against his statements on white supremacy and Western civilization. Lopez decried the “great purge” of those warning about the dangers of so-called “radical Islam” that she claimed had supposedly begun under former President George W. Bush. Federal law enforcement agencies dropped anti-Muslim lectures and propaganda being used in official training materials after investigative reports brought them to light and pressure was applied by civil rights groups. Sabaditsch-Wolff, meanwhile, recounted the hate-speech trials she faced after stating during a talk organized by Austria’s far-right Freedom Party that the prophet Muhammad “enjoyed having something going on with kids.”

“You don’t need concentration camps or gulags in Europe anymore. People just disappear,” Sabaditsch-Wolff, who frequently tours the United States to warn conservatives about the supposed death of free speech in Europe, told an audience of around 40 CPAC attendees at her panel Thursday. She continued: “I’m unemployable. Not even McDonald’s will hire me.”

“Unemployable” or not, Sabaditsch-Wolff wasn’t without an attentive audience. Photos published Feb. 28 at the far-right New English Review showed her meeting with King in his office on the Hill, along with an unnamed Austrian representative to the European Parliament. Another image depicts the Austrian anti-Muslim activist with Rep. Louie Gohmert, R-Texas, in his office. These meetings on the Hill were far from their first. King, for his part, hosted Sabaditsch-Wolff at his Conservative Opportunity Society – a group dedicated to restoring “the pillars of American Exceptionalism.” He, along with Rep. Michele Bachmann, R-Minn., Rep. Robert Pittenger, R-N.C., and Gohmert, met Sabaditsch-Wolff in Vienna in 2014, where they reportedly said they were “appalled by the decision” to uphold the anti-Muslim activist’s hate speech conviction.

It’s not surprising, then, that King and Sabaditsch-Wolff crossed paths at CPAC more than once. A photo taken by Mediaite reporter Zachary Petrizzo showed the pair outside the main hall amid a small pool of reporters.

But unlike his companion, CPAC preferred to ignore King. When questioned about King’s presence at the event, CPAC officials seemed eager to keep the lawmaker at an arm’s length, telling one reporter that “anyone can buy a ticket.”