Mark Krikorian, executive director of the Center for Immigration Studies (CIS), has attempted to distance his organization from the far-right actors he has cited over the years to promote CIS’s anti-immigrant agenda.

But Hatewatch’s analysis of CIS’s weekly email newsletters shows that for nearly a decade the center has been promoting material from Kevin DeAnna, one of the alt-right’s most prolific propagandists. CIS newsletters from 2012 to present show the center has circulated at least 83 articles by DeAnna, former Youth for Western Civilization founder and current American Renaissance staff writer. A Hatewatch investigation revealed that DeAnna wrote for VDARE, a white nationalist website run by Peter Brimelow, beginning in 2011, under the pseudonym “James Kirkpatrick.” CIS circulated “Kirkpatrick” articles from The Social Contract, a journal established by CIS’s founder, John Tanton, in 1990. CIS cited “Kirkpatrick’s” work at both VDARE and The Social Contract.

Hatewatch reached out to both DeAnna and CIS for comment. DeAnna didn’t respond, and CIS declined to comment. 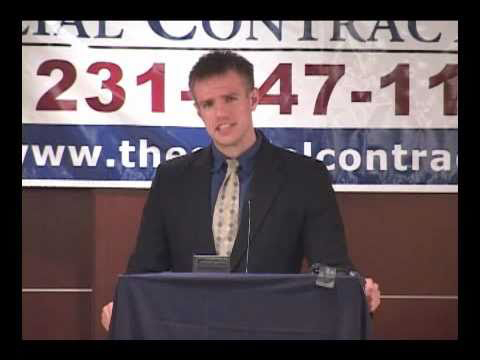 Kevin DeAnna speaks at a 2010 conference of The Social Contract Press. (Screenshot via YouTube)

Hatewatch first detailed the proliferation of VDARE links in CIS’s weekly newsletters in 2017, concluding that the anti-immigrant think tank had circulated over 1,700 VDARE articles over the course of 10 years. Krikorian argued in The Washington Post in March 2017 that such findings were “trivial.” The center, he contended, linked to “immigration commentary (from all sides)” in its weekly email roundups; hence, it should come as no shock that some of the authors “occasionally . . . turned out to be cranks.”

In “Kirkpatrick’s” case however, the inclusion of material authored by DeAnna under a pseudonym bolsters already-existing evidence of the center’s boosting of white nationalist talking points. DeAnna, under the pseudonym “Gregory Hood,” was a frequent and prolific contributor to a range of white nationalist sites, beginning in 2008.

Many of the “Kirkpatrick” articles in CIS newsletters were riddled with common white nationalist tropes. Perhaps the most common theme involved the conspiracy of the “great replacement.” The concept originated with French far-right thinker Renaud Camus’ racist book of the same name, published in 2010. Though the term has, at times, been painted as a pseudo-intellectual version of the theory of “white genocide,” it has nevertheless inspired the same degree of racist violence, including at Christchurch, New Zealand, and El Paso, Texas, in 2019.

A 2018 English adaptation ­of Camus’s original text titled “You Will Not Replace Us” referred to an ongoing “genocide by substitution” in both Europe and America. As an article in The Nation on Camus and the “great replacement” observed, Camus portrayed the so-called “replacists” – that is, proponents of multiculturalism and immigration – as soon to be “devored [sic]” by the “replacees” they invite in.

CIS linked to numerous pieces from “Kirkpatrick” that pushed replacement theory. At times, the articles named the racist conspiracy outright. One Sept. 7, 2015, newsletter links to an article titled “The ‘Great Replacement’ Is Killing The EU – Long Live a Europe Of Nations!” In it, “Kirkpatrick” refers to the ongoing “immigrant invasion” in Europe, implying that the continued existence of the European Union has made the replacement of European peoples possible.

In other places, “Kirkpatrick’s” references to replacement theory were subtler. CIS’s Feb. 13, 2016, newsletter promoted an article that blasted then-presidential candidate Marco Rubio for not being sufficiently anti-immigrant. DeAnna, writing as “Kirkpatrick,” bemoaned the “sweeping demographic changes in Europe” and the allegedly disastrous effect it would have on “Western civilization.” Another article, included in CIS’s Nov. 15, 2018, newsletter, penned by “Kirkpatrick” for Social Contract press referred to migration as punishment inflicted by a cadre of global elites.

On July 28, 2019, CIS linked to an article titled “Say It, GOP! – Or Just Give It Up: Open Borders Is TREASON! The Left Is ANTI-WHITE!” In the piece, “Kirkpatrick” claimed the left had ensured that anyone who didn’t “want whites replaced in their own countries” would be tarnished as “far right.” Furthermore, he noted, assertions that Native Americans or any other indigenous minority in Europe had a right to the land led to the “logical conclusion” that “Westerners” needed to be dispossessed. That sort of “thinking culminates in genocide,” “Kirkpatrick” told readers, implying the possibility of what white nationalists refer to as a “white genocide.”

Most of “Kirkpatrick’s” articles in CIS’s newsletter, however, focused on pushing the right to embrace more draconian restrictions on immigration. Like many other authors at VDARE, he lamented the power of what the site often referred as “Conservatism, Inc.” – a stand-in for the right-wing media, think tank, and political establishment – and blasted insufficiently anti-immigrant Republicans as “traitors.”

“Perhaps more than any other person in this country,” “Kirkpatrick” argued, “Newt Gingrich is responsible for the astonishing conservative retreat on racial preferences and the continued existence of an anti-white racial spoils system in jobs and education.” “Kirkpatrick’s” rant linked to a 2011 VDARE article referring to affirmative action as “anti-white quotas.”

Another CIS newsletter from July 8, 2016, linked to a “Kirkpatrick” article, which referred to anti-Trump Republicans as “RATs” and “traitors to the party.” The conservative opposition to Trump, “Kirkpatrick” opined, were deserving of such a title due to their cooperation with the “Lying Press.” The term, as “Kirkpatrick” observed in a VDARE article from June 2016, is an English translation of the German term Lügenpresse, which has become popular among certain circles of the so-called “alt-right.” Though the term itself originated as a rhetorical cudgel in the mid-19th-century, the Nazis further popularized it.

While CIS executive director Mark Krikorian attempted to distance himself and the center from the extreme, racist far-right, he has, as recently as last February, asserted the importance of bringing pieces published on those sites to the attention of readers. 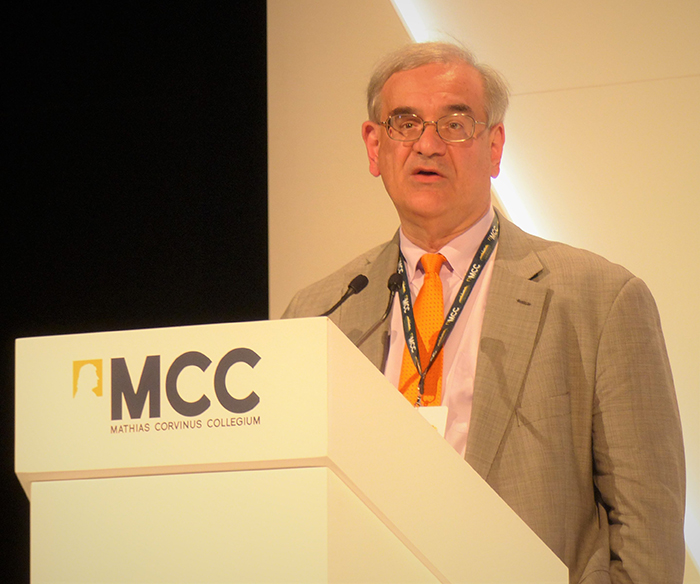 Mark Krikorian of the Center for Immigration Studies speaks at the Budapest Summit on Migration in March 2019. (Photo by Elekes Andor via Wikimedia Commons)

When asked by a caller on CSPAN’s “Washington Journal” about the continued inclusion of content from VDARE, Krikorian defended the decision.

“We send out a weekly roundup of immigration commentary from all sides, including people we don’t agree with,” Krikorian told CSPAN, citing The New York Times’ editorials on immigration as an example. Though he acknowledged that the center linked to “some sites that publish other material” that he viewed as “objectionable,” he posited that such links were needed: “If they’re important sites of immigration news, we include them because the whole point is [to] see the broad spectrum of views and judge for yourself.”