The petition, signed by more than 8,000 people, including members and leaders of anti-LGBTQ hate groups, asks the State Department to “[acknowledge] that human rights start with the family,” according to Ruth Institute director Jennifer Roback Morse. The petition defines family as a child with their “natural mother and father,” to the exclusion of LGBTQ parents and parents who adopt.

The anti-LGBTQ and antichoice right have also been working to appropriate human rights language in an attempt to weaponize it against LGBTQ people and reproductive rights, by claiming that a certain type of family deserves human rights recognition.

The Ruth Institute petition and its presentation to the State Department commission are another example of how the Trump administration has continued to embolden and support anti-LGBTQ hate groups, and how these groups use certain language to mask anti-LGBTQ and antichoice sentiment. 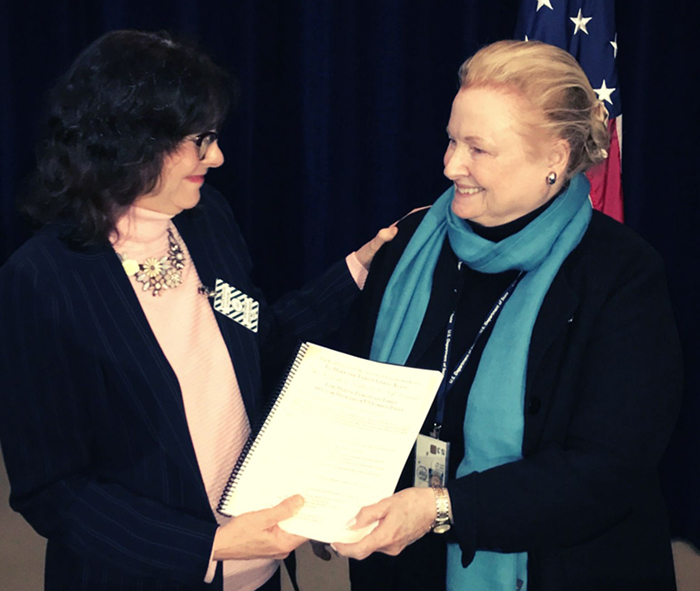 The State Department says the Commission on Unalienable Rights, officially launched in July 2019, is composed of academics, philosophers and activists who will provide the Secretary of State with advice on human rights “grounded in our nation’s founding principles and the principles of the 1948 Universal Declaration of Human Rights” (UDHR), but several of the commission’s members have made anti-LGBTQ statements in the past. The commission’s director, Mary Ann Glendon, is a Harvard Law School professor and former ambassador to the Vatican who opposes abortion and marriage equality.

At the meeting, which was open to the public, Ruth Institute director Roback Morse used the Q&A time to read a statement that urges President Trump and Secretary of State Mike Pompeo to “Make the Family Great Again.” The petition’s coded language places particular emphasis on a particular type of family – one married cisgender heterosexual man to one cisgender heterosexual woman and their biological children – to the exclusion of others.

Signatories of the petition include leaders of anti-LGBTQ hate groups, including Sharon Slater, president of Family Watch International; Michael Voris, president of Church Militant; and Mathew “Mat” Staver, head of Liberty Counsel. Other signatories include Theresa Okafor, director of Foundation for African Cultural Heritage, who has served as a representative for anti-LGBTQ hate group World Congress of Families (WCF); Levan Vasadze, who served as host of WCF’s 2016 conference in Tbilisi, Georgia, and Silvio Dalla Valle of Association for the Defense of Christian Values, which has been a partner organization of WCF.

Roback Morse  presented the petition personally to Glendon and claimed that Glendon “was grateful” for their input, according to an email the Ruth Institute sent out Feb. 26. The petition will be “permanently housed at the State Dept. with the records of the Commission,” Roback Morse stated.

The Commission on Unalienable Rights is supposed to “provide fresh thinking about human rights discourse where such discourse has departed from our nation’s founding principles of natural law and natural rights,” according to an announcement quietly posted in May on the Federal Register.

But Politico noted that according to experts, the word “natural” in such a context is often interpreted to mean “God-given,” which is less common in modern human rights literature and could signal a religious component. “Natural law” is often used on the religious right to oppose reproductive rights and LGBTQ rights, which religious rights activists argue go against the laws of nature.

The petition’s coded language dog whistles the anti-LGBTQ and antichoice right without being overtly anti-LGBTQ, a tactic that has spread with the greater visibility of LGBTQ people over the past few years.

In the Ruth Institute’s petition, language such as “children need their mother and father” appears, and it goes on to say that the Commission should work to recognize

These references – “natural mother and father” and “biological parents” – exclude an array of families, including LGBTQ families, adoptive families and blended families, some of which may not be cisgender and/or heterosexual. The last bullet point is a veiled reference to the Christian Right’s concern over “parental rights” and its claims that parents are being denied the right to raise their children as they see fit. The argument is often used to attempt to deny children access to school materials that deal with comprehensive sex ed and LGBTQ people and issues.

Roback Morse has falsely linked homosexuality to pedophilia and claimed the Catholic Church’s sex abuse scandal is because of gay priests; denied the existence of transgender people and referred to them as “gender confused” and supported the criminalization of affirming healthcare for transgender children.

Ruth Institute launched the petition in September and posted it on LifeSite News, a right-wing antichoice and anti-LGBTQ site that also platforms petitions through “LifePetitions.” The director of advocacy at LifePetitions, Gualberto Garcia Jones, was also present at the petition delivery.

On March 6, a coalition of human rights organizations sued the Trump administration for creating and operating the commission in violation of the Federal Advisory Committee Act (FACA), which was created in 1972 to curb the Executive Branch’s reliance on secretive and superfluous advisory committees.

According to a press release, the lawsuit alleges that the commission was unlawfully created and has been working behind closed doors to “articulate a definition of human rights that is grounded in certain religious traditions” and will thus eliminate rights for LGBTQI individuals (“I" here refers to intersex), restrict sexual and reproductive health and remove protections for other marginalized communities around the globe.

Democracy Forward filed the lawsuit on behalf of Robert F. Kennedy Human Rights, the Center for Health and Gender Equity (CHANGE), the Council for Global Equality, and Global Justice Center.

The Commission’s continued violation of federal transparency law gives special interest groups, like the Ruth Institute, a vehicle to put a federal imprimatur on policies that would strip protections for LGBTQI communities and sexual and reproductive health and rights. Our lawsuit aims to stop the Trump administration from extending its pattern of unlawfully outsourcing policymaking to outside groups, like this Commission, that exclude a diversity of views from its membership and operate outside public scrutiny.