Robin Hvidston, a longtime anti-immigrant activist, is running as a Republican for a California Assembly seat in District 41.

Hvidston is executive director of the nativist group We the People Rising and California state director for anti-immigrant hate group The Remembrance Project.

Her involvement in the nativism movement began in the early 2000s as a member of the Minutemen and “We the People Rising – California Crusaders” (now known as We the People Rising). The Minutemen movement, founded in 2004, is a civilian group of armed vigilantes that is primarily focused on monitoring the U.S.’s southern border with Mexico. 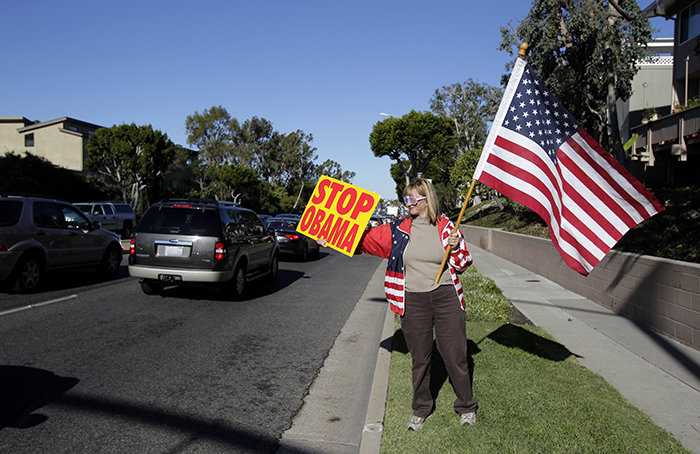 Robin Hvidston, of Upland, California, holds a sign eight years ago along the street during a rally in Corona Del Mar, California, in February 2012. (AP Images/Jae C. Hong)

Hvidston promises to bring her anti-immigrant agenda to the state house. “I support and will be an advocate for the building and maintaining of a border wall to ensure the welfare and public safety of our great state,” she says on her campaign website. In doing so, she is articulating a false narrative promoted by anti-immigrant hate groups, which denigrates undocumented immigrants as inherent security threats to communities.

In a candidate survey, Hvidston characterizes California Senate Bill 54, known as the California Values Act, as one of the state’s greatest challenges, writing, “Securing the border should be a number on [sic] priority as well as the repealing of the Sanctuary State Law.”

SB 54 is statewide legislation that prevents local law enforcement from using money or personnel to investigate or detain individuals based on their immigration status. The legislation has been a major target of anti-immigrant activists, including the Federation for American Immigration Reform (FAIR), who argue that sanctuary cities and states have higher crime rates than non-sanctuary cities and states.

Multiple studies have shown, however, that cities with sanctuary policies actually have lower crime rates than those without such policies. One study conducted by the Center for American Progress and National Immigration Law Center concluded, “Crime is statistically significantly lower in sanctuary counties compared to nonsanctuary counties.”

Hvidston finished approximately 33 percentage points behind Democratic incumbent Chris Holden in California’s March 3 nonpartisan primary. Since Holden and Hvidston were the top two vote-getters, they will square off in November.

As a member of the Minutemen, Hvidston participated in border patrols and served as the group’s national rally organizer. During a 2005 interview about why she joined the Minutemen, Hvidston stated, “Literally anyone from around the globe can come in and take residence as they see fit, including human smugglers, drug runners and terrorists.” Hvidston’s comments displayed her belief in a common tactic espoused by nativist groups: utilizing fearmongering and prejudice to rationalize anti-immigrant activity.

At the time, the protest received national attention because it occurred at the height of the unaccompanied-minor crisis and there was a rise in hateful anti-immigrant rhetoric. Murrieta’s mayor called the incident “a black eye” for the city, but to Hvidston and members of We the People Rising, the event serves as a point of pride.

Last year, Hvidston and others commemorated the five-year anniversary of the protest by gathering at the border patrol facility in Murrieta. The group stood in front of the facility’s gate with signs reading, “STOP THE ILLEGAL BUSES, NOW,” and “STOP ILLEGAL IMMIGRATION.”

Hvidston has also shown a persistent willingness to actively operate in anti-immigrant and nativist circles beyond California.

In 2013, Hvidston participated in the annual Hold Their Feet to the Fire event organized by the Federation for American Immigration Reform ( FAIR ), an anti-immigrant hate group founded in 1979 by white nationalist, eugenicist and founder of the anti-immigrant movement John Tanton . The event brings together conservative radio hosts, anti-immigrant activists and their allies in Congress.

Additionally, Hvidston spoke at the anti-Muslim hate group American Freedom Alliance’s 2017 Conference, “From Gold to Dust: The Destruction of California.” Conference speakers and attendants utilized the event to fault immigrants for California’s troubles. During her comments about We the People Rising’s grassroots activism, Hvidston praised President Donald Trump and then-Attorney General Jeff Sessions, stating that their presence in public office was “very empowering.”

Most recently, Hvidston has been principally active through her roles at We the People Rising and The Remembrance Project. The groups often participate in events together.

As executive director of We the People Rising, Hvidston is consistently present at the group’s various protests. In the past, grassroots activists described We the People Rising’s actions as confrontational, aggressive and disruptive. The group’s advocacy focuses on attending local and state government meetings in favor of anti-immigrant legislation and against pro-immigrant measures.

For example, in a Jan. 16 email, Hvidston informed supporters that members of We the People Rising and The Remembrance Project attended a Los Angeles County Civilian Oversight Commission meeting. Photographs taken at the meeting show the groups’ activists holding up signs reading, “We [heart image] ICE [U.S. Immigration and Customs Enforcement]” and wearing Remembrance Project T-shirts featuring the pictures and stories of individuals killed by undocumented immigrants.

The email included the logistical information of the event and read in part: “DEMAND THAT ALL CRIMINAL ALIENS IN LA COUNTY BE TURNED OVER TO ICE!” This type of rhetoric is in line with the anti-immigrant movement’s “attrition through enforcement” strategy , which argues that the relentless enforcement of immigration laws will stifle an immigrant’s ability to lead a regular life, thereby resulting in the individual’s decision to “self-deport.”