Last year the hate group American Freedom Alliance (AFA) hosted a conference featuring a who’s who of the anti-Muslim movement at the upscale Luxe Hotel on Sunset Boulevard in Los Angeles. This year its “From Gold To Dust: The Destruction of California” conference in the same venue focused on blaming immigrants for most of California’s woes.

The August 20 conference began with AFA president Dr. Karen Siegemund and the 150 or so attendees gleefully celebrating the fact that the Southern Poverty Law Center listed her group as an anti-Muslim hate group, in part due to the vile Muslim-bashing that took place at last year’s gig. While this year’s event attracted more mainstream figures, including politicians and at least two people running for Governor of California in 2018, the speakers predictably attacked transgender people, the Black Lives Matter movement and California’s immigrant population.

Siegemund thanked the crowd for coming out in support of a hate group and defended AFA’s anti-Muslim views stating that AFA is an “organization that speaks out against those who muzzle women, that throw homosexuals off of towers, and all sorts of violence that they do against each other and to us.” Also in the crowd was anti-Muslim activist Nonie Darwish who stated at last year’s conference that, “lying and slander is an obligation in Islam,” and “In Islam, seizing wealth from others is a value.”

The first panel, focusing on California’s public school system, featured Peter Wood, head of the National Association of Scholars. Wood talked about falsehoods promoted by the left, including the Black Lives Matter movement, which he described as, “a false narrative about the United States being organized around the idea of oppressing blacks and nothing else.”

Another speaker on the panel, Lance Izumi, of the Pacific Research Institute named the Council on American Islamic Relations (CAIR) in his speech, which was met with a chorus of boos from the crowd. Izumi took issue with the San Diego school board for working with CAIR on an anti-bullying measure as well as increased education about Islam in the public school system.

This prompted audience members to bring up Truth in Textbooks, an operation run by Roy White, a former leader of the San Antonio chapter of ACT for America, the largest anti-Muslim group in the country. White attended and spoke at last year’s AFA conference where he descried his Truth in Textbooks project in detail, as an effort to effectively purge textbooks that he and others deem too favorable to Islam. These efforts are underway in Texas and California and were resoundingly endorsed by this year’s panelists.

The next panel focused on the environment, where the notorious right-wing conspiracy theory of Agenda 21 was discussed at length. Agenda 21 is a nonbinding sustainability plan developed by the United Nations and signed by 178 countries including the United States in 1992 at the Rio Earth Summit. It lays out steps countries should take to help increase sustainability. Right-wing organizations and politicians have lambasted the plan as a move toward the takeover of the United States by the tyrannical United Nations.

One right-wing organization that has pushed this conspiracy theory for decades is the John Birch Society (JBS) and sure enough, the JBS’s Southern California coordinator, Joe Panzarello, was at the conference passing out literature warning that California “is on the verge of becoming a socialist state,” due to the Democrats. Mike Munzing, an Aliso Viejo City Councilman, used his time on the environment panel to rail against the “horrors” of Agenda 21, stating, “That’s the mother ship, that’s the big overall globalist mother ship of the UN, and that’s what I was fighting.”

Michael D. Antonovich, a longtime member of the LA County Board of Supervisors, took to the stage next where he attacked Democrats, and called the Ku Klux Klan the, “military arm of the Democratic Party,” a line that also received a warm round of applause from the crowd. 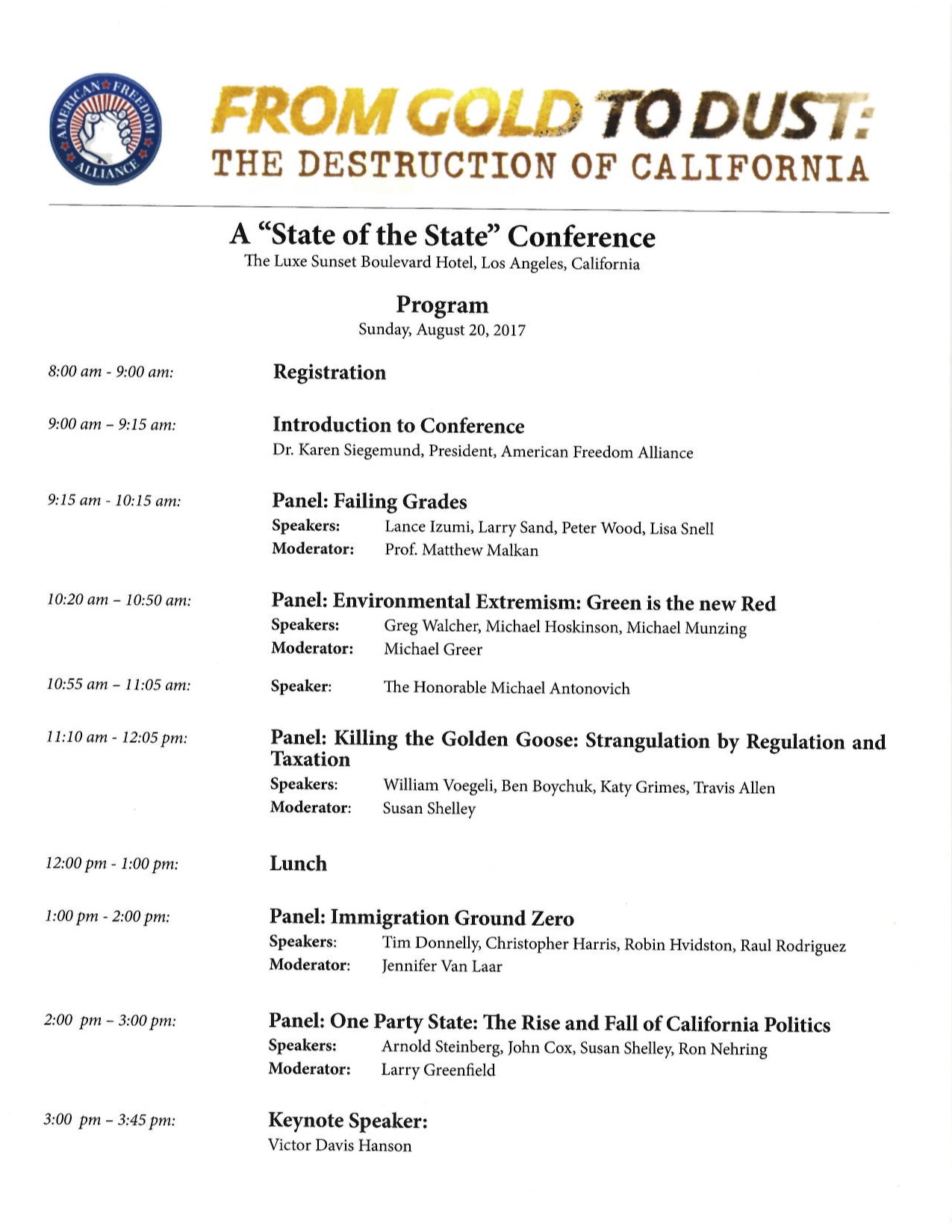 The American Family Association's “From Gold To Dust: The Destruction of California” agenda.

After lunch a panel on immigration commenced, featuring some of the most recognizable anti-immigrant activists in California. The first speaker was Tim Donnelly, a former California Assemblyman, Breitbart contributor and founder of what became the largest chapter of the Minutemen, the rabidly anti-immigrant vigilante group active in the 2000s. Donnelly first joked about having a bumper sticker on his car that reads, “My assault weapon is not illegal, it's just undocumented,” this coming from a man who was cited in 2012 for having a loaded handgun in his carry-on luggage at Ontario International Airport in California.

A clearly upset Donnelly claimed that anyone opposed to immigration was considered “white nationalist.” Donnelly compared the tactics of the left to those of Adolf Hitler before lamenting what he described as massive voter fraud in the state of California. Another panelist, Raul Rodriguez, of the nativist extremist group We the People Rising, also attacked Democrats, calling them “rats” who destroy things.

The major theme of the immigration panel, however, was celebrating the fact that President Trump and the panelists shared similar views. Christopher Harris, a senior Border Patrol agent and director of legislative and political affairs for the National Border Patrol Council’s Local 1613, talked about the Council’s decision to endorse Trump in 2016, stating: “The rhetoric and stances from this President were fantastic,” before adding: “Nobody has ever looked into us before. Nobody has considered us as subject matter experts. And that man looked at us and looked at our union, and not all unions are bad, looked at our union and he said I am going to consider you guys as subject matter experts on securing the border and I’m going to come to you and ask about what should be done.”

The Border Patrol works directly with some of the most established anti-immigrant groups in the country, leaking information directly to them as documented by the immigrant rights group Center for New Community in a 2015 report.

Robin Hvidston, head of We the People Rising and former national rally coordinator for Jim Gilchrist’s Minutemen Project, also praised Trump in her speech. Hvidston said that, “One of the greatest weapons is the election of Donald Trump,” and later said it was “very empowering” to have Trump and Attorney General Jeff Sessions, a longtime ally of the anti-immigrant movement on the side of We the People. Hvidston stated:

Now as far as the sanctuary city movement, we are so excited because we have our President and Attorney General Jess Sessions, can I get a yay! With us on this issue. It’s very emboldening. We got to cities that are not in our camp, most sanctuary cities, but you know what when we go to the podium and speak during public comments and we say that our President and our Attorney General are with us, it’s very empowering.

They keynote speaker for the event was Victor Davis Hanson, a Hoover Institute fellow and author of Mexifornia, a book that romanticizes the California of old, when whites were a large majority of the state's population. Davis Hanson talked about how in parts of California, you can go 10 miles in another direction and it “looks like you’re in a different country.” Hanson also attacked California’s Democrats, saying:

We don’t want assimilation so we’re going to give you as much amnesty, sanctuary states, sanctuary cities, we’ll do whatever we can so you can remain tribal in your outlook. Your tribal racial and ethnic identity is essential, not irrelevant to your character.

Hanson also expounded upon the reconquista conspiracy theory promoted by anti-immigrant activists. It stems from the "Plan Espiritual de Aztlan," a document produced by MEChA (Movimiento Estudiantil Chicano de Aztlan) in the 1960s calling for Chicanos to reclaim land. It is not endorsed by any mainstream groups, but for nativists it serves as the genesis of a conspiracy theory claiming that Latinos want to take back American land for themselves.

Davis Hanson ended by saying,  “The state is regressing into a Third-World country.”  He also attacked undocumented immigrants, essentially claiming they are incapable of being law-abiding residents, stating, “When I came to the States, the first thing I did was break the law, so why would I follow the rules out of necessity now?”