At “Unite the Right” in Charlottesville, Virginia, Azzmador appeared to be everywhere.

With an associate filming him, the neo-Nazi whose real name is Robert Warren Ray gave speeches, tussled with counterprotesters and was charged with illegally spraying tear gas.

Since those days in in August 2017, Azzmador has been nowhere, appearing only on podcasts on The Daily Stormer and occasionally talking with his lawyers in a federal civil lawsuit. 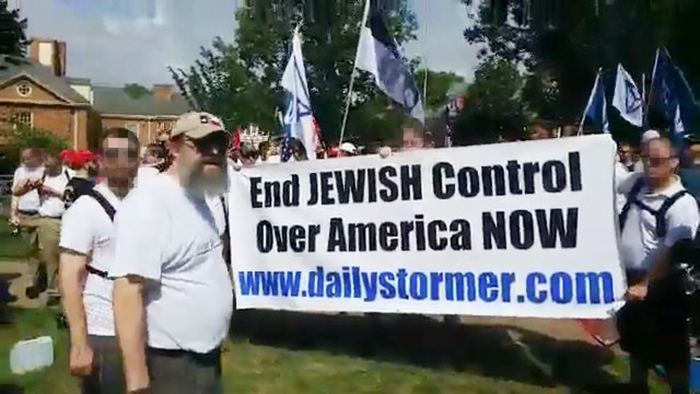 Robert Warren Ray, a neo-Nazi known within white supremacist circles as Azzmador, appears with a sign promoting hate site The Daily Stormer during the August 2017 "Unite the Right" rally in Charlottesville, Virginia. (Photo via Twitter.)

His disappearing act prompted the plaintiffs in the civil suit to petition a federal judge on March 11 to compel Ray to comply with court orders to turn over electronic devices.

Prosecutors and police in Albemarle County, Virginia, have been searching for Ray since June 2018, when he was indicted on a charge of illegally using tear gas during the tiki torch march on Aug. 11, 2017.

Ray did not return three emails Hatewatch sent to an address on file with the federal court.

“This is our war!” Ray growled during a post-rally speech in a safe house the night of the deadly rally. “This has always been our war. And I wouldn’t want it any other way. Death to traitors! Death to the enemies of the white race! Hail victory!”

Ray, a tough-talking neo-Nazi from Frankston in East Texas, was a major player in organizing and executing the rally, along with white nationalist Richard Spencer, Elliot Kline, then the head of Identity Evropa, and white nationalist Jason Kessler.

Neo-Nazis, white nationalists and neo-Confederates from around the country descended upon Charlottesville, a town of about 48,000 tucked into the Blue Ridge Mountains of central Virginia.

At the tiki torch march at the University of Virginia on Aug. 11, Ray and others confronted counterprotesters with chants of “Jews will not replace us!” as pepper spray shot through the air.

The next day, the Unite the Right rally descended into chaos, with counterprotesters fighting with white nationalists, neo-Nazis and other rally participants.

Virginia’s governor declared the rally an unlawful assembly, and the violence continued as participants left downtown Charlottesville. A group of white nationalists and neo-Confederates attacked and beat up a black man in a parking garage, and a neo-Nazi drove his car into a crowd, killing 32-year-old Heather Heyer. James Alex Fields Jr., a 22-year-old from Ohio, is serving life in prison for Heyer’s death. A state court jury found him guilty, and Fields pleaded guilty in federal court.

White nationalists gathered that night at a safe house for a party highlighted by Ray’s speech.

They declared the day a win.

“This event was a huge victory for the Alt-Right,” Azzmador wrote for The Daily Stormer on Aug. 31, 2017, in a refrain that has been repeated on podcasts since. “Don’t believe any of the crap the MSM is peddling.”

Fomenting discord in public often comes with a price.

A group of people on the University of Virginia campus during the tiki torch march sued Ray and nearly two dozen other white nationalists and neo-Nazis in federal court in Charlottesville, seeking damages for the emotional distress and other injuries.

Prosecutors in Albemarle County indicted Ray and his bodyguard, Will Zachary Smith of Nacona, Texas, on a charge of illegally using tear gas.

Two others, known only as “Sunglasses” and “Red Beard,” are being sought by Charlottesville police for allegedly taking part in the beating of DeAndre Harris in a parking garage after the rally disbursed.

“Red Beard” is seen on video wearing a trucker’s hat and sporting a shaggy red beard. “Sunglasses” shows up on a video of the attack on Harris with short-cropped brown hair and a pair of sunglasses.

The identities of the two men remain a mystery. Warrants listing Ray and Smith as fugitives are pending in Albemarle County Circuit Court.

The Albemarle County Commonwealth Attorney’s office and the investigating agency, the University of Virginia Police Department, did not return messages left via email and phone seeking comment.

Ray initially surrendered one computer to the plaintiffs, but since has declined to turn over a second computer, cellphone and passwords to social media accounts.

“It is thus apparent Ray has not satisfied his discovery obligations in this case,” plaintiff’s attorney Robert Cahill wrote in the March 11 motion.

The neo-Nazi organization the National Socialist Movement is also refusing to cooperate. In court proceedings and on the social media site VK, NSM Commander Burt Colucci has made his defiance of court orders and distaste for the plaintiffs plain.

“I am not named as a defendant in that lawsuit and do not have to answer to Uncle Zog, nor can I at this point because I was not there,” Colucci posted on VK on May 14, 2019. "ZOG" is a neo-Nazi slang term that means "Zionist-Occupied Government," referring to the antisemitic conspiracy theory that Jews control the levers of power.

And five defendants in the case have defaulted, including Andrew Anglin, the editor and founder of The Daily Stormer.

But so far, Ray is the only defendant who is a fugitive.

These days, Azzmador mostly exists on podcasts on the neo-Nazi website, ranting about Jews, minorities and others he sees as less than himself and other white people.

Ray most recently appeared on a podcast associated with the Daily Stormer on Feb. 6, when he talked about immigrants and other minorities seeking health care among the coronavirus outbreak.

His account on Gab, a social media platform favored by white nationalists and neo-Nazis, has been quiet since March 2018 – three months before he was charged.

In podcasts, Ray refers to Texas agencies as “ours,” but doesn’t say where he is or mention his actions in Charlottesville, the lawsuit or the warrant for his arrest.

Since Charlottesville, he hasn’t made any high-profile appearances at rallies or large gatherings.