Amid ongoing protests against police brutality spurred by the recent death of George Floyd in Minneapolis, cities from Richmond to Tampa are removing divisive symbols of the Confederacy. On Monday, one angry caller told police in Birmingham, Alabama, he planned to kill police, protestors and the city mayor if they proceeded with plans to remove a monument in the city.

The incident demonstrates how far some proponents of the Lost Cause narrative are willing to go to keep symbols of white supremacy in place.

In an expletive- and slur-ridden call to 911, a caller warned a Birmingham police dispatcher, “If you take down that statue in Linn Park, Confederate Soldiers and Sailors, I’m going to come down there with my AK-47 and start blowing the damn pigs away and the protestors, everybody.

“I am going to assassinate [inaudible] Randall Woodfield [sic] and kill that dead n****r... I’ve got a bomb set right down there that’s about to go off, you hear me…You better lay off that statue right now, you better back the f--- off you hear me?”

The caller refused to identify himself to police, but a spokesperson for the Birmingham Police Department told Hatewatch they have a suspect in custody. Brian Stephen Vest, 49, was arrested in Warrior, Alabama on Wednesday, June 3 in connection with the call. The Jefferson County Sheriff’s Office and Warrior, Alabama police assisted in executing the felony warrant.

Online arrest records show that Vest is currently being held as a pretrial inmate on a $30,000 bond for making terrorist threats. 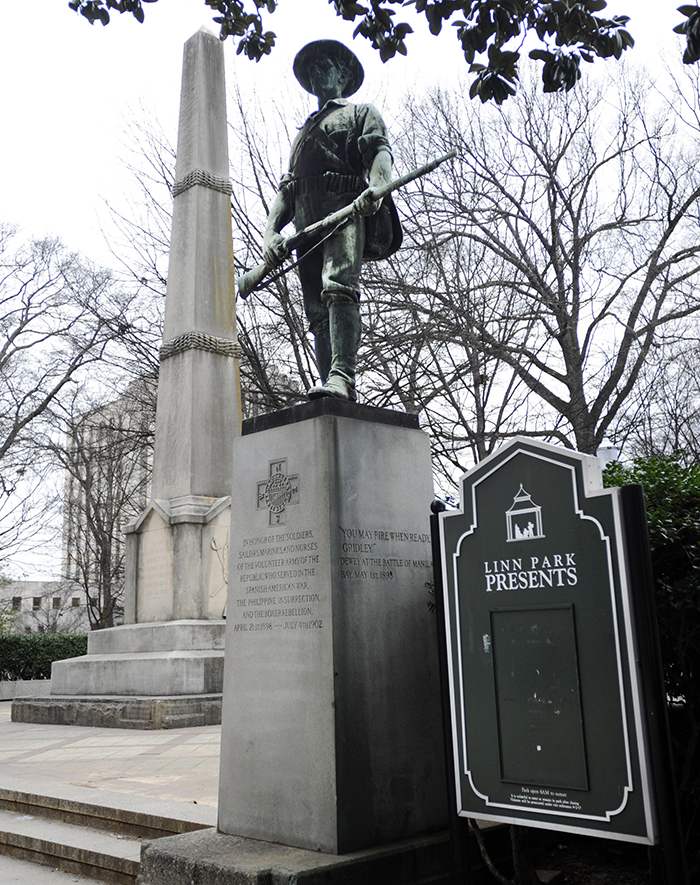 In this Feb. 9, 2016 file photo, a statute memorializing veterans of the Spanish-American War and other conflicts stands near a Confederate monument in Linn Park in downtown Birmingham. The Alabama Supreme Court ruled in 2019 that a state law that prohibits cities from removing Confederate monuments will remain in effect. Despite death threats, Birmingham Mayor Randall Woodfin ordered the obelisk removed, and it was taken down June 1. (Photo by AP Photo/Jay Reeves)

Birmingham’s Linn Park was the site of intense protests Sunday night as rage over a nationwide spate of deaths of unarmed Black Americans at the hands of law enforcement sparked a protest, then a riot. The “Soldiers and Sailors” monument has been a source of ire and pain for many residents of a city that is steeped in the history of segregation and Black Americans’ fight for civil rights, often in the face of shocking police brutality. On Monday, Birmingham’s Mayor Randall Woodfin promised to remove the monument at the urging of protestors.

In spite of death threats, Woodfin kept his word, defying state laws intended to keep the monument up in the process. On Monday night, work crews took down the giant stone obelisk, leaving an empty, graffiti scrawled pedestal behind.

The next day, Alabama’s attorney general filed a civil suit against Woodfin for violating the state’s monument preservation law.

As reported by ABC News, Woodfin said, "It's probably better for this city to pay this civil fine than to have more civil unrest."

Though some municipalities, Birmingham among them, have decided now is the time to remove painful public tributes to America’s slaveholding past, the handful of monuments taken down by cities represent a small portion of the 1,747 statues identified in an updated version of the Southern Poverty Law Center’s report on Confederate memory in the United States, Whose Heritage.

As decisions regarding the future of memorials to the Confederacy are made, white nationalist and neo-Confederate hate groups and members are likely to respond. Previous pushes to remove Confederate iconography from the public square resulted in loud and ferocious protest, often accompanied by violence.

In June 2015, then-Governor of South Carolina Nikki Haley decided to remove a Confederate flag from the Columbia statehouse grounds following the Charleston Emmanuel AME church massacre. The move sparked an uproar that spawned in 356 pro-Confederate rallies before the year ended.

The resulting furor over the removal of the Confederate flag grew alongside a growing white nationalist online subculture now known as the “alt-right.” Together, they burst into mainstream consciousness on August 12, 2017. The planned “Unite the Right” rally – fomented by opposition to the city of Charlottesville’s attempts to remove a statue of Confederate General Robert E. Lee from a park in the city’s center – culminated in the death of Heather Heyer, a counterprotester, at the hands of James Alex Fields, a white nationalist rally-goer.

The same day, several rallygoers with the neo-Confederate hate group the League of the South were involved in the gang-beating of a Black man, DeAndre Harris, in a nearby parking garage. League member Tyler Watkins Davis is currently serving a 25-month prison sentence for his role in the attack.

Members of the League of the South have continued to protest at the site of Confederate statues. Jessica Reavis, a League officer from Virginia, was found guilty of illegally carrying a firearm at an October 2019 protest in Pittsboro, North Carolina.

On Sunday, May 31, Jeffrey Alan Long, a member of the Sons of Confederate Veterans’ Mechanized Cavalry with ties to the League, was arrested for discharging a firearm near a protest at a Salisbury, North Carolina Confederate statue.

This history tells us that the current spate of Confederate monument removals will not go unchallenged by groups devoted to the preservation of symbols of white supremacy.

Hatewatch has not yet determined whether Brian Vest has ties to organized hate groups.

In related news, reports have swirled that a group associated with the Ku Klux Klan plans to march in Birmingham. Hatewatch research analysts track Klan groups and have so far been unable to substantiate rumors of an organized march planned by KKK members in response to the Linn Park statue removal or ongoing Black Lives Matter protests. If new information comes to light, it will be reported on the Hatewatch blog.