The white nationalist non-profit VDARE hosted a livestream Tuesday in Washington, D.C., in which the group lied to antiracist demonstrators, saying they were reporters with “VICE Canada,” before urging them to say and spell out their names.

VDARE’s efforts to broadcast the names and faces of individual protesters who attended the demonstration comes on the heels of President Trump’s promises to designate antifa protesters as terrorists. Antifa is a loosely defined term used to depict a style of left-wing protest. VICE Canada is the Canadian edition of the news and culture website of the same name.

“Sir, would you like to say a few words? We’re VICE Canada,” the host of VDARE’s stream said to one demonstrator, as an example of the approach the group used to contact protesters. 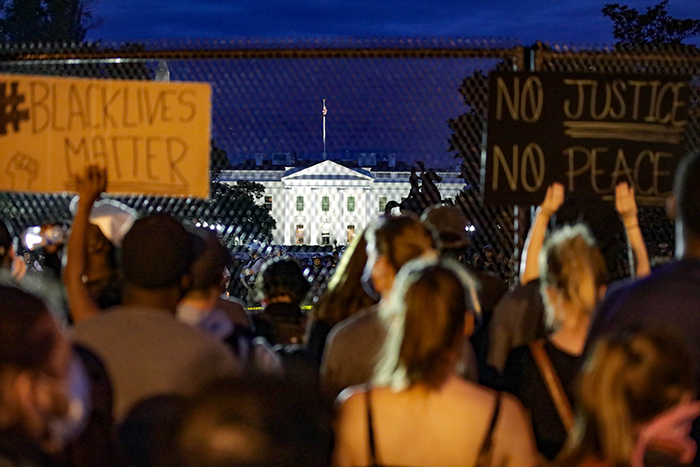 Thousands of peaceful demonstrators holding banners gather Tuesday in front of the White House in Washington for the fifth consecutive day to protest the death of George Floyd, an unarmed black man who died May 25 after being pinned down by a white police officer in Minneapolis. (Photo by Yasin Ozturk/Anadolu Agency via Getty Images)

The early afternoon livestream was hosted by two VDARE activists at the National Mall, where demonstrators gathered to protest police violence, racism and the Trump administration. VDARE has since removed the video, but Hatewatch viewed it live and documented it. Hatewatch was unable to immediately identify the VDARE activists who operated the stream. VDARE’s founder is Peter Brimelow. He did not immediately respond to a request for comment.

Said a spokesperson for VICE Media Group: “This livestream video is in no way affiliated with VICE Media Group. Any claim by individuals in the video that they represent VICE is false. We strongly condemn any such deception, especially in an environment where accurate and objective reporting is so important.

White nationalists have attempted similar forms of deception in response to the widespread antiracist demonstrations and civil unrest that have swept across the U.S. since the killing of George Floyd. The white nationalist group Identity Evropa (renamed American Identity Movement) posed as “antifa” on Twitter Sunday, urging protesters to “move into the residential areas… the white hoods… and take what’s ours,” a spokesperson for that website told NBC News.

VDARE’s viewers on YouTube questioned the legality of what VDARE did as it happened. “I’m sending a copy of this to VICE Canada so they can sue you for doxxing [sic] protesters in their name,” a commenter with the pseudonym “Bubonic4u” wrote. Doxing refers to the act of publishing private information about people online.

Hatewatch tracked down one of the protesters who unwittingly gave her name to VDARE’s audience. Dawn Eden Goldstein, a D.C.-based theologian, told Hatewatch a man and woman approached her, claiming to represent VICE Canada. She said the pair then asked her why she supported the protests and if she had a statement for “Mr. Trump.” Goldstein told Hatewatch she would not have voluntarily given out her identity to an audience that likely included far-right extremists.

“The press and freedom of the press is something that’s sacrosanct in any democracy, particularly it is sacrosanct in the United States. What these people did in posing as the media that they weren’t – it harms the very cause of truth itself. It harms people’s trust in the media,” Goldstein said.

Founded in 1999, VDARE’s influence has risen under Trump’s presidency. Hatewatch previously reported that White House senior adviser Stephen Miller forwarded VDARE’s content to Breitbart News in 2015 in an effort to shape their reporting on the subject of non-white immigration into the U.S. Miller, along with white nationalist Richard Spencer, invited VDARE founder Peter Brimelow to speak at Duke University in 2007, while Miller was a student there. In August, the Department of Justice, under the stewardship of Bill Barr, forwarded a link to a VDARE post that included “antisemitic attacks” on immigration judges in the DOJ morning news briefing, Buzzfeed reported.

VDARE has been accused of deliberately deceiving people before this incident. Facebook banned VDARE in May after uncovering fake accounts and “coordinated inauthentic behavior” in a network of pages linked to their group.