The head of the racist skinhead Aryan Strikeforce group is going to prison for 20 years for his role in a drug distribution conspiracy.

A judge in Williamsport, Pennsylvania, handed down the sentence for 40-year-old Joshua “Hatchet” Steever of Manville, New Jersey, on July 7.

The two-decade stretch is the longest handed down in the dismantling of the gang, which is associated with Combat 18, a violent group designated as a terrorist network in multiple countries. It is closely associated with a faction of the international network known as Blood & Honour. 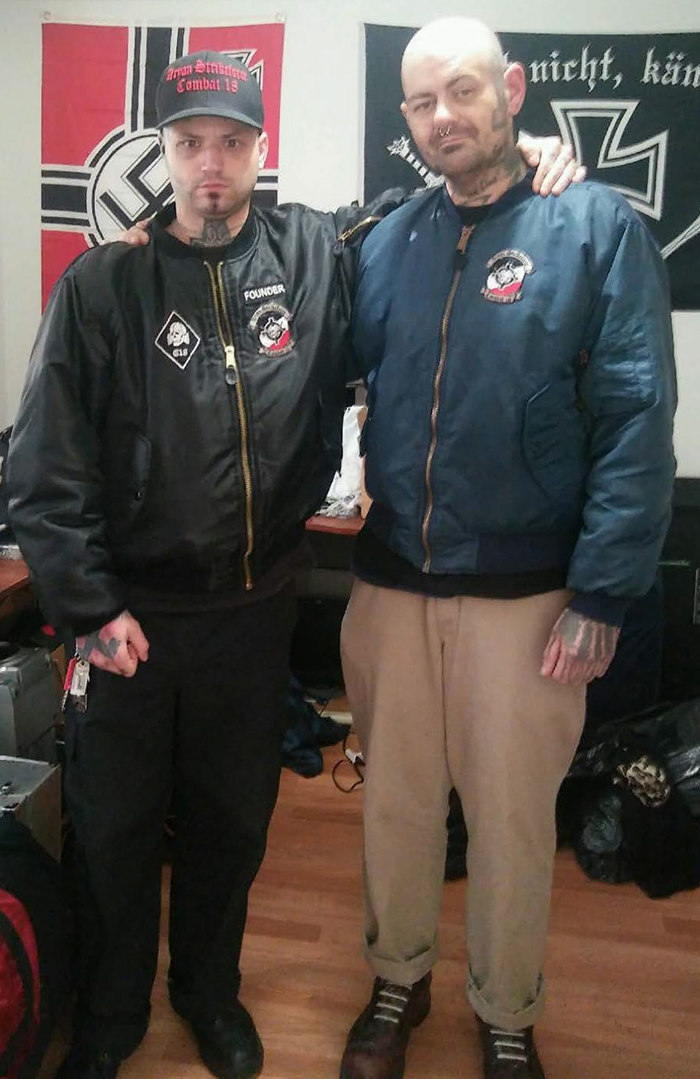 Aryan Strikeforce/Combat 18 considered themselves willing to and capable of using violence, as the group’s website put it, with the “goal to protect the honour of our women, children and the future of our race and nation.”

Combat 18, which subscribed to the “leaderless resistance” philosophy preferred by some militia groups, drew its name from Adolf Hitler. “A” and “H” are the first and eighth letters of the alphabet.

Five other members of Aryan Strikeforce were also sentenced to federal prison for their roles in the conspiracy before federal agents and prosecutors made arrests and issued indictments in 2017.

A judge in March 2019 sentenced Steven Daniel Davis of Bumpass, Virginia, to 30 months in prison for transportation and possession of a firearm by a felon.

“The group has been effectively dismantled,” said Dawn Clark, a spokeswoman for the U.S. Attorney’s office in Williamsport, Pennsylvania.

A drug and gun conspiracy

Members of Aryan Strikeforce, some of whom had criminal records, were fond of racial epithets and violence.

Hatewatch used court filings, including the indictment, motions, exhibits, interviews with the FBI and transcripts of recorded conversations to reconstruct some of the actions by Aryan Strikeforce as they looked to move guns and methamphetamine between Pennsylvania and Virginia.

Steever founded Aryan Strikeforce in 2013 after being forced out of another white nationalist group called the Aryan Terror Brigade.

Prosecutors allege that the group got and stored firearms in homes in Pottery County and Allentown, Pennsylvania, and in Phillipsburg, New Jersey.

Among the weapons cited by prosecutors in the case were several 9 mm pistols and a Western Auto 12-gauge shotgun.

Prosecutors said the group laundered the drug proceeds by taking the cash and buying pre-paid Visa gift cards at a variety of stores.

As recounted in the recorded conversation in April 2017, Aryan Strikeforce members weren’t afraid of violence.

“This other guy stuck me, knocked my [unintelligible] off,” Baird said.

“Henry almost fucking put a bullet in someone last night too,” Steever said.

“What?” the informant asked.

“Fucking kid. Fucking kid was hanging out with us,” Steever responded.

The group would meet at public places, such as Cracker Barrel restaurants or coffee shops, to discuss buying and selling guns and methamphetamine.

Lough, speaking with an informant during a recorded conversation on March 30, 2017, near Harrisburg, Pennsylvania, also met with Baird, and Steever.

Lough said he was ready to start hauling weapons.

“You call me, I’ll be there … It will be very, very rare if I had to turn something down,” Lough said. “That’s why I always make sure people know, call me, ‘cause I always need the money … I’m always ready to go.”

The group sold simulated methamphetamine to undercover FBI agents and purchased guns throughout 2016 and part of 2017.

The group collected anywhere from $700 to $4,000 for the methamphetamine deliveries.

The FBI arrested the members of the group in April 2017, ending the drug and gun scheme.

After being arrested, Baird spoke at length with FBI agents on April 13, 2017. During the interview, Baird gave agents names, descriptions of people and details about the plans to buy gift cards to launder the proceeds of the drug sales.

Gone was the tough talk of street fights and gun deals that prosecutors said would back future violent acts.

“Baird advised that he possessed the .357 Taurus revolver for protection, and that he had been scared for his life recently,” Special Agent Kyle D. Moore noted.

PennLive reported that Steever’s attorney, Kyle Rude, said the gang members weren’t out to hurt anyone with the deals.

“They were in it for the money,” Rude told the court.