Jack Posobiec, a correspondent for One America News Network (OANN), brought a pseudonymous disinformation poster onto the air without providing context of that person’s hateful and terroristic beliefs, Hatewatch found.

Posobiec produced a segment for OANN in September 2018 in which he interviewed “Microchip,” who was at that time a pseudonymous contributor to the white-supremacist-friendly website Gab. Microchip achieved notoriety during Trump’s 2016 run for president for his involvement in a number of high-profile disinformation campaigns. Posobiec also linked his Twitter followers to Microchip’s Gab feed at least five times after the interview was aired, archives show. Microchip posted statements to Gab prior to being interviewed on OANN that celebrated Hitler, and alluded to terrorism and murder.

“I wish [Atomwaffen Division] had survived. They did great work in scaring the living shit out of everyone,” the person behind the Microchip Gab account wrote on July 24, 2018, across two posts. “We need more hatred and fear. Everyone needs to stop being such f------ p------.” 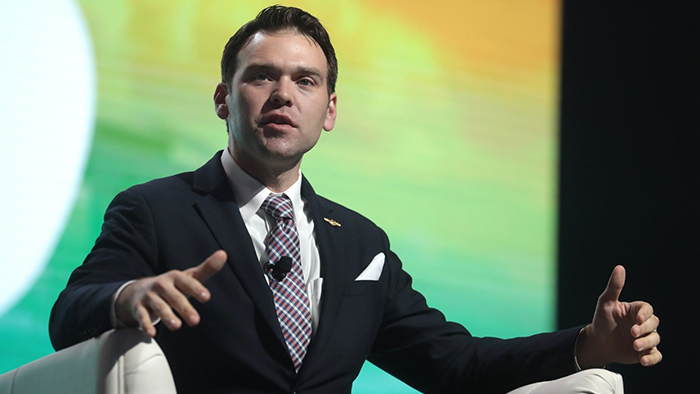 Atomwaffen Division is a terroristic neo-Nazi group responsible for at least five murders in the U.S. since 2017. On July 14, John Cameron Denton of Atomwaffen Division, who goes by the online moniker “Rape,” pled guilty to charges related to “swatting” journalists, which means calling police on false grounds to the homes of people in an effort to provoke accidental violence against them.

Hatewatch documented Microchip’s Gab posts extensively at the time Posobiec brought him onto the air, and they are virulently hateful. In addition to writing “Hitler 2.0 is coming and it is glorious,” he called black Congresswoman Maxine Waters a “Bush n----r ,” in response to President Trump saying she had a “low IQ.” In another Gab post, Microchip expressed hatred for LGBTQ people, Jews and people of color by employing a litany of slurs. Hatewatch has chosen not to reproduce the hatred and profanity in this post, but readers can view a screenshot of the full content. He also wrote on Gab that “racism and hatred is the future.” OANN noted to Hatewatch that their segment featuring Microchip is “active.” It can be found on their YouTube page. Posobiec, however, appears to have deleted a tweet promoting it to his followers.

Microchip called Posobiec his online ‘buddy’ and they spread disinformation together

Posobiec based the OANN segment with Microchip on claims the pseudonymous personality made about inventing “QAnon,” along with the help of one other person. No one has been able to prove Microchip’s claims, which are based on screenshots he said were taken on the gaming app Discord. QAnon is a conspiracy theory modeled loosely on the idea that a government official with inside information is speaking to Trump supporters through secret online channels. Posobiec protected Microchip’s identity in the segment OANN aired by using an illustrated image of a man in a red hat and allowing him to speak through a voice distorter. 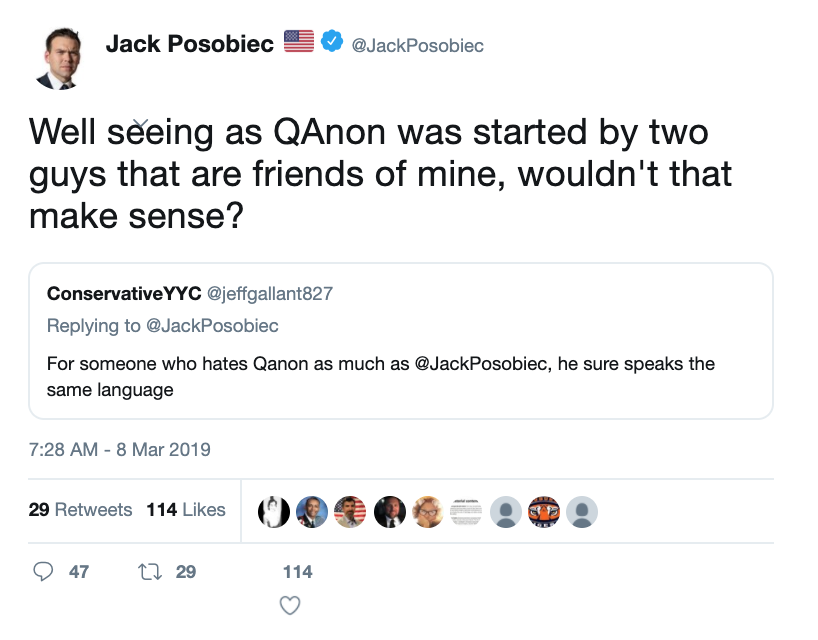 Posobiec posted this tweet in March 2019, referring to the creators of QAnon as "friends." Microchip described Posobiec to Hatewatch as an online "buddy." (Screenshot via Twitter)

Posobiec has an apparent personal connection to Microchip that goes beyond interviewing him on OANN. Posobiec referred to what he claimed was the creator of QAnon as his friend in a tweet he published on March 8, 2019. He made the claim six months after he produced the segment reporting that Microchip created QAnon with another person. Posobiec and Microchip both promoted fake antifa Twitter accounts as part of a disinformation campaign intended to discredit the leftist protest movement, Buzzfeed reported in March 2017.

“Well seeing as QAnon was started by two guys that are friends of mine, wouldn't that make sense?” he wrote in response to a comment that he “speaks the same language” as QAnon.

Hatewatch reached out to Microchip over the gaming app Discord to ask him about that statement. He described Posobiec as his “buddy just through the internet” and said the OANN correspondent “doesn’t know who [he is],” regarding his true identity. 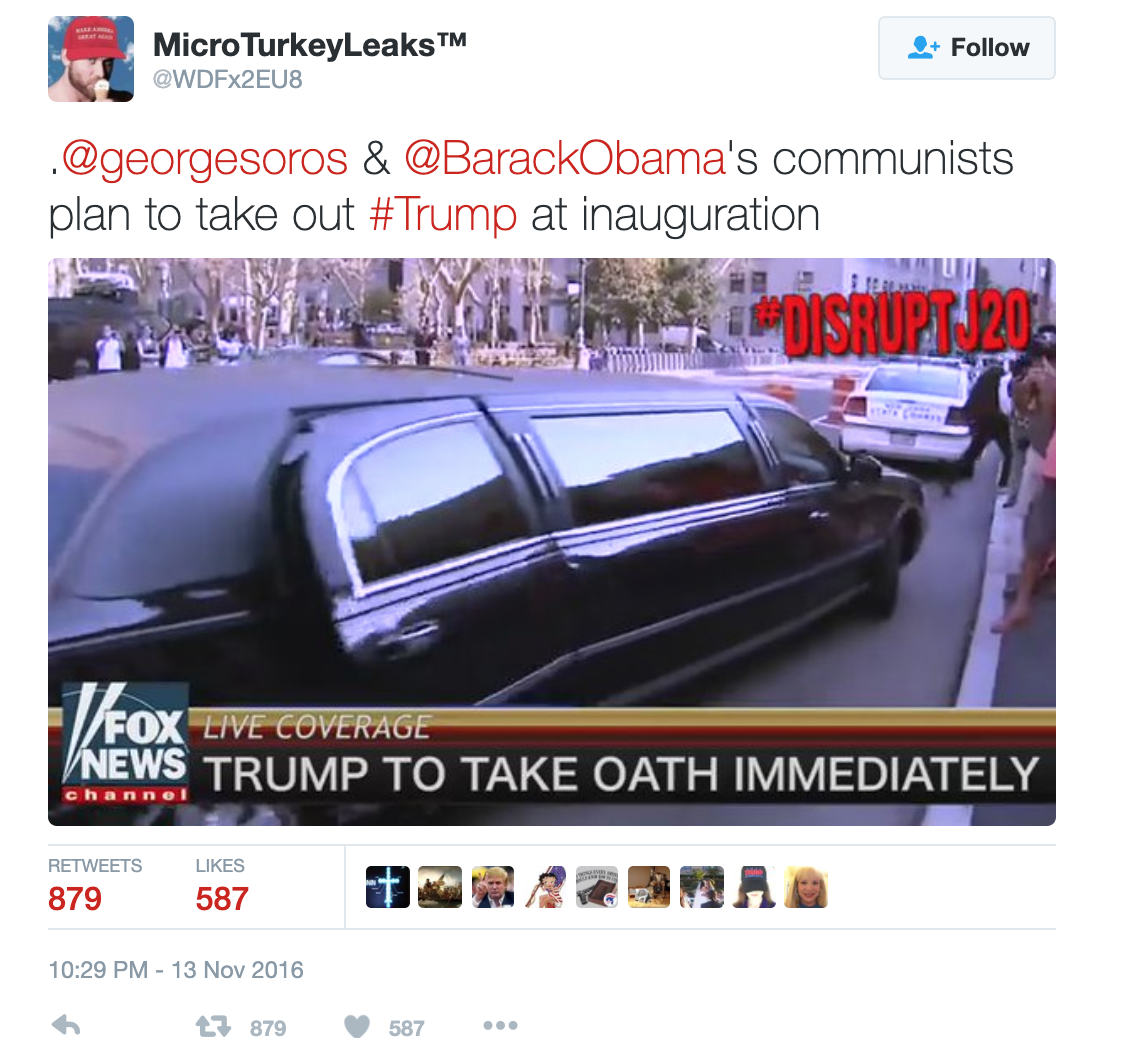 In addition to celebrating Hitler and neo-Nazis, Microchip gained notoriety for repeatedly publishing disinformation on social media. (Screenshot via Twitter)

Microchip has published disinformation for years. He became a fixture on Gab after being banned from Twitter repeatedly. In March 2016, he helped make the hashtag #CruzSexScandal the top trending topic on Twitter, referring to a fake story about the Texas senator, who was then opposing Trump in the 2016 Republican presidential primary. He promoted #Pizzagate along with Posobiec. He also promoted a fake story that Barack Obama and George Soros planned to assassinate Trump at his inauguration.

Posobiec’s promotion of Microchip’s Gab account is one of many instances Hatewatch found of the OANN correspondent boosting content from fringe websites that are heavily frequented by white supremacists to his substantial Twitter following. 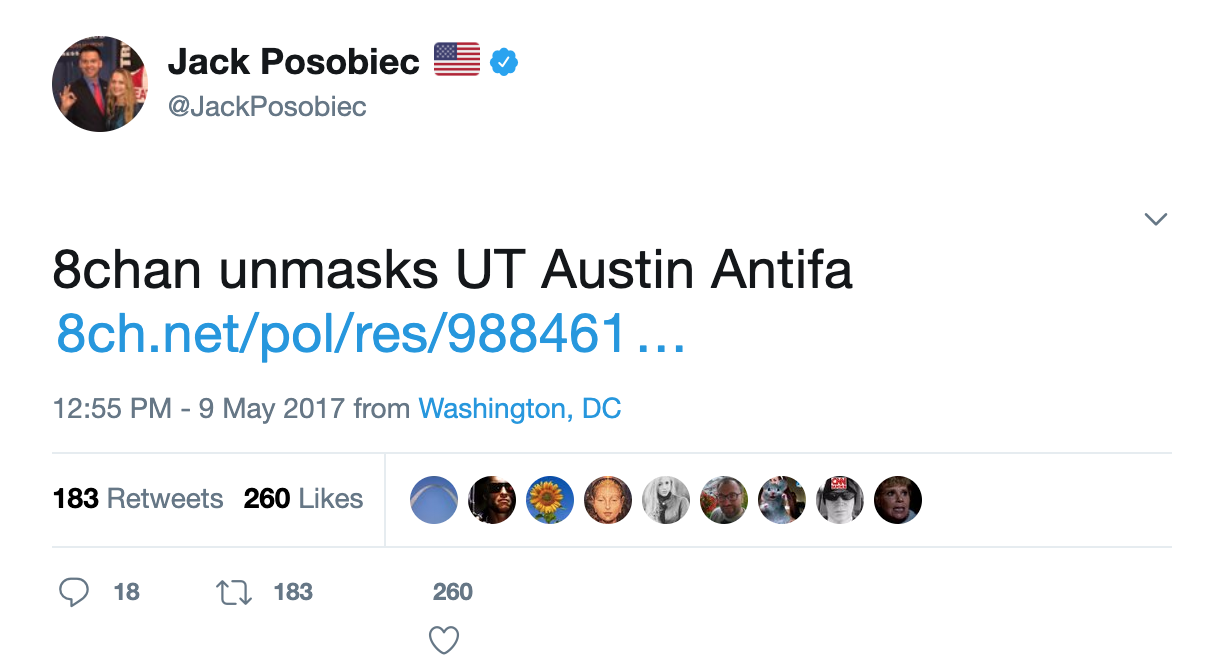 Posobiec has directed his followers to fringe white supremacist websites. in May 2017, he linked to 8chan, which gained notoriety for its extreme, terroristic user base. (Screenshot via Twitter)

On May 9, 2017, roughly one year before he started with OANN, Posobiec directed his followers to a link on 8chan’s “pol,” a forum that was at that time dominated by antisemitic, racist and terroristic users. Two months later, on July 4, 2017, Posobiec referenced 8chan again, announcing that the forum had published the personal information of CNN reporters. Far-right terrorists posted apparent manifestos to 8chan, making the forum globally infamous. Cloudflare, a hosting service, ultimately terminated the site after the El Paso Wal-Mart terror attack, in which one of its users was suspected of killing 23 people in a shooting spree.

In the Posobiec post alerting his followers to the publication of private information about CNN reporters, a Twitter user replied with the name and address of CNN employees such as Wolf Blitzer, Don Lemon and Brian Stelter. (Hatewatch is linking to a screen shot of Posobiec’s tweet rather than the archive of it to avoid republishing that private information.) Someone with the handle @DarkTriadMan wrote, “#DoxCNN” and “#CNNKarma” underneath Posobiec’s tweet. “8chan is so ruthless Google delisted them,” a Twitter user with the handle @SonofLiberty54 wrote in the replies to Posobiec’s tweet.

As recently as May 15, Posobiec promoted to his Twitter followers an article about antifa from an obscure website operated by “Eric Striker.” Eric Striker is the pseudonym of Joseph Jordan, a neo-Nazi from Queens, New York, who attended the “Unite the Right” rally in Charlottesville, Virginia, and once wrote hundreds of posts for the neo-Nazi website The Daily Stormer. Jordan once wrote that Jews “need to be driven out of America.” Like Posobiec, Jordan promoted #Pizzagate. At the time Posobiec tweeted out the post linking to Jordan’s website, only a handful of other, much smaller Twitter accounts had done so, Hatewatch determined through a review of timestamps. Posobiec’s link to Jordan’s website was ultimately retweeted hundreds of times, causing the article to spread.

Posobiec responded to a request for comment on this series in April by claiming to have called the FBI on Hatewatch. In the first three stories in this series, Hatewatch detailed Posobiec’s connections to the white supremacist movement, his embrace of internet slang used by white supremacists to target Jews with harassment, and his connections to and promotion of Poland’s neo-fascist movement. He did not reply to a voice message Hatewatch left on July 8 offering him an additional opportunity to comment on the stories in this series.

Robert Herring, the CEO of OANN, portrayed Hatewatch’s effort to report on Posobiec’s ties to the white supremacist movement as “a guilt by association fallacy” and “a typical smear tactic” in April. Herring did not respond to a follow-up email Hatewatch sent on July 22 after the publication of the first three stories in this series.