White nationalist organization The Right Stuff (TRS) announced Wednesday the formation of a political party called the National Justice Party, which includes a cluster of known white supremacists and has a platform shaped around a conspiracy theory suggesting that whites are being deliberately eliminated in the U.S.

TRS spawned from a podcast-based website founded by Mike Peinovich, who for years went by the stage name “Mike Enoch” until antiracist activists exposed his identity in 2017. Peinovich and TRS leaders organize secretive meetups, which they call "pool parties," for white nationalists throughout the country. The group promoted the candidacy of Donald Trump in 2016 through podcasts and traffic in Holocaust denial and other antisemitic conspiracy theories. 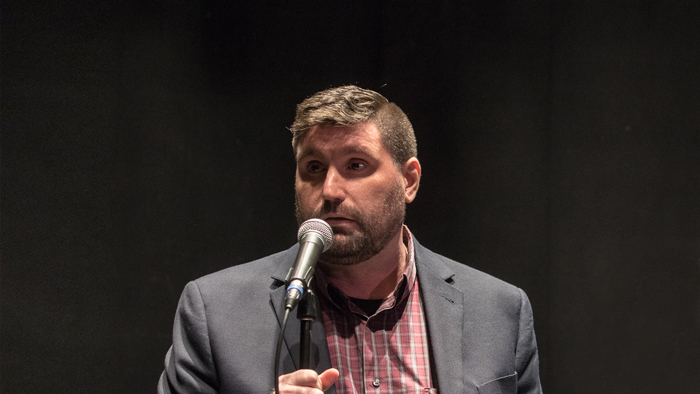 Mike Enoch from The Right Stuff speaks at a press conference with Richard Spencer on Oct. 19, 2017, at the University of Florida in Gainesville, Florida. (Photo by Evelyn Hockstein for The Washington Post via Getty Images)

Peinovich and his allies teased the formation of The National Justice Party on their flagship podcast “The Daily Shoah” for weeks before Wednesday’s announcement. On Aug. 17, a channel on the extremist-friendly messaging app Telegram associated with former State Department official Matthew Q. Gebert posted what it described as “the kickoff video to the National Justice Party’s inaugural assembly.” Gebert served as a foreign affairs officer assigned to the U.S. State Department’s Bureau of Energy Resources until Hatewatch revealed his identity in August 2019 and he was suspended from his job.

The montage video Gebert’s channel posted used clips of news footage to hint at TRS’s familiar grievances, which include non-white immigration, declining white birth rates, the perceived victim status of working and poor whites, and the wealth and power of Jewish people such as billionaire Republican donor Sheldon Adelson. At the same time, a website promoting the National Justice Party went live with a countdown to an official announcement. A Twitter account associated with Joseph Jordan, a neo-Nazi of Latin American heritage who goes by the stage name “Eric Striker,” also promoted the countdown.

The countdown ultimately gave way on Wednesday night to a 30-minute video recording of Peinovich speaking in what looks like a barn to an unseen audience. Dressed in a blue suit and lumbering back and forth over a podium, Peinovich delivered an extemporaneous speech, occasionally drawing excited yells from audience members.

He attempted to explain, “one other problem with the GOP –” when an audience member interrupted by screaming, “Jews!” Peinovich chuckled and answered, “You beat me to it.” In addition to targeting Jews in his speech, Peinovich also expressed anger at Black people, whom white nationalists view as inferior, and also took aim at antiracist demonstrators, a favored topic of discussion on his podcasts.

Peinovich noted in the speech that the announcement of his party was deliberately held close to the three-year anniversary of the deadly Aug. 12, 2017, “Unite the Right” rally in Charlottesville, Virginia, at which he was once slated to speak. Unite the Right was canceled before it started amid widespread outbursts of violence. Virginia declared a state of emergency as a result of the violence, and James Alex Fields, a neo-Nazi who marched with the group Vanguard America, rammed his car into a group of people, murdering 32-year-old antiracist demonstrator Heather Heyer. In December 2018, Fields was convicted of first-degree murder for his actions.

﻿“James Fields was a template for this [injustice],” Peinvoich said in his speech of the convicted killer. “A young man had his entire life ahead of him. Unless we win, this man will spend the rest of his life in jail. Are we going to let that happen? No, absolutely not.”

The white nationalist also described what happened in Charlottesville that day as “one of the most important political events … of the last few decades.” At the event, hundreds of people aligned with the cause of white nationalism marched, some carrying Nazi flags and other white supremacist symbols.

“Charlottesville was important because it laid bare every issue that we are dealing with now. We foresaw it. We saw what was coming and we tried to warn America. We raised the red flag or … maybe some other flags,” Peinovich said.

'Chairmen' take the stage, including a former member of National Alliance

Hovater first made headlines after he was featured in a controversial profile in The New York Times, which critics depicted as being too soft on the subject’s racist and antisemitic beliefs. Hovater participated in multiple events with the now-defunct Traditionalist Worker Party, alongside Jordan.

Jordan, a man from Queens, New York, has repeatedly served as a subordinate figure in the white supremacist movement, creating propaganda for a number of more prominent extremists, including Matthew Heimbach, Andrew Anglin of The Daily Stormer and most recently Peinovich of TRS. Jordan currently publishes a junk news website called National Justice, which focuses acutely on antifascist activists, among other familiar fixations.

McKevitt, in addition to co-hosting a podcast focused on white nationalist fatherhood with the ex-State Department official Gebert, was once a member of a Confederate-flavored spinoff of TRS called Identity Dixie. He operates under the alias “Potato Smasher” while creating propaganda. His wife Allyson McKevitt is also in the movement.

Conte is a former substitute teacher and coach at a Catholic High School in Maryland. He briefly served as the director of three of Richard Spencer’s operations: Washington Summit Publishers, Altright Corporation, and the National Policy Institute, before resigning from all three in 2018. Conte was arrested for fighting with counterprotesters before a speech Spencer gave at Michigan State University in March 2018. In January 2019, Conte and a group carrying antisemitic signs crashed a Pittsburgh antiwar protest.

Warren Balogh attended Unite the Right and joined Conte in filing suit against city and state officials related to their handling of the event. More recently, the younger Balogh authored a February 2019 op-ed in the Pittsburgh Post-Gazette titled “Raising an Alarm for Freedom of Speech” expressing his concern that federal investigations into hate speech might yield arrests.

Alan Balogh, Warren’s father, has decades-long ties to the white power movement. The elder Balogh once belonged to National Alliance and a related splinter group of what was once the largest organized neo-Nazi group in America. A photograph published to an extremist website features a younger Balogh standing with National Alliance founder William Luther Pierce, National Alliance member and convicted child pornographer Kevin Strom and another man listed as Gerry Sykes.

The photo is dated 1984 on that site. Southern Poverty Law Center obtained records from National Alliance, which include sales receipts from 2007 and 2008. The receipts list Balogh’s Hillsboro, West Virginia, residence as the shipping location for several white nationalist texts purchased from that group.

A biography of William Pierce quotes him as describing Alan Balogh as a Philadelphia Unit Leader who “would do things like staple Alliance placards to telephone poles, and he would punch out anybody who gave him a bad time while he was doing it.”

No FEC filings and a history of abandoned projects

Hatewatch staff searched for Federal Election Commission (FEC) filings for the National Justice Party. The group has not yet filed documentation for any committees and has not received political donations. The National Justice Party is not listed as a registered political party in any of the states where party members reside, including New York, Virginia, West Virginia, California, Texas or Florida.

Peinovich and his allies have a history of promoting projects that do not advance beyond the planning stage. In early 2019, Peinovich and Jordan promoted “Testudo Legal Defense Network,” which they and an unidentified guest described as being a legal team that white nationalists could summon to defend their reputations. It is unclear what happened to the “Testudo Legal Defense Network,” and Hatewatch was unable to find evidence of its existence online. A different guest who goes by the moniker “Wild Rich” announced similar plans on Gebert and McKevitt’s podcast in late 2019. “Wild Rich” described his endeavor as a white nationalist civil rights organization, which he nicknamed the “SS SPLC,” a pun referring to the paramilitary organization operated by the Nazis during World War II. Hatewatch was unable to find evidence of the plan being referred to in any other capacity.