On Wednesday, Aug. 26, Balch wrote a Facebook post detailing his firsthand account of what happened on the night of Tuesday, Aug. 25, when 17-year-old Rittenhouse allegedly shot and killed two people and injured a third. Civil unrest enveloped Kenosha after local police shot a Black man named Jacob Blake seven times in the back, paralyzing him. Both Rittenhouse and Balch traveled to the scene of the chaos there among a contingent of militia members. Protesters had previously burned down buildings, including the Kenosha’s Department of Corrections, in response to the shooting of Blake. Balch appeared on a YouTube livestream called “Hair of the Dog” on Aug. 28, three days after Rittenhouse’s alleged attack, claiming that he personally did not go to Kenosha to “be against [the protest movement black lives matter] or be against anyone.”

Balch has not been accused of a crime or been linked to the shooting by law enforcement. He volunteered information about his acquaintance with Rittenhouse on his Facebook page.

But Hatewatch tied Balch to a Twitter account that also indicates he was immersed in white supremacist propaganda prior to traveling to Kenosha. Balch published to Twitter on Feb. 3, 2017 a link to a website that featured a video of explicit Nazi propaganda, as demonstrated here in these two archives: 1 and 2. The video Balch’s account linked to, “Truth Will Triumph: Adolf Hitler,” circulated on fringe white supremacist websites around the time he posted it. The video relies heavily on footage of Hitler speeches. White supremacists embedded that video within the domain “antifascism.org,” and employed carefully phrased and misleading content, enabling it to be circulated without being easily detected as Nazi propaganda. White nationalist Richard Spencer is among the people who shared it to Twitter, one day earlier than Balch did.

Balch’s Twitter account, which he hasn't tweeted from since December 2018, also follows and has retweeted Spencer. It also tweeted at Lauren Southern on the same day he shared the link to the Hitler video. Southern is a Canadian woman who frequently promotes the so-called great replacement conspiracy theory, which suggests that white people are being systematically replaced by non-white people in Western countries. Accused and convicted white supremacist terrorists – like the New Zealand mosque shooter – who adhere to this theory have murdered scores of people in recent years in its name. 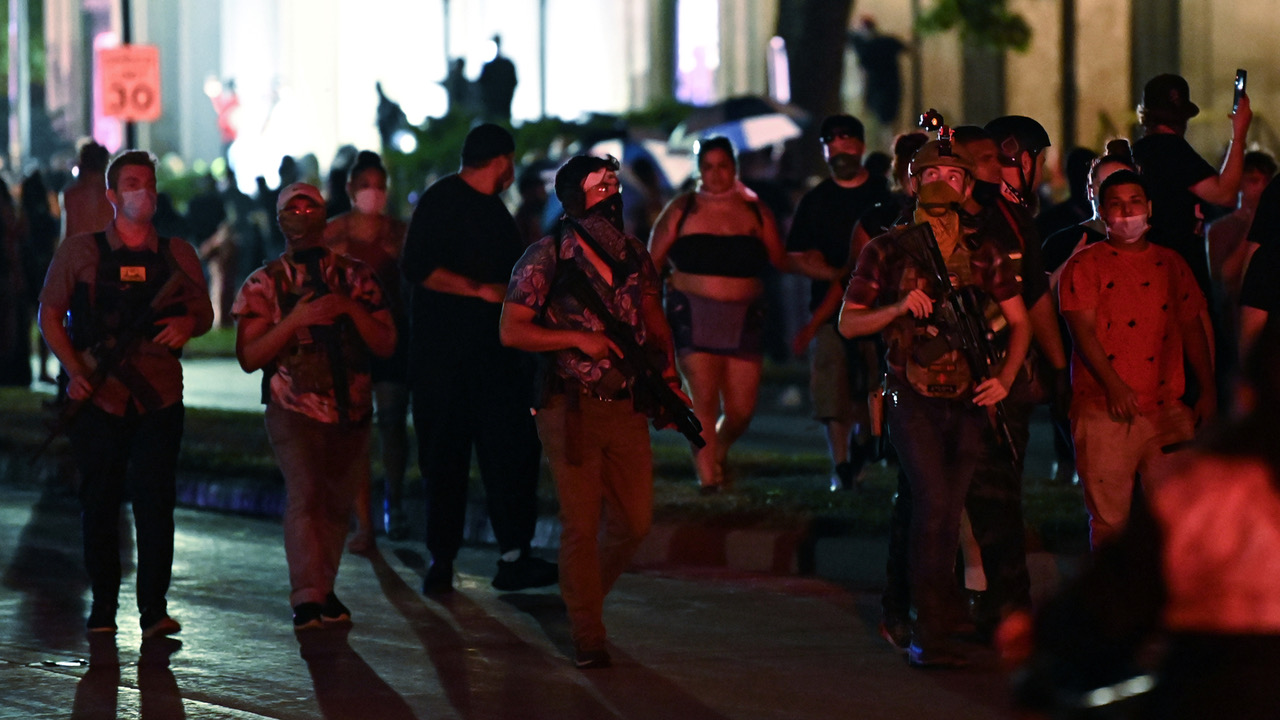 Armed men march in Kenosha. Some of the men pictured are wearing Hawaiian shirts, commonly used to signal association with the boogaloo movement. Photo by REUTERS/Stephen Maturen

Balch demonstrated an awareness of extreme far-right, antisemitic conspiracy theories on Twitter too. He referred to himself as a “goy” in one tweet. Goy is a Jewish name for a non-Jewish person, and it’s sometimes used by white supremacists ironically to signal their acceptance of those conspiracy theories. Balch wrote his “goy” tweet as one of a series of tweets directed at a man named Daniel Cohen, who describes himself in his Twitter bio as a rabbi. Balch appeared to focus his commentary at Cohen on that man’s views urging for gun control. At one point in the Nazi propaganda video Balch drove traffic to, the subtitles proclaim, “Beyond Europe and the whole world, the international Jewry will be recognized as its entire demonic threat,” before cutting away to an image of Jewish billionaire philanthropist George Soros. Soros is at the center of numerous antisemitic conspiracy theories peddled by far-right extremists.

Balch also shared a meme on Twitter that proclaimed, “Commies Can’t Punch You with a Hole in their Head. ” The meme, which Balch posted March 27, 2018, featured an illustration of a heavily armed man holding a hat with a blood soaked bullet hole in it.

Balch expressed paranoia and distrust of leftists on Twitter. He also followed far-right personalities who traffic in both conspiracy theories and sensational rhetoric about leftists. In addition to Southern and Spencer, Balch follows on Twitter far-right conspiracy pushers like Paul Joseph Watson, formerly of Infowars, and Mike Cernovich, a male supremacist figure known in part for peddling brain supplements online. Both of those personalities often focus acutely on leftists in their Twitter commentary. (In 2018, Balch also retweeted an account criticizing SPLC for not including a group called Redneck Revolt in its annual list of hate groups).

Balch presently employs a meme associated with the boogaloo movement as his Facebook wallpaper. This militia-related movement sometimes presents itself as being race-blind, but is demonstrably connected to the larger world of far-right extremism. Adherents of the boogaloo have allegedly murdered police in recent months. Balch’s wallpaper features a symbol of an igloo, which is typically employed by adherents of that movement. The meme says, “You Can’t Kill an Idea.” The timestamps show Balch uploaded the image on the night of Aug, 12, which also happens to be the third anniversary of the deadly “Unite the Right” rally in Charlottesville, Virginia.

Balch liked Facebook pages connected to or symbolic of the far right, including one associated with the Confederacy and another with so-called doomsday prepping, wherein people typically stash food and weapons in advance of what they believe will be a civil war or other apocalyptic event. Hatewatch attempted to contact Balch through Facebook but did not receive a response. His Facebook post about the deaths in Kenosha, laden with paramilitary jargon, blames “the government” for what took place.

“It is my belief that we only faced one monster out there that night. The Government,” he wrote. “It sought to agitate and create a situation where this would happen.”

During his appearance on the YouTube show “Hair of the Dog,” Balch shared his version of the night’s events, including stating without any corroborating evidence that there was a second shooter involved in the Kenosha killings.

Public records show Ryan Thomas Balch to be a 31-year-old man who has lived in Laurel, Mississippi, and parts of Wisconsin. (Balch’s Facebook page also notes that he lived in Laurel.) On Feb. 28, 2018, Balch posted to Twitter a screenshot from his Facebook account showing an image of something he appears to have shared on that site related to David Hogg, a survivor of the Parkland mass shooting. Balch also trolled Hogg on Twitter.

“Banned by @facebook for simply posting an image as a counterpoint. ‘Fake news’ so they say,” he wrote. The screenshot Balch shared that day clearly shows his full name on Facebook, “Ryan Thomas Balch,” indicating that the account from which he made the statement about the Kenosha bloodshed and the @Balch_Ryan Twitter account from which he shared the link to the Nazi propaganda video are connected.

Balch also posted tweets featuring geolocation tagging from inside of the state of Wisconsin. Twitter adds the geolocation onto a post if you want it to be embedded there. For example, Balch posted about Hillary Clinton in relation to “spirit cooking” on Nov. 5, 2016 from Milwaukee, Wisconsin. Balch’s Linkedin page says he lives in Milwaukee.

Spirit cooking refers to an element of the so-called #Pizzagate disinformation campaign, which was propagated by far-right extremists like Cernovich and Jack Posobiec, neo-Nazi collaborator, and current One America News Network correspondent. Balch posted more than once to Twitter about #Pizzagate, which falsely suggested that Democrats were coordinating a child sex-trafficking ring in the basement of a Washington, D.C.-area pizzeria.

Rittenhouse, the accused killer, has become a cause célèbre among right-wing pundits, who have argued that he acted in self-defense and that he is not an extremist. Notably, Tucker Carlson, on his primetime Fox News show, said Rittenhouse, "maintain[ed] order when no one else would." Hatewatch was unable to determine to what degree Balch may have been in contact with Rittenhouse prior to the Kenosha protests, if at all. It is also not clear whether or not the pair were connected on social media. So far, the only information linking the two men comes from Balch’s Facebook post.

Critics have slammed social media companies like Twitter and Facebook for the role their websites play in profiting off of the type of political street violence that has become more commonplace since Trump took office in 2017. On Friday, Facebook CEO Mark Zuckerberg acknowledged failing to sooner take down an event page calling for a militia-based response to the unrest in Kenosha that followed Blake’s shooting. Zuckerberg called the delay in action an “largely an operational mistake.”

Update: Following publication of this story, Ryan Balch wrote to Hatewatch to say that he "deeply and sincerely" apologizes for publishing materials to social media that "were at times hurtful to innocent bystanders." Balch claimed that the social media history described in this story related to content he produced for a Facebook page mocking the alt-right. Screenshot evidence he provided only accounted for online activity through 2016, and did not address many of the posts referenced in this article. You can read the full story here.