Throughout her campaign for Congress, and before she declared, Greene incorporated messaging from extremist organizations such as Georgia Three Percent Security Force Intel Militia, Gun Owners of America and anti-LGBTQ hate groups Mass Resistance and Alliance Defending Freedom (ADF).

Greene’s campaign did not respond to Hatewatch’s email request for comment. 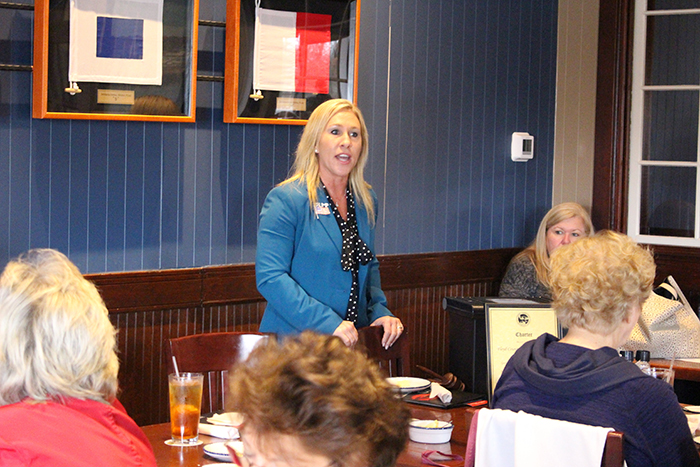 In an interview with Hatewatch, Georgia state Rep. Katie Dempsey, R-Rome, said she had not seen some of the inflammatory statements Greene made in the past: “That is not the person I have experienced.”

Hatewatch first covered Greene’s rise in April 2019 as she attempted to establish herself as an alternative candidate to Democratic incumbent Lucy McBath in Georgia’s 6th Congressional District. In December 2019, Greene ended her campaign for that seat and began campaigning for the 14th District seat currently held by Republican Tom Graves, who is retiring. The 14th District is in northwestern Georgia and includes Catoosa, Chattooga, Dade, Floyd, Gordon, Haralson, Murray and Whitfield counties.

The district is 49% male and 51% female. It is 85% white and 10% Black. Ten percent of the district’s residents identify as Hispanic. The unemployment rate is 13% and the median household income is $42,700. The college graduation rate is 17%.

According to Greene’s campaign website, her priorities include helping to complete the construction of a Southern border wall, putting a stop to the perceived growth of socialism and quelling the supposed threats to Second Amendment rights.

Greene initially had support from the antigovernment, anti-Muslim Three Percent Security Force Militia. Last year, Hatewatch provided some insight into the long-standing friendship between Greene and antigovernment militia leader Chris Hill. On the day after the Georgia primary results, the Three Percent Security Force Militia Facebook page congratulated Greene with a post reading, “Marjorie Greene is on the way to the Winner’s Circle!! Join us!!” The post illustrates the cozy relationship Greene has with the far-right antigovernment militia movement.

In June, The Times of London covered Hill’s antigovernment stance in the lead-up to the November general election. In a piece titled “Primed by Trump, Militias Gear up for ‘Stolen’ Election,” Hill described a bloody post-election scenario if Joe Biden were to beat Donald Trump and try to introduce new gun legislation. Both Greene and Hill have ardently supported militia groups in the past and fervently advocate for lax gun regulation.

Endorsements from other far-right groups grew in 2020. In April, Greene took to Facebook to announce that she was “extremely honored to receive the backing of Gun Owners of America,” a radical right-wing gun rights organization founded by Larry Pratt. 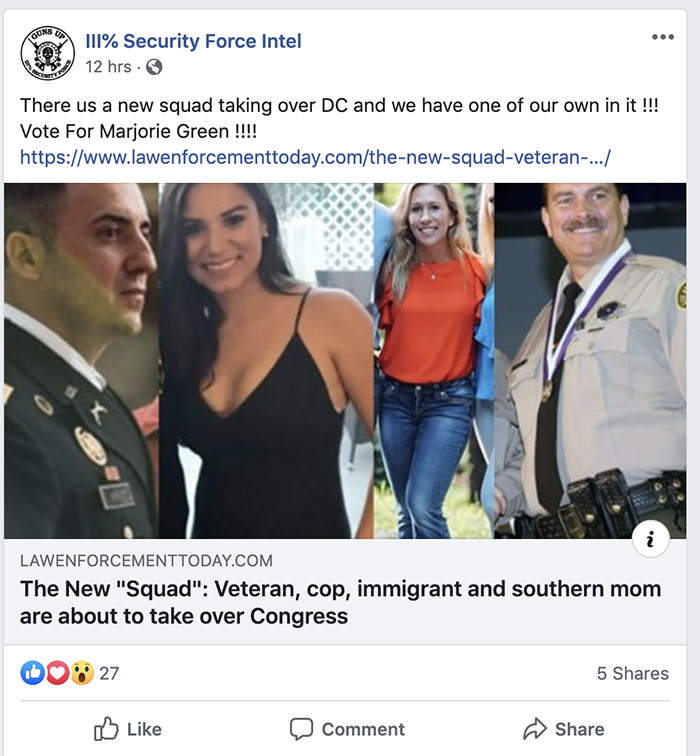 Three Percent Security Force Intel Militia showed its support for Greene and referred to her as “one of our own” in October 2019. (Screenshot from Facebook)

Pratt founded the GOA with the idea that it would be a staunch alternative to the National Rifle Association (NRA). Pratt’s views on gun rights came from a “no-compromise” platform. In the past, he has been linked to the antigovernment militia movement, white supremacist organizations and Christian theocrats. 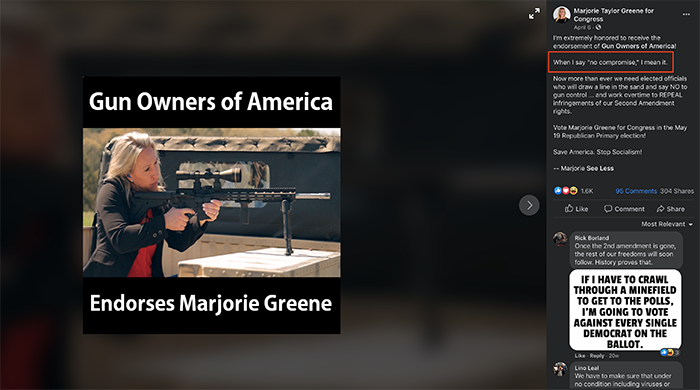 Greene embraces a “no-compromise” platform, similar to the one espoused by Gun Owners of America. (Screenshot from Facebook)

One of the most controversial events in Pratt’s career was his 1992 speech at the “Gathering of Christian Men” in Estes Park, Colorado. He addressed a crowd that included neo-Nazis, Klan members and Christian Identity adherents. Pratt’s views on government are closely aligned with Christian Reconstructionism, which seeks to impose biblical law on society. GOA and Greene share a “no-compromise” stance on perceived threats to Second Amendment rights.

In a 2019 essay published on the now-defunct website thewhiskeypatriots.com, Greene called women who disagreed with her stance on guns her “enemies.” The essay, titled “A Patriot’s Message to Her Enemies,” was specifically addressed to Democratic women, with Greene writing:

The word Democratic only means that the Democrat party is now the party of socialism. The sooner we all face the truth of this reality the better off we will all be, and all you socialist women can be honest now. You, who claim to be feminist and demand the future to be female, all just really are incapable of taking care of yourselves and just want “The Man” to take care of you because you think you won’t have to lift a finger once America is transformed. Fools. Complete and total fools you are.

Greene’s use of “Democrat Party” as opposed to “Democratic Party” also has a history of being used as a right-wing epithet to denigrate party members ­– the implication being that the party is not democratic in nature.

The letter gives a glimpse into Greene’s feelings toward her Democratic counterparts:

Democratic Socialist women are my enemies because they want to destroy things I value so much. They are the women in our country fighting to kill babies, take away guns, to raise their children as gender neutral, want our future to be all female, who hate men (especially white men), and are the women you find propagating real hate and racism. They venomously want to destroy the Second Amendment. This is where I am drawing the line.

Greene’s radical views don’t stop at gun rights. As she stated in her essay to perceived enemies, she is determined to go after gender-nonconforming individuals. This led her to target LGBTQ people and align herself with hate groups Mass Resistance and Alliance Defending Freedom.

Greene has previously liked Mass Resistance on Facebook. She accompanied the group to Alpharetta, Georgia, in 2019 to protest against Drag Queen Story Hour, a literacy program led by drag queens to help promote reading and inclusivity.

“So, I’m waiting for my friends that are here with Mass Resistance. You guys can look up Mass Resistance, it’s a group that tries to stand up against this brainwashing of our children,” Greene said in an April 2019 Facebook recording of the event.

In the video, Greene can be heard describing the drag queen in attendance as “disgusting” and “an abomination.” Mass Resistance was founded in 1995. The group focuses primarily on challenging LGBTQ civil liberties, but recently it began going after other groups, such as the Black Lives Matter movement.

In June 2019, Greene shared a Facebook post quoting the anti-LGBTQ hate group Alliance Defending Freedom in an effort to reframe an issue regarding trans rights as an attack on women’s sports. 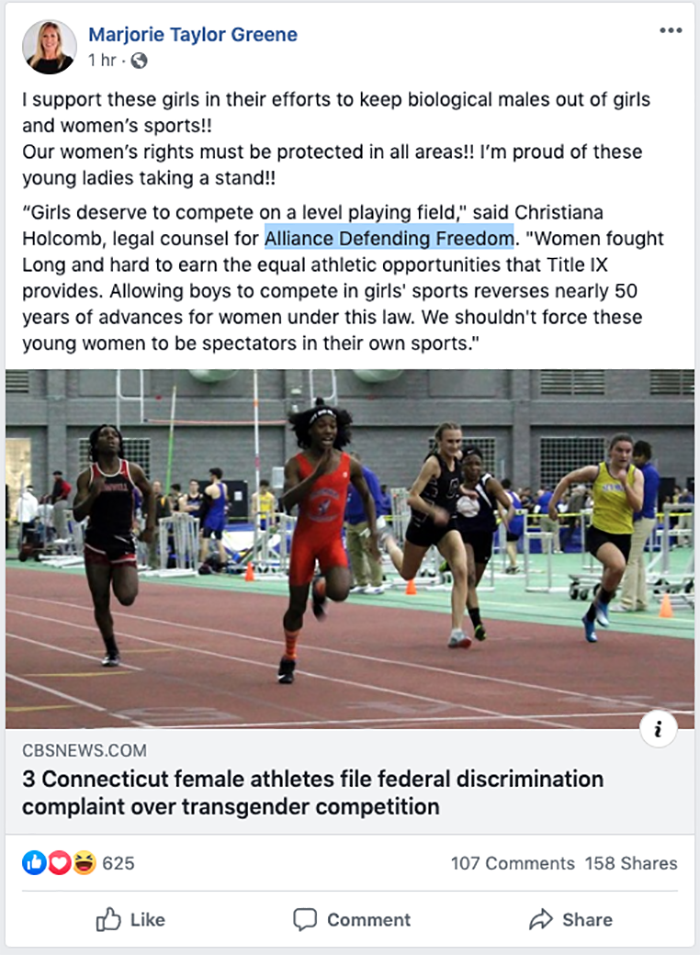 Greene shared an article promoting the work of Alliance Defending Freedom in April. (Screenshot from Facebook)

The multimillion-dollar ADF is one of the most powerful Christian law firms in the country; its work involves redefining religious liberty as a way to discriminate against LGBTQ people. One of ADF’s current interests is filing lawsuits in various states that attempt to ban trans students from sports, claiming that trans women, especially, are “biological males” who shouldn’t compete against cisgender women. This strategy is part of a false narrative ADF pushes, claiming that trans women are endangering the rights of cisgender women.

According to Greene, individuals who transition from male to female join female sports teams only because “they hate women.”

Campaign of conspiracies and misinformation

Much of the current news coverage about Greene is focused on her prior comments regarding support for the QAnon movement. 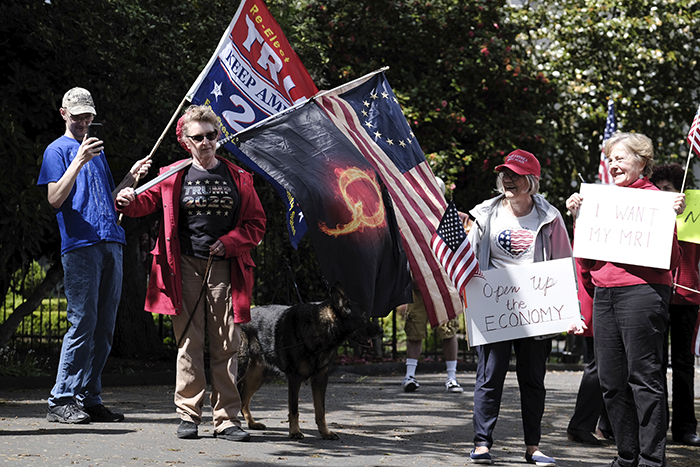 A woman holds a QAnon flag as protesters gather outside Gov. Kate Brown's residence in Salem, Oregon, on April 25, calling for novel coronavirus restrictions to be lifted. (Photo by Alex Milan Tracy/Sipa via AP Images)

QAnon is a far-right conspiracy theory that falsely claims, among other things, that an individual known only as Q with supposed “Q-Level” government security clearance has been leaking high-level information. The theories allege a global network of child sex traffickers is orchestrating a plot against President Trump. QAnon followers believe Democrats are behind the plot.

Last month, The New York Times reported on Greene’s past statements referring to Q as a “patriot” and pushing the idea that Q was working to take down a supposed cabal of Satan-worshipping pedophiles. In an Aug. 14 interview with Fox News, Greene rescinded her support for QAnon, citing “misinformation” as the reason she is allegedly abandoning the cause.

Her decision to distance herself from QAnon doesn’t address any of the other conspiracies she’s promoted, including the mischaracterization of Supreme Court Justice Ruth Bader Ginsburg and progressive billionaire philanthropist George Soros. 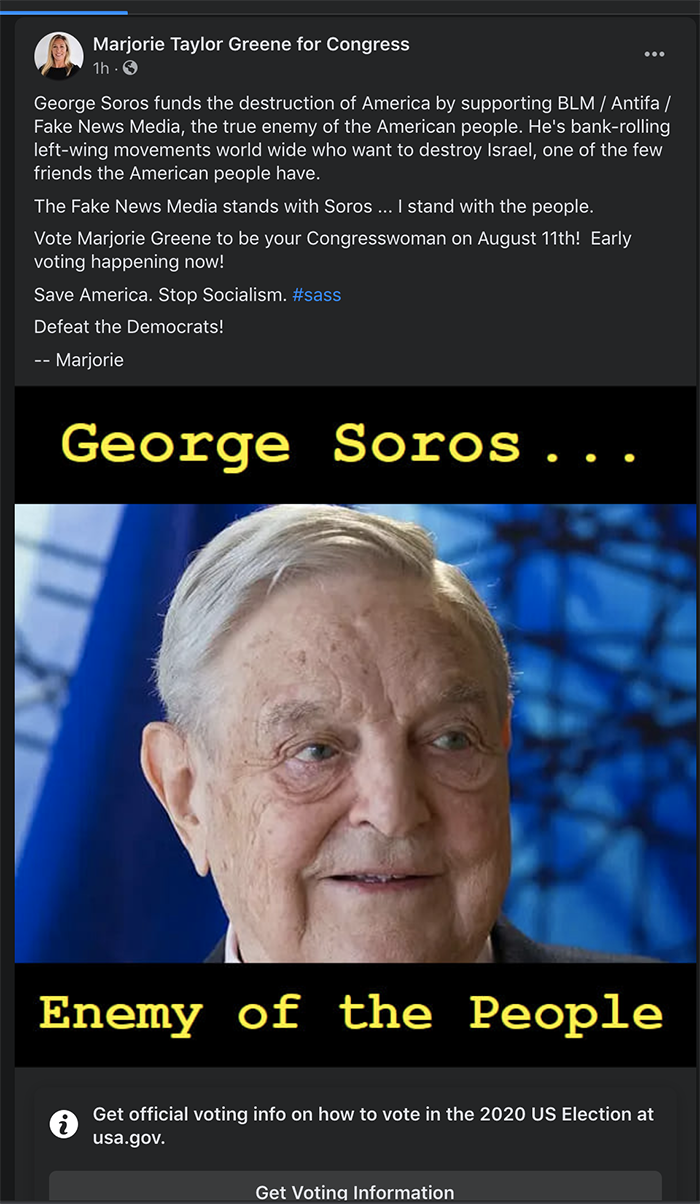 Greene shared a post in August labeling George Soros as the mastermind behind plans to destroy the U.S. and Israel. (Screenshot from Facebook)

According to a breakdown provided by the Anti-Defamation League (ADL), conspiracies surrounding Soros are based largely on antisemitic tropes rooted in the idea that Jews are secretly puppeteers operating as a cabal in control of global events.

The attack on Soros is an example of the fringe, baseless conspiracies Greene peddles. She has also accused Ginsburg of supporting sex trafficking, underage sexual consent and co-ed prisons. 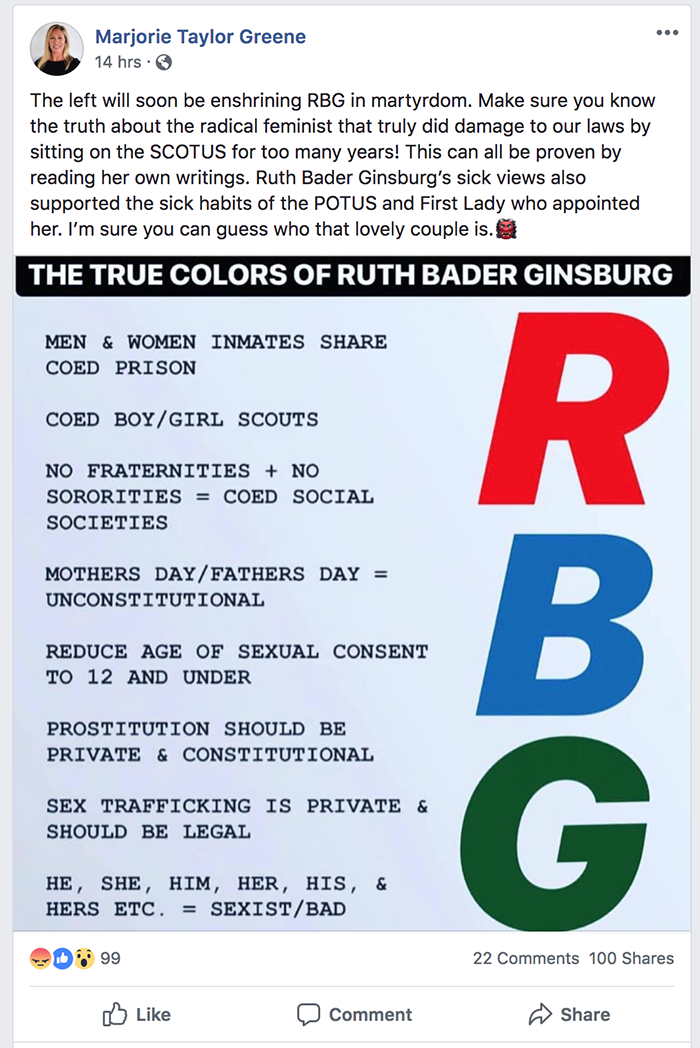 CNN recently reported that Greene promoted the idea that the 2017 “Unite the Right” Rally in Charlottesville, Virginia, was an “inside job.” The events in Charlottesville resulted in the death of progressive activist Heather Heyer after James Alex Fields Jr. plowed his car into a crowd of anti-racist protesters. Fields is serving a life sentence for the crime.

Greene may have abandoned her support of QAnon, but over the years, she’s cultivated the spread of misinformation for her own personal gain.

Her prior support for QAnon is not the only troubling issue for many on the left and the right, causing a rift within the Republican party.

According to The Guardian, Tim Miller, former spokesman for the Republican National Committee, has called major GOP figures’ backing of Greene “irresponsible.” House Minority Whip Steve Scalise, R-La., has also come out against Greene, saying he finds many of her past comments “disgusting.”

Still, Greene appears to have impressed many Republicans in Washington, D.C. President Trump appears to be a supporter of Greene’s campaign, going so far as to Tweet out a congratulatory message after her primary win, saying, “Marjorie is strong on everything and never gives up – a real WINNER!”

Greene was subsequently invited to the White House for the final night of the Republican National Convention where President Trump accepted the nomination to be the Republican presidential nominee for the upcoming general election.

In addition, in an assessment of Greene’s major donors, The Guardian uncovered a number of donations from groups connected to White House Chief of Staff Mark Meadows. Campaign contributions have also come from the Heritage Foundation’s board of trustees chair Barb Van Andel-Gaby and the House Freedom Fund, currently led by Jim Jordan, R-Ohio. Jordan faces accusations that he covered up alleged sexual abuse of wrestlers while he was an assistant coach at Ohio State University.

Greene is slated to be on the ballot for the Nov. 3 election.