One of the militia members who joined Kyle Rittenhouse in Kenosha, Wisconsin, told Hatewatch that far-right propaganda praising the 17-year-old accused murderer is harmful and said that he was not part of a “well-regulated militia.”

Ryan Balch, the Wisconsin man who Hatewatch reported was immersed in white supremacist propaganda before joining Rittenhouse in Kenosha on Aug. 25, reached out to Hatewatch by phone. He offered additional context about what happened that night, when Rittenhouse allegedly killed two people and injured another. Balch, 31, described the militia contingent that descended on the city in the midst of civil unrest there as being “small groups of friends who went together” in separate groups. He called the groups “ad hoc.” Balch also told Hatewatch that Rittenhouse lied to him that night, claiming that he was 18 years old and an EMT, both of which were untrue. 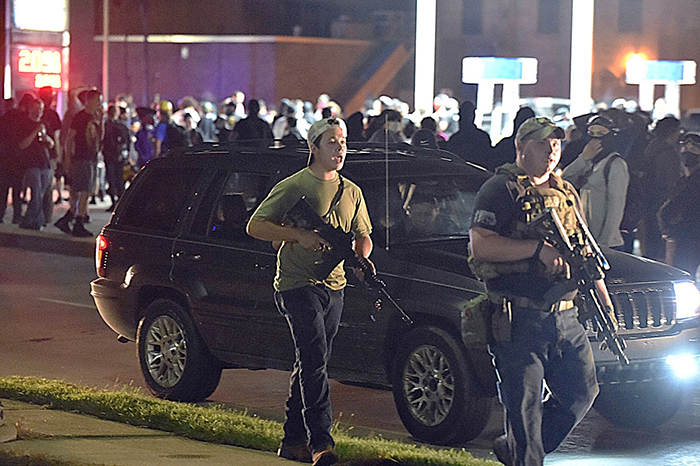 Referring to the culture war surrounding the violence that gripped Kenosha in August, Balch told Hatewatch in a phone call:

I think that the propaganda around Rittenhouse is not factually based, which I mean, it’s propaganda, so of course. But … it’s really damning [when looking at] the facts of what happened. And, I think them lionizing him is only going to hurt him down the road. It’s only going to [make] the divide bigger. Myself personally, I don’t lionize him. Rittenhouse was a kid who lied to the people he was with. Anybody who was in proximity to him, he lied to us.

Rittenhouse has been celebrated as a hero by many far-right commentators. Fundraising efforts for his legal defense have pulled in around $1 million. Fox News’s Tucker Carlson defended Rittenhouse on his show after his arrest on homicide and gun charges. A channel on the messaging app Telegram associated with the street-brawling Proud Boys published a propaganda video featuring images and video of Rittenhouse, glorifying him to the tune of the song “A Real Hero” from the soundtrack to the 2011 film “Drive.” President Trump also appeared to defend Rittenhouse during a press conference.

Balch dismissed the credibility of a potential criminal defense of Rittenhouse using the Second Amendment’s description of a “well-regulated militia,” which is what his lawyer apparently intends to argue on his behalf in court.

“There was not a whole lot of communication [that night], and that was even within the protesters themselves,” Balch told Hatewatch. Asked what he would need to call a militia well-regulated, Balch said, “There would have to be some organization.” Hatewatch reached out to Rittenhouse’s lawyer, John Pierce, for a comment on this story, through his firm Pierce Bainbridge. Pierce did not immediately respond.

Balch, who voted for Trump in 2016, expressed disappointment with the incumbent president’s response to Kenosha and America’s cultural divisions in a broader sense. He described Trump’s use of federal agents in response to civil unrest as being “too heavy handed” and said he would be voting for Libertarian candidate Jo Jorgensen in the upcoming presidential election.

“It’s a clear violation of the Constitution,” Balch said, referring to Trump’s use of federal officers in response to unrest.

Balch, who described himself as an Iraq War veteran with an interest in militia culture that dates back to 2014, first contacted Hatewatch on Sept. 2 to clarify the intentions behind his social media presence. On Facebook and on Twitter, Balch referenced the far-right boogaloo movement, retweeted white nationalist Richard Spencer and tweeted a link to a website hosting a Nazi-propaganda video cut with Hitler speeches. Balch also used Twitter to troll Parkland mass shooting victims and a gun control-supporting rabbi, while using esoteric, antisemitic slang. Balch confirmed to Hatewatch that he operated those social media accounts.

Balch made incongruous statements to Hatewatch while seeking to distance himself from far-right extremism. He said that his posts were made at a time when he sought to “infiltrate” the white supremacist friendly “alt-right” movement. Hatewatch asked Balch to explain the motivations behind his infiltration effort, and he sent screenshots posted from a Facebook account called “Alt Right Autismos on Parade” that mocked Nazism. Hatewatch was unable to verify a direct connection between that account and Balch, and he declined to provide any evidence after being asked. The screenshots he sent were also dated in July 2016, roughly half a year before he retweeted Spencer. When asked why he used his own name on his supposedly satirical Twitter account, Balch said he created it at a time when that company disallowed people from using pseudonyms. Twitter, however, has never held the policy he described. Balch also acknowledged having made “past endorsements of national socialism and racism” in a Facebook post he published Sept. 2.

“Understand that these views were not and have never been my own,” Balch wrote separately in an email to Hatewatch. “I tried to use humor to combat them. And my methods were at times hurtful to innocent bystanders. I deeply and sincerely apologize for that. As it was never my intention. Thank you for allowing me to clarify this publicly.”

In the same Sept. 2 Facebook post in which he mentioned national socialism and racism, Balch also disavowed the boogaloo movement, which has been linked to an increasing number of crimes. On Aug. 27, police arrested a person affiliated with the movement for sending threatening messages to a Santa Clara, California, health official. Earlier this month, the Department of Justice charged two adherents of the boogaloo movement with attempting to become assets for the Sunni fundamentalist group Hamas. Those stories add to a list of crimes associated with that mostly far-right, antigovernment movement, including alleged murder.

“I Ryan Balch disavow any affiliations with the boogaloo movement. Either implied or assumed. Past or present,” Balch wrote on Facebook.