Proud Boys attended a pro-Trump rally in Washington, D.C., on Saturday that ended with members of the group tearing down and destroying Black Lives Matter banners from two historic Black churches.

Saturday’s event was the latest in a series of demonstrations Trump supporters have held in Washington, D.C., and throughout the country to protest the results of the presidential election. Members of the Proud Boys, which the SPLC defines as a hate group, have been present at a number of these events.

In videos captured by a reporter from The Daily Caller, a group of Proud Boys carried a Black Lives Matter banner from Asbury United Methodist Church, a historic Black church founded in 1836. They posed for photos with the sign before placing it on the ground and setting it on fire. As they watched it burn, Proud Boys shouted “fuck antifa” and “Uhuru!” – a Swahili word for “freedom” that the group uses as an ironic slogan. 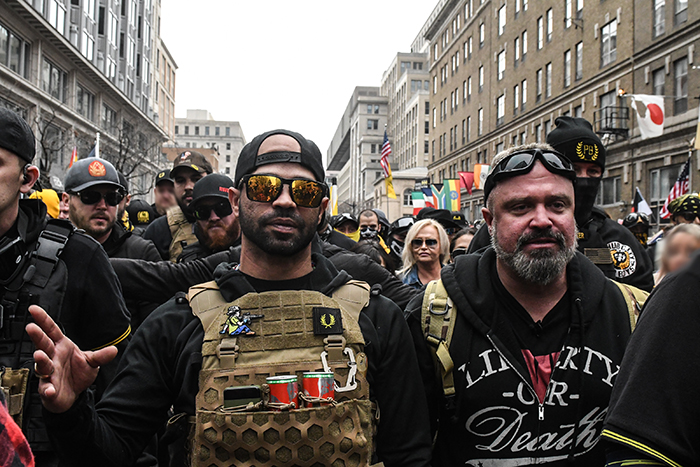 Enrique Tarrio (left), leader of the Proud Boys, and Joe Biggs gather during a protest on Dec. 12 in Washington, D.C. (Photo by Stephanie Keith/Getty Images)

In addition to their signature black and yellow clothing, several Proud Boys who took part in the banner burning wore “RWDS” patches on their tactical vests. The acronym stands for “Right Wing Death Squad.”

Later in the night, Proud Boys tore down and stomped on another Black Lives Matter sign as they cheered and chanted: “Whose streets? Our streets!” The banner was hung outside Metropolitan African Methodist Episcopal (AME) Church, whose congregation dates to 1872. Frederick Douglass worshipped at the church, and prominent Black activists and scholars including Ida B. Wells and Booker T. Washington delivered lectures there.

Early Monday morning, Proud Boy Joe Biggs, who holds a national profile in the organization and is a regular figure at Proud Boys events throughout the country, posted on Parler that the group was “[taking] a stand against evil.” “This is [a] country founded on Christianity and it will always be a Christian nation,” he wrote in a telling attempt to explain the group’s actions that weekend. Both of the banners they destroyed were from Black Christian churches, raising questions about what version of Christianity Biggs and other Proud Boys see as foundational to the nation.

Saturday night was punctuated by violence, with Proud Boys roaming the streets in large groups, fueled by alcohol and their deep antipathy for progressives and antifascist activists. One person marching with a group of Proud Boys encouraged others to “get off the sidelines!” Members of the group appeared frustrated that members of law enforcement repeatedly blocked their movements and tried to keep them separated from counterprotesters. “You’re just obeying orders,” Biggs said mockingly to police. “Oh yeah, guess what? That fucking thin blue line’s getting thinner and thinner.”

In total, police arrested 39 people, according to The Washington Post. Four were stabbed outside of a bar around 9 p.m. One man was arrested in connection with the crimes.

The Proud Boys, founded in 2016, have a long history of violence and were further emboldened this September when President Trump instructed the group to “stand back and stand by” during the first presidential debate. Though the Proud Boys allow members of all races, they espouse an authoritarian philosophy premised on maintaining and furthering certain social and political inequalities. They believe Western men are solely responsible for creating the “modern world,” take a hardline stance against immigration, believe women are best suited for housework, hold rabidly anti-Muslim beliefs and regularly dehumanize trans people. Racist language is common in Proud Boys spaces, like a recent online plea Biggs made to “Make Zimbabwe Rhodesia again” – a call for a return of a white colonialist government in the African nation that is commonly made by white nationalists. One Telegram account associated with the Proud Boys, which has more than 15,000 subscribers, regularly reposts content from white nationalist outlets like National Justice and VDARE.

Proud Boys portray antifascists, Black Lives Matter activists and the left more broadly as an existential threat to the nation. They have vocally defended Kyle Rittenhouse, a teenager accused of murdering two protesters in Kenosha, Wisconsin, in August. In the volatile world of 2020, the Proud Boys have portrayed themselves as the defenders of “law and order” as a means of justifying their own violence. “We are at the precipice of great and violent change boys,” one chapter posted recently on Telegram. “[Proud Boys] are the only ones standing f2f [face to face] with the enemy to stop them. Stand with us or against us.”

The Proud Boys are now using footage of their members burning the Black Lives Matter banner and tearing down another as propaganda for their group. The videos can be found across their social media accounts. “How was your weekend? Ours was lit,” the Philadelphia chapter posted on Parler with an image of the burning banner, which earned praise from commenters. “Love it!!!” one wrote.

Black churches have historically been one of the key organizing spaces in the Black freedom struggle and have therefore long been subject to racist attacks. They represent Black autonomy – something viewed as especially threatening in the midst of the civil rights movement of the 1950s and 1960s. Churches were bombed and set on fire throughout the era, including in 1963 when Klansmen bombed the 16th Street Church in Birmingham, Alabama, and killed four young girls.

Since 1956, two years after the Brown v. Board of Education Supreme Court decision kicked off the movement in earnest, there have been more than 100 attacks on Black churches. Many have been relatively recent. In 1996, the Department of Justice launched a civil rights investigation after at least 34 Black churches were burned that year, most in the rural South. A white supremacist terrorist killed nine worshippers at Emanuel AME Church in Charleston, South Carolina, because he believed in a racist conspiracy about a supposed epidemic of Black-on-white crime only five years ago.

As threats against elected officials, political candidates and election workers have elevated in the aftermath of an election that President Trump refuses to concede, Black churches have also been targeted. Ebenezer Baptist Church in Atlanta, where Senate candidate Rev. Raphael Warnock ministers as senior pastor, has reportedly been inundated with threats in the leadup to Georgia’s runoff election. Martin Luther King Jr. was once the minister of the church.

Black religious leaders have noted the historical significance of the Proud Boys’ attacks, but have stated they will not be intimidated.

“We will move forward, undaunted in our assurance that Black Lives Matter and we are obligated to shout that truth without ceasing,” she wrote in a statement.