Among the most visible ideological adherents at state capitol protests after Jan. 6 and in Richmond, Virginia, on Jan. 18 for pro-Second Amendment rallies were people involved with the boogaloo movement, easily recognizable in most cases because of Hawaiian-themed shirts and masks along with their weapons, signatures of boogaloo followers. The shirts are a reference to “big luau,” which is an adaptation of the word “boogaloo.”

Following the insurrection at the U.S. Capitol that resulted in five deaths, large swaths of the American right have continued to falsely claim that former President Trump won the election and that President Joe Biden and the Democratic Party “stole” it.

Right-wing protests were also slated for state capitols the weekend of Jan. 17, and boogaloo adherents (self-proclaimed “boogaloo boys”) were among those either planning the protests or planning to go. 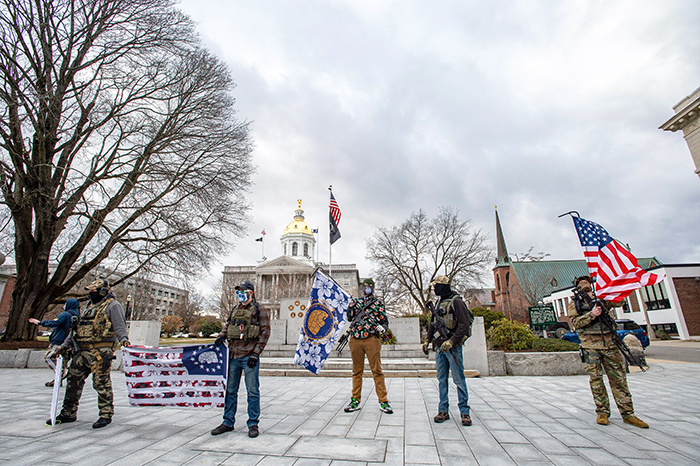 Armed "boogaloo boys" stand holding a flag in front of the New Hampshire Capitol in Concord on Jan. 17 during a nationwide protest called by antigovernment and far-right groups supporting outgoing President Donald Trump and his claim of electoral fraud in the 2020 presidential election. (Photo by Joseph Prezioso/AFP via Getty Images)

However, as a result of the events of Jan. 6, state capitols and the U.S. Capitol are under heightened security and tech companies have finally deplatformed a number of groups, individuals and even whole social media apps where conspiracies, mis- and disinformation and violent rhetoric have been spreading for years. This rhetoric was amplified by GOP officials, allies and Trump himself.

The deplatforming and increased media and security scrutiny on right-wing groups after the attempted coup thus put a damper on right-wing events scheduled for Jan. 17, but nonetheless, there were still a few who showed up at sparsely attended state capitol rallies, and among those who did were boogaloo followers, perhaps most visible in Richmond, Virginia, on Jan. 18 for “Lobby Day” – in support of the Second Amendment. Last year, the event drew thousands of gun advocates; this year, maybe a couple of hundred.

Regardless, rallies and protests have continued across the country in support of false claims that the election was stolen.

Boogaloo boys participated in the rally in Richmond, distinct in Hawaiian shirts and other Hawaiian-themed clothing and gear, but a few also sported Black Lives Matter (BLM) patches and others rainbow flag patches, in alleged support of the BLM movement and LGBTQ rights. It’s unclear how much of this support is genuine, and how much is simple political opportunism as the movement attempts to muddy ideological boundaries in order to triage their image and draw in more adherents.

The thread that binds boogaloo adherents is their belief that the country is headed toward a civil war – and that mass civil conflict of this kind is the only way for the country to right its path. These antigovernment beliefs have found appeal beyond the movement’s racist roots, making it adaptable and easily spread.

What are the origins of the boogaloo movement?

The term “boogaloo” comes from the 1984 breakdancing movie “Electric Boogaloo.” The boogaloo movement uses the term to indicate support for a civil war to overthrow democracy.

Boogaloo memes and ideas have been circulating since the 2010s, but in the past couple of years the movement’s adherents have been more visible at rallies and events. The January 2020 Virginia Citizens Defense League Second Amendment rally in Richmond, Virginia, was one of the first more public introductions of movement believers.

Boogaloo ideology has roots in right-wing antigovernment and white nationalist belief systems, though it attracts a wide array of right-wing adherents. Those who associate with the subculture are predominantly young white men who use social media to spread their beliefs and organize. The movement first congealed on Facebook across more than 100 groups with tens of thousands of members. Despite many warnings from reporters and civil society organizations, Facebook failed to remove the violent content proliferating on boogaloo-related groups for months – enough time for the disjointed movement to congeal, organize, and grow its ranks.

The boogaloo culture operates as a diffuse movement rather than a traditional group organizational structure with a single leader.

Boogaloo adherents support civil war and revolution against the current democratic system – something they often discuss sparking by forcing violent confrontations with members of law enforcement.

Boogaloo followers have rallied around Duncan Lemp, a 21-year-old Maryland boogaloo follower who was killed by law enforcement in March 2020. Lemp was a right-wing activist who was shot in his house during a police raid. Lemp’s death galvanized an anti-police stance among some boogaloo adherents.

Is the boogaloo movement racist?

The movement has racist roots and includes white power activists, but it is not exclusively premised on pursuing white supremacist ideas.

There are white nationalist boogaloo adherents and those who would fit into other hateful ideologies, but there are some adherents who claim to be libertarian and some who claim to support antiracist movements and LGBTQ movements.

Despite this ideological messiness, it is telling that most of the movement’s martyrs are white men and women killed at the hands of law enforcement and that it was a white man, Duncan Lemp, who first galvanized the movement – not the deaths of the thousands of Black people killed by police. Boogaloo followers have attended demonstrations associated with the Black Lives Matter movement, but it is not, at its core, about remedying the systemic injustices that are the focus of that movement. The only place boogaloo and BLM activists seem to overlap is in their anger toward law enforcement, but the source of their grievances, proposed remedies and visions for the future are completely distinct.

Is the boogaloo movement ‘leftist’?

No, though there are people involved who may hold views that are more in alignment with left-leaning ideologies, like support for Black Lives Matter and LGBTQ equality.

Leftists and members of the boogaloo movement might, on the surface, appear to hold similar positions on policing, but their goals are vastly different. Left-wing political movements want to root out systemic racism that plagues law enforcement while investing in healthcare, community programs, housing and other resources and programs that that can begin to remedy deeply entrenched racial and economic inequality. Boogaloo adherents want to dismantle law enforcement and the current political order itself through a civil war. For them, the state can only be a source of tyranny, and has no meaningful role to play in the redistribution of resources or in providing protections for groups that have historically been marginalized and discriminated against.

Currently, some right-wing media outlets, especially, are trying to paint the boogaloo movement as leftist in what seem to be attempts to deny right-wing responsibility for years of right-wing radicalization. They appear to be attempting to lay blame for the violent insurrection at the Capitol at the feet of leftists, and not radicalized right-wing supporters of Donald Trump.

Not all do. Most claim to be nonpartisan and some have been critical of the Trump administration. Some who took part in the Jan. 6 insurrection at the U.S. Capitol, such as those associated with the Last Sons of Liberty boogaloos, claimed on Parler (before it was deplatformed) that they don’t support Trump but also don’t support the current democratic system of government.

Is the boogaloo movement violent?

It can be, and that is a function of the beliefs of individual adherents through violent memes and calls for civil war that have been shared by boogaloo followers on social media. There have also been several documented instances of violence perpetrated by followers of the boogaloo movement:

· A self-proclaimed boogaloo boy in Texas allegedly used Facebook Live to announce his plans to murder police. He was arrested in May.

· A Colorado man involved with the boogaloo movement was also arrested in May for possessing pipe bombs. He had been planning to attend a rally calling to reopen businesses despite COVID-19.

· An Ohio man was arrested in May for allegedly plotting to spark an uprising that would lead to the imposition of martial law and the next civil war. The FBI says the man also plotted to ambush and kill police.

· Three men with alleged boogaloo ties were arrested on terrorism-related charges in June in Las Vegas for allegedly plotting to spark violence during BLM protests in the city.

· Air Force staff sergeant Steven Carrillo was charged with murder and attempted murder in June after he led a drive-by ambush on May 29, 2020, that resulted in the shooting death of protective security officer David Patrick Underwood. Underwood and a fellow officer were guarding the courthouse at the Ronald V. Dellums Federal Building in Oakland, California. Carrillo also faces 19 additional counts in a case brought by the Superior Court of California, County of Santa Cruz, including murder of a peace officer engaged in duties and attempted murder of a peace officer for killing Sgt. Damon Gutzwiller while shooting at multiple Santa Cruz County sheriff’s deputies in a June 6 ambush in Ben Lomond, California.

Is the boogaloo movement a hate group?

No. Movements are not “groups,” with defined organizational and leadership structure. However, the boogaloo movement includes extremists who seek to overthrow the current democratic system and incite violence.

Will we see more boogaloo activity in 2021?

Yes. The movement was able to establish firm footholds via social media and its participants have demonstrated an ability to organize and show up for protests, rallies and events. Because the boogaloo movement can include a variety of extremist right-wing ideologies and some libertarian-leaning ideologies and because it has the ability to hide under supposed values of liberty, unity and advocating for individuals’ constitutional rights, it has the ability to appeal to wider audiences.