Before multimillionaire conspiracy theorist Alex Jones riled up Donald Trump’s fans with lies about a stolen election, he privately expressed revulsion over the 45th president, a video leaked to Hatewatch reveals.

“It’s the truth and I’m just going to say it. That I wish I never would have fucking met Trump,” Jones said on camera in January 2019, while shooting a documentary in Austin, Texas. “I wish it never would have happened. And it’s not the attacks I’ve been through. I’m so sick of fucking Donald Trump, man. God, I’m fucking sick of him. And I’m not doing this because, like, I’m kissing his fucking ass, you know. It’s, like, I’m sick of it.”

According to Caolan Robertson, a filmmaker Jones hired to shoot a propaganda film called “You Can’t Watch This” that produced this outtake, the conspiracy theorist’s comments disparaging Trump are emblematic of his cynical business model. The leaked footage contrasts starkly with Jones’ public rhetoric about Trump. Jones’ talk show Infowars promoted and idealized Trump daily, throughout both the 2016 presidential campaign and the former president’s time in office.

Robertson also shared with Hatewatch a screenshot of text messages he claimed to have exchanged with Jones. In them, the Infowars host appears to ask him to discard comments he made from the final product of the film. Robertson told Hatewatch that the comments Jones made were him expressing his disgust with Trump. 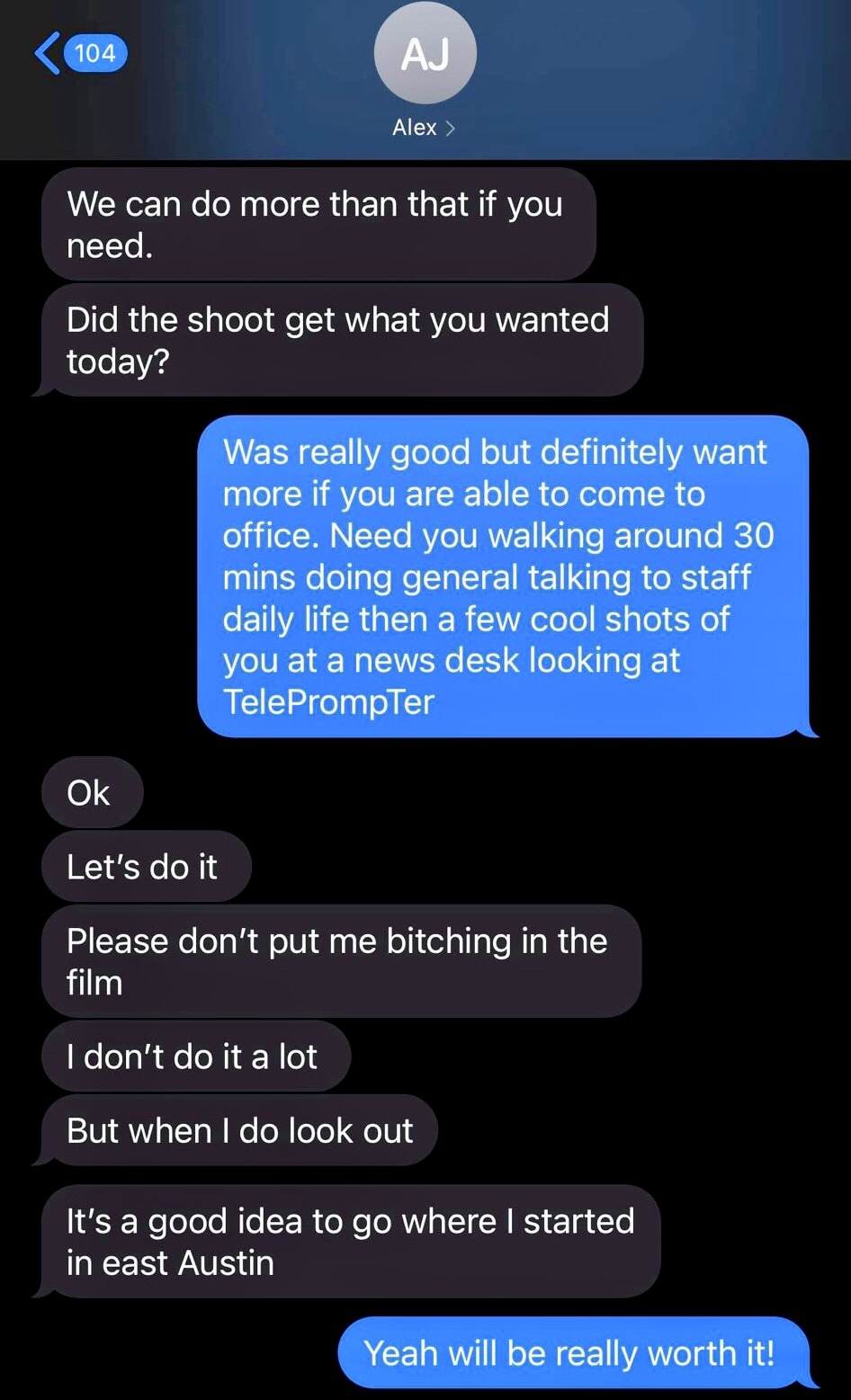 Documentary filmmaker Caolan Robertson supplied Hatewatch with this screenshot of a text-message exchange with Alex Jones.

“Please don’t put me bitching in the film. I don’t do it a lot. But when I do look out,” Jones writes across three messages, according to the screenshot Robertson shared.

Robertson, whom far-right figures hired to shoot a number of propaganda films, leaked the footage and messages to Hatewatch to back up his claim that Jones is motivated by a desire to exploit Trump’s fans. Robertson told Hatewatch that during the same shoot, Jones bragged to him off camera about making $60 million in 2018. (Although Jones is a noted fabulist, he testified in court under oath to bringing in $20 million in revenue in 2014.) Robertson told Hatewatch that Paul Joseph Watson, a far-right internet performer Jones hired to produce content, who also appeared in the propaganda film, allegedly told Robertson the Infowars founder paid him $16,000 per month for his work – or a salary of close to $200,000 annually.

Robertson also told Hatewatch that off camera, Jones took delight in belittling his own audience, suggesting he could sell them “dick pills” and claiming they would “buy anything.”

“Alex Jones doesn’t care about most of the stuff he professes to,” Robertson told Hatewatch over Skype from his home in London. “It just shows he doesn’t care about anything he talks about. He doesn’t like Trump but then goes on camera talking about how Trump is the savior.”

Robertson has disavowed the far right and told Hatewatch he is working to undo the damage he did while producing propaganda for extremists such as Jones. In August 2020, he also shared evidence with Hatewatch that One America News Network correspondent Jack Posobiec interviewed a white supremacist following a march in Warsaw wherein participants, including neo-Nazis, allegedly chanted, “White Poland.”

Hatewatch reached out to Infowars for this story but never received a reply.

Jones’ alleged exploitation of Trump’s base extended to boosting the lie that Trump won the 2020 presidential election. In Washington, D.C., on Jan. 5 and Jan. 6, Jones hyped up crowds of Trump supporters before some of them stormed the Capitol building in an unprecedented attack that left five people dead.

“We have only begun to resist the globalists. We have only begun our fight against their tyranny. They have tried to steal this election in front of everyone,” Jones shouted on the night of Jan. 5. “I don’t know how this is all going to end, but if they want to fight, they better believe they’ve got one.”

The Washington Post reported on Feb. 20 that the Department of Justice and the FBI had opened a probe to determine the degree to which Jones and Stop the Steal leaders Roger Stone and Ali Alexander may have influenced the insurrection attempt on the Capitol building on Jan. 6. The Wall Street Journal reported earlier in February that Jones donated $50,000 to a Jan. 6-related event in exchange for access to a headlining speaking slot to address Trump’s fans.