Right-wing protesters, including members of the Proud Boys, staged another in a long-running series of confrontational demonstrations­­ in Portland, Oregon, a city far-right extremists target often because of its famously progressive politics. The Sunday rally resulted in multiple brawls with counterprotesters and, ultimately, gunfire.

The Proud Boys have faced setbacks in recent months, including criminal charges for some members for their roles in the Jan. 6 insurrection, infighting among their ranks, the imprisonment of their chairman, and the defeat of President Donald Trump, who seemingly offered them his support. Despite this, the Proud Boys and the larger far-right movement continue to organize around the country, bringing violent clashes and working to enter more mainstream political spaces. 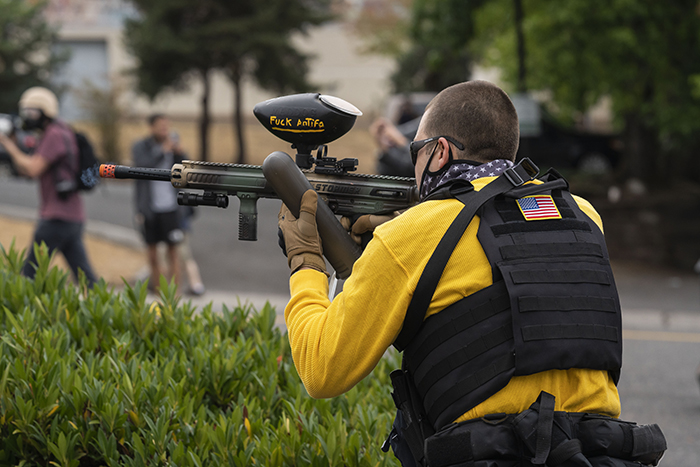 A member of the Proud Boys fires a paintball gun with the words "Fuck Antifa" emblazoned on it on Aug. 22 in Portland, Oregon. The Proud Boys and other far-right extremists fought with left-wing activists in Portland on the anniversary of a similar fight in 2020. (Photo by Nathan Howard/Getty Images)

At Sunday’s protest – dubbed the “Summer of Love” rally – New York Proud Boy Randy Ireland announced yet another forthcoming demonstration. Ireland said far-right activists would hold their next event on Sept. 18 at the Capitol in Washington, D.C., in support of far-right activists they believe have been unjustly imprisoned for their roles in the insurrection. “What we’re going through is a war on the U.S. Constitution,” he told the far-right crowd in front of a banner that read, “Free Our Political Prisoners.”

Ireland said the mother of Ashli Babbitt, who was fatally shot by a Capitol police officer during the Jan. 6 siege in Washington, would attend the September rally. Though the Office of Professional Responsibility deemed the officer’s conduct lawful, the far right is elevating Babbitt and the imprisoned insurrectionists as martyrs – figures who can galvanize the movement to carry out what they see as retributive justice against the state.

Sunday’s rally marked the one-year anniversary of a similar clash at a “Back the Blue” rally, where right-wing activists and counterprotesters fought in the street outside the Multnomah County Justice Center. Far-right demonstrators carried bats and metal rods, fired paintball guns and used pepper spray, while one Proud Boy pointed a handgun at the opposing side.

­The 2020 rally came after months of nationwide protests against police brutality in response to the murder of George Floyd in Minneapolis, protests the far right believed should be violently suppressed by the state, armed vigilantes and organized fascist street gangs such as the Proud Boys.

This most recent rally was marred by the same aggressive tactics the group has exhibited for years, often in the streets of Portland. Though its promoters claimed the rally was about “spreading LOVE not HATE,” Proud Boys and others mixed violent rhetoric with fantasies of martyrdom in statements they made to the press in the midst of the skirmishes. “I’m sick and tired and if we have to die to defend ourself, our families, and our fucking freedom in America, we’re gonna do it. We’re gonna lay our lives down,” Tusitala “Tiny” Toese said on footage captured by independent journalistic outlet News2Share. Toese was released from prison in December 2020, where he was serving time for violating his probation that stemmed from a 2018 assault.

One man with his face covered yelled, “You fucked around you found out today, baby!” – a menacing slogan popularized by the Proud Boys. Toese responded: “That’s our message to you, antifa. The Americans are coming out and we’re sick and tired of this shit. And if we have to fight fire with fire we’re gonna fucking do it.”

According to a report by Jason Wilson of The Guardian, about 200 far-right activists converged in an abandoned Kmart parking lot in northeast Portland. The clashes started around 4 p.m. after roughly 30 antifascists walked past the rally. The two opposing sides fought in the street, exchanging paintball fire, mace and fireworks. Airsoft guns were reportedly fired at members of the press. 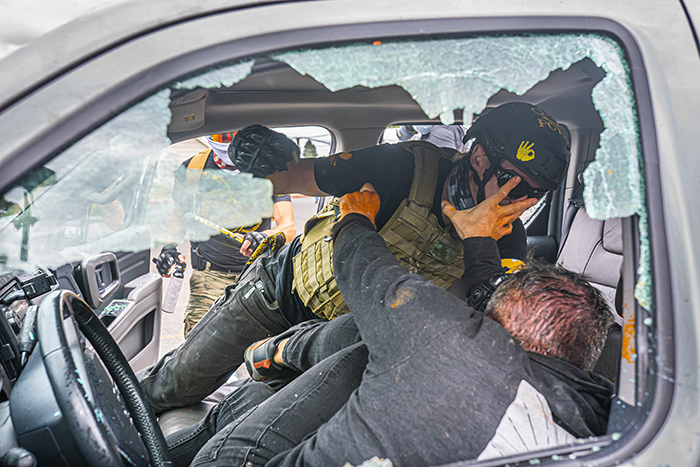 A member of the Proud Boys and a left-wing counterprotester fight in a truck on Aug. 22 in Portland, Oregon. (Photo by Nathan Howard/Getty Images)

Shortly after, Proud Boys attacked a man in a pickup truck. An image captured by photojournalist Nathan Howard shows a man wearing a Proud Boys shirt and a Proud Boys logo on his helmet as he attacks a bloodied man in the driver’s seat of the truck. Other members of the group smashed the vehicle’s windows and slashed its tires. A far-right contingent also attacked a medical van and its driver. Several men, including at least one bearing a Proud Boys insignia on his backpack, opened the driver-side door and shot paintball guns at the driver at extremely close range. After the driver fled though the passenger-side door, the far-right group moved their attention to the van, flipping it on its side. They spray-painted “FAFO” across the top – an acronym for the Proud Boy mantra “Fuck around and find out.”

Far-right activists and antifascists then made their way downtown, where shots broke out around 6 p.m. According to Wilson, who witnessed the altercation, antifascists followed a man “whom they were trying to eject from the area” before he ducked behind a trashcan, pulled out a handgun and began firing. “He fired at least two shots before an antifascist returned fire with their own handgun,” Wilson reported.

Police responded to the shooting and later confirmed that the man who allegedly fired the shots, Dennis G. Anderson, 65, was charged with unlawful possession of a firearm and unlawful use of a weapon.

Police were absent until the downtown shooting. They released a statement days before the rally noting that, while they were aware of the rally and the “significant community concern” it caused, people “should not expect to see police officers standing in the middle of the crowd trying to keep people apart. People should keep themselves apart and avoid physical confrontation.”

“As stated before today’s events, officers were not deployed to stand in between individuals intent on confronting one another. But that does not mean the crimes committed will not be addressed,” the Portland Police Bureau (PPB) said in a statement released Sunday night.

It is not the first time PPB has failed to mediate violent clashes involving Proud Boys. At the “Back the Blue” rally held last Aug. 22, police encouraged people to “self-monitor for criminal activity,” and blamed overtaxed resources for their decision not to intervene.

Police inaction in Portland can appear to far-right activists as tacit approval of their actions, especially after police repeatedly responded to leftist protests against police brutality with extreme force throughout a period of intense political mobilization in 2020. And, as Toese demonstrated at this most recent event, far-right activists can use the lack of police presence as an opportunity to anoint themselves the guardians of law and order. “If the cops won’t do it, we are. We’re willing to take the heat,” he said during Sunday’s clashes.

Since their formation in 2016, the Proud Boys have, with rare exceptions, faced few legal repercussions for the violence they have repeatedly committed in public. That has allowed them to build a nationwide network of far-right activists committed to using authoritarian, violent tactics to push a political agenda that included the Jan. 6 insurrection on the U.S Capitol.

Proud Boy leaders continue to organize, despite the fact that prominent members currently sit in jail awaiting trial for their roles in the Capitol siege. These men now act as political martyrs whom members of the far-right depict as “patriots” unjustly imprisoned for their political beliefs. The day before Proud Boy chairman Enrique Tarrio attended the Portland rally, he attended a “Free Our Political Prisoners” rally in Sanford, Florida. (In a video Tarrio posted of himself at the rally, one man is draped in a Confederate flag and several others hold a banner that reads “white lives matter” – a rallying cry of the white nationalist movement.) Tarrio was also sentenced this week to more than five months in jail after pleading guilty to stealing and burning a Black Lives Matter flag and bringing high-capacity ammunition magazines to Washington, D.C., in the days before the attack at the Capitol.

Leaders have also created a Telegram channel called “Free the Boys” to raise funds for recently arrested Proud Boys. The channel directs visitors to crowdfunding pages on GiveSendGo and Our Freedom Funding, as well as the mobile payment service Cash App. A similar Telegram channel for other people facing charges related to the insurrection has amassed more than 14,000 subscribers.

Proud Boys have continued to organize events around the country, harnessing local issues to fan the flames of the culture wars. At Vice News, Tess Owens cataloged 20 public appearances by the Proud Boys between the insurrection and late June, including anti-vaccine protests and pro-gun events. They have additionally attended multiple school board meetings across the country to protest critical race theory, an academic-concept-turned-right-wing-dog-whistle harnessed to stop schools from teaching children about how historical inequality and racism continue to shape society today. Proud Boys, including Tarrio, have attended anti-mask protests. All these activities are aimed at promoting the idea that the country is under attack by perceived authoritarian forces – be they antiracist teachers or public health officials – undermining faith in government and countering progressive social movements.

The Proud Boys have also continued to make inroads into mainstream politics amid their ongoing legal battles, something Tarrio earlier this year told Rolling Stone he was looking to prioritize. “There’s a pretty big percentage of people who think like us,” he said.

In Nevada, Proud Boys have tried to exert control over the local GOP. In Kansas City, Josh Wells, a Proud Boy running for school board, told undercover antifascists in April that he wants “white nationalism and or a pro-Western Christian theocracy with a protected white majority status. Whichever one is more obtainable.” Luis Miguel, an underdog U.S. Senate candidate in Florida, declared in July his commitment to the far-right activists who attended his campaign events: “Proud Boys, Oathkeepers and Threepercenters have often been the only ones defending innocent Americans from violent Antifa commies. I am PROUD to stand with these patriots.”

Even while Portland remains the epicenter of Proud Boy activity, the group poses a nationwide threat. “Bigoted and anti-democratic groups want to sow chaos to promote their dangerous and exclusionary agenda as an alternative to local government. So that’s exactly what they’re doing,” Eric Ward, executive director of Portland-headquartered Western States Center, said in a press release on Sunday.

“The idea that Portland, or any city, can single handedly defeat white nationalism is a fallacy,” he continued. “This is a national problem that demands national resources. Anti-democratic violence is a threat that strikes at the heart of who we are as a country. It’s time to act like it.”