Christopher Farrell, the director of investigations and a board member at prominent right-wing nonprofit Judicial Watch, was included on a membership roster of the antigovernment extremist Oath Keepers, according to leaked documents reviewed by Hatewatch.

Farrell’s leadership role in a prominent conservative nonprofit and his connection to the Oath Keepers may speak to the history of entanglements between establishment conservative organizations and extremists, many of whom were united in their opposition to President Barack Obama and now share in their emphatic support for former President Donald Trump. 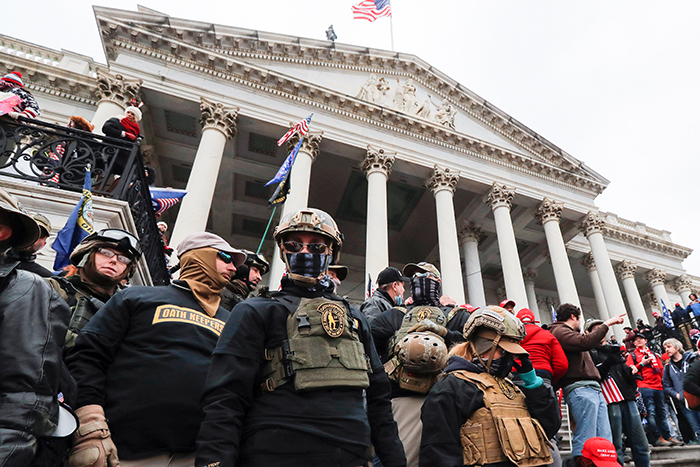 Members of the Oath Keepers militia group stand among supporters of U.S. President Donald Trump occupying the east front steps of the U.S. Capitol in Washington, D.C., on Jan. 6, 2021. (Photo via Reuters/Jim Bourg)

In response to Hatewatch’s request for comment on the leaked document, a spokesperson for Farrell did not dispute that Farrell had contributed money to the Oath Keepers but denied that it showed his support for the organization.

In an email, Brian Doherty of public relations firm CRC Advisors stated: “Mr. Farrell is not an active supporter, nor does he support the views of the Oath Keepers. About ten years ago he gave some small amount of money to what he believed to be a group of veterans and former police officers who were supporting the Constitution and opposing President Obama’s policies.”

Farrell is listed twice in the leaked document. The first membership status is listed as “Liberty Tree.” According to the Oath Keepers website, this membership sustains the group and provides the member with discounts on Oath Keepers merchandise.

Doherty said that aside from giving a small amount of money to the group, Farrell “also purchased a T-shirt. That was the extent of his involvement.”

But Farrell is listed as an “annual” member in another entry. The entry lists a different address and spelling of Farrell’s first name, but the same email and a comment: “I currently serve as the Director of Investigations and Research for Judicial Watch (1999 to present).” The entry is undated.

Doherty did not respond to follow-up questions about when Farrell’s Liberty Tree membership ceased, or whether Farrell purchased a membership more than once, as the membership document appears to suggest.

Transparency journalism collective DDoSecrets published the 5 GB leak on Sept. 27. The leak includes 40,000 text messages in group chats and 200,000 emails from each state chapter. DDoSecrets did not publish all the material it obtained from the leak but provided to Hatewatch the membership roster and a log of emails found in the Oath Keepers store directory. Hatewatch found Farrell’s name and email in the membership roster, and his email was present in the store directory.

Before reaching out to Farrell, Hatewatch confirmed that the personal details listed in the Oath Keepers membership database match details about Farrell.

Judicial Watch claims to be a nonpartisan, conservative watchdog organization, but the group pushes conspiracy theories and has partnered with the far right, including former Trump advisor Steve Bannon. It has no known partnership with the Oath Keepers.

Liberty Tree membership further provides training opportunities in the “Spartan” and “Sentinel” programs. Oath Keepers leader Stewart Rhodes announced the Spartan program in 2018, saying it was meant to prepare “Patriots” for “lethal force” to combat what he described as “antifa and far left” organizers at far-right events.

The leaks do not reveal if Farrell participated in specific “lethal force” training or other events.

Oath Keepers aim to recruit former military and police officers. Farrell fits the bill. He served as an Army intelligence officer, according to his Judicial Watch bio.

Although in his statement to Hatewatch, Farrell rejects the views espoused by the Oath Keepers, he has publicly espoused conspiratorial opinions in line with some of their views. He has publicly aired antisemitic conspiracy theories. Fox Business Network banned Farrell in 2018 after he falsely implied Hungarian-American billionaire George Soros, who is Jewish, controlled the State Department and provided support for a migrant caravan traveling from Central America to the U.S.

“A lot of these folks also have affiliates who are getting money from the Soros-occupied State Department, and that is of great, great concern,” Farrell said on Lou Dobbs’ Fox Business program.

The comments are a mix of two white supremacist conspiracy theories claiming that Jewish people run the U.S. government, and that Soros promotes immigration to change the demographics of Western nations, a variation of the “great replacement.”

“This episode was a repeat which has now been pulled from all future airings,” Schreier said.

Fox Business told multiple outlets that Farrell was banned from the network after the comments.

Rhodes has trafficked in similar conspiracies. After a gunman who pledged allegiance to the Islamic State terror group killed 49 people in the 2016 Pulse nightclub shooting, Rhodes said, “This wave of Islamist terror attacks will be part of a ‘perfect storm’ of intentionally orchestrated ‘Cloward-Piven’ chaos-inducing economic devastation, social and political disruption and violence, and the use of intentionally undefended borders and mass illegal and ‘refugee’ immigration as weapons of destabilization.”

These conspiracies are unfounded. Yet white nationalist talking points may be a contributing factor in episodes of hate-based deadly violence experienced in the U.S., New Zealand and elsewhere.

Judicial Watch has recently focused on litigation surrounding the Jan. 6 insurrection. The organization has filed at least four lawsuits and published thousands of pages of documents related to Jan. 6 after suing the Justice Department and D.C. law enforcement.

Much of the focus has been on Ashli Babbitt. A Capitol Police officer fatally shot Babbitt as she and other violent protesters attempted to breach the Capitol. Antigovernment extremists have made Babbitt a martyr. An Air Force veteran, Babbitt was a Trump supporter and follower of the far-right QAnon conspiracy movement.

Farrell is not a lawyer, and his name does not appear on Judicial Watch’s lawsuits related to Jan. 6. However, Farrell has written in support of the litigation.

Lawmakers eventually agreed to a bipartisan commission to investigate the insurrection. The commission held its first public hearing on July 27 and is ongoing.

“In light of recent events, I’m wondering what we are doing to distance ourselves from the members that chose to attend the Jan 6 fiasco at the Capitol,” a member wrote to Rhodes on Jan. 13.

The member concluded: “I may be out of line here but I’m just wondering if/when there will be a statement from you? The silence is almost deafening.”

Oath Keepers web support sent the member a boilerplate email response. The member did not respond to a Hatewatch request for comment.

At least four alleged Oath Keepers have pleaded guilty to charges related to the Jan. 6 insurrection, according to government filings.

Jason Dolan, 45, Mark Grods, 54, Grayden Young, 55, and heavy metal guitarist Jon Ryan Schaffer all pleaded guilty to charges stemming from their involvement in the insurrection in government court documents that alleged they were Oath Keepers. Dolan, Grods and Schaffer all appear in the membership roster.

Young does not. The Justice Department alleged in an indictment that Young’s involvement with the Oath Keepers began in December 2020, when he emailed the Florida chapter to “get involved.” It remains unclear why his name does not appear in the membership roster.

But leaks suggest the Oath Keepers were in disarray after Jan. 6.

The Oath Keepers faced financial troubles and organizational disarray in the early months of 2021, according to reporting from The Daily Beast that was confirmed by Hatewatch.

A few individuals sought to cancel their $50 annual memberships after the Oath Keepers failed to respond following payment. A person complained on Feb. 21: “I joined and paid my dues over a month ago and have heard NOTHING since. I’m extremely disappointed.”

Edward Durfee, an Oath Keeper and New Jersey state assembly candidate, responded the same day: “Both processing and membership has been affected by the lefty attacks. We are back online and manually processing payments … Your membership renews on 21 FEB 2022.”

Rhodes and the Oath Keepers organization also continued to ramp up their email fundraising efforts to funnel money into the struggling organization.