The D.C. Metropolitan Police Department’s Intelligence Bureau (IB) closely watched Black-led organizations and anti-racist groups for years while ignoring the growing far-right threat, according to Hatewatch’s review of leaked documents. Experts say this is in line with broader law enforcement attitudes toward such groups.

Hatewatch searched over 26,000 MPD email threads dated from May 2011 to December 2017. They contain surveillance logs of First Amendment demonstrations and monitoring social media, demonstrations and undercover surveillance of such groups as antifa and D.C. Black Lives Matter (DC BLM). Police even reviewed a tip about BLM based on reporting from The Gateway Pundit, a right-wing misinformation site that platforms far-right extremists.

A search of “BLM” and “Black Lives Matter” yields 51 combined hits. “Antifa” returns 53 hits. The emails include attachments with further uses of the terms. MPD employees mention the “alt-right” – a name for a faction of the far right that arose online in the mid-2010s – one time in the emails. Daniel Hall, MPD’s top civilian analyst in the IB, thought SNPR, a brand name for watch straps, was “some alt right [sic] phrase.”

The overwhelming majority of the emails come from Hall’s account.

Searching “far-right” yields no results that reference extremist groups, only phrases about locations of people and objects. “Nazi” yields eight hits – three from an email about an anti-fascist punching a neo-Nazi.

MPD employees drafted the emails and documents as the U.S. saw rising violence from the far right, which the Department of Homeland Security (DHS) considers the “most persistent and lethal threat,” according to an October 2020 report.

“White supremacy has been ignored by law enforcement,” Erroll Southers, professor of the practice in national and homeland security and former FBI agent, told Hatewatch.

“We know that overwhelmingly for the last decade, more than 76% of the domestic attacks in this country resulting in fatalities have been at the hands of the right wing,” Southers said, citing data compiled by the Anti-Defamation League.

Babuk, a group of ransomware attackers, leaked the trove of more than 70,000 emails and MPD documents in April and May. Hatewatch obtained the emails from Distributed Denial of Secrets, a transparency collective known for BlueLeaks, a massive release of law enforcement documents.

MPD acknowledged the attack in an unlisted YouTube video and in a statement to news site Gizmodo in April. The department has not commented further, nor has MPD challenged the veracity of the leaks in reporting on the documents. 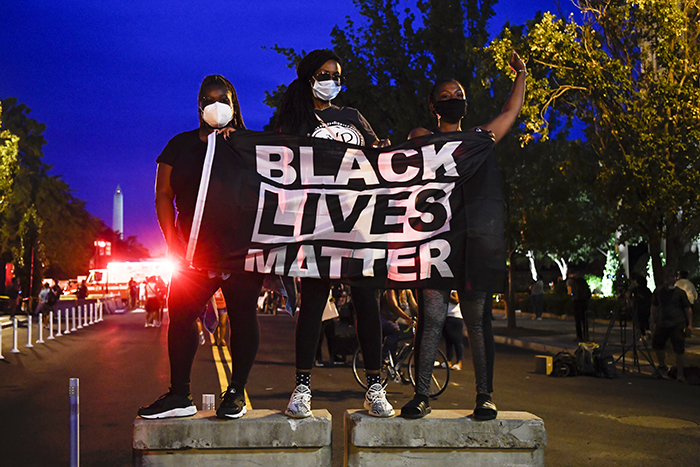 MPD did not respond to Hatewatch’s request for comment.

MPD focused on BLM so closely that the group was mentioned in three successive confidential bulletins addressed to the chief of police.

Hall forwarded his colleagues a Criminal Intelligence Branch (CIB) bulletin dated March 27, 2017, that said D.C. “has seen an increase in demonstrations relating to the inauguration of President Trump. The progressives are stating they will continue to demonstrate throughout his presidency against any and all agenda’s [sic] he tries to put forth.”

The “Black Lives Matter movement which was the last reports area of concern is still engaged. They are planning several demonstrations throughout the city once they have secured their agenda,” the bulletin continues. “Currently, they are chairing large gatherings at various churches with other protest groups to unify them in a common mission of support for each other. Once this comes to fruition, we believe their demonstrations will start to be more regular and crossover several issues at once.”

MPD first mentions BLM in the leaked emails on March 30, 2015, when a sergeant in the CIB and Homeland Security Branch of MPD asked if BLM and Empower DC, an organization that advocates for low and middle-income DC residents, were the same.

Hall responded: “It looks to me like they are separate entities, although they likely align on many issues. … The DC Black Lives Matter movement has traditional [sic] been more involved with how law enforcement interacts with minority groups.”

“Retweets still in the teens, I'm curious how many will actually show up,” Hall responded.

Hall sent an email to Janczyk with the subject “BLM activists heading to NC,” dated Sept. 24, 2016. It contained a tweet from DC BLM that said: “Movement family. As many travel to #Charlotte, be safe. Let’s also make sure ‘the work’ at home isn’t stopped while we’re gone. #LetsGetFree.”

The tweet appears to reference demonstrations after the fatal shooting of Keith Lamont Scott, a Black man, by the Charlotte-Mecklenburg police on Sept. 20, 2016. Demonstrators raucously protested Scott’s killing for days.

The IB forms part of the Joint Strategic and Tactical Analysis Command Center (JSTACC) under the HSB.

HSB works with federal agencies such as the Department of Homeland Security and the FBI through information-sharing initiatives called Fusion Centers and the Joint Terrorism Task Force (JTTF).

Michael German, a former FBI special agent and fellow with the nonpartisan Brennan Center for Justice’s Liberty and National Security Program, told Hatewatch the documents show MPD and the JTTF “focused on tracking Black Lives Matter protests for years, and also … they aggressively monitor social media for groups that they disproportionately target.”

April Goggans, a lead organizer with DC BLM, claimed in a 2017 lawsuit that MPD began physically monitoring her in 2015, including parking a cruiser across the alley from her bedroom that September.

The lawsuit sought documents related to MPD’s “monitoring and surveillance” of Goggans after MPD said it would not respond to her public information request, which the department considered too broad.

MPD admitted it had “thousands of documents that could potentially refer to Goggans” but none that were “relevant” to her request, local outlet DCist reported.

A D.C. Superior Court judge ruled in favor of MPD in March 2019, saying the department met its obligations under the request.

Goggans and DC BLM did not respond to requests for comment.

The tip said a link from Facebook page called “The Truth about Donald J. Trump” led to an article on The Gateway Pundit that alleged BLM “called for white people to give them their possessions and then proceeded to call for ‘killing people,’ and ‘killing the White House.’”

Hall responded: “FYI for now, its [sic] been sent to secret service as well since it involves a threat to the President. Going through now ot [sic] see if there is any DC nexus or threats to law enforcement of [sic] Govt Officials.”

This included disinformation from parody websites that poked fun at the right-wing conspiracy theory of “paid protesters” according to San Jose Inside, a local outlet in California’s Bay Area.

“Even a blind squirrel can find a nut sometimes. I’m not saying it’s never appropriate to source something to [right-wing sites], but there needs to be a lot of context,” German said.

In September 2017, Janczyk sent Hall a link to a thread on Kiwi Farms, a forum for users who track and often dox online personalities. The thread contains a discussion about a Twitter account named yesyoureracist, which was outing attendees of the 2017 deadly far-right rally in Charlottesville, Virginia. Users posted screenshots of antisemitic references to the account holder.

“Didn’t we discuss this account a few weeks ago?” Janczyk asked.

“Haha, yes we sure did,” Hall responded.

The emails do reference some far-right violence. A white supremacist killed nine Black people at a church in Charleston, South Carolina, on June 17, 2015. The shooting was partly inspired by the “great replacement” conspiracy that white people are being replaced by people of color and immigrants.

Hall wrote an email flagging white supremacist iconography featured on the shooter’s clothing: “I’m not sure if there is any hate group movement like that in the area, but I just wanted to send this out to the Threats side just in case we have any similar chapters in the area.”

In December 2016, Edgar Welch shot a military-style assault rifle into Comet Ping Pong, a D.C. pizza restaurant. Welch was an adherent of the “PizzaGate” conspiracy theory that liberal political elites were trafficking children out of Comet. QAnon later subsumed this and other far-right conspiracies.

Hall mentions Comet Ping Pong twice in the emails: First on Jan. 19, 2017, a day before the inauguration of former President Donald Trump. Hall asked for “one intel team [to] respond to comet ping pong for protesters.” These were “ anti-gay” demonstrators, according to Grub Street, a blog published by New York magazine.

Hall then said on Feb.16, 2017, that an arts organization in downtown D.C., was the target of “fliers similar to the accusations of Comet Ping Pong.”

The far right rallied behind Trump. Searching the email threads for “Trump supporters” yields 34 hits. Twenty-six hits come from a “running resume” or real-time summary of the Mother of all Rallies (MOAR), which occurred on Sept. 16, 2017.

MOAR was a rally in support of Trump. C-SPAN video shows far-right extremist groups such as Patriot Prayer and the Proud Boys attended the rally. Emails do not contain either group’s name.

Antifa, short for anti-fascist, is a decentralized movement that organizes against racism and the far right. D.C. law enforcement violently confronted Antifa and other protesters on Jan. 20, 2017, the day of Trump’s inauguration.

On Jan. 18, 2017, HSB Detective Jeffrey Madison shared a map of D.C. and a welcome packet prepared by a coalition of anti-Trump protesters. Madison also attached reports from an individual who attended two meetings. The emails appear to show MPD had an asset inside the coalition.

Madison wrote to colleagues: “The map is very sensitive until we see on any open source site. They believe it will not be put out and were very guarding of it.”

The presentation, which Al Jazeera first reported, says antifa is “by far is the most violent we have dealt with over the years.”

It continues: “They have no moral compass on who they go after.”

Valerie Wexler of Stop Police Terror Project DC, who is familiar with the trove of documents, told Hatewatch she views MPD’s actions as improper surveillance.

Wexler said the trove “is horrifying but not surprising. Anti-racist organizers have long known that they were being surveilled and are often harassed, especially Black activists.”

Police violently confronted protesters in D.C. The American Civil Liberties Union sued on Aug. 11, 2021, on behalf of two journalists, Oyoma Asinor and Bryan Dozier, who claim MPD used chemical irritants and stun grenades against members of the press and demonstrators at Black Lives Matter Plaza, which became a focal point for protests against police brutality.

“Last summer, police turned D.C.’s streets into a war zone,” Asinor said in a press release. “I found a voice photographing protests against police brutality but ended up fleeing it myself.”

Law enforcement may have changed its priorities after the Jan. 6 insurrection that attempted to keep Trump in office.

But Wexler is not hopeful. She pointed to law enforcement’s response to Floyd Ray Roseberry, who drove a pickup truck to the Library of Congress filled with explosives on Aug. 19.

Roseberry streamed a bomb threat via social media, demanding airstrikes against Afghanistan, calling for Biden’s resignation and complaining about the U.S. healthcare system and immigrants.

Roseberry, who is white, “was somehow peacefully apprehended,” while Antwan Gilmore, a Black man found sleeping in his car, was killed by an MPD officer on Aug. 25, Wexler said.

MPD alleges Gilmore had a gun and drove forward after police told him to stop.

To address violence against Black and brown civilians by police and weed out problem cops, Southers – who was not referring specifically to MPD’s IB, but broader issues in policing – recommended changing disciplinary and selection processes inside police departments.

For Southers, bias against people of color and a focus on anti-racist protesters is “a cultural issue” and “not a training issue. You cannot train bias and prejudice out of someone.”