The House committee investigating the storming of the U.S. Capitol building on Jan. 6, 2021, subpoenaed white nationalist activist Nick Fuentes on ­­Wednesday night, sharpening the public attention on his “America First” group’s involvement in the run-up to the event.

Fuentes, 23, responded to the subpoena hours after the committee released a statement about it by saying he would likely plead the Fifth Amendment unless someone televised the proceedings. 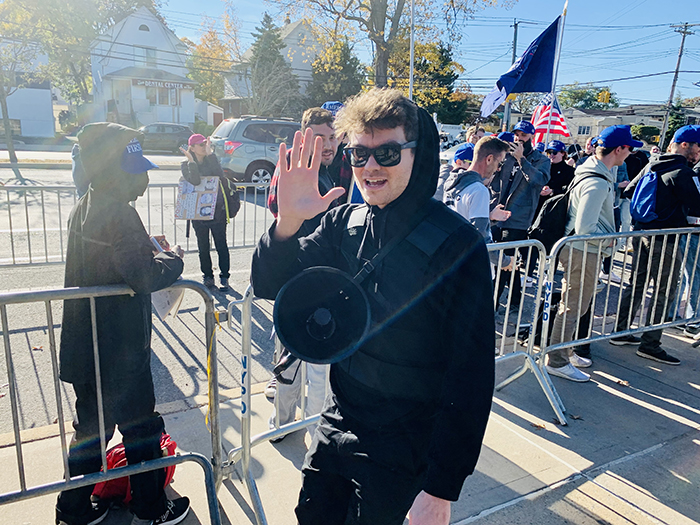 Fuentes uses the slang word “Groypers” to represent his young, almost exclusively white male fanbase. He galvanized crowds of such young men at so-called Stop the Steal events across the country following former President Donald Trump’s loss, where Fuentes and others promoted lies about the 2020 election. Fuentes never went inside the Capitol building himself on Jan. 6, but he wore a VIP badge to Trump’s speech and addressed supporters outside the Capitol building during the insurrection. It is unclear whether the Trump administration knew of Fuentes’ appearance at the event. As Hatewatch previously reported, Fuentes appeared to encourage insurrectionists during his speech, telling them at one point to “break down the barriers and disregard the police.” Another video captured that day showed someone waving Fuentes’ branded America First flag inside the building while the violence unfolded.

Fuentes, whose devoted fans often travel to see him speak in public, has on his livestreams praised fascist figures such as Mussolini and talked about giving Trump a Hitler salute. He has also repeatedly expressed enthusiasm for what happened on Jan. 6.

“I started out the show earlier saying, ‘Happy January 6,’” Fuentes said in a livestream this year on the first anniversary of the Capitol insurrection. “This is a holiday. This is a historic moment for us. We should celebrate that it happened, absolutely. And I said this on Telegram late last night, after midnight so it was technically January 6, I don’t regret a thing about my actions on January 6, and I don’t regret … anything that I did leading up to it in the three months prior, since Nov. 3, 2020.”

Fuentes continued, portraying the storming of the Capitol as a seminal moment for his extremist cause.

The Fuentes subpoena comes amid a flurry of actions taken by the Jan. 6 committee in recent months. The committee also sent a subpoena to Patrick Casey, the former leader of the now-defunct white nationalist group Identity Evropa. Casey, also a livestreamer, has played a supportive role to Fuentes and his America First group following Identity Evropa’s collapse.

Fuentes has claimed other consequences to his support of the Stop the Steal movement. He said in April 2021 on a livestream that the government seized his wealth in the aftermath of the attack. Fuentes traffics in cryptocurrency, and donors gave him tens of thousands of dollars’ worth of it during Jan. 6’s run-up. The committee’s press release mentions a donation he received from French computer programmer Laurent Bachelier. Fuentes boasted from the messaging app Telegram that he received “hundreds of thousands” of dollars in Bitcoin following the publication of the release on Wednesday.

Fuentes stands out among other white nationalists because of his public alignment with elected and formerly elected Republican politicians. Stop the Steal supporter Paul Gosar, an elected congressman from Arizona, appeared at Fuentes’ AFPAC event in February 2021. Steve King, the former Republican congressperson from Iowa, attended the same event. Arizona state Sen. Wendy Rogers has praised Fuentes by name on social media.

Fuentes has persisted in making public appearances following Jan. 6, but his rhetoric and style have taken on a more paranoid, religious air in recent months. Hatewatch attended a Fuentes-led event outside Staten Island University Hospital in New York on Nov. 10 and found the white nationalist speaking out against COVID-19 vaccine mandates to a crowd of around fifty fans, while wearing a bulletproof vest and pointing to a large crucifix in the crowd.

He has also become more explicit in expressing solidarity with white supremacists. In his livestream responding to the Jan. 6 subpoena on Wednesday night, he repeatedly compared himself to Andrew Anglin, editor of the neo-Nazi website The Daily Stormer.

“I’m trying to get out a very important message about white genocide and the destruction of our people,” he explained about his own activism.

Fuentes has also sharpened his tone when speaking about law enforcement and the federal government in the year that followed Jan. 6. He has formed a habit of warning his fans against speaking to federal law enforcement under any circumstance. The committee’s press release claims that the FBI has scrutinized Fuentes’ funds.

“Do not talk to the feds. If they start asking you questions, do not answer one of them. If they come to your door, they say, ‘Can we ask you a few questions?’ You say, ‘Not without my lawyer present,’” Fuentes said on a January livestream.

“These people are pigs. That’s what they are. Pigs. They roll around in the mud like dirty little pigs.”