When Alex Jones pushed the election fraud conspiracy “Stop the Steal” campaign in the run-up to the attack on the U.S. Capitol on Jan. 6, 2021, his words appear to have driven significant traffic to his multimillion-dollar business.

Hatewatch analyzed four years of domain ranking data on Jones’ Infowars Store from the internet security company Cisco. The data show the prolific and influential conspiracy theorist Jones faced a decline in the popularity of his store prior to Stop the Steal, but a rise during November 2020, December 2020 and the first days of January 2021. This rise in traffic hit levels the extremist had not generated since the early days of President Trump’s administration. 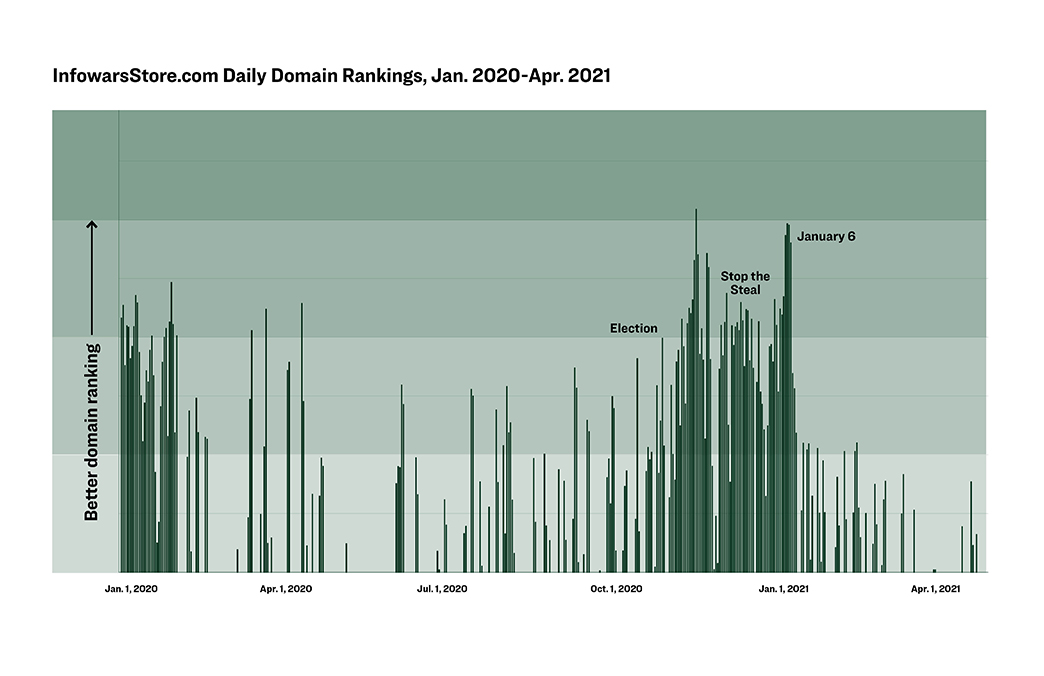 Hatewatch’s finding shines new light on profit-driven incentives Jones and other far-right influencers may have seen while supporting former President Trump’s election lies, as his supporters gathered to protest across the country. Jones, whose Infowars Store made $165 million in the three years from 2015-18, according to documents first obtained by HuffPost, has in private expressed revulsion over Trump.

Hatewatch previously reported on a leaked video of Jones saying in January 2019, “I’m so sick of fucking Donald Trump, man. God, I’m fucking sick of him.” Despite saying these words on camera, Jones went on to stoke anger among Trump’s supporters by perpetuating the ex-president’s inflammatory claims about election rigging that never happened. Jones promoted Trump’s Stop the Steal lies in a speech to Trump’s supporters on Jan. 5, 2021, in Washington, D.C., less than 24 hours before some of them went on to attack the Capitol.

“We have only begun to resist the globalists. We have only begun our fight against their tyranny. They have tried to steal this election in front of everyone,” Jones said on the eve of the attack on the U.S. Capitol. 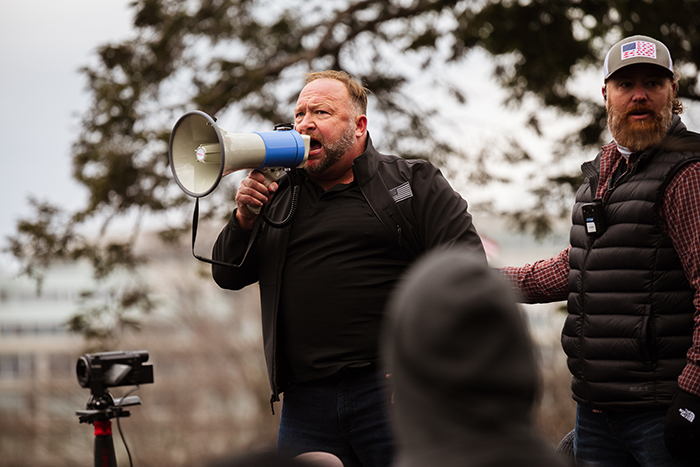 Alex Jones, the founder of right-wing media group Infowars, addresses a crowd of pro-Trump protesters after they storm the grounds of the Capitol Building on Jan. 6, 2021 in Washington, D.C. A pro-Trump mob stormed the Capitol earlier, breaking windows and clashing with police officers. Trump supporters gathered in the nation's capital today to protest the ratification of President-elect Joe Biden's Electoral College victory over President Trump in the 2020 election. (Photo by Jon Cherry/Getty Images)

Cisco, a network security technology company, releases their “Umbrella Popularity List” of top 1 million domains each day. Hatewatch collected nearly 2,000 of these files and extracted daily performance data for hundreds of domains, including Jones’ store, to demonstrate Stop the Steal’s impact on his business. Social media companies like YouTube, Facebook and Twitter removed Jones from their platforms during the summer of 2018, and Apple’s App Store dropped the Infowars app from its service. The data shows that although Jones maintained a steady stream of traffic to his store in the immediate aftermath of those suspensions, it declined steadily during 2020. The Stop the Steal era resurrected Jones’ brand, based upon the data Hatewatch reviewed. 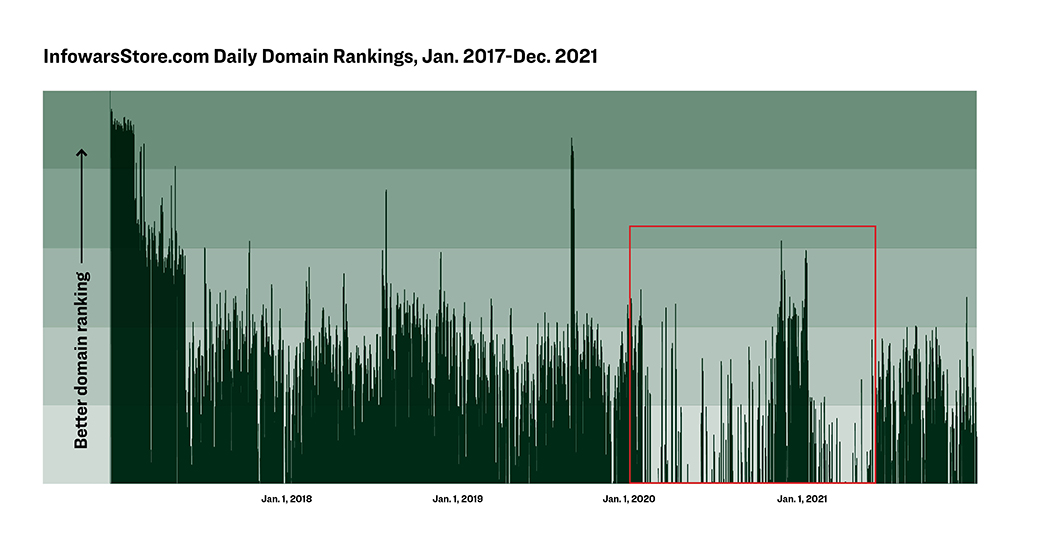 Jones set up his Infowars store on a separate website from the platforms through which he promotes his conspiracy theory-driven livestreams and videos, like Infowars.com and Banned.video. This separation enabled Hatewatch to analyze interest in Jones’ operation of selling supplements and other goods to his customers apart from the content he creates as an antigovernment conspiracy theorist and extremist. Jones sells a myriad of products through his store, including hair care products and vitamins. He has developed a reputation for making unfounded claims in support of the nutritional value of his products.

In November 2021, a Connecticut judge found Jones liable by default for damages related to his actions in the aftermath of the 2012 Sandy Hook shooting, when he created and amplified disinformation suggesting that the attack that killed 20 primary school children and six adults had never occurred, and that the parents of dead children played a role in covering up for what happened. As part of the legal settlement against him, Jones claimed $ 6.2 million in assets in January 2022.

But Caolan Robertson, the videographer who leaked video to Hatewatch of Jones saying, “I’m so sick of Donald Trump,” said that Jones boasted of making $60 million in 2018 alone, a figure that is closer to what HuffPost reported about Jones’ store pulling in over a three-year span. Robertson also said that Jones mocked the gullibility of his viewers in a private conversation with him. He said Jones told him that his audience would “buy anything” and that he could “sell them dick pills.” Jones did not reply to a request for comment.