Not long after a man shot to death at least 10 people on Saturday, May 14, in what local officials called a “pure evil,” “racially motivated hate crime,” influencers hustled to spread false narratives online that ignored the overwhelming evidence showing this attack was an act of white supremacist violence. 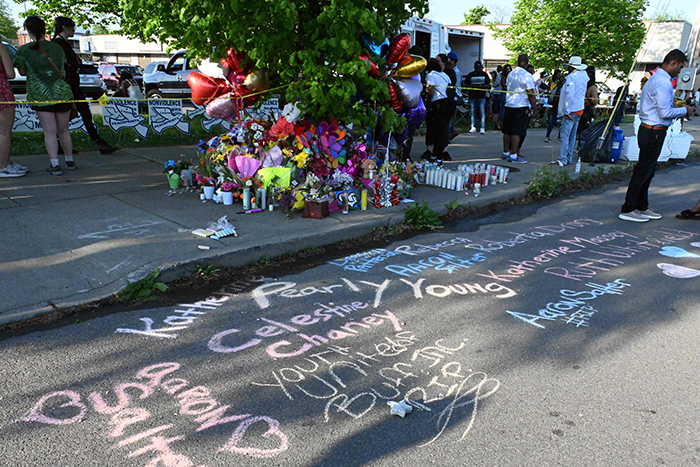 Messages, balloons and flowers are pictured at a makeshift memorial near a Tops Grocery store in Buffalo, New York, on May 15, the day after a gunman shot dead 10 people there. (Photo by Usman Khan/AFP via Getty Images)

As white supremacist violence has emerged as a predominant threat to national security and a recurrent topic in the news, the far right has increasingly leaned on disinformation campaigns to deny or distort that reality. Extremists and collaborators often use the tactic of suggesting liberals, leftists or the federal government staged acts of far-right terrorism. One recent example is usingTwitter’s trending topics to float the lie that antifa caused the attack on the U.S. Capitol on Jan. 6, 2021. Polls showed that many Republicans ultimately believe such lies, proving the effort successful.

Cernovich, who pushed the #Pizzagate and #StoptheSteal campaigns, is primarily known for creating and amplifying politically charged disinformation on Twitter. “Today’s terrorist attack will be politicized and lied about,” he posted to Twitter on the evening of May 14. “The man was under demonic influence. Completely incoherent ‘ideology.’ Hybrid of Nazism with Green New Deal leanings. He called himself a left-wing ‘green nationalist.’”

Prior to the Buffalo grocery store attack, the man in custody appears to have distributed a sprawling document online laying out his grievances and his justifications for the shooting. In it, he embraces fascist and white supremacist ideologies and makes clear they drove him to kill. (The alleged killer pleaded not guilty to the charges against him in court.) The views he allegedly espoused do not preclude concern for the environment. Both the white power and nativist movements in the U.S. sometimes espouse conservationist views, typically to blame immigration for environmental decay.

Additionally, the alleged killer made no mention of the Green New Deal policy that Cernovich referenced, and it is not even initially clear whether he does indeed consider himself a “green nationalist”. Hatewatch determined that the section of the propaganda document in which the author refers to himself as a “green nationalist” was plagiarized: The alleged killer appeared to copy it word-for-word from a similar propaganda document authored by the Christchurch killer, a white supremacist terrorist who murdered 51 worshippers in a New Zealand mosque in 2019.

Cernovich returned to the issue a day later to claim that “regime propagandists” radicalize shooters, echoing a phrase that far-right figures sometimes use to describe the media. He defended Fox News host Tucker Carlson, who has drawn criticism for pushing white supremacist talking points that bear similarities to those made in propaganda authored by terrorists.

“Terrorists are indeed being radicalized,” Cernovich published to Twitter on Sunday, May 15. “Not by Fox News or Tucker. But by the regime propagandists.”

In the propaganda document the suspect allegedly published, he linked to Breitbart, a low-standard, anti-immigrant publication. Cernovich has built a collaborative relationship with Breitbart. He regularly contributes to Breitbart platforms, and he appeared on a Breitbart-owned podcast less than a week before the Buffalo attack, claiming that leftists are “genociding Christians.” (The alleged killer did not reference Cernovich’s Breitbart content.) Cernovich allegedly hosted a gathering that included prominent white supremacists outside the 2016 Republican National Convention in Cleveland and has recommended to his followers that “alt-right” people give money to white nationalists. 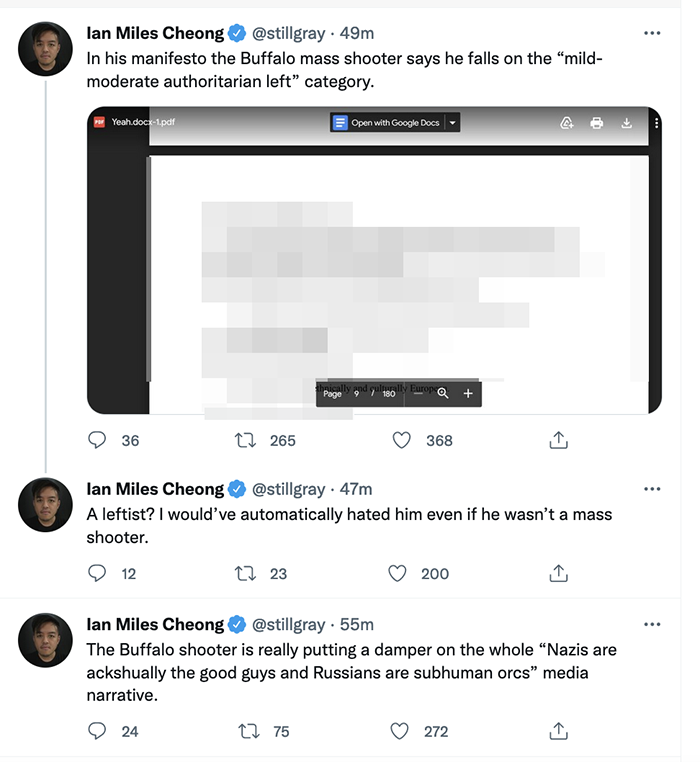 Ian Miles Cheong tweeted these comments in the wake of Saturday's deadly shooting at a grocery store in Buffalo, New York.

“A leftist?” Cheong posted around the same time Saturday as Cernovich, also referring to the green nationalist remarks the alleged shooter made in the document he posted online. “I would’ve automatically hated him even if he wasn’t a mass shooter.”

Cheong, who frequently posts false or misleading details about American politics despite not having any apparent ties to the U.S., also used the alleged terrorist’s inclusion of a Nazi sonnenrad symbol to conflate the attack with the Azov Regiment in Ukraine. Azov is a small, ultra-nationalist volunteer unit in the Ukrainian National Guard that is part of the force defending Ukraine against Russia’s ongoing invasion. Some members of Azov and its supporters have incorporated the sonnenrad as part of their aesthetics, applying it to patches or other paraphernalia, along with other neo-Nazi imagery. In the tweet, Cheong cited an emblem, which features a sonnenrad on the backdrop, that Azov has used but is not currently considered its main logo.

Hatewatch reviewed the alleged Buffalo terrorist’s propaganda document and found that he made no mention of the ongoing conflict in Ukraine or the Azov Regiment. As with the document’s references to environmentalism, Hatewatch found that the author only mentioned Ukraine in passing in a section that was copied word-for-word from the document authored by the Christchurch killer.

Other fringe internet figures promoted the same claim as Cheong, seeking to make the breaking news event about the conflict in Ukraine rather than U.S. white supremacist terrorism.

Embattled white nationalist Nick Fuentes published a link to news of the shooting on the afternoon of May 14 on his Telegram account alongside three words: “New false flag.” Fuentes’ comment fed into a campaign among far-right extremists to suggest that the federal government staged the Buffalo terrorist attack to clamp down on civil liberties. To distance themselves from responsibility for radicalizing people, white supremacists often move quickly to the narrative that terror attacks are completely staged.

Hatewatch found scores of examples of extremists claiming the shooter or the attack itself “glows.” The term “glow” in this context refers to a slang that connotes the FBI or CIA involving themselves in an event for strategic purposes or creating it.

“Buffalo absolutely glows,” the white supremacist Twitter user @PatrickBasedmn posted on the afternoon of May 14. 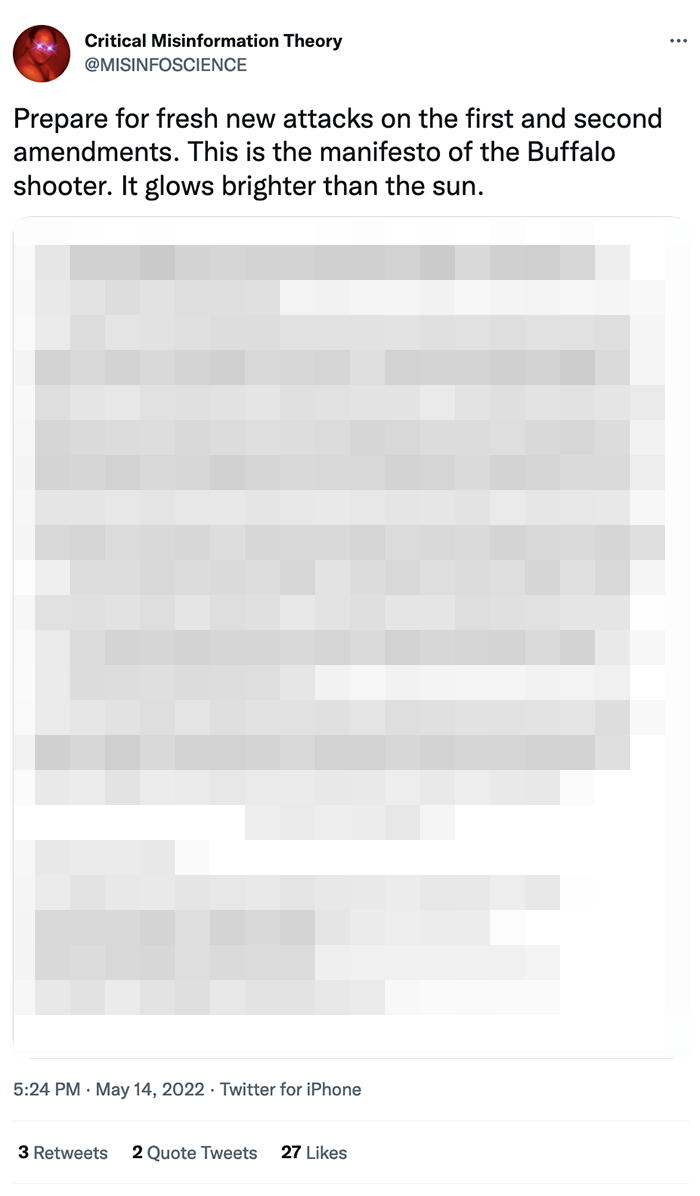 Another white supremacist user, @MISINFOSCIENCE, laid out what they claimed to be the motive behind the conspiracy theory and posted snippets of the alleged manifesto.

“Prepare for fresh new attacks on the first and second amendments. This is the manifesto for the Buffalo shooter. It glows brighter than the sun,” they posted to Twitter around the same time.

Other white supremacists and collaborators relied on misdirection as opposed to disinformation. These influencers told their audiences to consider crimes committed by Black people as a way of distracting from the horror of the attack.

The alleged killer cited the white nationalist nonprofit VDARE in the propaganda document he allegedly authored. Following the attack, that group published a blog post purporting to show white people as being less responsible for mass shootings in 2022 than other races. Prominent neo-Nazis shared the post on Gab, Telegram and other fringe sites.

Such hard-right figures as lawyer Will Chamberlain brought up other perpetrators of violence, including James Hodgkinson, the man who shot at Republicans playing a charity baseball game in 2017, injuring Rep. Steve Scalise of Louisiana. The extremist Jack Posobiec referenced Frank James, a 62-year-old Black man who posted hateful things to social media in advance of allegedly shooting and injuring dozens of people on April 12.

“Are we allowed to talk about the NY subway shooter’s posts now?” Posobiec posted to Twitter on the morning of May 15.

Posobiec commonly guides his Twitter followers to dismiss right-wing violence while exaggerating or misleading them about the threat of left-wing extremists. Over 4,000 people shared his post about the New York subway shooter within a span of 12 hours on Sunday.

Hannah Gais contributed to this report.