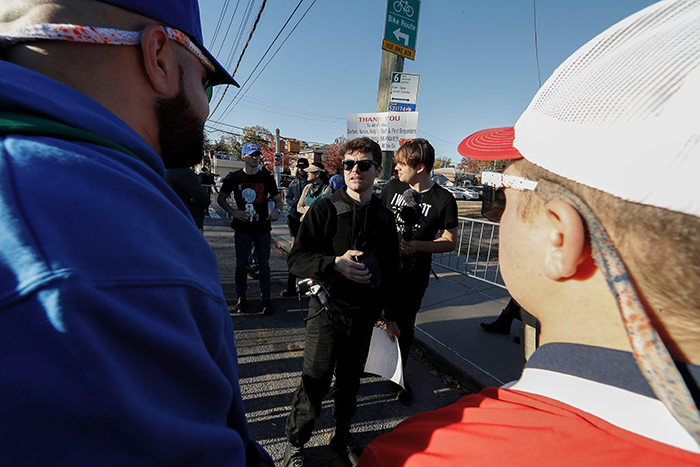 The defections potentially hinder Fuentes’ publicly stated ambitions to create a mass political movement in the U.S. and force him to repair his brand among white nationalists while already facing significant public scrutiny.

Law enforcement, mainstream reporters and such groups as SPLC have paid closer attention to Fuentes since Jan. 6, 2021, when he rallied crowds of young, male extremists to pro-Trump events in the runup to the attack on the Capitol. 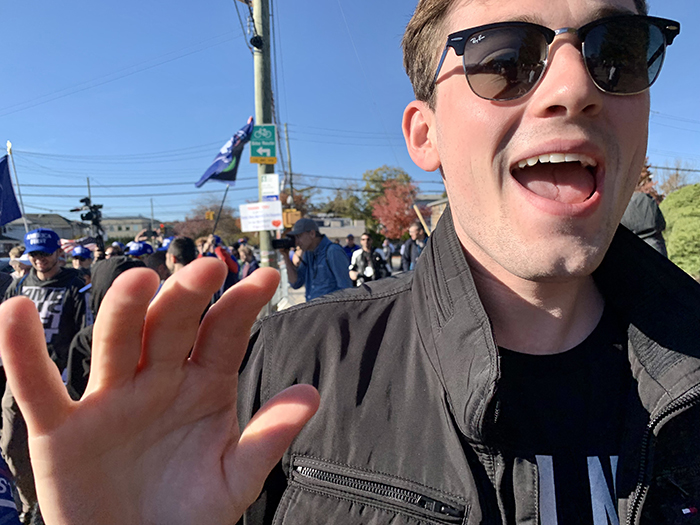 The defections include sidekick personality Jaden McNeil and techie Simon Dickerman, two key players in Fuentes’ coalition. The significant role these men played in building up Fuentes and America First should not be understated.

McNeil, also a livestreamer, has in recent years presented himself as a complementary figure to Fuentes, appearing with him at events including the Donald Trump rally at the Capitol on Jan. 6, 2021, and Fuentes’ “Vax Watch” protest in New York City in November 2021.

Dickerman, who has bounced around white nationalist collaborations since 2017, helped build America First’s online infrastructure and co-created some of the propaganda films the group has used to recruit followers.

Throughout May 2022, anonymous posters on the forum Kiwi Farms, which is dedicated to harassment of Internet personalities, seized the opportunity to exacerbate the effect of these defections. In the days following the defections, the volume of posts created on Kiwi Farms in response to the infighting inside America First became so high that the site administrator created a separate area of the site to hold those discussions. This area of the site now contains over 47,000 messages heaping derision and accusations of hypocrisy on Fuentes and his followers.

The public defection of key collaborators including McNeil and Dickerman is only the latest in a series of setbacks Fuentes and his followers have encountered since the Jan. 6, 2021, insurrection.

Fuentes lost access to Twitter in July 2021 following a Hatewatch report about how the far right exploits that platform. YouTube had already suspended Fuentes on Feb. 14, 2020, and he also lost access to the youth-focused livestreaming site DLive in January 2021, representing a significant blow to his ability to make money, as Hatewatch previously reported.

Fuentes and his allies launched a livestreaming and fundraising hub called Cozy.TV, filled with many figures who have been suspended from mainstream social media sites. Fuentes needs that platform to succeed to have a chance of building a successful movement.

The House committee investigating the attack on the Capitol subpoenaed Fuentes in January, and the extremist told his fans in May that he remains at the center of a federal criminal investigation.

Presenting other obstacles for Fuentes, Hatewatch also identified previously pseudonymous America First associates, including a man named Jozef Gherman, who lost over $300,000 for investors as part of a cryptocurrency “solicitation scheme,” according to the Commodity Futures and Trading Commission (CFTC).

Timothy “Baked Alaska” Gionet, another collaborator who livestreamed from inside Nancy Pelosi’s office on Jan. 6, 2021, faces legal trouble, having lost a plea deal on a federal misdemeanor charge after declaring himself innocent.

Patrick Casey, another prominent livestreamer, also has distanced himself from Fuentes after attending Trump’s rally with him on the day of the insurrection.

Fuentes did not respond to a request for comment on this analysis. He acknowledged he would make changes to America First during the thousandth airing of his livestream show on May 24. “Many people have come and gone,” he said.

McNeil and Dickerman disavowed Fuentes on a YouTube livestream called “Kino Casino,” which is hosted by far-right YouTube performers “PPP” and Andy Warski. In the nearly five-and-a-half-hour stream, McNeil and Dickerman leveled accusations at Fuentes, suggesting he mishandled and obfuscated America First’s finances following the scrutiny he faced from the government after the insurrection. (Fuentes denied this to his fans in a livestreamed response.)

McNeil and Dickerman described Fuentes as carrying a huge ego, comparing himself to former Soviet leader Joseph Stalin, Jesus Christ and American rapper Kanye West. (Fuentes has described Stalin as his “hero.” Likewise, in another recent livestream, Fuentes described the criticism he faces as natural for “any creator, whether it’s God or me.”) McNeil and Dickerman also accused Fuentes of belittling his supporters.

The pair of white nationalists also insinuated that Fuentes attempted to pry into the sex lives of his followers and exert control over them. (Fuentes did not appear to deny these accusations in his response.) McNeil specifically claimed that Fuentes opposed his having a girlfriend and boasted about searching his furniture with a blacklight to look for semen stains.

Fuentes and his movement promote an explicitly anti-LGBTQ agenda and commonly target gay and bisexual men with hate and derision.

Dickerman also claimed that people in America First felt “stuck” with Fuentes and that the figurehead made it difficult for others to leave him. (Fuentes denied this accusation in his livestream response.) Dickerman also claimed that Fuentes artificially inflated the counter showing how many people were watching his own Cozy.TV livestreams, which Hatewatch is unable to confirm. The Atlantic Council’s Digital Forensics Lab (DFRLab) examined Dickerman’s allegations but found the evidence insufficient to prove Fuentes manipulated his livestreaming service to make it appear more watched than it is.

Fuentes addressed the defections on the evening of May 10 through a livestream on Cozy.TV. He encouraged his followers to raise their right hands and pledge their “loyalty” to him by repeating the following words: 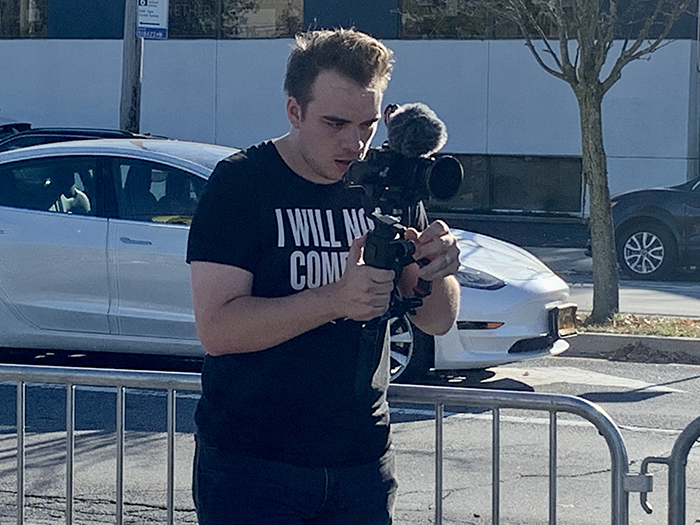 Fuentes also claimed that he previously attempted to sue Dickerman for undermining America First. Just six months before Fuentes made this claim, Hatewatch photographed Dickerman while he filmed an America First event in New York City. Fuentes, Dickerman and McNeil all appeared together at the event, which expressed opposition to COVID-19 vaccines.

Fuentes also detailed his current legal situation, claiming that McNeil and Dickerman attempted to discuss a complex situation they did not understand.

“The last thing I was told by the Department of Justice is that my assets and me remain a target of the Department of Justice and of the FBI. That's the last thing I've heard,” Fuentes told his audience. “When I was subpoenaed in January ... the letter that was written to me by the House Select Committee Investigating January 6th said and acknowledged that I remain under investigation, that my assets and myself remain under investigation by the DOJ and the FBI.”

A familiar fate for white nationalists 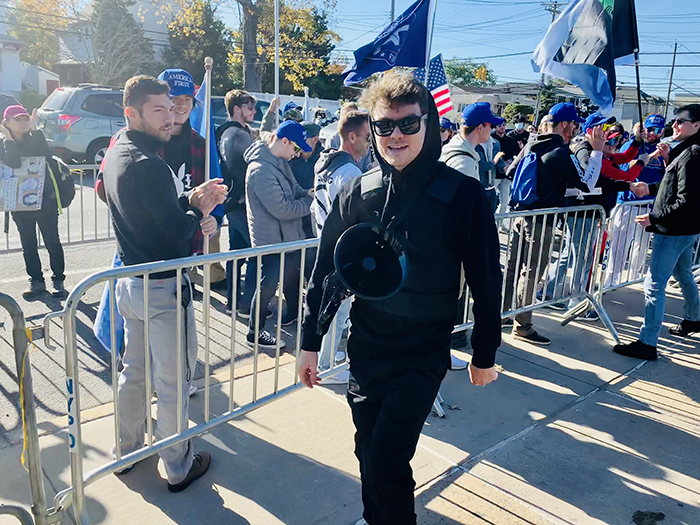 Fuentes helped repackage white nationalism in the aftermath of the deadly Charlottesville, Virginia, “Unite the Right” event in 2017 by tying his personal brand to the presidency of Donald Trump. He recruited sitting members of Congress including Rep. Paul Gosar and Rep. Marjorie Taylor Greene to his America First Political Action Conference (AFPAC), which has run parallel to the bigger Conservative Political Action Conference (CPAC) for each of the last three years, generating widespread media attention and also condemnation.

Fuentes, now 23, appeared at “Unite the Right” as a teenager. He possessed a smaller profile in 2017, and managed to avoid the legal pressure and scrutiny that white nationalist leaders like Richard Spencer and Jason Kessler faced in its aftermath. For a few years, Fuentes and America First sought to present a viable alternative to the so-called “alt-right” movement that started to fall apart due to infighting, financial troubles and other scandals following the murder of antiracist activist Heather Heyer in Charlottesville at that rally.

Now, over a year removed from the violent attack on the Capitol on Jan. 6, 2021, Fuentes’ prospects have dimmed. Without accounts on mainstream social media websites and payment platforms, he has lost access to fans, and his fundraising ability has been sharply curtailed. Mismanagement and internal squabbles now plague his own organization, and his coalition is losing people. Fuentes’ story evokes comparisons to other figures of the racist right whose moment in the spotlight exposed apparent flaws.