The far-right Proud Boys have ramped up a campaign aimed specifically at attacking LGBTQ rights and reproductive justice. 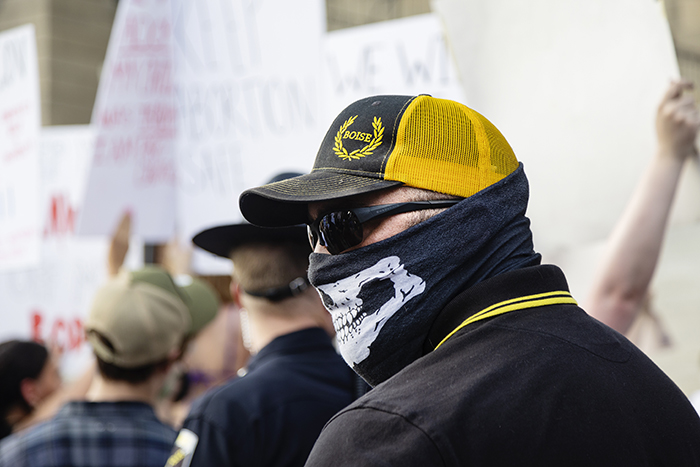 A member of the Proud Boys stands between a group of anti-abortion people attending a celebration and a group of protesters demanding the right to abortion outside the Idaho Statehouse in Boise, Idaho, on June 28. (Photo by Sarah A. Miller/Idaho Statesman via AP Images)

In the first six months of 2022, the Proud Boys counterprotested or harassed people on at least 28 separate occasions at LGBTQ and reproductive justice events around the country – together acting as a coordinated attack on gender equity and bodily autonomy. Their activity rose significantly in June as they targeted Pride activities. In that month alone, members of the Proud Boys gathered to protest or harass attendees at 14 different LGBTQ and reproductive justice-oriented events.

The Proud Boys currently face intense scrutiny for their role in the Jan. 6, 2021, Capitol insurrection. More than 40 members face charges related to their alleged activities on Jan. 6, including charges of seditious conspiracy brought against their former chairman and several other leaders. But that legal pressure has not slowed the group’s activities. To the contrary, the past 18 months since the insurrection has been the most active period in the group’s history. Last year, their ranks swelled to 72 chapters, up from 43 in 2020.

While the Proud Boys once fashioned themselves largely as a street-fighting gang, hosting rallies across the country where they hoped to clash with antifascist counterprotesters, they diversified their activity after Jan. 6. The group largely eschewed hosting their own demonstrations in favor of involving themselves in local politics and civic events. Members have attended city council and school board meetings, participated in parades and joined rallies hosted by a variety of organizations. Their activities have focused on the issues most likely to drive right-wing outrage and, in turn, to help the group forge new coalitions. These issues include masking, vaccines, “critical race theory” and inclusive educational curricula and policies.

But over the past six months, the Proud Boys’ attention has shifted toward a tightly focused campaign of transphobia, homophobia and misogyny. These hateful sentiments have always helped fuel the far right, but they currently sit at the forefront of its organizational efforts. To understand why, one needs only to look to the GOP. A growing radical wing of the party has in recent months embraced militant opposition to LGBTQ people and reproductive rights – a position reflected most clearly in in their legislative assault on trans people and the overturning of Roe v. Wade. The Proud Boys’ harassment and violence now help reinforce a multi-fronted attack against those fighting for bodily autonomy, racial equity and democracy, and their current activities are a sign of how tightly interwoven extremist activists such as the Proud Boys have become with the GOP.

Targeting events around the country

On June 26, library patrons attending a drag queen story hour at a public library in Sparks, Nevada, encountered what has now become an increasingly regular sight: a group of men clad in the Proud Boys’ black-and-yellow uniform. They held signs that accused participants of “grooming” children and yelled at parents that they were “sick.” One of those Proud Boys allegedly approached the building with a gun, causing patrons – including a number of children – to flee inside to safety. “We had some people who were visibly shaken and sobbing,” a librarian told a local reporter.

The Sparks library protest was not the only time Proud Boys and other protesters carried weapons. At a demonstration outside a Pride-themed story time at a McKinney, Texas, library, one man reportedly “openly carried a pistol on his hip, while members of the Proud Boys wore tactical gear and carried bear mace.”

Only days after the McKinney incident, Proud Boys stormed a different drag queen story hour at a library in San Lorenzo, California. According to the event’s performer, Panda Dulce, eight to 10 Proud Boys charged into the library, including one wearing a shirt featuring an assault rifle and the phrase “Kill your local pedophile.” They hurled homophobic and transphobic insults, calling Dulce a “pedophile” and a “groomer.” The Alameda County Sheriff’s office has launched a hate-crime investigation of the incident.

In total, the Proud Boys targeted 11 LGBTQ-related events during the first six months of 2022, including nine during Pride month in June (which one Proud Boys chapter referred to as “groomer awareness month”). More than half of those events featured drag queens. While several were drag queen story hours, long-standing events in libraries across the country in which drag performers read to children, Proud Boys also targeted an adults-only drag brunch in Arlington, Texas, and a drag show at a bar in Woodland, California – suggesting the protesters were not, as one argued, solely focused on “protecting kids.”

The law enforcement response to the Proud Boys’ activities has, on multiple occasions, elicited criticism from library patrons and community members. During the Sparks incident, police had left the scene before a Proud Boy allegedly approached the library with a gun, leaving patrons and library staff to handle the incident on their own. At a Wilmington, North Carolina, library Pride story time, library patrons reportedly said police “fist bumped the protestors,” who had been yelling obscenities into the library reading room.

A number of these demonstrations took place in May, after the Supreme Court’s decision in Dobbs v. Jackson Women’s Health Organization – the case that would ultimately overturn the constitutional right to abortion – was leaked. In Memphis, roughly 15 Proud Boys joined anti-abortion protesters who were there to counter a larger group rallying in opposition to the Supreme Court’s decision. Two days later, Proud Boys counterprotested similar demonstrations in Indiana and Florida. Members of the group also turned out to counterprotest pro-abortion rights activists once Roe was overturned in June. In Atlanta, Proud Boys showed up to a protest downtown in their own branded vehicle.

The group has also celebrated and threatened violence against abortion clinics and providers. When a clinic burned down in Tennessee on Dec. 31, 2021, a Proud Boys chapter responded on social media with the message, “Bro this year is about to be LIT.” In response to California’s announcement that it would position itself as a sanctuary for those seeking abortions, Proud Boys in Nevada posted a meme that referenced making pipe bombs.

Far-right extremist groups, in general, are increasingly focused on anti-abortion and anti-LGBTQ activism. The same day the Proud Boys interrupted a story time in San Lorenzo, California, for example, police also arrested 31 members of the white nationalist group Patriot Front for conspiring to riot at a Pride event in Idaho. According to the Armed Conflict Location and Event Data Project, abortion-related events involving far-right groups such as militias and the Proud Boys have already increased by 90% compared to 2021. Their participation in anti-LGBTQ demonstrations is set to match or outpace last year, which was seven times higher than in 2020.

It is not a coincidence that the Proud Boys and other far-right groups are simultaneously ramping up their anti-LGBTQ and anti-abortion activism. These groups target LGBTQ people and defenders of reproductive justice because, collectively, their existence and advocacy upset the strict gender hierarchy the Proud Boys and the broader far right seek to impose.

Women, they claim, are best suited for having children and doing housework. One of the Proud Boys’ central tenets is to “venerate the housewife.” Allowing women and people who can become pregnant to have autonomy over their reproductive choices opens new economic and social opportunities, meaning they may choose to limit or not have children – and reproduction is a function men (and even women) in the far right believe they have a duty to perform. For extremists on the right, reproduction is central to their fight against “white genocide” or “the great replacement.” White birthrates, they argue, must remain high to maintain their demographic majority and political power.

Trans people do not align with traditional, patriarchal ideas and expectations about gender; as a result, the Proud Boys and likeminded activists frequently deploy anti-trans propaganda. The group claims that trans people are “mentally ill gays” and that they represent an especial threat to children – a dangerously bigoted belief exhibited most clearly in the group’s frequent attempts to paint trans people, and LGBTQ people more broadly, as “groomers.”

But the Proud Boys and others on the far right also frequently and increasingly attack trans people because they can easily be made into a scapegoat for society’s supposed decay or decline. Far-right movements rely heavily on the creation of internal enemies who, they claim, threaten the nation and, therefore, need to be suppressed or removed. As trans people have become more visible in our society, they have been increasingly demonized by the far right, who paint trans people as the forefront of a broader movement that threatens to upset the entire social fabric of the nation. Trans people are currently on the receiving end of the Proud Boys’ vilest attacks, but their hatred is not confined to members of that community: Anyone who does not fit their rigidly hierarchical worldview is deemed threatening and therefore worthy of demonization and even violence.

The far right relies on moral panic to engage and recruit new adherents. The panic over “groomers” and “pedophiles” is only the latest iteration, but it produces real and lasting harm – especially when a major political party lends it credence.

The hard right gains momentum and expands their targets

Attacking drag queen story hours and other LGBTQ events, as well as protesting access to reproductive care, are not new tactics used by the Proud Boys or other extremist groups. In 2019, for instance, the Proud Boys participated in a wave of protests against drag queen story hours around the country. But the political context in which the Proud Boys operate is dramatically different than it was even three years ago. Now, with the Republican Party galvanized around an anti-trans and anti-abortion agenda, the Proud Boys and other extremists operate as part of a broader, mainstream hard-right political movement.

In some cases, public opinion seems to be swinging in the same reactionary direction as the Republican Party. In recent polling conducted by the SPLC, 42% of people agreed, to some extent, that “transgender people are trying to indoctrinate children into their lifestyle,” including 63% of Republicans. When asked if they believed that “feminism has done more harm than good,” 37% of respondents, overall, agreed, including half of Republicans.

With the anti-trans, anti-abortion movement gaining key wins with the overturning of Roe v. Wade and innumerable bills limiting the expression and bodily autonomy of trans people, groups like the Proud Boys are looking to capitalize on the movement’s momentum. The broader political right, and even the Supreme Court, have signaled that the attacks on people’s rights will not stop. In his concurring opinion in the Dobbs ruling, Clarence Thomas indicated that the Supreme Court should reconsider rulings protecting same-sex marriage, access to birth control and same-sex relationships.