Republicans’ failure to deliver a “red wave” election saw many propagandists take refuge in denial and recriminations, and others to imagine a Republican Party led by Florida Gov. Ron DeSantis rather than Donald Trump.

The disarray among Trump loyalists raised questions about Trumpism’s hold over the Republican Party, as many of his hand-picked acolytes suffered upset defeats around the country. 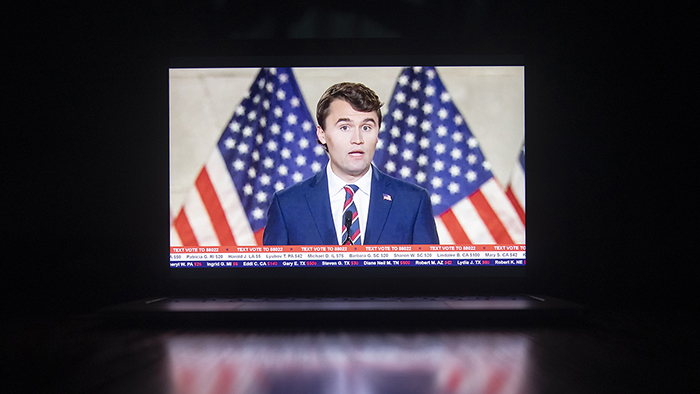 Charlie Kirk, founder and president of Turning Point USA, speaks during the Republican National Convention seen on a laptop computer in Tiskilwa, Illinois, on Monday, Aug. 24, 2020. (Photo by Daniel Acker/Bloomberg via Getty Images)

Over the course of a 10-hour livestream on Tuesday night, the host and guests on “The Charlie Kirk Show” modeled the hard right’s transition from hope to despair as election results took shape.

Kirk, the head of the far-right youth organization Turning Point USA (TPUSA), spoke to a string of guests including hard-right political operative and neo-Nazi collaborator Jack Posobiec, as well as TPUSA’s chief creative officer Benny Johnson, who was fired by Buzzfeed in 2014 after editors found more than 40 instances of plagiarism in his stories.

Early in the stream, buoyed by optimism, Johnson convinced Kirk to rap live on air “if we have the kind of night we’re expecting.” But the host’s demeanor soured as the night wore on.

By midnight, Kirk lamented: “People are texting me. They’re upset. They’re so depressed.” He said: “Listen, we’re up against the oligarchs. No one said this was going to be easy.”

Soon after, he glumly announced to his guests that hard-right favorite Rep. Lauren Boebert was trailing her Democratic challenger Adam Frisch in Colorado’s third district.

Mastriano, whose campaign was powered by Christian nationalist rhetoric, is a hard-right favorite whom Posobiec controversially stumped for during the campaign.

During the campaign, Rove’s American Crossroads PAC ran attack ads on Democratic Senator-elect John Fetterman that tried to portray him as a radical leftist by contrasting him unfavorably with the moderate Democratic gubernatorial nominee – and Mastriano’s opponent – Josh Shapiro. This prompted accusations from Mastriano’s campaign that the “Republican establishment” was working against his candidacy.

When it became clear that Mastriano had lost, Posobiec recycled the conspiracy theory.

Addressing Rove, Posobiec said: “This is on you. This is on the establishment.” He added: “Great job, Karl. Really proud of you.”

Infighting on the right

Other far-right figures followed Posobiec’s lead and attacked the Republican Party from the right.

Peinovich, who was recently allowed to return to Twitter under the policies of Elon Musk, frequently criticizes Republicans and conservatives for not embracing the hardcore antisemitism that underpins his own political ideology.

Laura Loomer, a self-described “#ProudIslamophobe” who handcuffed herself to a door handle at Twitter’s New York headquarters in 2018 after being banned from the platform for racist tweets, posted on Telegram late on election night that “Georgia, Arizona, and Pennsylvania are being stolen before our eyes.”

“I said months ago there would never be a red wave because of the GOP. They allowed the Dems to steal your elections again,” Loomer wrote just before 2 a.m. Wednesday.

Loomer tried, and failed, to oust Republican incumbent Rep. Daniel Webster in a race for U.S. House of Representatives in Florida’s 11th District in 2022. In response to Loomer’s loss in the Aug. 23 primary, several of her supporters filed a lawsuit against Webster, the Florida Election Canvassing Commission and a handful of others. Loomer, who is representing herself pro se, filed a motion on Nov. 4 to add herself as a plaintiff in the case.

Jan. 6 organizer Ali Alexander called for the resignation of Republican National Committee chair Ronna Romney McDaniel in a Telegram post, saying, “Her poor management and cycle-to-cycle gimmicks distract from the structural changes needed to capitalize on the ever-shrinking Democratic Party.”

Alexander signed the post “@AliAlexander Stop the Steal, founder.” However, as previously reported on Hatewatch, an LLC named Stop the Steal was first registered on Nov. 13, 2020, in Montgomery, Alabama, by a lawyer, George Coleman, and the name was first used by Roger Stone Jr. in 2016 for poll watchers he organized under the auspices of combating voter fraud in urban districts in Trump’s first election campaign.

Many on the far right were especially disappointed by Democrat John Fetterman’s victory in Pennsylvania and responded with ableist slurs. Fetterman, who suffered a stroke in the months leading up to the election, defeated celebrity TV doctor and Donald Trump’s hand-picked candidate, Mehmet Oz, to become U.S. senator for Pennsylvania on Tuesday.

White nationalist livestreamer Nick Fuentes, who has remained a Trump loyalist, posted a reaction to the Pennsylvania result on Telegram. With a screenshot of a tweet from a news outlet illustrating increased turnouts among Black, women and young voters in Pennsylvania, Fuentes added the caption, “Thank you young people, black people and women for electing a mentally r***rded stroke victim.”

Vincent James, a Fuentes collaborator and former propagandist for violent, white nationalist Rise Above Movement, also took to Telegram to post: “You want scientific proof of election fraud? Ok. A r****ded trans-human ogre, who’s probably going to rape someone on the senate floor, just became a senator in Pennsylvania.”

White nationalist blogger and podcaster John Christopher Zander, who works under the pseudonym “The Z Man,” wrote in a Wednesday morning post, “We are now required to pretend that a brain damaged hobo won the Pennsylvania Senate race.

In previous reporting, Hatewatch identified Zander as the person behind the Z Man pseudonym.

Doubling down on conspiracy theories

Some ride-or-die Trump supporters doubled down on the election denial they have been spewing since 2020.

Andrew Anglin, the editor of neo-Nazi website the Daily Stormer, directed his pessimism and frustration at democracy itself.

“Here’s the problem: elections are fake,” Anglin wrote in a Nov. 9 blog post. He added, “We are living in a hell and things are getting worse and they’re about to get worse even faster, and all this political stuff is a mass delusion.”

“I’m really just waiting for the entire urban population of the United States to die,” he wrote.

At pro-Trump junk news site Gateway Pundit, publisher Jim Hoft and other authors responded to Tuesday’s results with a series of posts outlining a sprawling, convoluted conspiracy theory about a stolen election.

Site headlines on Wednesday included “It Feels Like We Are Watching the First Wholly Manufactured Election in Our History in Which All Key Competitive Races Were Programmed By Langley” and “BLOOD MOON BLOODBATH … Democrats Steal Midterms, Communism Comes Home to America … Crime, Inflation, Record Gas Prices, War, Open Borders and Corruption WIN BIG.”

As the evening wore on, many hard-right pundits were forced to reverse their confident predictions of a Republican triumph.

Newsweek opinion editor Josh Hammer tweeted, “Bring on the wave” early in the afternoon of Election Day. Later that night he struck a glummer note, posting, “A little surprised, given these utterly astounding Florida margins, that the red wave many of us predicted isn’t (as of yet) transpiring nationally.”

Hatewatch recently reported on Hammer’s links to the hard right. Hammer has donated to far-right candidates including Blake Masters while serving as opinion editor for the magazine.

The poor showing from Trump-backed candidates has empowered far-right critics of the former president, who is expected to launch his 2024 presidential campaign on Nov. 15.

“The future of American political conservatism is Ron DeSantis, J.D. Vance, and National Conservative-style Republicans like them. Not MAGA,” wrote The American Conservative’s anti-LGBTQ obsessive Rod Dreher on Wednesday in a piece titled “The Red Wave That Wasn’t.”

Thursday on Breitbart News, white nationalist columnist Ann Coulter – a former pro-Trump stalwart turned critic – celebrated the evening as “a humiliating defeat for Trump.” Coulter’s column detailed how the candidates most associated with him had underperformed, while the strongest showings had come from “Gov. Ron DeSantis in Florida and Gov. Brian Kemp in Georgia — the two Republicans Donald Trump hates with the hot, hot hate of a thousand suns.”

These long-standing anti-Trump voices on the far right were joined by critics on influential conservative media platforms as the week wore on, with the Rupert Murdoch-owned New York Post caricaturing Trump as a whining Humpty Dumpty on its Thursday front page, after Wednesday’s post-election front page hailed Florida’s governor as “DeFuture.”

Also on Thursday, Post columnist John Podhoretz accused Trump of “sabotaging the midterms” in a column that dubbed him “Toxic Trump.”

The new enthusiasm for DeSantis on the far right – and the recriminations aimed at Trump – led some to speculate about a Republican “civil war” in the lead-up to the 2024 elections.

If that comes to pass, it will be a conflict between two politicians who have each prospered by appealing to anti-immigrant and anti-LGBTQ sentiment, pandering to conspiratorial views about the teaching of Critical Race Theory in schools and adopting the Christian right’s hardline anti-abortion agenda.