Kanye West ­– now known as Ye – unleashed a hateful rant last Thursday during a bizarre appearance on Alex Jones’ Infowars. Encompassing Holocaust denial, praise for Adolf Hitler and a request that people “stop dissing the Nazis,” the diatribe was the culmination of months of explicitly antisemitic rhetoric from the musician. 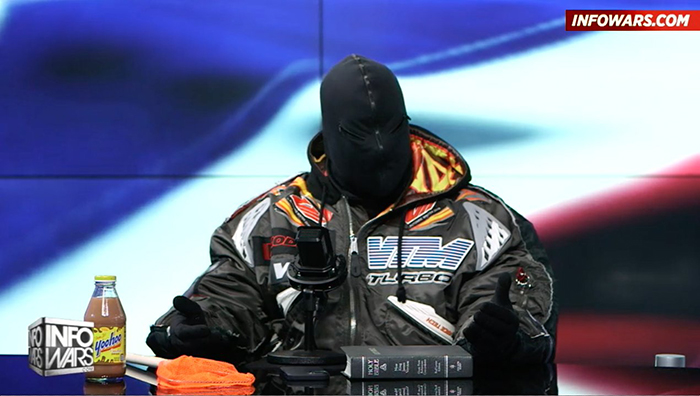 Kanye West appears in a mask Dec. 1 on Infowars.com

But Ye’s hard turn to public antisemitism has been amplified as a result of the cooperation, mendacity and/or negligence of organizations and individuals who have enabled him to spread it.

Those enablers such platforms as Twitter and YouTube; conservative media outlets including Fox News; and such influential right-wingers as Jones, Tim Pool, Tucker Carlson, Elon Musk and Donald Trump.

Ye’s drift into right-wing politics began as early as 2018. That year, he publicly praised Trump and right-wing media performer Candace Owens, laid blame on Black people for their centuries of enslavement when he remarked that it “sounds like a choice,” repeatedly wore a red Trump “MAGA” cap in public, and was invited by the then-president to the Oval Office.

The context surrounding Ye’s embrace of the right includes a series of personal crises including mental health difficulties – widely reported since his hospitalization in 2016 – and the end of his marriage to Kim Kardashian in 2021.

In 2020, Ye launched a quixotic presidential campaign in which he appeared to abandon Trumpism in favor of advancing principles associated with Christian democracy. Although his was not explicitly a far-right platform, among Ye’s commitments was opposition to abortion rights. He was reportedly assisted in securing 0.04% of the national vote by a “network of Republican Party operatives.”

By late 2022, however, he had embraced an unabashed politics of antisemitism and extremism.

At his fashion show in Paris on Oct. 3, Ye appeared alongside Owens, the right-wing media figure, with both sporting T-shirts emblazoned with “WHITE LIVES MATTER.”

“White Lives Matter” is a slogan popular among some white supremacists, who popularized it from 2015 as a racist reaction to the Black Lives Matter movement.

Soon after the Paris appearance, on Instagram, Ye posted, “Everyone know that Black Lives Matter was a scam now it’s over you’re welcome.”

In the wake of this stunt, Ye was celebrated by conservatives, including congressional Republicans and right-wing media personalities.

Also on Oct. 6, West recorded an interview with the first of his important enablers, Tucker Carlson. The Fox News host introduced the interview with an angry denunciation of Ye’s critics, reducing their criticisms to questions of mental health.

“The enemies of his ideas dismissed West, as they have for years, as mentally ill,” Carlson said in his monologue, claiming that such accusations were “often used as ammunition against him in the battle for influence over the minds of America’s young people. And that battle is intense.”

(This defense mirrored an August 2020 segment in which Carlson praised Kanye’s presidential campaign stance against abortion, saying that “no one with a national platform has been more honest or sincere or effective than Kanye West” on “core conservative issues,” and that “the left” could only respond with “ad hominem” attacks.)

In October, Carlson asked viewers: “Is West crazy? You can judge for yourself as you watch what we’re about to show you.”

But parts of the interview recording that were edited out and later leaked to reporters showed how selective Carlson’s presentation had been.

The footage that viewers were not allowed to see showed Ye making bizarre claims, including that “professional actors” masquerading as fake children were being “placed in my house to sexualize my kids.”

It also showed him making remarks that were charged with antisemitism. At one point he said that Planned Parenthood founder Margaret Sanger was a “known eugenics [sic]” who collaborated with the Ku Klux Klan “to control the Jew population.” He then expanded on the remark, saying, “When I say Jew, I mean the 12 lost tribes of Judah, the blood of Christ, who the people known as the race Black really are.”

Sanger was in fact an adherent of the eugenics movement, a position that has been condemned by the organization she founded, along with a 1926 speech she made to a women’s auxiliary branch of the Ku Klux Klan. There is no evidence of any broader collaboration between Sanger and the Klan.

But the claim made about Black people being “the 12 lost tribes of Judah” broadly resembles the belief of Black Hebrew Israelites that African Americans are descendants of biblical Israelites. A smaller cohort of Radical Hebrew Israelites have made these beliefs into the basis of antisemitic abuse and attacks on Jews, whom they see as having usurped their identity.

Ye’s other asides in discarded portions of the interview – including claims that Jewish people don’t “have the ability to make anything on their own” and that they have a capacity for “financial engineering” – made it clear that the version of these beliefs he espoused was intertwined with antisemitism.

Carlson tried to bury this material in order to hype Kanye as a right-wing thought leader, but Ye’s own words and deeds undermined that misdirection in the following days.

As October wore on, Ye appeared to lose any interest in concealing his antisemitic beliefs, and a few platforms and media outlets refused to play host to his ideas.

On Oct. 7, Ye’s Instagram account was locked after he invoked antisemitic conspiracy theories on the platform, appearing to claim that fellow musician Sean “Diddy” Combs was controlled by Jews. The following day, returning to Twitter after nearly a two-year absence, Ye posted a tweet saying that he was “going death con 3 [sic]” on Jewish people, and his Twitter account was also temporarily locked.

As Ye’s public expressions of antisemitism became more vociferous, some of those who recorded interviews with him at this time chose not to amplify his hate speech, albeit sometimes belatedly.

On Oct. 11, producers of “The Shop,” a podcast featuring LeBron James, announced that they would not release an episode featuring Ye because he had used the opportunity to “reiterate more hate speech and extremely dangerous stereotypes.”

On Oct. 16, he appeared on an episode of the “Drink Champs” podcast. Ye spoke of his “antisemite vibe,” castigated the “Jewish media” and repeated claims Candace Owens made in a documentary that attributed George Floyd’s murder to a fentanyl overdose. The episode was released but was removed from the internet after only a day.

The belated withdrawal of the episode did not prevent the neo-Nazi Goyim Defense League from capitalizing on Ye’s remarks. On Oct. 22, they hung a banner at a protest they organized in Los Angeles that read, “Kanye is right about the Jews.”

Media reports in late October indicated that Ye had a long history of expressing admiration for Adolf Hitler to his employees and his inner circle, and that he had wanted to name his 2018 album Hitler. (The release was eventually titled Ye.)

However, Ye’s public comments, the leveraging of his remarks by neo-Nazis, and the revelations of long-term Nazi sympathies did not stop social media companies and right-wing influencers from allowing him to continue to spread antisemitic hate. In fact, Ye managed to leverage his views for even more attention in the following month.

Kanye platformed and embraced by the far right

In November, a sequence of high-profile meetings and events allowed Ye to directly spread his message of hate to a worldwide audience with the assistance of big tech and right-wing influencers.

On Nov. 22, Ye dined at Mar-a-Lago with Donald Trump and brought along Nick Fuentes and “alt-right” washout Milo Yiannopoulos. The dinner, which came as some Republicans were blaming Trump and the extremist positions of his favored candidates for their lackluster midterms, brought renewed criticism for the former president.

While Trump floundered in his attempts to explain why he had agreed to dine with the men, Ye, Fuentes and Yiannopoulos milked the occasion for attention.

Despite Ye’s very public antisemitic agitation, Fuentes’ record as a white nationalist propagandist and Yiannopoulos’ own history as a far-right provocateur, all three were invited a week after the Trump dinner to appear on the 1.33 million-subscriber YouTube channel of beanie-clad right-wing social media performer Tim Pool.

Ye walked out of the interview within minutes, after Pool appeared hesitant to openly endorse an antisemitic conspiracy theory Ye was detailing live on air. Pool nevertheless spun the truncated interview out into a series of videos that have collectively well over half a million views, according to YouTube’s statistics.

During the broadcast, Pool was able to collect Super Chat payments from viewers of the interview, thus profiting from the spectacle of Ye’s antisemitic meltdown. According to an analysis by the Institute for Strategic Dialogue (ISD), the stream attracted some $7,258 from 583 paid Super Chat payments, with Pool netting $5,081 and YouTube taking a cut of $2,177 for platforming Ye’s antisemitism.

ISD’s analysis found that 54 of those comments – collectively yielding $456.49 for the hosts – promoted antisemitism.

O’Connor wrote that “Ye’s efforts are encouraging the mainstreaming of antisemitism,” and added that “it is imperative that technology companies take a firm stance to limit the reach of these beliefs,” especially when “such beliefs encourage other online users to post content that are clear violations of the platform’s own community guidelines.”

YouTube has allowed Pool’s videos to remain on the site, despite the explicit antisemitism broadcast in the interview, and despite their ban on Fuentes in January 2020 over hate speech on his channel.

Hatewatch previously reported that YouTube has made tens of thousands of dollars over time from its share of Pool’s Super Chat payments.

After the already-infamous Infowars interview, Ye continued to push antisemitic messages on his Twitter account. Some of the tweets from the account appear to have been influenced by Fuentes, with one Dec. 1 tweet including the “Christ is King” slogan that Fuentes uses in his propaganda, and a link to his cozy.tv site.

After allowing Ye and his associates to post hateful propaganda throughout his appearances on Pool’s and Jones’ shows, Elon Musk personally, belatedly and seemingly arbitrarily suspended Ye’s account late Thursday night. Musk said the ban was the result of Ye tweeting out an image of a swastika inside a Jewish Star of David, but he did not explain how the symbol was worse than using Twitter to promote antisemitic screeds and white nationalist stream channels.

Like YouTube, Fox News and Infowars, Musk allowed Ye and his far-right associates to enjoy access to his platform – and an audience of millions – for his antisemitic hate and conspiracy theories.

If you or someone close to you is affected by mental illness, you can seek assistance by contacting the Substance Abuse and Mental Health Services Administration's hotline at 1-800-662-HELP (4357) or visiting their website.