The American radical right grew explosively in 2011, a third consecutive year of extraordinary growth that has swelled the ranks of extremist groups to record levels, according to a report issued today by the Southern Poverty Law Center (SPLC). The rise was led by a stunning expansion of the antigovernment “Patriot” movement.

“The dramatic expansion of the radical right is the result of our country's changing racial demographics, the increased pace of globalization, and our economic woes,” said Mark Potok, senior fellow at the SPLC and editor of the new report.

“For many extremists, President Obama is the new symbol of all that's wrong with the country - the Kenyan president, the secret Muslim who is causing our country's decline,” Potok said. “The election season's overheated political rhetoric is adding fuel to the fire. The more polarized the political scene, the more people at the extremes.”

Many Americans are enraged by what they see as America's decline, and opportunistic politicians have done their best to stoke those fears and demonize President Obama in the process. For some, the prospect of four more years under the country's first black president also is an infuriating reminder that non-Hispanic whites will lose their majority in this country by 2050. 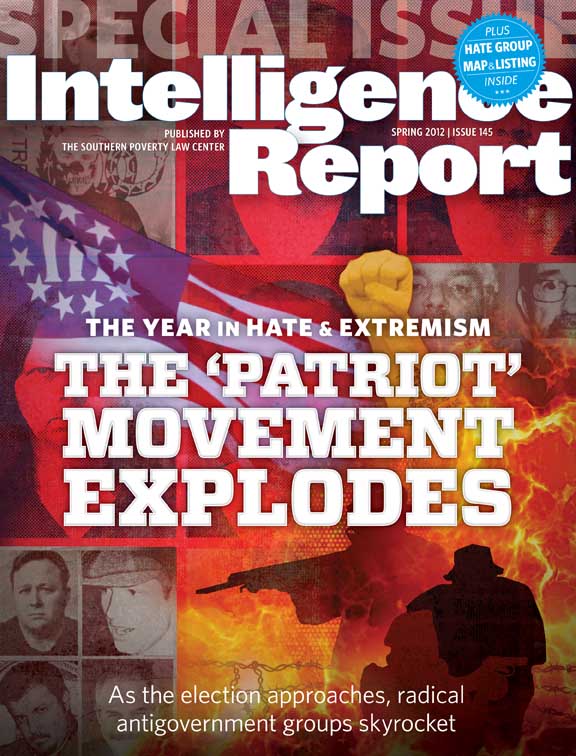 The SPLC report details the growth of hate groups to a record 1,018 in 2011, up from 1,002 the year before and the latest in a series of increases going back more than a decade. But the dramatic growth came in the Patriot movement, which is composed of armed militias and other conspiracy-minded organizations that see the federal government as their primary enemy. These groups saw their numbers skyrocket for the third straight year in 2011, this time by 55 percent - from 824 in 2010 to 1,274 groups last year. In 2008, just before the Patriot movement took off, there were 149 Patriot groups, a number that metastasized to 512 in 2009.

In all, Patriot groups have increased by 755 percent during the first three years of the Obama administration. Their number has now surpassed - by more than 400 groups - the previous all-time high set in 1996, when the first wave of the militia movement peaked shortly after the Oklahoma City bombing that left 168 people dead.

The report is contained in the Spring 2012 issue of the SPLC's quarterly investigative journal Intelligence Report. Readers will also find an interactive map showing where hate groups are located and comprehensive, state-by-state lists.

With the recent growth of the radical right has come what most experts agree is a rash of domestic terrorism, much of it aimed at President Obama and other authorities. In the last year, several examples have cropped up. In Michigan, members of the Hutaree Militia are currently on trial for planning to murder a police officer and then attack the funeral with homemade bombs in an effort to spark a war against the government. In Georgia, four militia members are facing charges of conspiring to bomb federal buildings and attack cities with the deadly ricin toxin. And four members of the Alaska Peacemakers Militia are accused of planning to murder judges and law enforcement officials as part of a plan to overthrow the federal government.

The continuing tough economy appears to offer the best single explanation for the expansion of a major subset of the larger Patriot movement - antigovernment “sovereign citizens.” Sovereign citizens generally believe they are not obliged to follow most laws or comply with requirements for driver's licenses and vehicle registrations. They also typically believe that they don't have to pay taxes, that they can stop foreclosures with ease, and that with the right procedure they can extract millions from the government - all of which makes the movement especially attractive at a time of general economic hardship.

The FBI considers the sovereign movement dangerous enough that it issued a special bulletin to law enforcement officials last September describing it as “domestic terrorist,” and reported that six officers have been murdered by sovereigns since 2000. Most recently, a father-son team of sovereigns shot to death two West Memphis, Ark., police officers during a routine traffic stop in 2010, a killing that drew international attention to the movement.