Dorothy Guilford has a simple message for politicians who enact laws making it harder for minorities, the poor and the elderly to vote: “I don’t think that’s right.” She should know. She’s seen it all before.

Born in 1920 in Montgomery, Alabama, Guilford lived through most of the Jim Crow years, when laws discouraged African Americans like her, as well as poor white people, from voting.

When she first became eligible to vote, she had to take a literacy test and pay a poll tax of $1.50, a sum worth about $25 today. Anyone who couldn’t read or couldn’t pay the tax, which accumulated, couldn’t vote. Most white voters, however – those whose ancestors were on the voting rolls prior to the Civil War – were exempt from the test.

Guilford vividly recalls the struggle for voting rights that made her city the cradle of the civil rights movement.

She walked to work every day for more than a year to support the Montgomery bus boycott. She heard the bomb explode on the front porch of Dr. Martin Luther King Jr.’s parsonage during the boycott and listened to King’s steady voice as he calmed an angry crowd gathering in the street.

Several years later, she watched the Freedom Riders arrive in her city, only to be viciously beaten by Klansmen while police looked the other way.

So, no, Guilford doesn’t approve of the many recently enacted state laws that could disenfranchise hundreds of thousands of otherwise eligible voters in her home state and elsewhere. The upcoming general election will be the first under Alabama’s new photo ID law, which requires voters to produce one of 10 specific types of identification.

“It’s important,” Guilford says emphatically, “for everybody to be able to vote and let their choice be known.”

It’s in that spirit that the Southern Poverty Law Center is producing a new classroom documentary – tentatively titled One Person, One Vote. The Teaching Tolerance film will recount the hard-fought struggle and the sacrifices that led to the Voting Rights Act of 1965. It will focus, particularly, on the pivotal events of 1965, including the Selma-to-Montgomery March that moved the nation.

The SPLC is planning to distribute 50,000 copies of the film to schools across America, free of charge, in time for the 50th anniversary of the march’s conclusion on March 25, 1965.

Discrimination by another name
The purpose of literacy tests and poll taxes was, of course, to suppress the vote of African Americans. The Jim Crow laws were part of the framework of statutes that Southern states began enacting in the 1890s to legalize racial discrimination and enforce white supremacy following Reconstruction.

At the height of the civil rights movement, Congress banned the Jim Crow laws with the Civil Rights Act of 1964 and, in the case of literacy tests, the Voting Rights Act the following year. But poll taxes for state elections in several states, including Alabama, survived until they were finally eliminated by court orders in 1966.

The U.S. Supreme Court’s 2013 decision that gutted the Voting Rights Act means that certain states, mostly in the South, no longer need clearance from the Justice Department before changing their election laws.

And this year, the Court allowed Texas’ new voter ID law, one of the strictest in the nation, to be implemented in the general election. In that state,one of the first voters to be disenfranchised was a 93-year-old veteran who was turned away from early voting in Houston because he had allowed his driver’s license to expire, even though he had numerous other forms of identification.

Texas is not alone. Since the 2010 elections, 22 states have enacted new voter restrictions,according to the Brennan Center for Justice. In 18 of the states, the laws were passed entirely through legislative bodies controlled by the Republican Party. 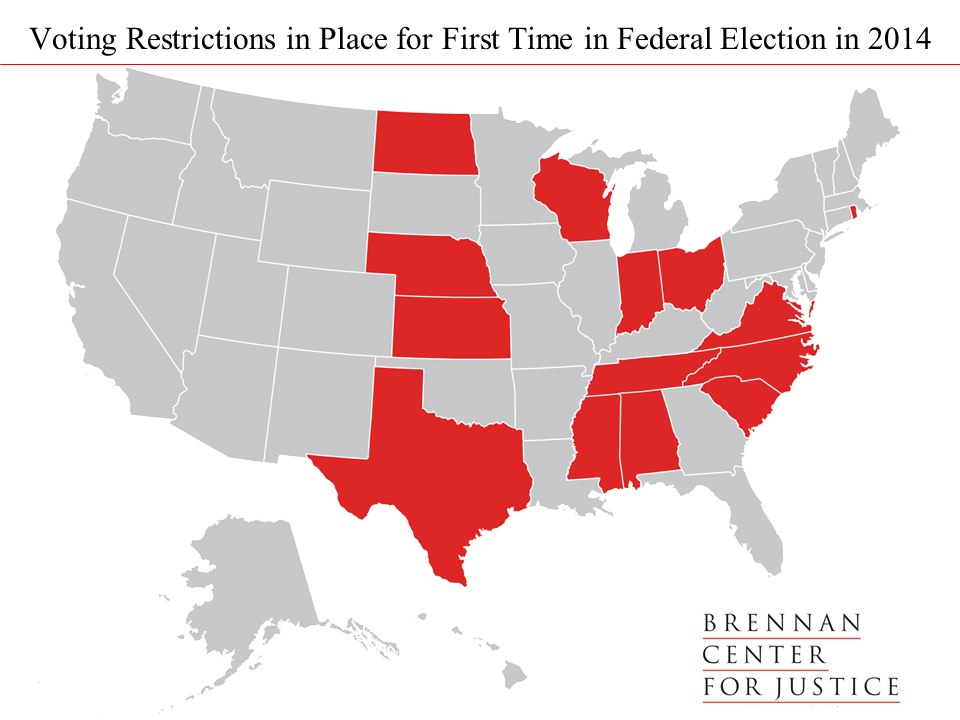 These laws include strict voter ID requirements, early voting cutbacks and restrictions on voter registration. Numerous studies have shown the laws will disproportionately affect minorities, low-income people and the elderly.

The reality is, there is no evidence of widespread fraud at the polls, a fact noted by Justice Ruth Bader Ginsburg in her dissent to the Texas ruling. She wrote that between 2002 and 2011, there were only two successful prosecutions of in-person voter fraud in Texas.

The “potential magnitude of racially discriminatory voter disenfranchisement” should have “counseled hesitation” before the Court overturned a lower court’s ruling against the Texas law, Ginsburg wrote. That lower court found that the very purpose of the law was to suppress the vote of minorities. Ginsburg added that as many as 600,000 Texans, disproportionately African American and Hispanic, could be prevented from voting.

Other judges also have concluded that such laws are aimed at suppressing the votes of minorities, as have a number of scholarly studies.

In dissenting against a ruling in favor of Wisconsin’s voter ID law, U.S. Circuit Judge Richard Posner, a Reagan appointee, wrote that “[s]ome of the ‘evidence’ of voter-impersonation fraud is downright goofy, if not paranoid.” He further wrote that such allegations were “a mere fig leaf for efforts to disenfranchise voters likely to vote for the political party that does not control the state government.”

In Wisconsin, Posner said that 300,000 people lack the kind of ID required by the law.

The fact is, voter ID laws can impose significant costs and burdens on many voters.

A study released in June by the Charles Hamilton Houston Institute for Race and Justice at Harvard found that the expenses for documentation, travel and waiting time associated with obtaining a proper photo ID can range from $75 to $175. That’s significantly higher than the old poll tax, even when adjusted for inflation.

“For many people, paying the cost needed to meet voter ID requirements means spending the equivalent of more than a week’s worth of groceries,” the Harvard report states. Some people, it adds, “can never get the documents they need to qualify for a voter ID.”

She counted herself among those fortunate enough to be able to vote in Alabama during Jim Crow. Her father was a carpenter who made a good living. And she worked in a dentist’s office for 30 years and was able to keep up with her poll taxes.

And many were discouraged by the long lines, something reported regularly today in many voting precincts. 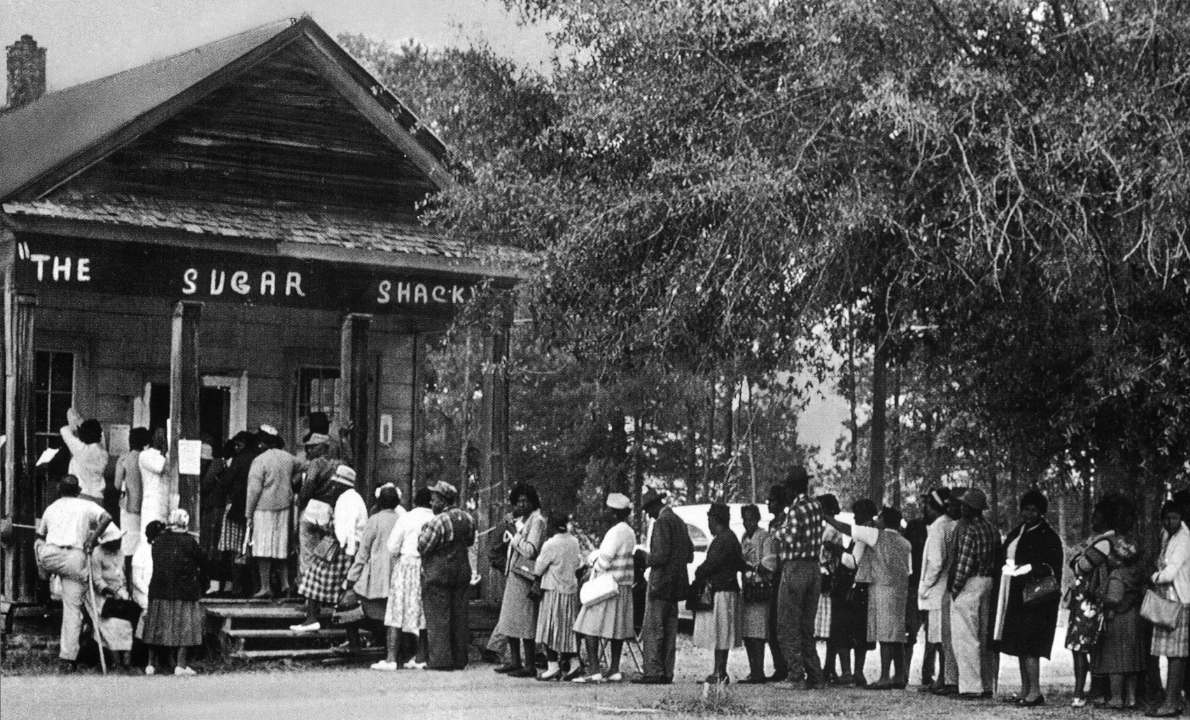 Voting in rural Alabama in 1966

“It was long lines to pay your poll tax,” Guilford said. “It was a long line to vote. Now that, I think, discouraged a lot of people, the long lines, because so many had to go back to work.”

The same is true today.

But whatever the hurdle, Guilford thinks everyone should try their best to vote. And she backs up her beliefs with her ballot.

“I’ve voted since I was [old enough], and it’s very important to me. Now that I’m not able to go to the polls, I vote absentee. I’m going to do that as long as I live.”