Continuing on the same trajectory as years past, the number of active Ku Klux Klan hate groups again declined in 2021. Similar to 2020, this decline can be attributed to both the COVID-19 pandemic, as well as continuous infighting that has long been a hallmark of the Klan.

2021 was marked by more attempts at alliances between Klan groups, accusations of disloyalty to the Klan on social media and aggrandizing membership, event attendance and influence. Despite such self-promotion, Klan groups had very few events of note in 2021 and few new members were attracted to the ranks.

2021 began with the doxing of several members of the Dekalb, Texas-based Church of the Ku Klux Klan and the Gladewater, Texas, chapter of the Patriotic Brigade Knights of the Ku Klux Klan. A hacked list of individuals who requested an application for the Patriotic Brigade Knights shows the insularity of Klan groups. Many potential applicants were already members of other groups or had been associated with recently disbanded Klans.

Held on private land in Tennessee, the largest Klan rally of 2021 occurred in May. Members of the American Christian Dixie Knights, the White Christian Brotherhood and the Alabama Knights gathered to light a cross and initiate a few new members.

More noteworthy, however, with regards to Klan activity in 2021 have been community responses to anticipated Klan events. In April, several hundred residents of Auburn, Indiana, gathered downtown to protest an alleged Church of the Ku Klux Klan event planned for an undisclosed location. Organized by the Indiana Mutual Aid Coalition, the rally re-centered attention on messages of unity and equality while collecting food donations for neighbors in need.

Klan flyering efforts dropped quite a bit from just over 40 incidents in 2020 to under 30 in 2021. The majority of these flyers were distributed at night from personal vehicles. The North Carolina-based Loyal White Knights of the Ku Klux Klan again carried out the most flyering in 2021, with the vast majority of those incidents occurring in Virginia. The Church of the Ku Klux Klan also distributed flyers in Oklahoma several times in early 2021.

KKK activity will likely remain stagnant or continue to decline in 2022. Groups continue to develop websites and attempt to utilize social media platforms, but with little success. The KKK’s imagery and rituals, unpopular within the contemporary white power movement, coupled with its group leaders’ inability to resolve conflicts, hamper hopes for a revival. 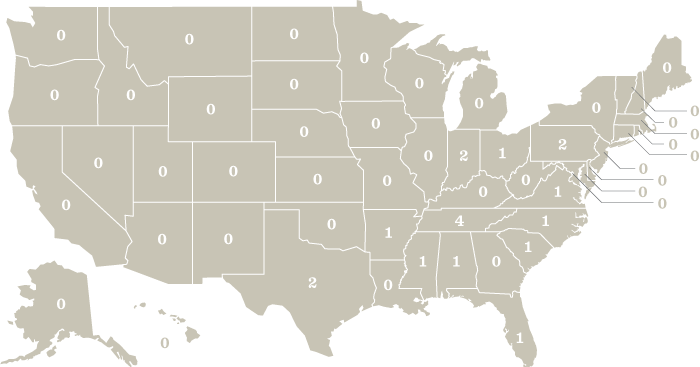 In 1865, at the conclusion of the Civil War, six Confederate veterans gathered in Pulaski, Tennessee, to create the Ku Klux Klan, a vigilante group mobilizing a campaign of violence and terror against the progress of Reconstruction. As the group gained members from all strata of Southern white society, they used violent intimidation to prevent Black Americans – and any white people who supported Reconstruction – from voting and holding political office.

In an effort to maintain white hegemonic control of government, the Klan, joined by other white Southerners, engaged in a violent campaign of deadly voter intimidation during the 1868 presidential election. From Arkansas to Georgia, thousands of Black people were killed. Similar campaigns of lynchings, tar-and-featherings, rapes and other violent attacks on those challenging white supremacy became a hallmark of the Klan.

The first leader, or “grand wizard” of the Ku Klux Klan, was Nathan Bedford Forrest, a well-known Confederate general. Within the structure of the Klan, he directed a hierarchy of members with outlandish titles, such as imperial wizard and exalted cyclops. Hooded costumes, violent “night rides” and the notion that the group made up an “invisible empire” conferred a mystique that only added to the Klan’s popularity.

After a short but violent period, the “first era” Klan disbanded when it became evident that Jim Crow laws would secure white supremacy across the country. However, the legacy of the original Klan, and the figureheads of the Confederacy before it, have been enshrined across the country in the “Cult of the Lost Cause.” Only in recent years – after gaining significant attention through large counterprotests and after deadly attacks from far-right extremists – have these statues started being removed and public spaces renamed. On July 9, 2020, Tennessee’s State Capitol Commission voted to remove the bust of Nathan Bedford Forrest from the state Capitol building. It was subsequently removed on July 23, 2021, and placed in the Tennessee State Museum.

In 1915, the Ku Klux Klan was revived by white Protestants near Atlanta, Georgia. In addition to the group’s anti-Black ideological core, this second iteration of the Klan also opposed Catholic and Jewish immigrants. A growing fear of communism and immigration broadened the Klan’s base throughout the South and into the Midwest, with a particular stronghold in Indiana. By 1925, when its followers staged a march in Washington, D.C., the Klan had as many as 4 million members and, in some states, considerable political power. A series of sex scandals, internal battles over power and newspaper exposés quickly reduced the group’s influence.

The Klan arose a third time during the 1960s to oppose the civil rights movement and attempt to preserve segregation as the Warren Court substantiated civil rights in multiple Supreme Court rulings. Bombings, murders and other attacks by the Klan took a great many lives. Murders committed by Klansmen during the civil rights era include four young girls killed in 1963 while preparing for Sunday services at the 16th Street Baptist Church in Birmingham, Alabama, and the 1964 murder of civil rights workers Andrew Goodman, James Chaney and Michael Schwerner in Mississippi.

Throughout the second and third eras of the Klan, many Black Americans left Southern states in the Great Migration. While those who moved North were seeking economic prosperity and social opportunities, they were also hoping to escape the racial terror centered around the Klan’s ideological stronghold in the South. With over 6 million Black Americans taking part in this migration, the demographics of the country shifted dramatically.

With the conclusion of the Vietnam War in 1975 and the subsequent return of American soldiers, several key figures arose within the Klan. Louis Beam, upon his return from Vietnam, joined the Alabama-based United Klans of America. His teachings on “leaderless resistance” and early adaptation to technological advances help bridge neo-Nazi and Klan groups into the organized white power movement. Similarly, David Duke – founder of the Knights of the Ku Klux Klan in 1975 – maintained a distinctly antisemitic hatred that closed ideological gaps with neo-Nazis.

Through a series of court cases aimed at bankrupting the Klan and closing the group’s paramilitary training camps, the organization has been greatly weakened. Internal fighting and government infiltrations have led to a seemingly endless series of splits, resulting in smaller, less organized Klan chapters. Given the Klan’s insistence on remaining an “invisible empire,” it is nearly impossible to estimate how many active members there are today. However, it is fair to assume that the infighting, rigid traditions and uncouth aesthetic of the Klan are not attracting significant new membership.

Church of the National Knights of the Ku Klux Klan
Valparaiso, IN*

Honorable Sacred Knights of the Ku Klux Klan
Madison, IN*

AKIA: A password meaning "A Klansman I Am", often seen on decals and bumper stickers.

Alien: A person who does not belong to the Klan.

Genii: The collective name for the national officers. Also known as the Kloncilium, or the advisory board to the Imperial Wizard.

Hydras: The Real officers, with the exception of the Grand Dragon.

Imperial Wizard: The overall, or national, head of a Klan, which it sometimes compares to the president of the United States.

Inner Circle: Small group of four or five members who plan and carry out "action." Its members and activities are not disclosed to the general membership.

Invisible Empire: A Ku Klux Klan's overall geographical jurisdiction, which it compares to the United States although none exist in every state.

Kalendar: Klan calendar, which dates events from both the origin and its 1915 rebirth Anno Klan, and means "in the year of the Klan," and is usually written "AK."

Klankfraft: The practices and beliefs of the Klan.

Klanton: The jurisdiction of a Klavern.

Kleagle: An organizer whose main function is to recruit new members. In some Klans, he gets a percentage of the initiation fees.

SAN BOG: A password meaning "Strangers Are Near, Be On Guard."