Last week, Daniela Vargas spoke at a press conference in Jackson, Mississippi, about her hope that she and other Dreamers could remain in the United States and contribute to the country they’ve long called home. 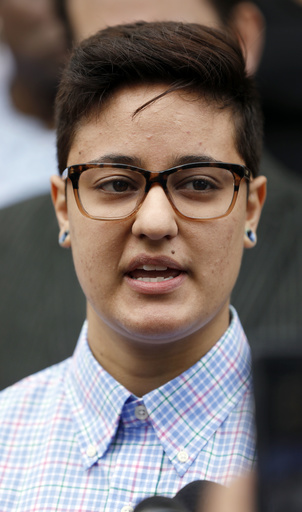 Minutes later, the 22-year-old woman – who earlier obtained permission to stay in the country through the Deferred Action for Childhood Arrivals (DACA) program – was detained by immigration agents and taken to a detention center in Louisiana.

The SPLC and other civil rights groups and private lawyers last night filed a habeas petition on her behalf in the U.S. District Court for the Western District of Louisiana, Alexandria Division. It seeks to force her release and to stop her deportation.

“Detaining Dany just minutes after she spoke publicly about immigrants’ rights appears to be nothing short of ICE retaliating against somebody who dared assert their First Amendment rights,” said Naomi Tsu, deputy legal director for the SPLC. “Dany, an aspiring math teacher and active community member, is not a threat to her community. Her detention only serves to chill free speech and stoke fear throughout immigrant communities.”

Vargas, 22, grew up mostly in Mississippi, where she was brought from Argentina in 2001. She benefited from DACA from 2012 through 2016, but her work authorization expired last November while she saved for the $495 government filing fee. Her application, submitted around Feb. 10, is pending.

The groups contend in the court documents that the government violated Vargas’ due process and First Amendment rights. The petition seeks her immediate release and the opportunity to challenge the decision to deport her.

The DHS contends, but has presented no evidence, that Vargas waived her rights to contest deportation when she entered the country under the Visa Waiver Program at age 7. She is being detained in LaSalle Detention Facility in Jena, Louisiana.

The SPLC also today launched a new project – the Southeast Immigrant Freedom Initiative – that will enlist and train lawyers to provide free legal representation to immigrants who have been detained in the Southeast and are facing deportation proceedings.

The project comes as President Trump’s executive actions create chaos and panic within immigrant communities. Vargas’ situation shows that even DACA recipients are at risk of being detained and deported to countries they don’t recognize as home.

Along with the SPLC, Vargas is being represented by the National Immigration Law Center (NILC), the law firm of Elmore & Peterson, and the Law Office of William Most.

“President Trump has tried to use his shock-and-awe approach to scare immigrants back into the margins of society,” said Justin Cox, staff attorney at NILC. “Courageous Dreamers like Dany should give us all hope that Trump’s approach will not be successful. Dany spoke out to defend her family and those like her, and we will use every legal tool at our disposal to ensure that her rights are not violated.”