Thirty years ago this month, a group of racist skinheads savagely beat an Ethiopian college student to death on a street in Portland, Oregon – an attack that sparked an SPLC lawsuit that decimated the neo-Nazi group responsible for the murder.

The somber anniversary of Mulugeta Seraw’s death was commemorated in Congress and in Oregon, serving as a reminder that communities must stand strong against hate, particularly as hate groups have become emboldened by a president who has exploited racist fear. 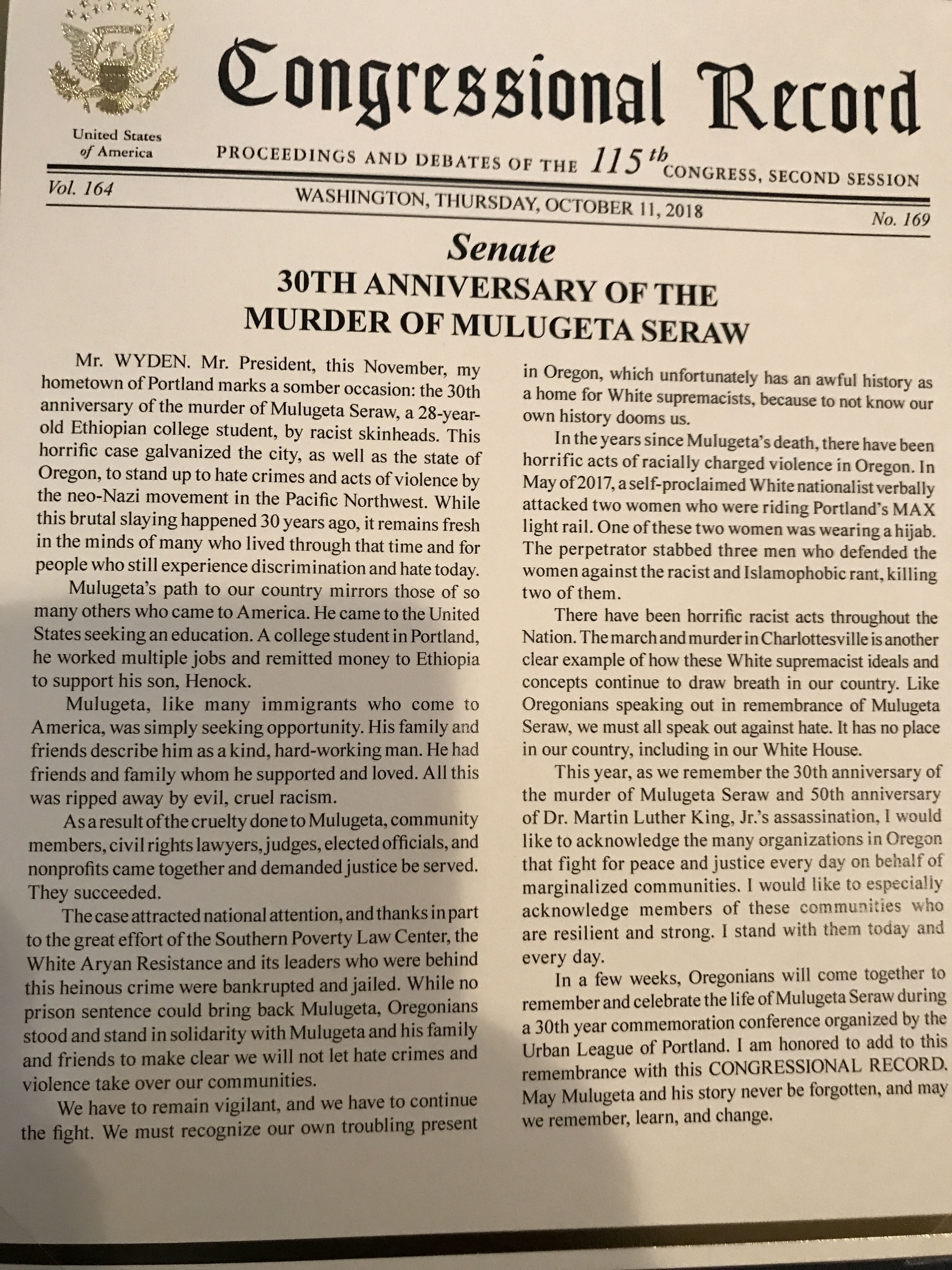 A photo of the Congressional proclamation.

“This horrific case galvanized the city, as well as the State of Oregon, to stand up to hate crimes and acts of violence by the neo-Nazi movement in the Pacific Northwest,” U.S. Sen. Ron Wyden of Oregon noted in a proclamation entered into the Congressional Record last month. “While this brutal slaying happened 30 years ago, it remains fresh in the minds of many who lived through that time and for people who still experience discrimination and hate today.”

In the wake of the Nov. 13, 1988, murder, the SPLC filed a lawsuit on behalf of Seraw’s family, suing the skinheads who killed Seraw and also Tom Metzger, a notorious California neo-Nazi who recruited them into his organization, the White Aryan Resistance (WAR). Portland lawyer Elden Rosenthal (now an SPLC board member) served as co-counsel, working alongside SPLC founder Morris Dees.

The lawsuit led to a $12.5 million jury verdict that decimated WAR.

“The case attracted national attention, and thanks in part to the great effort of the Southern Poverty Law Center, the White Aryan Resistance and its leaders who were behind this heinous crime were bankrupted and jailed,” the congressional proclamation states. “While no prison sentence could bring back Mulugeta, Oregonians stood and stand in solidarity with Mulugeta and his family and friends to make clear we will not let hate crimes and violence take over communities.”

In Oregon, the anniversary of Seraw’s death was commemorated by tributes and memorials. The street corner where he died has been marked by signs bearing his name. But more work remains for Oregon – and the nation – to confront hate, according to the proclamation.

“In the years since Mulugeta’s death, there have been horrific acts of racially charged violence in Oregon,” the proclamation states. “In May of 2017, a self-proclaimed White nationalist verbally attacked two women who were riding Portland’s MAX light rail. One of these two women was wearing a hijab. The perpetrator stabbed three men who defended the women against the racist and Islamophobic rant, killing two of them.

“There have been horrific racist acts throughout the Nation. The march and murder in Charlottesville is another clear example of how these White supremacist ideals and concepts continue to draw breath in our country.”

The SPLC identified 954 hate groups in 2017, representing a 20 percent increase over the three-year period coinciding with President Trump’s campaign and presidency.

Hate crimes also jumped 17 percent in 2017 – the third straight year to see an increase, according to an FBI report released this week. Antisemitic hate crimes saw a 37 percent increase during that same time. That report does not include the massacre of 11 Jewish worshippers at the Tree of Life Synagogue in Pittsburgh on Oct. 27.

“Like Oregonians speaking out in remembrance of Mulugeta Seraw, we must all speak out against hate,” the proclamation states. “It has no place in our country, including in our White House. … May Mulugeta and his story never be forgotten, and may we remember, learn, and change.”