Chris “Champ” Napier started speaking to students and at-risk youth about his experience in prison before he knew he would ever regain his freedom.

“I'll never forget the one time that I was telling them that this is not a game. That the officer that held me was not my friend, that he was getting paid to hold me in captivity,”

That first speaking engagement was in 1995 at Bullock County Career Technical Center. It was five years after Champ, then 18, was sentenced to life in prison for murder.

He describes the incident as a drug deal gone wrong.

Champ grew up in Prichard, Alabama, the poorest town in the state, in the 1970s and 1980s. He watched his father get shot and die in the doorway of his family’s home when he was 3. As he got older, he experienced a hostile and racist environment in school and within his community in South Alabama. Champ says he still remembers the 1981 Ku Klux Klan killing of a black teenager, Michael Donald in Mobile. He was only 10 at the time. The case became famous for the $7 million civil verdict that bankrupted one of the most violent Klan groups in the country.

All of this led him toward the path of using and selling crack cocaine, and a street life that he says was “cruel and unpredictable.”

“At a very young age I was brutalized and traumatized by my environment from witnessing the death of my father. After that, I became hopeless, misguided, miseducated, with no strong purpose in life. I never took education seriously, was constantly suspended or expelled out of school, which eventually led to me being put in jail.”

Prison was culture shock. Starting at age 19, Champ would be transferred to six different facilities across the state over the next 14 years. He witnessed stabbings, murder and violence. He said it was easier to get drugs from correctional officers than it was a book or any form of rehabilitation.

At some points Champ was placed in solitary confinement – once,  he said, for as long as two weeks.

“It would be a six-by-eight cell. I was 6'2'' and 225 pounds at that particular time. You got a bed, your toilet and the sink. They feed you breakfast. There’s a 45-minute exercise time outside of the cell. No lunch and they feed you dinner. You shower every other day. Even when they take you out to walk, you’re in another jail. You’re still in a caged-in area in the back of this cell.”

There was no real rehabilitation for Champ while he was in prison. He got his GED and tried to take college courses. But when Pell grants became ineligible for prisoners as a part of President Bill Clinton’s crime bill in 1994, his opportunity for a college education was taken away. Instead, he sought out books about Malcom X, Booker T. Washington and George Jackson and found his own path toward enlightenment. He said the prison system in Alabama was set up to demoralize and exploit individuals and strip them of their identities, but he fought to never let it kill his spirit.

“Even though I suffered many years of incarceration, I never did succumb to the negative environment. I never would become an inmate. I would never become a prisoner. I would never allow them to attach something to me that would make me feel like I would be institutionalized and become a slave or a product of this prison system.”

In August 2004, Champ’s case was set to be reviewed by the Alabama Pardon and Parole Board for the third time. The parole officer at the hearing was previously a correctional officer at a facility where Champ participated in programs speaking to at-risk youth; he recommended that Champ be paroled. At 33, Champ was free from prison.

But despite his physical freedom, Champ still suffers from psychological scars from being behind bars and faces the collateral consequences from his time in prison.

The first year he was incarcerated, Champ’s grandmother passed away. She was his closest relative, but he wasn’t allowed to attend her funeral. During the last call he had with her before she died, she begged him to get out of prison, and to stay out.

Once he was paroled, finding work and a place to live was often difficult.

“One time I was trying to get an apartment. I had been out for two years and had been working but was still denied a place to live in a decent apartment complex based on my criminal conviction. So, one of the harshest things that I still have to encounter today is the ‘Have you been convicted?’ Even though my conviction is nearly 30 years old. The psychological repercussions that are on paper still haunt me.”

Today, Champ still lives in Prichard. He has written a book about his experiences in prison and still frequently talks to at-risk youth at schools, churches and drug rehab facilities. He’s a member of Mobile’s local Faith In Action congregation and works with the group on anti-gun violence program in the city. 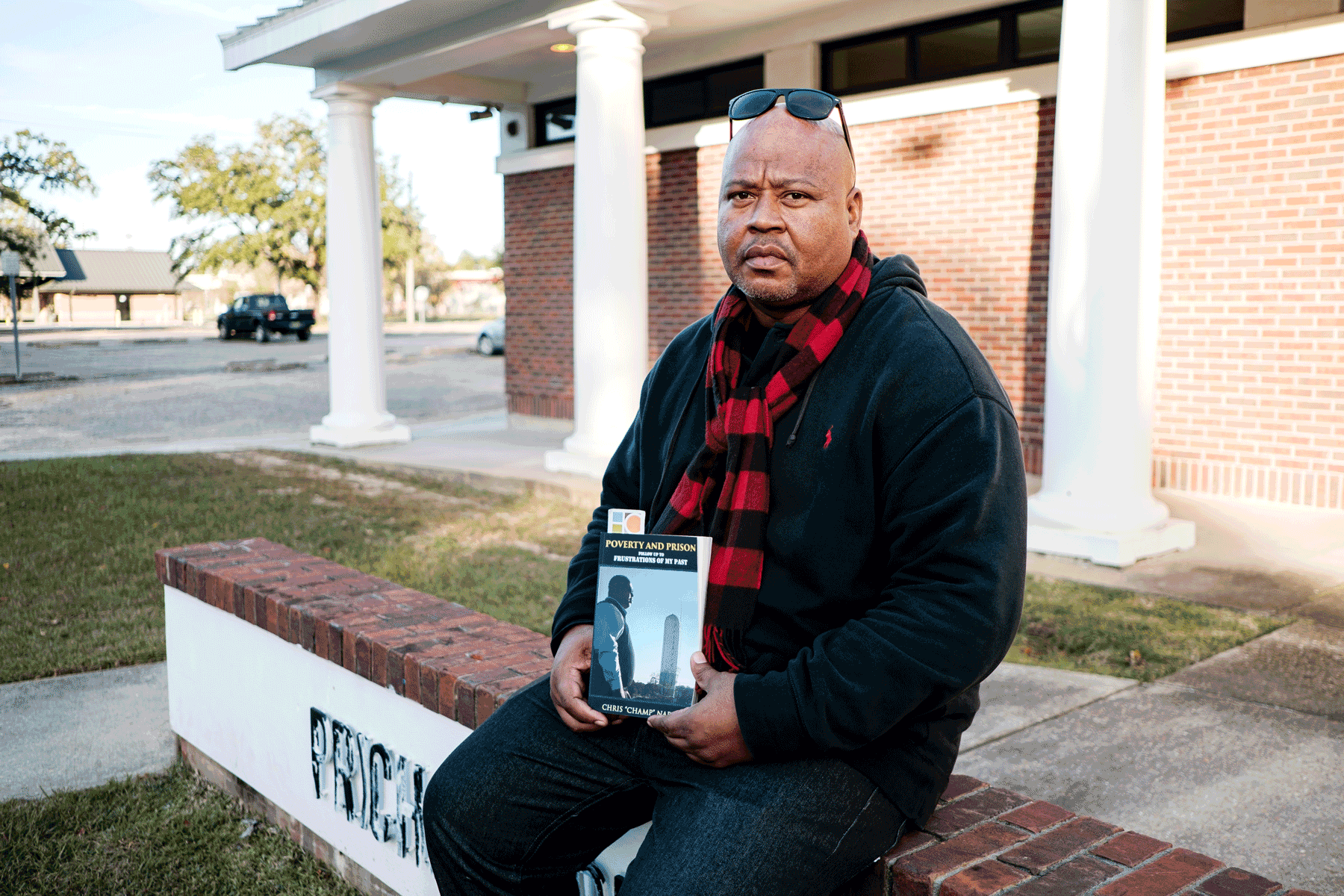 In April 2015, Champ was pardoned for his conviction by the Alabama Board of Pardon and Paroles. The next year he went to register to vote for the first time at age 45 for the 2016 election. That wasn’t easy, either.

“I went down to the registrar’s offices to register to vote. They put my name in the system and were like, no, you can’t vote, you can’t vote, But I always keep a copy of my pardon with me when I go to places like that, and I said, ‘Here is what it says.’ I showed them that line, and they gave me my voter’s card.”

Still, Champ said voting that year was powerful. Since he cast that first vote, other individuals facing prior convictions have reached out to him to learn how to restore their rights.

“I noticed there’s a lot of people that can vote, but that the information is not getting to them. Our vote is our voice.”