When Shanna Rainey was a mother to two young children, she began using methamphetamine.

Over the next 20 years, she would endure a cycle of domestic abuse and substance use that would eventually send her into Alabama’s broken prison system twice. Shanna needed help dealing with the trauma that put her at risk for addiction. But in a state with scant resources and far too many incarcerated people, she found prison to be a hopeless place where people with substance use disorders go practically untreated and can continue to use drugs on the inside.

In the early 2000s, Shanna, who is now 37 years old, was trying to ensure a good future for herself. She was a student at Shelton State Community College in Tuscaloosa, Alabama. It was a demanding time for the new mother. “There just weren’t enough hours in the day to go to school, take care of the kids and work,” she said.

She was also in a bad relationship with a man. “That’s one of my downfalls. Bad relationships,” she said. The relationship and drug use led Shanna to quit school. She began to sell meth, and then, when the drugs ran out, she started making it with her boyfriend.

When her son was 4 and her daughter was 2, Shanna lost custody of them to her mother. “I’ll never forget, going into [the Department of Human Resources], with my mom and dad, and taking a drug test and failing for every [substance] on the test,” she said.

Despite the loss of her children, Shanna continued to use and manufacture meth with her boyfriend. When she lost custody of her children, she said, “At that point, that’s when I kind of lost it, because I didn’t have anything to hold on to, I felt. Well, they’re gone, so why not keep doing anyway.”

She also knew it was only a matter of time before the police would show up.

“We weren’t living like, if the police come, it was pretty much, when.” Sure enough, agents with the West Alabama Narcotics Task Force arrived one day in June 2005; Shanna was convicted for manufacturing methamphetamine later that year. She received a 20-year suspended prison sentence; she was placed on supervised probation for five years.

While Shanna was on probation, her father died. He had bailed her out of jail and provided her with money for most of her life. “He was an alcoholic for most of his life, and mine, and it’s like he understood,” she said, also noting that he was “a bad enabler for me.” 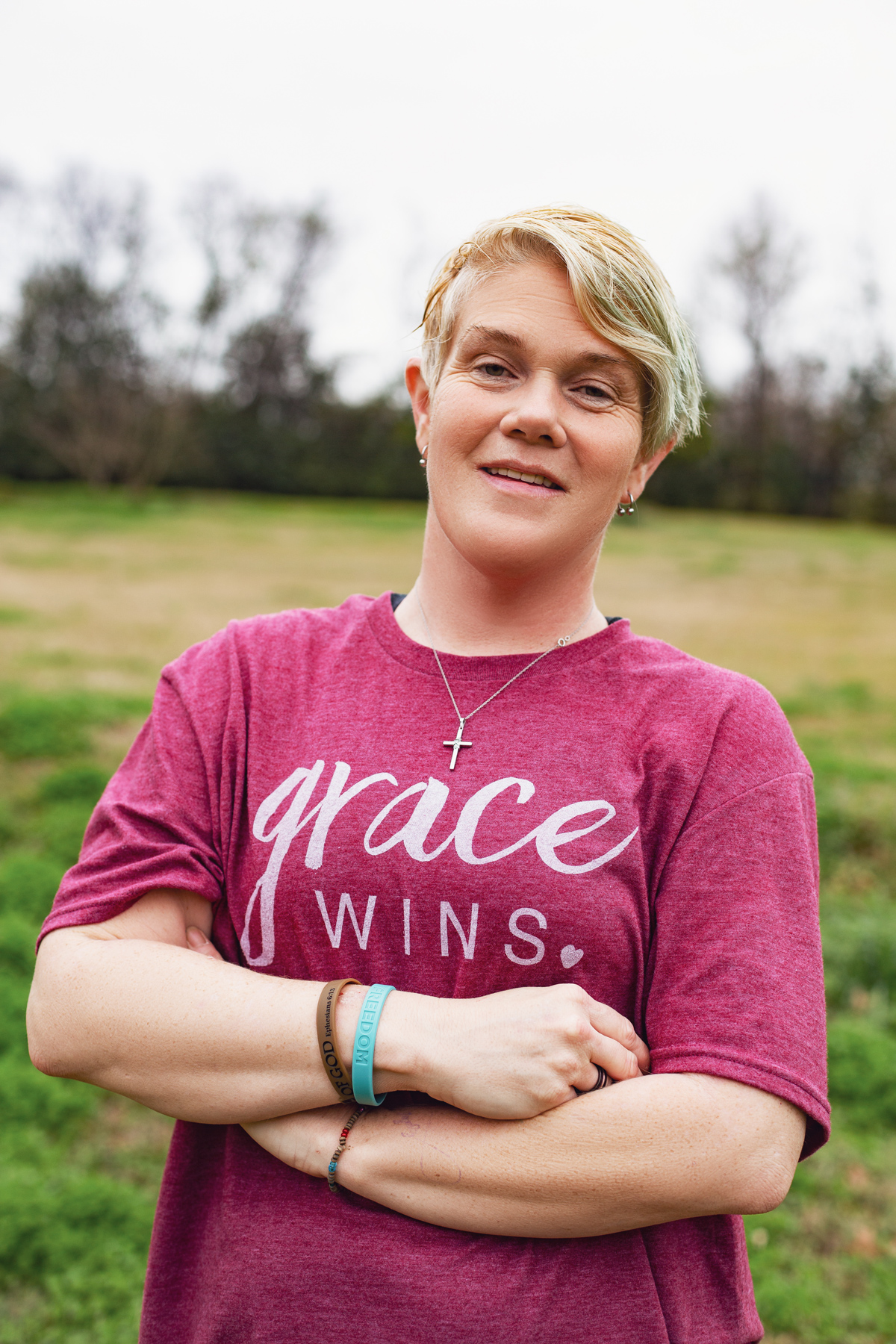 “I don’t remember a lot about that time, except that I went hard after my dad’s funeral,” she said. “He was my best friend.”

Soon, at check-ins with her probation officer, she tested positive for cocaine. About a month later, in December 2006, she stopped reporting to the officer. A judge revoked her probation. Shanna went to county jail to await her transfer to Julia Tutwiler Prison for Women. Shanna found out she was pregnant again while in jail.

She needed help. Instead, she was sent to prison. Shanna gave birth in June 2007 while handcuffed to a hospital bed.

“As far as being handcuffed to a bed while you’re giving birth to a baby, it’s one of the top five worst things of my life. It was just very impersonal, very lonely, very sad,” she said.

The baby was immediately adopted; Shanna had signed the papers before giving birth. The next two years wouldn’t get much easier. Shanna once spent nine months straight in solitary confinement.

In September 2009, however, she found something that helped her begin to understand her drug use. It was the Crime Bill Drug Treatment Program, a six-month course that put her in classes from morning to night with a director who required her to write pages and pages of introspective essays.

The essays helped her learn about the “cognitive” aspect of addiction, she said. Shanna began to see her drug use as a manifestation of other things she needed to cope with. The compulsion to get high was like a tool for dealing with trauma, or “this stuff that you have to get out and get over and work through,” as she put it.

“Since I was in prison, I found that a lot of women, we just go for what doesn’t hurt. And drugs and alcohol numb things. I really believe that [most women in prison] have been through some form of abuse, or something going on in their life to make them turn to drugs. A lot of women are sitting there because of something a man’s done.”

Shanna credits the crime bill program with helping her stay out of prison for five years after she was granted parole in 2010. For a time, Shanna did well in the free world. But she again found herself in an abusive relationship, and by 2014, meth use followed. Then, in 2015, she was an accomplice to a burglary in Baldwin County. She pleaded guilty and went back to prison.

Again, she needed help, but prison didn’t offer it. She completed an eight-week substance abuse program but afterwards continued to use drugs on the inside. “It’s at every other bed,” she said of the drugs in prison. “It’s very easy to get a hold of, and if you’re not just outright done, you’re going to continue to lose.”

What’s more, Shanna believes the program that had helped her so much had deteriorated greatly due to prison overcrowding. The long introspective essays – and the possibility for the transformative insight they provided – were gone. Instead, she said program participants were given workbooks.

Ultimately, Shanna didn’t stop using drugs because of her time in prison, but in spite of it.

In 2015, her mother died, leaving Shanna’s son, who had been in her mother’s custody, “thrown to the wolves” at a group home. Over the next three years Shanna all but lost contact with him. But one day in 2018, the two got in touch. The son, now in his late teens, gave his mother troubling news: he was struggling with his mental health.

Rather than “mom up,” Shanna said, she chose to get high. But that was the last time.

“I was like, you know, I’ve been getting high my whole life, and the choices I’ve made behind getting high have led me to not being there for him. How selfish of me. How selfish of me to continue doing what I’m doing. And I just put it down. I said, ‘Lord, please take that from me.’ And I woke up that next day and vowed I’d never do it again. And I haven’t.”

Nineteen months after she stopped using, she is back in touch with her son. Shanna lives at a house run by the charity Aid to Inmate Mothers in Montgomery, where she has finally received the support she needs – help that has included everything from food to assistance in obtaining a government ID. People look up to her for her sobriety. She has a job, and plans to move out on her own soon.

There’s a word she uses to describe so many things in her life these days: “blessings.” After her experiences in prison, she uses the word for good reason.