Stand Your Ground lethal force laws deepen disparities in the legal system and disproportionately justify the use of violence by people who are white and male against people who are not.

In July 2018 at a convenience store near Clearwater, Florida, a 28-year-old man named Markeis McGlockton was shot and killed in front of his longtime girlfriend and their three young children following a minor confrontation with another customer in the parking lot.

Security camera footage of the killing showed that McGlockton was at least 10 feet away from the gunman, Michael Drejka, and beginning to turn away when the lethal shot was fired. McGlockton, a Black man, was unarmed. Drejka, who is white, was initially not even arrested, despite the security camera footage, multiple credible eyewitnesses and Drejka’s own known history of threatening violence with a firearm.

The reason? The county sheriff announced at a press conference the day after the incident that he believed Drejka shooting McGlockton was “within the bookends of ‘stand your ground’ and within the bookends of force being justified” under Florida law. Being shoved in a parking lot – in an altercation instigated by Drejka – was deemed sufficient grounds for lethal force. (Two weeks later, the sheriff’s office turned the case over to the state attorney’s office, and Drejka was ultimately convicted of manslaughter. This chain of events is common; law enforcement and prosecutors have at least initially cited Stand Your Ground laws in determining not to arrest the killers of Trayvon Martin, Jordan Davis, and more recently, Ahmaud Arbery, to name only a few.)

McGlockton’s killing is the deadly example that opens a new report jointly produced by Giffords Law Center to Prevent Gun Violence and the SPLC Action Fund, “‘Stand Your Ground’ Kills: How These NRA-Backed Laws Promote Racist Violence.” Sadly, many more examples follow, as well as damning statistics and sobering analysis that prove beyond a doubt that Stand Your Ground laws are a failure and an injustice.

Stand Your Ground laws – which limit or remove the expectation that lethal force in self-defense is only justified in situations where it does not seem safe to step away instead – deepen disparities in the legal system and disproportionately justify the use of violence by people who are white and male against people who are not. Moreover, research shows these laws lead to significantly more killing – in any given month, 30 to 50 people across the country are killed as a result of these laws – and have no deterrent effect on other crimes.

Stand Your Ground laws cannot stand. They encourage a trigger-happy culture of vigilantism that cheapens the value of human life. They deepen vast and harmful disparities in our legal system. They make us less safe. We urge you to read our report – share it widely – and join us in our fight to repeal these laws state by state.

Together, we can create a society that rejects the shoot-first principles of Stand Your Ground laws and the powerful gun lobbies that have enabled them.

Read the report by clicking on the image below. 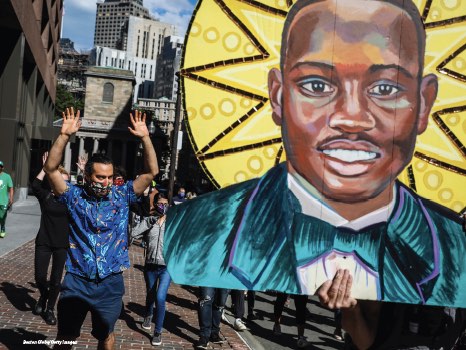