LaKeshia Barnett avoids contact with the public in her job at the U.S. Postal Service, where she wears a mask and practices social distancing to the fullest extent possible. She is worried about infecting family members who are battling health conditions including asthma and hypertension that heighten their risk of dying from COVID-19.

Barnett, 26, has voted regularly since first registering at 18, and she intends to vote in the November election in her home state of Louisiana. 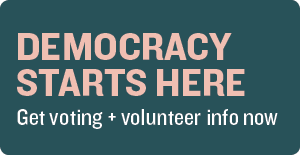 Barnett would like to vote by absentee ballot to avoid the risk to her family of doing so in person. But under the state’s current COVID-19 Emergency Application for an absentee ballot, voters like Barnett may not qualify because they must have a serious health condition, be under a doctor’s order to quarantine (or caring for someone who is), or be currently experiencing symptoms of COVID-19.

That means voters with vulnerable family members are forced to choose between their right to vote and their loved ones’ health – facing the decision of whether to risk voting in person early or on Election Day, both of which promise long lines and crowded conditions.

Barnett, who is Black, is one of several Louisianans whom the Southern Poverty Law Center (SPLC) has represented in court, seeking to protect their voting rights.

“Louisiana’s election officials have failed in several respects to protect the state’s voters during the pandemic,’’ said Caren Short, senior staff attorney for the SPLC’s Voting Rights Practice Group. “Instead of ensuring that all voters could vote safely from home if they chose to – as legislators were allowed to do – they clung to the misguided and politically motivated myth of voter fraud to justify unnecessary and discriminatory restrictions on absentee voting.”

As  part of its mission to ensure equitable access to the ballot box in Louisiana and throughout the Deep South, the SPLC is investing up to $30 million from its endowment in nonpartisan, nonprofit voter outreach over several election cycles. The aim is to increase voter registration and participation among people of color, like Barnett.

In addition to Louisiana, the new Vote Your Voice initiative – a partnership with the Community Foundation for Greater Atlanta – supports voter education and mobilization in Alabama, Florida, Georgia and Mississippi.

The Vote Your Voice grantees – currently 40 in total – are encouraging millions of voters across the South to exercise their fundamental right to vote and ensure that they are able to elect, and hold accountable, candidates who represent their values.

The Vote Your Voice initiative is just one of the tools the SPLC is using to fight voter suppression in Louisiana.

Last year, the SPLC and its allies successfully supported the passage of Louisiana Act. No. 636, which restored the right to vote to anyone with a felony conviction, as long as they had met certain conditions. As of March 1, 2019, the law allows people who have been out of prison for five years but remain on probation or parole to register to vote. Previously, people with felony convictions could regain their right to vote only after completing probation or parole. 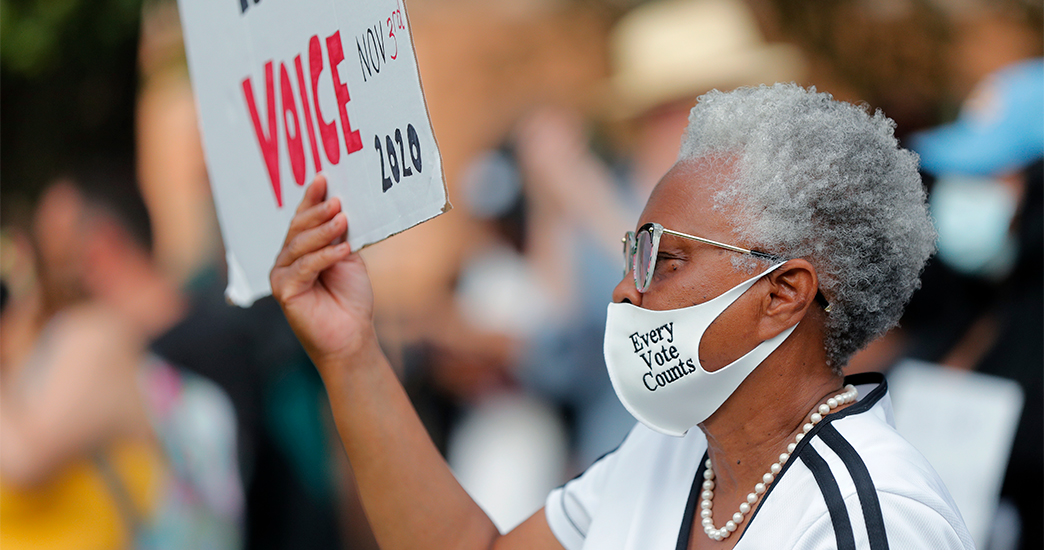 “Louisiana’s election officials have failed in several respects to protect the state’s voters during the pandemic,’’ said Caren Short, senior staff attorney for the SPLC’s Voting Rights Practice Group. “Instead of ensuring that all voters could vote safely from home if they chose to – as legislators were allowed to do – they clung to the misguided and politically motivated myth of voter fraud to justify unnecessary and discriminatory restrictions on absentee voting.” Photo by Gerald Herbert/AP

Vote Your Voice grant recipients, including Voice of the Experienced (VOTE), Power Coalition for Equity and Justice and Citizen SHE United, worked with the SPLC in the effort to pass Act 636, as well as to register people with felony convictions and encourage them to vote.

The SPLC is also engaging Louisiana voters by working with the NAACP Legal Defense and Educational Fund and the state’s election protection coalition to monitor polls, assist with poll monitor training and provide attorneys to help troubleshoot any challenges voters encounter through Election Day.

In May, the SPLC sued Louisiana on behalf of LaKeisha Barnett and other plaintiffs – including Crescent City Media Group and the League of Women Voters of Louisiana – ahead of the state’s July election, seeking absentee ballot access for all voters during the pandemic.

The state had passed an emergency election plan for July and August that left out many who needed to vote via absentee ballot amid COVID-19 and failed to waive a burdensome witness requirement. The state also failed to have any plan in place for the November general election. The plaintiffs asked a federal court to enjoin the state’s excuse and witness requirements for the July, August, November and December elections.

“Unfortunately, our case was dismissed ahead of the July election, but we continue to work with our Louisiana partners to ensure that voters know how to request and complete their absentee ballot and how to stay safe if voting early or in-person on Election Day,” Short said.

As late as mid-August, the state had failed to put in place any plan to allow voters with COVID-19 concerns to vote by absentee ballot. SPLC partners – including Vote Your Voice grantee Power Coalition for Equity and Justice – filed suit asking for the July/August plan to be reinstated. The federal court reinstated the July/August plan, which allows the most vulnerable voters to get an absentee ballot and adds three days of early voting. Still, some who need to vote absentee remain ineligible, and others are skeptical about voting in this manner after the secretary of state’s office failed to ensure delivery of thousands of absentee ballot applications in the July primary, Short said.

The SPLC is working with its partners to encourage the secretary of state to make certain that voters are aware of their options for requesting an absentee ballot.

“The restrictions on absentee ballots have added extra layers of complexity on top of a year already made complex by COVID and the presidential election,” said Martha Christian Green, a League of Women Voters of Louisiana board member. “The League of Women Voters of Louisiana, with other leagues around the nation, sees as its primary and nonpartisan task the education of voters in all aspects of how to exercise the right to vote for which so many have fought in our nation’s history.”

“Thankfully, advocates, organizers, the press and voters are rising to the task of ensuring that every voter will find a way to vote,” Short said.

Here are the Vote Your Voice grantees working to ensure equitable access to the ballot box in Louisiana:

Citizen SHE United strives to build an aligned group of Black women who inform, advocate for and enact a policy agenda that seeks to address the needs of Black women in Louisiana.

The Vote Your Voice grant will help the organization increase voter participation among Black women across the state from 157,000 to 300,000 through online engagement, a peer-to-peer voter registration program, youth civic engagement and legal training against voter suppression.

“We can no longer suggest that anyone votes, but we must demand it,” said founder Nia Weeks. “The semblance of democracy that we feel even a little bit depends on everyone’s participation.”

The Micah Project develops leaders among citizens in the greater New Orleans area, empowering them to organize their communities and find solutions to their problems.

“Many of our ancestors have fought and died for our right to vote,” said Executive Director Daphne Haley. “The actions of many people today during this election will determine the future of our children and our children’s children. And without their vote they have no say in the future outcome of our city, state and nation.”

With the help of the Vote Your Voice grant, the Micah Project will engage 15,000 households – encouraging them to exercise their right to vote.

The Power Coalition for Equity and Justice (PCEJ) is a statewide organization that serves communities that are systematically blocked from such opportunities and resources as housing, employment, health care, democratic participation and due process.

PCEJ was one of the lead plaintiffs in the Harding v. Edwards lawsuit, which challenged Louisiana’s emergency election plan for the November and December elections. A U.S. District Court judge ruled in favor of the plaintiffs on Sept. 16.

Because of the Vote Your Voice grant, the Power Coalition for Equity and Justice will have the resources needed for its 2020 get-out-the-vote effort, which has 1.3 million contacts across Louisiana. These activities will focus on young people, returning citizens, seniors and immigrants who are infrequent voters.

Project South is a leadership development organization that helps build movements and provides political and economic education for personal and social transformation.

“The history of voter suppression is as long as the history of voting in our democracy,” said Emery Wright, co-director. “In this year’s election cycle, although we are seeing increased and widespread efforts to suppress the vote, from misinformation to restricted access, we are also seeing a groundswell of enthusiasm and defiant courage at the grassroots of our communities to educate ourselves about what is on the ballot, vote early and make sure our votes are counted.”

With the help of the Vote Your Voice grant, Project South and its partners will reach 5,000 to 10,000 Black, low-income and young community members in Georgia, Louisiana and Mississippi with events, drives, voter education activities and public service announcements on Black-owned radio stations.

“The late implementation of the [state’s] emergency election plan and a lack of information being pushed out is resulting in confusion about options for voting in person or by mail,” said Nicole Jolly, director of strategic initiatives and special assistant to the president of the Urban League of Louisiana. “Many individuals and organizations are becoming active in voter education to try to ensure residents are informed.”

The group will use the Vote Your Voice grant to launch a campaign aimed at 300,000 people to inform them of their voting rights, engage younger voters and increase voter education. Efforts will include phone banking in multiple languages in the Latinx community and other communities of color.

Voice of the Experienced (VOTE) began when a group of men at the Louisiana State Penitentiary, commonly known as Angola, created the Angola Special Civics Project. In 2004, one of those men, Norris Henderson, founded VOTE after his release. VOTE is now the leading criminal justice reform organization in Louisiana that is operated by formerly incarcerated people, their families and allies.

“People with felony convictions are trying to get registered, but the process is not clearly listed anywhere,” said Deputy Director Bruce Reilly. “It is critical that we band together and share our resources, and we are able to engage our people across the state to turn out and be recognized by our elected officials.”

With its Vote Your Voice grant, VOTE will register people who are formerly incarcerated, have a conviction or have never voted before, and will encourage them to vote.