The events of Jan. 6, 2021, made unmistakably clear that racial bias is a national security threat.

The events of 2020 – George Floyd’s extrajudicial killing played out over eight minutes and 46 seconds on millions of screens, Breonna Taylor shot to death in her home by police, among far too many others – finally moved Americans to a reckoning with the racism that has always been a mortal threat to the lives of Black people in this country.

Now the rest of the story has been unmasked. Racism threatens not just the lives of the Black, Indigenous and people of color who are its obvious targets. Racism threatens the survival of our democracy and our security as a nation. 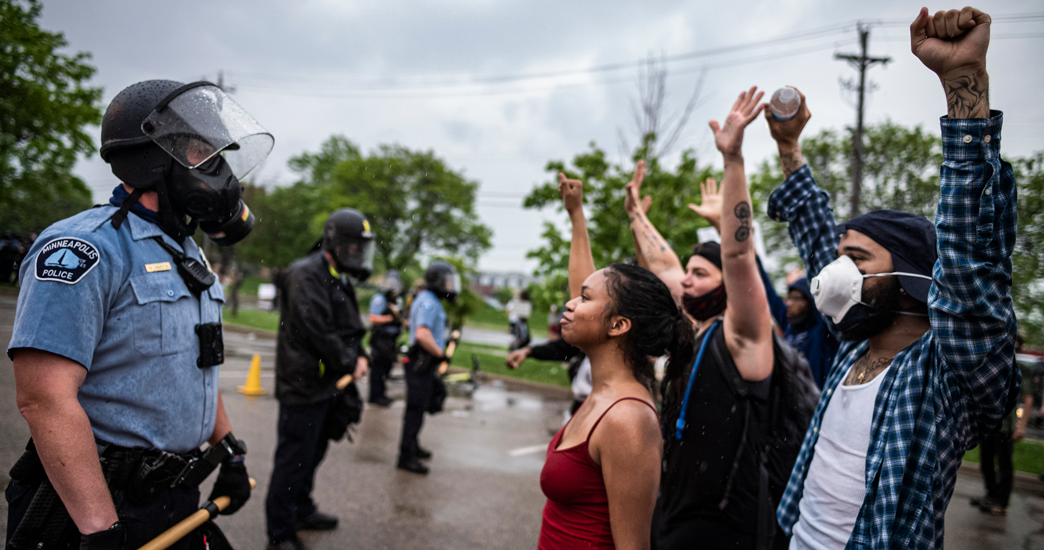 ​Protesters peacefully face off with Minneapolis police on May 26, 2020, following the killing of George Floyd, a Black man who died after an officer kneeled on his neck and ignored his assertion that he could not breathe. Photo by Getty Images/Star Tribune/Richard Tsong-Taatarii.

The real horror at the end of the day last Wednesday was not the white nationalist, “alt-right” breach of the U.S. Capitol. It was the willingness of our institutions to turn a blind eye to the white nationalist violence building in this country over the last four years, and the racial bias in law enforcement that provided permission for that violence to proliferate.

Last September, FBI Director Christopher Wray told Congress that “racially motivated violent extremism” led by “people subscribing to some kind of white supremacist-type ideology” was the nation’s leading domestic terrorist threat. That was three weeks to the day before the attempted kidnapping (initially planned as an execution) of Michigan Gov. Gretchen Whitmer.

The president relentlessly fueled these extremists with conspiracy theories and recruitment of his supporters — including white nationalists and militia members — into an “army for Trump.” He repeatedly spurred them to violence, first in response to public health measures responding to COVID-19, then to attack peaceful Black Lives Matter protesters. The Associated Press (AP) called these repeated armed mobilizations encouraged by the president “a series of dress rehearsals.” As the AP wrote of last week’s storming of the U.S. Capitol, “the nation was shocked. But not unwarned.” 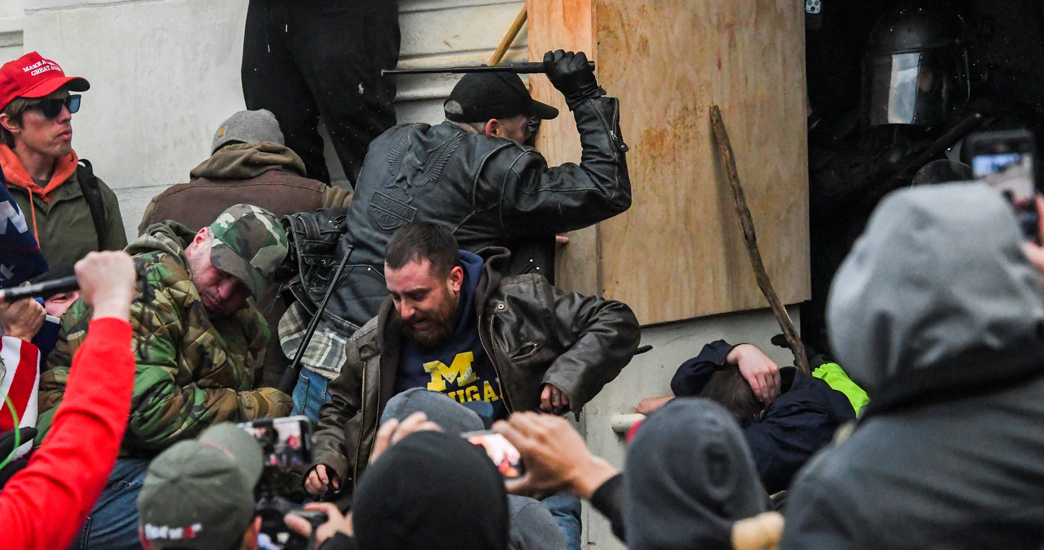 Supporters of President Trump violently clash with security forces as they try to enter the U.S. Capitol in an effort to stop the certification of the legitimate presidential election results on Jan. 6, 2021. Photo by Reuters/Stephanie Keith.

There is only one answer to the question of why these abundant warnings went unheeded: racism. Our institutional unwillingness to address racial bias in policing left five dead – including a police officer – laptops and files bearing confidential national security information stolen, our nation’s enemies emboldened, and a world horrified by the sight of armed men brandishing hostage-taking gear and the Confederate flag breaking and entering into the U.S. Capitol while gallows they had erected stood outside. What’s more, the president put out a video message proclaiming, “We love you. You’re very special.”

Our institutional unwillingness to address racial bias in policing led the political center to turn a blind eye and deaf ear as the president sent federal troops into American cities to quell largely peaceful demonstrations against the bias in policing now shown to be such a national threat. We and others, including Seattle Mayor Jenny Durkan, warned at the time that these acts of federal authoritarianism – betraying a fundamental conservative value of local control – were dress rehearsals for the martial law the president envisioned in case of his electoral defeat.

As we saw last week, these dress rehearsals culminated in a stunning success on the international stage. The dress rehearsals whipped up grievance in a nation traumatized by a global pandemic and its economic fallout. The dress rehearsals helped to hone the tactics used to breach the U.S. Capitol. Most importantly, the lack of a unified national condemnation of the racial bias endemic in our nation’s law enforcement constituted a red carpet and open door for the violent attempt to overthrow the results of a constitutional fair and free election.

Systemic racism and unconscious racial bias have long been documented in U.S. law enforcement, as throughout all of our institutions. While there are many law enforcement officers and even a few departments that contradict this norm, the problem is real and it is deadly. As the Brookings Institute reports:

As unacceptable as this reality is, the problem is even worse. Systemic racism and racial bias not only lead to deadly and discriminatory policing of Black, Indigenous and people of color (BIPOC) in our communities, it also permits law enforcement collusion – both active or implicit – with white supremacist beliefs and the white nationalist movement.

The implications of far-right ideologies within law enforcement were detailed last year in a report by the Brennan Center for Justice.

The report, titled Hidden in Plain Sight: Racism, White Supremacy, and Far-Right Militancy in Law Enforcement, said: “While it is widely acknowledged that racist officers subsist within police departments around the country, federal, state, and local governments are doing far too little to proactively identify them, report their behavior to prosecutors who might unwittingly rely on their testimony in criminal cases, or protect the diverse communities they are sworn to serve.”

The ideological support and even membership in extremist far-right organizations among law enforcement has been obscured by a cynical and discredited but still widely perpetuated narrative of both-siderism. Charlottesville was more than the debut on the national stage of the white nationalist and white supremacist forces that felt emboldened by Trump’s election. Charlottesville popularized the far-right falsehood that depicts armed vigilantes and organized paramilitaries as righteous defenders of communities and “heritage.” And it was the beginning of the mainstream acceptance of attacks on peaceful, constitutionally protected protesters, as documented in the Southern Poverty Law Center report When the ‘Alt-Right’ Hit the Streets: Far-Right Political Rallies in the Trump Era.

This both-siderism persisted even through the insurrection at the U.S. Capitol, with some lawmakers blaming Black Lives Matter protesters or undercover “antifa” for what white nationalist groups had spent months openly planning, with the president’s encouragement.

In contrast to the prevailing narrative, a study of over 7,000 racial justice protests in all 50 states last May and June found that 96.3% of events involved no property damage or police injuries, and in 97.7% of events, no injuries were reported among participants, bystanders or police.

The researchers wrote in The Washington Post: “These figures should correct the narrative that the protests were overtaken by rioting and vandalism or violence. Such claims are false. Incidents in which there was protester violence or property destruction should be regarded as exceptional — and not representative of the uprising as a whole.

“In many instances, police reportedly began or escalated the violence, but some observers nevertheless blame the protesters. The claim that the protests are violent — even when the police started the violence — can help local, state and federal forces justify intentionally beating, gassing or kettling the people marching, or reinforces politicians’ calls for ‘law and order.’”

The racism inherent in the continued mischaracterization of racial justice protesters has enabled inattention and confusion not only at the national level, but also at the municipal and state levels, which is where democratic practice should find its strongest protection.

When the political center fails to coalesce against fascism, it is hypocritical to scapegoat those anti-fascists who believe they are keeping faith with the more than 400,000 Greatest Generation American lives lost in World War II. If the political center doesn’t stand against the obvious reality of ongoing and deadly racism in our law enforcement agencies, it will continue to be up to the young people with the stamina to come out night after night to press for change in the streets.

Police reform is absolutely necessary, as one piece of redressing the structural racism undergirding the entire carceral system. But what we have to remember is, at the end of the day, inclusive democracy is facing twin threats: the legacy of white supremacy and the increasingly emboldened white nationalist movement and accompanying armed paramilitary defiance of the rule of law.

Defending our democratic freedoms and institutions should not be left to the young people in the streets, branded by the Trump administration as “terrorists” simply for opposing extra-legal authoritarianism and sounding the alarm over the early signs of fascism. It’s the job of the middle, liberals and conservatives. It’s the job of business, religious and municipal leaders.

The only way forward is to account for the failures in our national security that were on display in the attack on the U.S. Capitol, a failure fully underwritten by our institutional unwillingness to face the fact of unconscious and structural racism.

Eric K. Ward is a senior fellow with the Southern Poverty Law Center and Race Forward. He is also the executive director of Western States Center.