Antigovernment extremist groups mobilized around the general election in 2020. The antigovernment movement’s response mirrored Trump’s rhetoric falsely claiming that the election was “stolen.”

The antigovernment movement as a whole tends to oppose the federal government only during Democratic presidencies, with few exceptions. The movement views Trump as a government outsider cleaning up from the inside, shepherding the government back to its “intended” form and purpose. In response, groups have redirected most of their ire toward state and local government officials.

In 2020 specifically, antigovernment groups targeted governors and local public health officials by objecting to coronavirus restrictions and were critical of state and local election officials.

In addition to opposing government from the outside, many antigovernment figures now are attempting to run for public office.  According to a report by the Institute for Research and Education on Human Rights, several leaders from Ammon Bundy’s new People’s Rights network aim to run for office in an attempt to “become” the government. This group started forming in March 2020, and its membership consists of militia groups, conspiracists, anti-maskers, anti-vaxxers and others from the far right who have united around protesting COVID-19 restrictions. The antigovernment militia group the Oath Keepers also appear to be using this strategy at the local level. In the 2020 election cycle, large numbers and types of extremist-tied candidates ran for office. Marjorie Taylor Greene and Lauren Boebert, both with known affiliations to the antigovernment conspiracy theory QAnon, were elected to U.S. Congress. 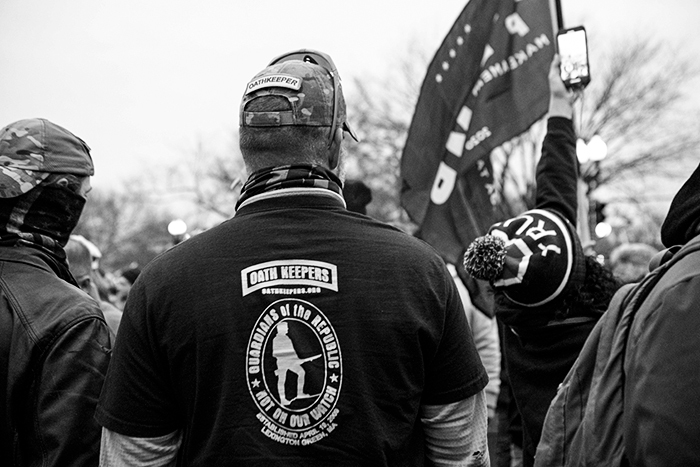 Men sporting gear identifying them as “Oath Keepers,” which the Anti-Defamation League calls “a collection of right-wing anti-government extremists” are among the massive crowds gathering in Washington, D.C. to support outgoing President Donald Trump as the U.S. Congress meets to formally ratify Joe Biden as the winner of the 2020 Presidential election on Jan. 6, 2021. Photo Credit: Hannah Gaber-USA TODAY Network

Constitutional sheriffs, who form another movement within antigovernment extremism, believe sheriffs are the highest law enforcement authority in the country and have the ability to use their elected positions to defy federal laws they deem unconstitutional. The roots of this ideology stem from the Posse Comitatus and ideas around county supremacy. Evidence of this movement’s influence can be seen among county sheriffs who refused to enforce COVID-19 mandates.

Early in the presidential election cycle, baseless claims and disinformation circulated about the inadequacies of vote-by-mail and allegations of voter fraud. As the election approached, these messages continued to spread in the online echo chambers of social media.

Throughout 2020, antigovernment groups engaged in and spread misinformation about then-candidates Joe Biden and Kamala Harris. Typical false narratives focused on unsupported and already disproven accusations of misconduct by both Biden and his son Hunter and the family’s ties to foreign countries. Antigovernment extremists consistently accused Harris of being a socialist and Marxist and predicted that she would take over as president soon after the election.

The Constitution Party, an antigovernment group, posted a blog on their website that stated, “We may safely assume that she [Harris] is on board with the Democratic/Progressive/Marxist program that will replace our Constitution and make America a totalitarian state.” It went on to say: “If Biden wins the election a discovery will be made about his mental competence… If Biden steps down, the Vice-President-elect becomes President. Say hello to President Harris.”

At the first presidential debate on Sept. 29, Trump encouraged his supporters to watch the polls and called on the far-right group the Proud Boys to “stand back and stand by,” comments some antigovernment groups heard as calls to action.

On Oct. 29, Stewart Rhodes, leader of the militia group the Oath Keepers, appeared on Infowars with Alex Jones, a conspiracy theorist and antigovernment extremist, and touted that members of Rhodes’ organization would be at polling locations to “stand up and protect people on Election Day” from anti-Trump left-wing groups. 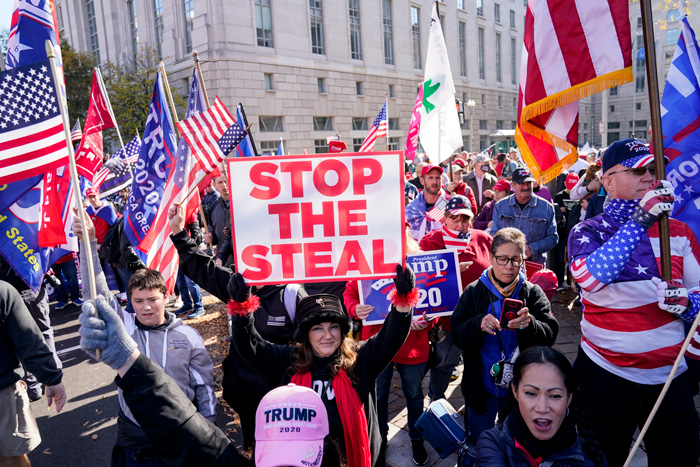 Pro-Trump protestors gathered in Washington, D.C. in December 2020 to support Donald Trump and overthrow the legitimate results of the November election.

Despite reports and threats by militia groups of showing up at polling locations, these promises largely went unfulfilled, but the effects of potential armed voter intimidation on voter behavior cannot be known fully.

In the days immediately following the election, concerns around ballot counting, calls to “stop the count” and claims of a “stolen” election started spreading throughout all segments of the antigovernment movement, echoing Trump’s accusations, and prompting several protests at ballot-counting locations.

On Nov. 6, two Virginia men, Joshua Macias and Antonio Lamotta, were arrested on weapons charges outside a Philadelphia convention center where votes were being counted. According to prosecutors, their plan was to deliver fake ballots to the location because they were concerned about the ballot-counting implementation. In their vehicle, which was decorated with QAnon decals, police found weapons and hundreds of rounds of ammunition.

On Nov. 10, Stewart Rhodes made another appearance on Infowars, and stated that his group had “men already stationed outside D.C. as a nuclear option in case they attempt to remove the president illegally, we will step in and stop it.” He continued by saying, “We’ll be inside D.C., we’ll also be on the outside of D.C. armed, prepared to go in, if the president calls us up.”

QAnon followers and armed militia members also have attended “protect the vote” and “stop the steal” protests. They also went to the “Million MAGA March” (while law enforcement declined to put an exact number on attendance, it was well below 1 million, and the permit was for just 10,000) that took place in D.C on Nov 14. Initially, these events largely were organized in Arizona, Georgia, Michigan and Pennsylvania, states where votes still were being counted or where Biden’s victory was narrow. Similar protests now have occurred in numerous states and cities around the country

Antigovernment movement extremists claimed the presidential election was stolen by the Democrats, and Trump’s refusal to concede the election only exacerbated these claims. Many in antigovernment groups suggested Trump should use the 1807 Insurrection Act and refuse to leave office since the Democrats rigged the election.

Given the antigovernment movement’s previous and well-established pattern of undermining trust in public officials and institutions, and especially in light of its belief that the 2020 presidential election was “stolen” and the Biden presidency is illegitimate,  the movement is expected to continue engaging in efforts to sow distrust in our democratic systems. Eliciting fears around the idea of a “corrupt” government, intimidating lawmakers and public officials whose policies they oppose and infiltrating political institutions by running for office all are strategies we likely will continue to see from the antigovernment movement.