The project began with a simple question: “What can we do?”

After the death of George Floyd at the hands of Minneapolis police on May 25, 2020, the nation was shocked and protests abounded. During this time of turmoil, three men in Richmond, Virginia, wanted to answer the question of how to create social justice change and expose the suffering Black people in their city had endured since before the Civil War.

Within six months, they had found a solution, creating Hidden in Plain Site (HIPS). This multimedia tour, which uses virtual reality and augmented audiovisual technology, exposes the invisible history and centuries-long suffering of Black people in Richmond.

Seeking to uncover Richmond’s long-buried secrets about racial injustice, Dontrese Brown, Dean Browell and David Waltenbaugh scoured the city to find places like Lumpkin’s Jail – the epicenter of one of the main slave-trading hubs in the U.S. – where enslaved people were held for purchase in the 1800s.

But where the jail once stood, they found only a patch of grass and overpasses where Interstate 95 is suspended above parking lots. Three weathered interpretive signs reminding the public of the jail’s presence leave little indication of the pain and sorrow that took place here.

“It was the most horrific place you could ever imagine,” Brown said. “This wasn’t a place like a jail. This was a place where slaves were kept until they actually walked to the market where they were sold or hanged. Under the overpass, if they were hanged, they were hanged right there, in Richmond’s ‘Burial Ground for Negroes.’”

The men were shocked to discover that this site had been hidden from the city. Thousands of vehicles drive over I-95 each day. Pedestrians walk through the parking lot without ever knowing they are quite literally passing by a long-forgotten cemetery.

But there was more.

Richmond – a city known for its infamous Monument Avenue, which once hosted the largest number of Confederate monuments in the country – had erased other sites that spoke to the Black experience, including happier ones like Jackson Ward – the "Harlem of the South."

Through their project, Brown, Browell and Waltenbaugh have virtually brought history back to life. 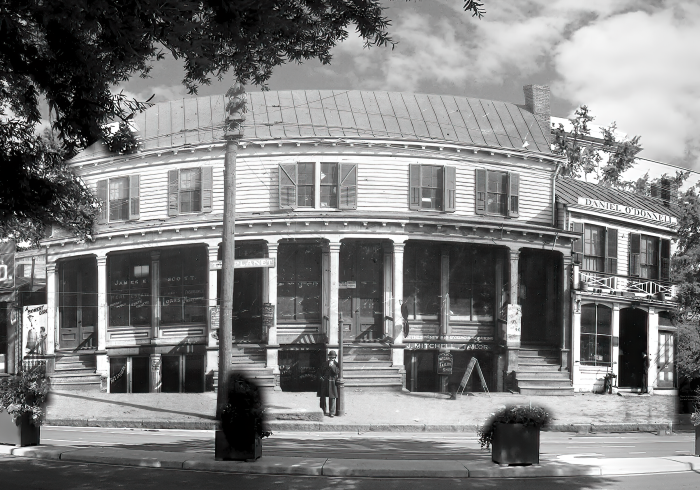 The Swan Tavern, built in 1781 and demolished in 1904, operated as a hotel and bar before it became home to The Richmond Planet, a weekly Black-owned newspaper founded by formerly enslaved Africans. Image courtesy of Hidden In Plain Site.

With immersive media and by augmenting what these historic sites looked like then compared to now, Waltenbaugh hopes that the Hidden in Plain Site: Richmond tour – the first of many that HIPS is planning – will draw empathy from viewers.

“In an effort to help reveal the truth of systemic racism, we wanted to create an experience that allows individuals to understand it from a perspective other than their own,” Waltenbaugh said.

In February, the Southern Poverty Law Center (SPLC) stated in an update to its Whose Heritage? report that Virginia had removed 71 Confederate monuments and symbols after Floyd’s death. Yet many such memorials remain. HIPS highlights the plight of the Black experience in Richmond – a former capital of the Confederacy – by showcasing historical sites that the city has allowed to fade into the background.

“Erasing the markers where violence was inflicted upon African Americans prevents us from learning from the past, acknowledging responsibility for their suffering, and creating a path to remedy justice,” said Susan Corke, the SPLC’s Intelligence Project director. “There is an American legacy of racism and oppression. We perpetuate injustice by papering over the past or by trying to revise history with Confederate monuments that falsely glorify it. HIPS is an important contribution to helping us understand Richmond’s full history.”

The HIPS founders plan to continue their storytelling on a national level, highlighting other communities whose histories have been hidden, including the LGBTQ+ community and Indigenous communities. The next city HIPS plans to tackle is Charleston, South Carolina. Already in the works are a summer feature on the nationally televised PBS travel docuseries The Good Road and a collaboration with Discovery Education.

“We are extremely humbled,” Brown said. “We had no idea we were on the cusp of making tremendous impact not only to the city, but to the state and also the nation. It’s something to be proud of, and I’ve grown to love David and Dean through this project more than I could’ve imagined. It’s uniquely imperative to know like-minded individuals who can work together and do something impactful that shakes the core of our nation.”

HIPS begins its tour of Richmond at Lumpkin’s Jail, with a 360-degree view of the former holding facility as it is today: a lone trailer, traffic cones, storage units, the parking lot and an 18-wheeler traveling high above on I-95.

As the tour progresses, HIPS augments the frame, showing viewers an image of the jail as it once was – “a place of the utmost cruelty,” says the narrator, voiced by Brown, 48.

Virtually transported to what was the Wall Street of its time, the viewer can hear the sounds of enslaved people screaming and pleading for their lives from inside the jail. Their cries are mixed with cheers from the street. These are the voices of white people who intend to purchase the enslaved people.

The buyers can be heard roaming outside the jail, waiting to make their purchases of human beings while enthusiastically chanting, “Yes! Yes!” as if they were at a circus. 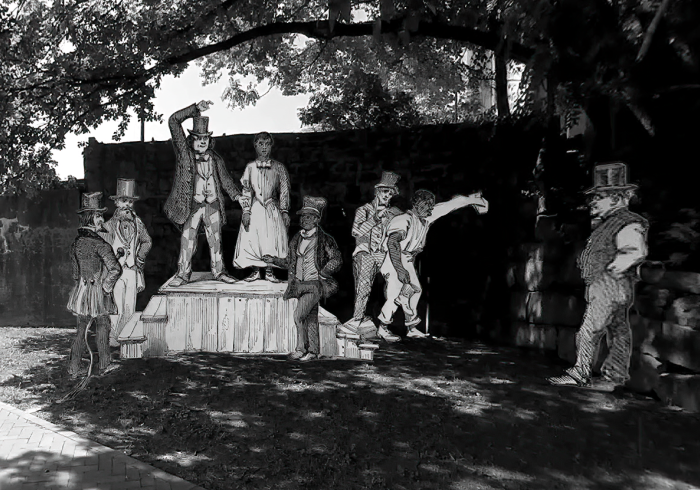 This image is a virtual re-creation of the auction site once located at "The Devil's Half Acre,” just a stone's throw away from Lumpkin's Slave Jail and the Shockoe Hill African Burying Ground. Image courtesy of Hidden in Plain Site.

Through HIPS, viewers get a glimpse of how this site, now otherwise forgotten, once resembled a house of horrors.

“We were standing on this large, grassy land where my ancestors were buried,” Brown said. “We wanted to make sure we started the tour where there was the most pain and suffering.”

Just a stone’s throw away from the jail site, the tour takes you to the “Devil’s Half-Acre,” the site of the gallows where participants in a rebellion led by enslaved Black American Gabriel Prosser were hanged on the African Burial Ground and tossed away like trash.

In the spot where Henry “Box” Brown packed himself into a shipping crate at Richmond’s Exchange Hotel and Ballard House – gambling on a chance at freedom and remaining inside the crate for 27 hours until reaching Philadelphia – there are now typical, downtown structures you would find in any city. 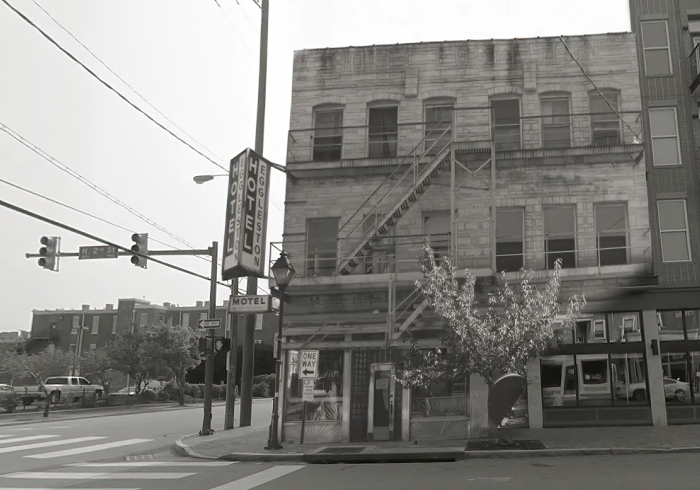 From 1904 when it was known as Miller’s, the Eggleston was one of many longtime Black businesses that got Jackson Ward yet another nickname: “The Birthplace of Black Capitalism.” Image courtesy of Hidden In Plain Site.

The remnants of Navy Hill, a once thriving Black community that was bulldozed when I-95 was built in the 1960s, have been covered up by yet another parking lot, leaving no reminder of what was or could have been.

“Richmond has tremendous history in erasing marginalized communities,” Browell said. “Navy Hill is one of the most obvious examples. In the 1960s, the community boasted schools with integrated teachers, and it was doing well from a progressive barometer.”

The tour concludes at the end of Monument Avenue, where a 12-ton statue of Confederate Gen. Robert E. Lee, riding proudly on his horse, was erected in May 1890, much to the delight of over 100,000 people who were ready to see the city flourish with the development of new real estate that the statue inspired in Richmond.

HIPS then shows the viewer what the statue looks like now, nearly 151 years after Lee’s death. It is covered in technicolor graffiti protesting its existence, with tags demanding its removal.

“We stay away from Monument Avenue until the last site on purpose,” Brown said. “The whole purpose of the project is to tell the story of those things which are hidden in plain sight. We decided to leave the Lee statue for the end of the tour, because it was a statement of the end of our journey. But for some, it’s just the beginning.”

A ‘swell of activism’

When the men came up with the idea for HIPS, protests and activism were sweeping Richmond. Waltenbaugh, who is also the founder and CEO of  Root VR, said the atmosphere of activism in the wake of Floyd’s murder led to positive responses about the tour’s creation.

“Richmond is not necessarily known as being a progressive city, but amidst the backdrop, people began to get excited about what we were doing,” he said. “It was the strongest swell of activism in Richmond that I’ve seen. When we were embarking on this project, some of the monuments on Monument Avenue were actively being taken down. Things were changing.”

Browell, co-founder of the market research company Feedback, said the men faced the challenge of making the tour emotionally heavy. But they also had to capture the Lee statue as it is now – a piece of protest art – which created a sort of time capsule.

“Transitioning to its modern example and reaction to the social justice movement shows how a monument of that style can become a different symbol,” said Browell, 44.

Through the tour, HIPS aims to teach viewers about lost historical aspects of Richmond – about places like Navy Hill and the Thalhimers department store, where 34 university students took part in a lunch sit-in to protest segregation. The context of the Black experience has not been acknowledged by the city, Brown said. 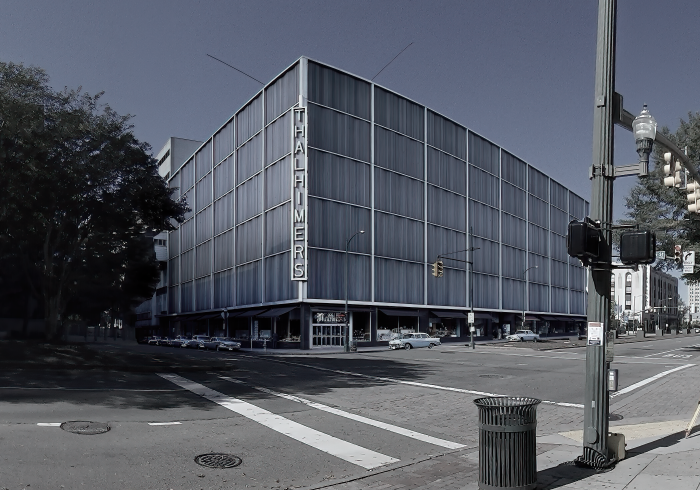 Thalhimers Department Store was one of the biggest and most popular places to shop in 1960s Richmond. It was also the site of the Richmond 34 protest, a peaceful sit-in by 34 Virginia Union University students at the store’s lunch counter. Image courtesy of Hidden In Plain Site.

“Richmond must acknowledge its wrongs and injustices to move forward,” said Brown, executive director of the Edge Career Development Program at Randolph-Macon College and co-founder of BROWNBAYLORTM, a creative business brand design company. “It’s important for us to get this out, so that we can move on with conversations. What I want you to do and understand is what we’ve been going through. If that changes how you view the city, at least you understand where we’re coming from as a culture that truly built this nation.”

Waltenbaugh said he hopes the takeaway from the tour is that as a country and as individuals, people begin to move away from an “us” versus “them” mentality.

“Thinking that way has driven us apart since the dawn of humanity,” he said. “The reality is that we, as humans, have vastly more in common with one another than we do differences. Black history is human history. We should all care about the plight and mistreatment and the marginalization of any one of our human brothers or sisters.”