Menyana Hardy played the clarinet in her middle school band in Birmingham, Alabama. She loved basketball, too, but for a time she aspired to go to the Alabama School of Fine Arts to keep playing music.

Then came her “middle years,” Menyana said, which “really kind of messed me up.”

She was a young teenager and wanted to fit in. “Everybody had these big boyfriends, with cars, and would hang out every night. I’m trying to fit in and that’s not even me. ... I wanted to be with my friends. Everybody’s going to Ensley High School. What do I look like if I go to Alabama School of Fine Arts?”

So, she went to Ensley, too. She started a relationship with an older teenager in the summer of 2001. He would change the direction of her life. The connection would soon lead to her incarceration for a high-profile murder, though she never killed anyone.

It felt early on like something bad would happen, Menyana said. Her new boyfriend soon revealed a possessive side.

“It was fun for about a week,” she said of the relationship. “Once I realized how he was, and he saw me talking to other people and how he acted, I was in shock because I didn’t know what the hell I had gotten myself into.”

Menyana said she experienced emotional and sexual abuse. She tried to break off the relationship, but her boyfriend stalked her, she said. One time, the boyfriend appeared near her sister’s apartment complex as Menyana arrived in a car that dropped her off. He had a gun, she said, and pointed it at the friend who drove her there. Terrified, she tried to defuse the situation. She escaped and never reported the incident.

“The stuff I was going through, I didn’t even know how to voice it to nobody,” she said.

A friendship and a tragedy

Around that time, in August 2001, she and her boyfriend saw Jackstin Hunter driving an Acura Legend with custom wheels, according to court records. The boyfriend asked who the driver was. He’s a friend, Menyana replied.

“We all grew up in Ensley,” Menyana said of Hunter and his family.

As a result, she was familiar with his relatives and their roles in the community: Hunter was a freshman at Miles College. For years, he and Menyana had seen one another at the rec center, downtown clubs for teenagers and step shows. Then there was Hunter’s mother, a school principal. Hunter’s uncle had been Menyana’s middle school band director. And Hunter’s brother, Danny Carr, became a successful lawyer. He would eventually cap a 20-year career as a prosecutor by becoming Jefferson County district attorney.

Weeks after Menyana and her boyfriend spotted Hunter in his car, things got much worse.

On Sept. 7, 2001, Menyana said her mother grounded her for skipping her home economics class. “I told my momma I wasn’t going to home ec to make no pillows,” she recalled.

She said Hunter had asked her to come to a party that night. Despite her punishment, she and Hunter spoke on the phone repeatedly that evening. Menyana said Hunter also spoke to her mother on one of the calls. He asked her to ease up on Menyana’s punishment. On other calls it sounded to Menyana like Hunter was first at the party, then at a McDonald’s, and then had poor cell reception. Between 12:30 and 1 a.m., Menyana called Hunter back, but his phone was off.

That’s where Menyana’s boyfriend and another boy kidnapped him. The boys took Hunter to Mulga, Alabama, near an old mine north of Birmingham. They robbed and killed him. Police found Hunter’s car at the site, burned and stripped of its custom rims.

“My brother was the best person you could have ever met,” Carr, the district attorney, told the Southern Poverty Law Center. “He never bothered anyone. … He was my everything and I truly miss him.”

Thanks to the phone records, Menyana was charged with felony murder. She did not kill anyone, but was accused of helping set up the kidnapping, robbery and murder by playing accomplice for her boyfriend. Though Menyana was a juvenile, her case was transferred to adult court.

A smear at the trial

Because Hunter’s brother had recently become a prosecutor, the Alabama attorney general’s office handled the case.

The Birmingham News repeatedly ran with the state’s story. “Prosecutors say there is no evidence linking her to the killing itself,” one article reads. “[Menyana] is accused of luring Hunter to her Ensley house” so the two young men could kidnap and rob him.

The narrative that she had used herself as bait carried a sexist undertone. Menyana felt smeared as promiscuous. Then there was her pregnancy. Shortly before the murder, she had started a relationship with another boy, who would become her son’s father. He had no connection to the case. Yet when sheriff’s officers questioned Menyana, they “asked her if she was pregnant with the victim’s child,” according to court records. She told them no.

At trial, prosecutors used a sexist trope against Menyana. During her closing arguments, an assistant attorney general called Menyana a “black widow.”

The language struck Menyana. In reality, she was a 17-year-old mother to a 1-year-old son. She was in an unfamiliar setting and trusting attorneys she didn’t know with her life.

“I remember looking at my attorneys and I’m like, ‘black widow spider?’ I said, ‘I am not that.’ She doesn’t know me. I kept repeating it over and over. … They don’t even know me.”

Soon after, the jury returned a guilty verdict. Menyana cried and turned to her family in the gallery. “I didn’t do it, I didn’t do it,” she said, according to The Birmingham News. Some of her family left the courtroom “screaming loudly.” Menyana nearly collapsed before being led away in handcuffs.

At sentencing, Menyana turned and spoke through tears to Hunter’s family.  “I am so sorry for whatever happened, but I’m not responsible. I lost a friend as well,” she said, according to the News.

Afterwards, Hunter’s mother told a reporter: “I think when you’re faced with 25 years, that’s what you would say.”

Menyana went to prison. The “black widow” comment haunted her for years.

“I felt lost and very degraded, but I had no way to stand up for my character because my lawyers didn’t allow me. It really sent me to a dark place. I had bouts of depression,” she said. “If it wasn’t for my spiritual connection with God, I wouldn’t have made it.”

For the next 15 years, Menyana worked hard in prison.

“I had to find my identity all over again,” she said. According to her notes, she completed 27 classes, certificates and work placements. She obtained a welding certificate and her GED diploma shortly after arriving in prison. Later, she took classes that helped her, like “Beyond Trauma,” and held various jobs in work release. In 2018, as her first parole hearing approached, Aid to Inmate Mothers accepted her into its reentry program in Montgomery, records show.

For years, she debated about whether and how to reach out to Hunter’s mother and brother. She began to research conflict mediation. “I was looking at this organization who were the mediators between the … defendants and the families. And I wasn’t so sure,” she said. “I prayed over this for years.”

Eventually, she decided to write a letter to be read at her parole hearing, where Hunter’s family might hear it. The letter was her only option since she couldn’t appear at the hearing herself, per parole hearing rules.

“Over the years my family would tell me they’ve seen one of you out and about,” the letter reads. “I’ve always expressed my need to talk to either of you, but my family didn’t know how you’d receive it.

“Out of fear and at the advice of my counsel in 2004, I remained silent about the incident that so carelessly took away Jackstin’s life. I see how my silence may have been perceived as a form of disrespect, and possibly as me having no remorse, but that was not my intent or true. I pray that one day you all will forgive me.”

Menyana’s family appeared before the parole board at her hearing on Feb. 27, 2019. Her cousin read her letter. Hunter’s family also attended to oppose her parole.

Months before, Carr had been elected as the first Black district attorney in Jefferson County’s history. He developed a reputation as one of the state’s most progressive prosecutors. During his campaign, he embraced lighter enforcement for marijuana possession and supported redeploying resources to prosecute violent crimes. After taking office, Carr founded a Conviction Review Unit to examine new evidence of possible innocence in certain felony cases.

Carr also spoke publicly about his brother’s murder. “Every day, I walk that fine line to make sure I’m not swayed by emotion while making sure I do the job and do what is right – but still relying on how I felt at the time,” he said, according to al.com.

He told them he believes in second chances, but murder victims and their families don’t get that second chance. His stance carried weight. The reasons board members gave for denying Menyana’s parole included “negative input from stakeholders” and “release will depreciate seriousness of offense or promote disrespect for the law.”

“I went as a big brother who lost his little brother to senseless violence. I will never compromise the love I have for my family or brother in any way,” he said. “Maybe forgiveness can come later in life but not at that moment.”

‘I found my voice’

After the hearing, family members who appeared on Menyana’s behalf explained the scene to her.

“They told me how many people they had there for [Hunter], and it’s like my words fell on deaf ears. But I was so glad that it got out,” she said.

The parole denial hurt. But, Menyana said, “I have never taken for granted that this lady lost her son. I have a 19-year-old. By the grace of God he’s not into the streets, and he’s graduating” from high school.

She added: “I cannot look at my son without thinking about her son.”

Menyana said she remains interested in pursuing restorative justice. Her next parole hearing will be during or after February 2024.

“At 34 years old, I finally feel like I found my voice,” she said. “Not being able to say anything for so long, I didn’t realize how heavy that was on me. Back then I didn’t say a thing. Now I’ve said my piece.”

Below is the letter that Menyana Hardy wrote to the family of Jackstin Hunter. 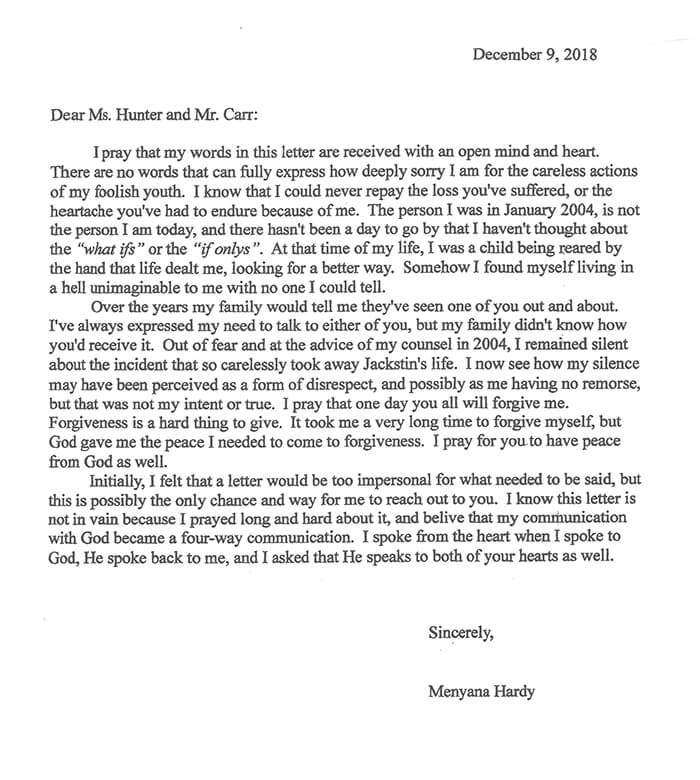 The image above is an illustration of Menyana Hardy by Ryan Simpson.