Celebrated in seven Southern states in April and May, Confederate History Month has endured for decades, in reverence of the “Lost Cause,” the false narrative that the Civil War was a heroic endeavor fought not to maintain the enslavement of Black people but rather to defend the region against Northern aggression.

To build on the growing movement aimed at stopping the public celebration of Confederate icons and history, the Southern Poverty Law Center on April 27 kicked off a billboard campaign in Florence, Alabama, where the local advocacy group Project Say Something in 2017 initially appealed for the contextualization of the Confederate monument that sits in front of the Lauderdale County courthouse.

After city and county officials refused to remove or relocate the monument last year, advocates in Florence, along with others across the South, joined forces with the SPLC’s billboard campaign to bury the “Lost Cause” myth.

As Confederate symbols and monuments continue to be removed from public land after the murder of George Floyd in May 2020, the SPLC hopes that its billboard campaign in several Southern states will help propel local grassroots movements by helping others understand that Confederate monuments and symbols legitimatize racial hierarchy and white supremacist ideology.

“Over the past few years, we’ve seen a significant number of organized efforts by community groups calling on their local governments to remove monuments and other symbols honoring the Confederacy from their courthouses, town squares, university buildings and other public spaces,” said Shay Farley, the SPLC’s regional policy director. “While notable success has been achieved, community groups across the South continue to encounter resistance from local and state officials.”

In Alamance County, North Carolina, a Confederate soldier is mounted 30 feet high on a single column in front of the courthouse. A carving of two Confederate flags is etched into the column’s concrete base, which contains the names of more than 1,000 Confederate soldiers who fought in the Civil War. Engraved on the monument is an inscription by the United Daughters of the Confederacy that reads, “To commemorate with grateful love the patriotism, valor and devotion to duty of the brave soldiers of Alamance County.”

The North Carolina Commission on Racial and Ethnic Disparities in the Criminal Justice System (NC CRED) has begun a conversation within the community about the state’s decision to celebrate Confederate Memorial Day on May 10.

“Obviously, we thought it was despicable, disgraceful and unpatriotic that North Carolina in 2021 was still honoring the Confederacy and what it stood for by observing a state holiday,” said James Williams, 70, a founding member and board chair of NC CRED.

After learning of the SPLC’s billboard campaign, Williams, a Black man, saw an opportunity to not only push for the removal of the courthouse monument but also to call attention to North Carolina for continuing the holiday.

“Unfortunately, the all-white Alamance County Board of Commissioners has steadfastly refused to remove the monument,” Williams said. “Authorities have also persecuted and prosecuted those protesting to have the monument removed.”

The Alamance County billboard installed on May 10 uses the slogan, “Show Love for All.” The theme, Williams said, reflects the idea that by removing the monument, the county can show love for members of the Black community.

“We wanted a message that would resonate with a broad population, would be easily embraced by them, and that would cause them to want to support the effort,” he said. “As Dr. King said, ‘Hate cannot drive out hate; only love can do that.’ So, we led with love as a metaphor for driving out the hatred that this monument represents.”

Williams noted that North Carolina’s decision to celebrate Confederate Memorial Day is an “assault to the dignity and humanity of Black people, but also to all Americans who believe in the concepts of fairness, equality and inclusion.”

Earlier this year in Jacksonville, Florida, high school teacher Amy Donofrio was reassigned to nonteaching duties and banned from her school’s campus after she refused a request by school officials to remove a Black Lives Matter flag hanging outside her high school classroom.

In May, the SPLC and its co-counsel Scott • Wagner and Associates filed a federal lawsuit to uphold the rights of Donofrio – a white woman – and her students at Robert E. Lee High School, by arguing that they have the right to express their support for Black lives.

On May 17, Jacksonville advocates came together in support of Donofrio, her students and the community by joining the SPLC’s billboard campaign.

Using the slogans “Stop Playing Games!” and “Change the Names!” the Northside Coalition of Jacksonville installed the billboard after five debates. Students, alumni, PTA members and parents began voting in April to decide whether to rename the high school and eight other public schools; the vote continues until June 1.

“Amy Donofrio’s stand was a brave and necessary one,” said Susan Corke, the SPLC’s Intelligence Project director. “At a school named to glorify one of the leading white supremacists fighting for the ‘Lost Cause,’ it is incredibly important that she was willing to stand up for Black lives. With her city rallying behind her, and the support of the SPLC billboard campaign to change the name of the school, hopefully the school and the community can unite around a more inclusive and antiracist future. As the late Congressman John R. Lewis would likely say, this is ‘some good trouble.’”

On July 14, 2020, Amerika Blair and fellow activists came together at a Montgomery Public Schools board meeting to demand that three public high schools bearing the names of Confederate generals and soldiers in Montgomery, Alabama, be renamed. 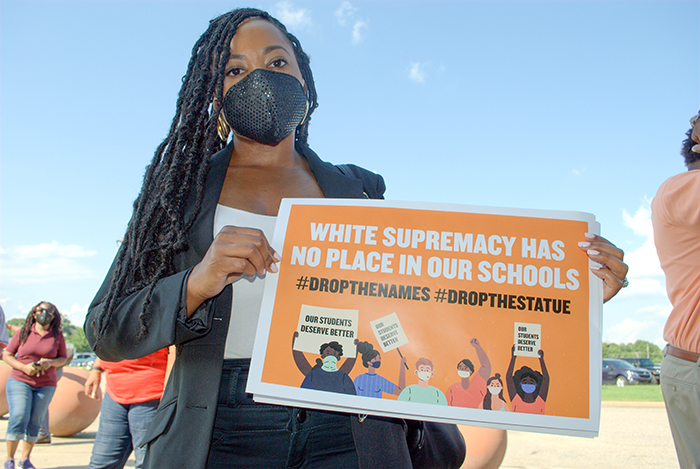 Amerika Blair joins other activists on July 14, 2020, in demanding that three public high schools bearing the names of Confederate generals and soldiers in Montgomery, Alabama, be renamed. (Credit: Liz Vinson)

But more than a year after the school board agreed to the name changes, the schools still bear the names of those Confederate leaders. Montgomery Public Schools has opened an online survey seeking suggestions for new names for the schools.

Yet Blair – one of four Black women who spearheaded the school renaming campaign – is disappointed that the board has not honored its promise. She said she hopes that participation in the billboard campaign will help the community understand how detrimental it is for Black people to continually confront Confederate school names, monuments and other symbols representing centuries of white supremacy that manifests today in systematic and structural injustices.

“This isn’t an ‘us versus them’ narrative,” Blair, 29, said. “It’s right versus wrong. To promote a more inclusive community and move forward, we must holistically confront the infrastructures that weren’t designed with all lives in mind.”

A proposed billboard for Montgomery will use the phrase, “Drop the Names!” to remind school officials that the city hasn’t forgotten their pledge to change the names of Robert E. Lee, Jefferson Davis and Sidney Lanier high schools.

“The naming of these schools was deliberate,” Blair said. “Black students have struggled to find an identity due to the marginalization of Black history, and the lack of truth materialized in American history.”

For Blair and countless other Alabamians, honoring the Confederacy during Confederate History Month is a blatant attack on Black people.

“The celebration of this month without contextualizing the terrorism of slavery is an abomination,” Blair said.

Since Floyd’s murder, more than that 160 Confederate monuments, statues, school names and other symbols have been removed from public spaces or renamed – and more than 300 since the white supremacist attack on a historic Black church in Charleston in 2015.

But, according to the most recent update of the SPLC 2019 report Whose Heritage?, more than 2,000 remain throughout the United States.

In coming months, the SPLC campaign could spread to Georgia, Louisiana and Alabama, states where other advocates are considering partnering with the SPLC.

As the billboards pop up across the South, the SPLC hopes that community members who have ignored the battle over Confederate monuments – because of apathy or ignorance – will be called to act.

“Since the end of the Civil War, Confederate symbols have served as a continual reminder of the pain and oppression they represent,” said Farley. “These racist symbols only serve to uphold revisionist history and the belief that white supremacy remains morally acceptable. All symbols of white supremacy should be removed from public spaces.”

Learn more about how communities are dismantling a whitewashed history of the Confederacy and sparking a reckoning with the truth about its cruel legacy by listening to the SPLC’s podcast, Sounds Like Hate.

Learn about the impact of Confederate symbols on public land in the SPLC’s “Whose Heritage?” Report

Photo at top: A billboard installed on May 10, 2021, in Alamance County, North Carolina, calls for the removal of a Confederate monument at the county courthouse. (Credit: The North Carolina Commission on Racial and Ethnic Disparities in the Criminal Justice System)