The line to vote was two hours long in LaGrange, Georgia, when the Black woman in her 70s was dropped off at the side of the courthouse. Clutching a walker, she made her way through the building to the end of the queue. When she got there, exhausted, election workers did not offer her a chair.

That’s when word got out to Lee Jones. Living with two autoimmune diseases herself and caring for elderly parents with cancer, Jones is the founder of a nonprofit called Inspire Positivity, Inc. She is also a volunteer with The Arc Georgia, an office of The Arc of the United States that supports people with intellectual and developmental disabilities throughout their lifetime.

Jones spends her days helping people in the small town of LaGrange and beyond to overcome obstacles. Every day during early voting for the 2020 general election, Jones posted her cellphone number on Facebook for anyone with disabilities who might need help casting a ballot.

Someone in line on this particular day called Jones, and she got on the phone with the elections manager at the courthouse. Instead of giving up and going home, the woman with the walker got the assistance she needed to safely vote. 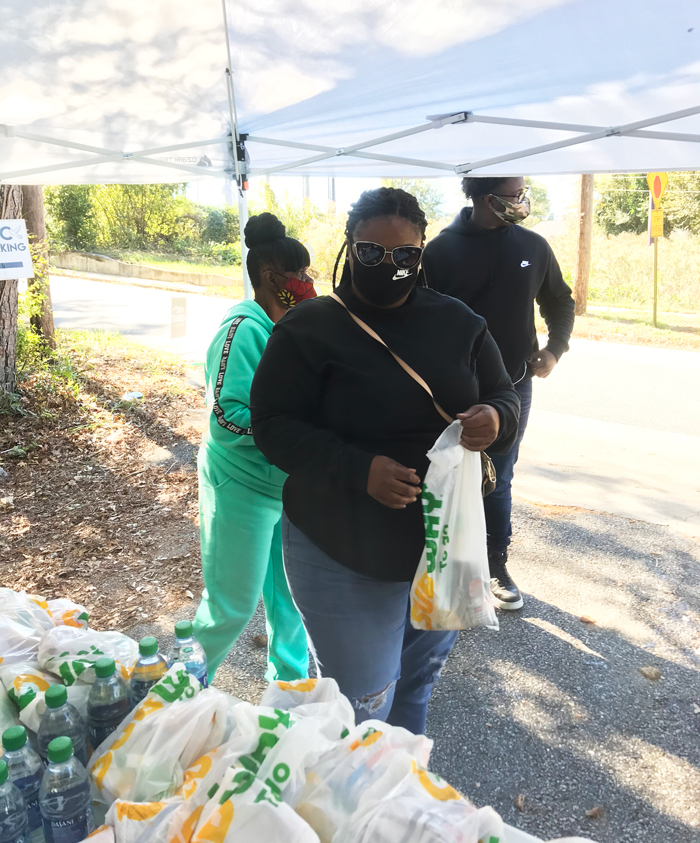 Voters get refreshments after casting their ballots in the Senate runoff election on Jan. 5, 2021. The refreshment table was set up near the Griggs Center voting precinct in LaGrange, Georgia.

Across Georgia and throughout the country, the story was the same in 2020. Even amid a pandemic that presented them with unique health risks, people with disabilities who may have been deterred from voting in the past mustered the determination and the drive to make their voices heard. Advocates like Jones gave them rides, helped them fill out forms, offset harassment and allayed their fears.

But now fear is again the watchword for people with disabilities in Georgia. A new state law broadly restricts assistance to voters. It criminalizes offering food and water to people close to voter lines, makes it harder to vote by absentee ballot, and makes it more difficult to offer the sort of emotional and physical support that is essential to many voters with disabilities. Among other provisions, the law severely limits the number of secure ballot drop boxes, disqualifies most out-of-precinct provisional ballots, reduces early voting for runoff elections and dismantles local control of elections.

Enacted amid demonstrably false claims about “voter fraud” following the 2020 election, SB 202 is a wide-ranging and blatant repudiation of voter rights in a Southern state with a long history of disenfranchisement, particularly for people of color.

The lawsuit, Sixth District of the African Methodist Episcopal Church v. Kemp, charges that multiple provisions of the law violate Section 2 of the Voting Rights Act and the Americans with Disabilities Act and infringe on Georgians’ rights under the 14th and 15th amendments, as well as the First Amendment in terms of the ban on the free distribution of food and water.

The law is part of a wave of legislation designed to suppress the vote enacted across the country in the past several months. Earlier this month, Florida’s governor signed a long list of new voting restrictions, while the Texas Legislature advanced a broad bill along similar lines. As of March, more than 250 bills restricting the vote in the name of “combating voter fraud” were pending in 43 states, according to the Brennan Center for Justice. Courts have found no evidence of systemic, widespread voter fraud anywhere during the 2020 election cycle.

“This law hits straight at the intersectionality of race, class and disability,” said Nancy Abudu, deputy legal director for the SPLC’s Voting Rights Practice Group. “Limit access for voters, and you impose particular harms on people with a wide range of disabilities. Some of those voters, they need that side-by-side assistance to get them to the voting booth. They need mobile voting centers that come to them where they live. And they need a safe and simple way to register to vote and to secure absentee ballots, so they don’t have to go through the often considerable difficulties involved for them to get physically to the polls.”

The Arc Georgia saw the obstacles coming. Ramirez, a fiery advocate who has channeled what she calls the challenge and joy of having a son with autism into passionate community engagement, said she realized sometime last year that for people with disabilities, voting during a pandemic would be uniquely difficult.

“When you start to see these violations of civil rights you can’t unsee,” Ramirez said. “I had to start to take action.”

Ramirez started hosting Zoom calls every Friday with grassroots organizers from around the state to discuss voter rights in the disability community. She called people from Rev Up Georgia, a statewide nonpartisan network of individuals and groups dedicated to increasing participation in the electoral process by people with disabilities. Ramirez and others spread the word on social media and through disability advocacy community networks.

Soon advocates were arranging rides to the polls. One organizer, Zan Thornton, a wheelchair user, put together 500 rides for the runoff election alone, 40 trips for voters who are deaf or hard of hearing, and more than 50 for blind voters. Often, drivers were also helpers. They helped voters navigate the lines, made sure they had water and food and helped ensure they could read their ballots.

Volunteers with The Arc secured funding to send food trucks to polling places and helped direct mobile polling units to the homes of people with disabilities. A blind man in rural southwest Georgia named Stancil Tootle, a lifelong disabilities advocate, set up weekly Zoom forums he called “Tuesdays with Tootle” to educate people with vision impairment or other disabilities on how to register and vote.

One organizer with autism, Derek Heard, created a series of drawings about voting rights that were distributed by the network of advocates statewide. The group got U.S. Senate candidates to share videos of their stances on disability issues and broadcast them to disability networks. They mailed out postcards reminding people to vote, and they created a video collection they posted on YouTube of people with disabilities sharing their voting stories. The disability advocates felt they were making a difference.

But late this winter, as SB 202 started moving rapidly through the legislative process, the advocates felt excluded. While video testimony had been accepted since the COVID-19 pandemic began at most legislative hearings in Georgia, the process to do so was opaque and exclusive, shutting out most members of the public who could not testify in person. That would make it difficult, and in many cases impossible, for people with disabilities – at higher risk of contracting and experiencing fatal complications from COVID-19 – to testify in person. It was, Ramirez recalls, “like a boulder rolling down the hill at us.”

The new law will specifically disadvantage voters with disabilities by restricting early voting and access to drop boxes. The ban on mobile voting locations harms people with disabilities who do not have easy access to transportation. And at every stage, the complexity of the voting process will be ramped up, with stricter ID requirements and limitations on how voters can receive assistance.

For people with disabilities in Georgia, that adds up to a new series of obstacles in their already rocky path.

Photo at top: Alonso Roberts, left, a poll watcher and advocate for the Georgia Coalition for the People's Agenda, joins a volunteer with Confidence Missionary Baptist Church at a table carrying refreshments for voters on Jan. 5, 2021, near the Griggs Center voting precinct in LaGrange, Georgia. The table also contained information about voting rights for people with disabilities, among other resources.