Desmond Meade was visiting his hometown on St. Croix in 2014, several bottles of rum he had collected for friends in Florida on the table beside him, when he got the news.

The former drug user who had been convicted of a felony was building himself a new life. He had climbed out of homelessness, incarceration and addiction. He had graduated from college and gotten into law school. But the underpinnings he had constructed were shaky. He was already on academic probation, and now came word from the law school that he had failed a key class. He was being expelled.

At that moment, Meade stared at the bottles of rum. He reached into his pocket, thick with cash. He thought about going on a bender and spending the money on drugs.

Then Meade, whose journey since that day has made him a national leader in strengthening the foundations of democracy, thought again.

“The thing going through my mind was, how could I even go back to the States now? You know, so many people looked up to me,” Meade said. “I had the money in my pocket to buy all the drugs I wanted. That was a prime opportunity for me to relapse. But I didn’t. I picked up the phone and I called someone.”

When Meade got back to his home in Florida, not only did he manage to get reinstated in law school; a test determined that he had a learning disability. He got help and went from almost being kicked out of school to making the dean’s list. He graduated. And just four years later, he made history.

In 2018, Meade led thousands of volunteers in securing passage of Amendment 4, a Florida ballot initiative that restored the right to vote to people who had completed their sentences for felony convictions. The movement had begun with Meade and a small group of volunteers handing out pamphlets and painting signs.

Then it took off.

Approved by more than 64% of Florida’s voters, Amendment 4 re-enfranchised as many as 1.5 million people in the state who are disproportionately people of color. It was the largest expansion of voting rights in the country since the Voting Rights Act of 1965 that outlawed discrimination in voting.

In September, Meade became one of 25 people named as a 2021 MacArthur Fellow by the John D. and Catherine T. MacArthur Foundation. Commonly known as “genius” grants, the fellowships are among the nation’s most prestigious awards for intellectual and artistic achievement.

A year earlier, the organization Meade heads, the Florida Rights Restoration Coalition (FRRC), received a $1 million Vote Your Voice grant from the Southern Poverty Law Center to support its important work. Meade’s story is told in the latest episode of a new season of the SPLC’s Sounds Like Hate podcast. 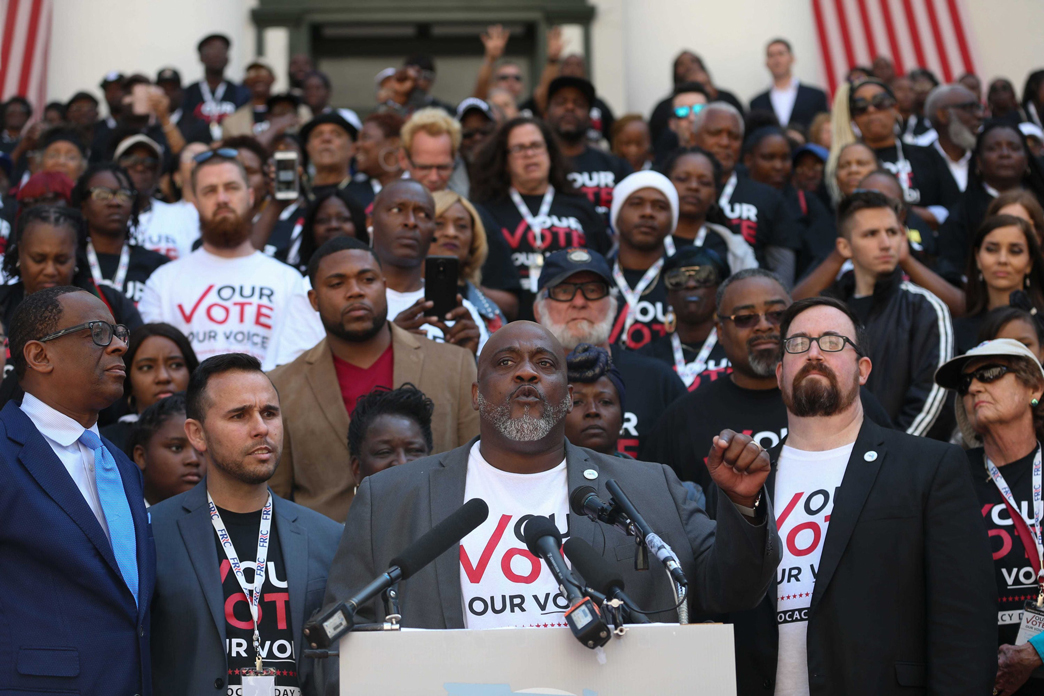 The recent recognition and the funding from the SPLC are much needed.

Soon after Amendment 4 passed, Florida’s Republican-dominated Legislature hit it with a gut punch, approving a law mandating that people with prior felony convictions must pay all the fines, restitution and fees imposed at their sentencing before they can exercise their right to vote.

In many cases, the totals come to tens of thousands of dollars. And in many cases, it is difficult for people to even know how much they owe, let alone be able to pay.

Records are spread out at offices around the state and are often shoddily maintained. What’s more, the state continues to add new fees for court appearances. It sells off the debt to private collection agencies, which charge interest as high as 40%. It suspends the driver’s licenses of people who miss just one payment on their debt, making it harder for them to keep jobs. And the law makes it a crime to vote if every cent has not been paid off.

But Meade, and the people he represents, a population he calls “returning citizens,” have not let the new law discourage them. They have scaled higher obstacles before.

“The narrative that’s always told is that progress is just up, up, up, right? It’s always a lot more complicated than that in life,” Meade said.

He should know. A few years before that day on St. Croix, Meade found himself at another low, staring at a set of railroad tracks, wondering if he should step in front of a train. Now he works from a book-lined room in a comfortable home, running an organization with real political power in Florida. He is happily married and raising five stepchildren. Most importantly, he dedicates his life to making a difference.

“There’s going to be setbacks, there’s going to be disappointments,” Meade said. “But I’ve learned a lot through my own personal experience. What I have learned is to see the possibilities, to maintain that sense of hope, and to be able to pierce through the chaos and find that sweet spot, you know, that helps handle adversity.”

Since Florida lawmakers moved to undermine Amendment 4, the FRRC has continually sought that sweet spot, raising more than $27 million from donors to erase the court-related debts of tens of thousands of returning citizens. Because of that, the coalition estimates that in the 2020 general election, 44,000 people with past felony convictions were able to vote. Since then, the FRRC has helped another 20,000 clear their debts and helps others navigate the legal maze to clear what they owe.

Meade’s organization has also taken its fight to court, successfully persuading judges to convert the fines and fees owed by hundreds of returning citizens to community service, making them eligible to vote.

And it has expanded its goals. Currently, the organization is working on a series of criminal justice reform initiatives, including bail reform and re-entry programs, and it is helping returning citizens find housing and employment. As the coalition has grown, it has enlisted returning citizens as volunteers and staff, enhancing their confidence, their professional skills and their political engagement. 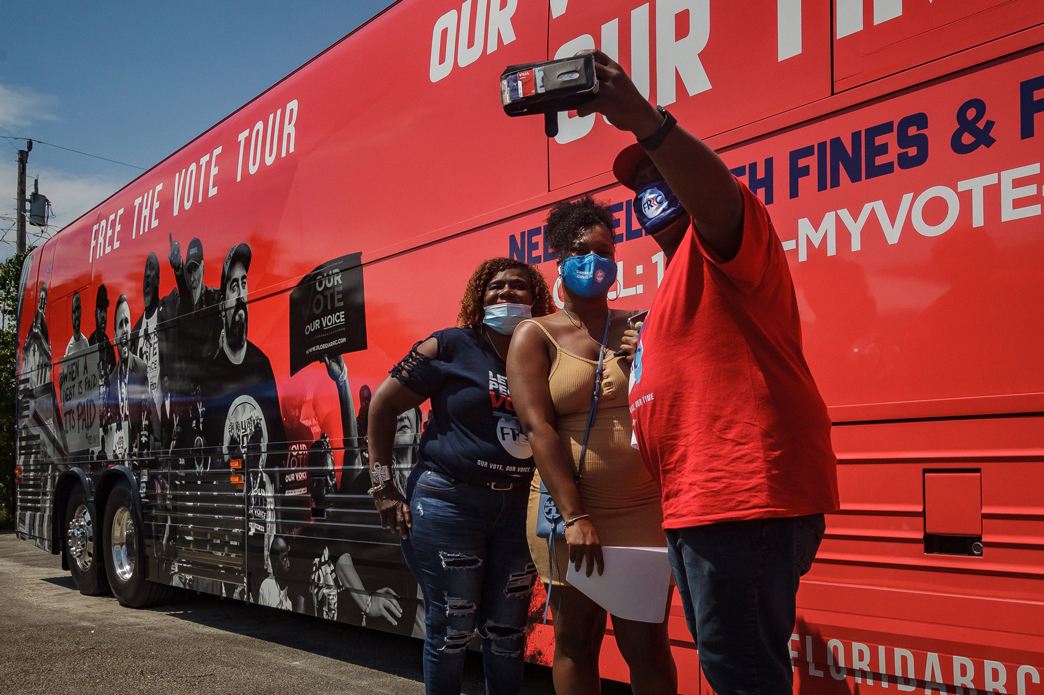 From left to right: Sharon Madion, fees and fines manager for the Florida Rights Restoration Coalition (FRRC); Darline King of Greenacres, Florida; and Desmond Meade, FRRC president and executive director, pose for a selfie after King completed the voter rights restoration process during an FRRC event in Riviera Beach, Florida, on Saturday, April 17, 2021. King had her fees cleared after signing a paper and making a call, she said. (Credit: Thomas Cordy via Imagn Content Services, LLC)

As people who have experienced incarceration achieve the right to vote, Meade is hopeful that political leaders will be more inclined to respond to the new voters with improved policies on mass incarceration and reentry into society, with reform of the troubled criminal justice system, and with programs that help people get on their feet after the challenges that tend to hit vulnerable communities the hardest.

Connecting the dots is what it’s all about.

“The goal is not voting just for voting’s sake, it’s voting in a way that will impact policy and that will directly affect the community, and that is what the SPLC is trying to do in supporting these efforts,” said Seth Levi, chief strategy officer at the SPLC.

“It’s about policies that can impact the lack of affordable housing, the denial of certain licenses to people with felony convictions, the cycle that forever brands people based on a past mistake and makes it impossible for people, for the most part, to live productive lives.”

Meade said he was driven years ago to start working on voting rights restoration because it was an issue that affected him personally. He knew, he said, that as long as he was unable to vote, he would lack access to the civil rights that people around him already had.

Meade finally settled his own court debts, and in November 2020 voted in the elections. After years of denials, a Florida clemency board has restored his civil rights, allowing him to take the state bar exam and even run for office if he wants.

But he will not rest until the sea of people who have lived the sorts of experiences he has can vote as well.

“Desmond Meade strikes me as someone who does not give up easily,” said Aubrey Jewett, associate professor of political science at the University of Central Florida and the co-author of Politics in Florida. Meade’s story “does show that one person really can make a big difference in American politics. But while he’s the public face of this movement, he has a large community of people behind him. They are looking at other ways to expand the franchise to as many citizens as possible.”

“Listen,” Jewett added. “I’m not going to paint a rosy picture of what they face. It’s hard to score goals. But they scored one already. And the match isn’t over.”

Photo at top: Desmond Meade is the president and executive director of the Florida Rights Restoration Coalition. The T-shirt under his jacket reads, “Let my people vote.” (Credit: Xavier McCleary)