In Mayor Steven Reed’s vision for Montgomery, Alabama, the city will be seen as a progressive, welcoming community. That’s why he established a committee last year to assess the numerous monuments, memorials and other reminders of its place as the first capital of the Confederacy in 1861.

“I want to make sure that the city of Montgomery is one that is forward-thinking and is broad and inclusive of everyone,” said Reed, the first Black mayor of the city that was incorporated in 1819. “I think when I initiated that survey, along with others that are in play, it was with that in mind. We want to make sure people think of this city as an active community that they would like to work, live and play in – not a hostile community that is holding on to myths and stories that were grounded in one of the worst chapters of our nation’s history.”

One of Reed’s first steps toward that vision was to rename Jefferson Davis Avenue for civil rights attorney Fred D. Gray, who in the 1950s defended  Rosa Parks and was called the “chief counsel for the protest movement” by Martin Luther King Jr. The move last year drew accolades from many as a change long overdue.

But renaming the street that honored the first president of the Confederacy came with a cost: It brought a $25,000 fine from the state of Alabama. And, if the state’s legislature has its way, that amount could rise dramatically for other municipalities in the future.

The state is one of six across the South that have enacted laws to protect memorials to those who fought for the “Lost Cause” from being removed, renamed or destroyed. The 2017 Alabama law applies not only to statues and buildings but also street names.

Despite the backlash from legislatures in those states, the movement to remove Confederate memorials continues to progress. 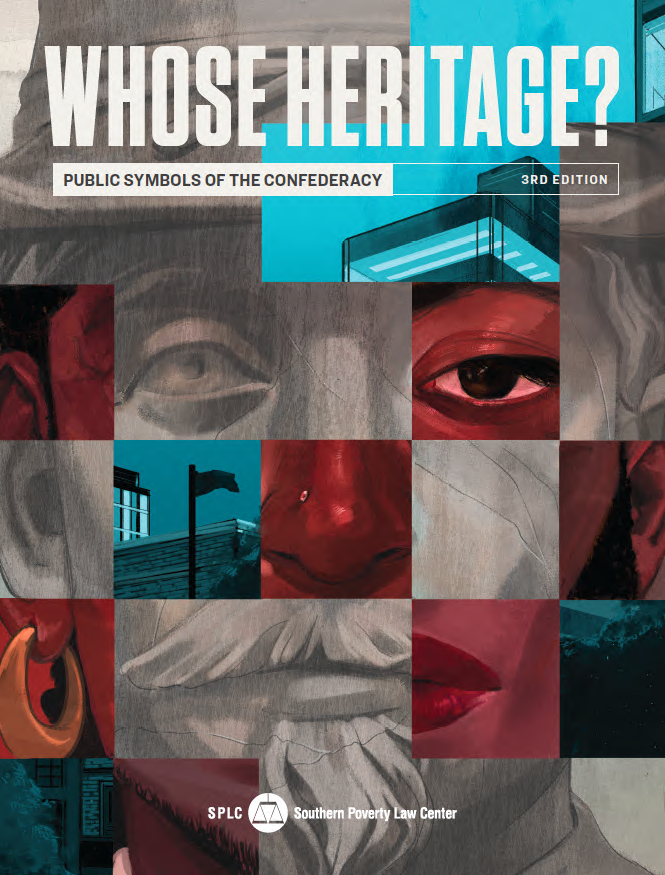 Click image to view the third edition of the Whose Heritage? report.

In the third edition of its Whose Heritage? report, released this week, the Southern Poverty Law Center identified 377 Confederate memorials that have been removed since 2015, when a white supremacist murdered nine Black people at the historic “Mother Emanuel” AME church in Charleston, South Carolina.

A flurry of removals, including the Confederate Soldier and Sailors Monument in Birmingham’s Linn Park, occurred after the deadly 2017 “Unite the Right” rally in Charlottesville, Virginia.

And more than half of the 377 have come down in the wake of the murder of George Floyd at the hands of police in 2020.

But – as in Montgomery and in Madison County, Alabama, where a memorial to an unknown Confederate soldier was removed last year – the city of Birmingham was fined for its removal of the Linn Park obelisk.

There are 2,089 memorials to the Confederacy still standing in the United States, according to Whose Heritage? Of those, the most numerous are street names, which account for 741 of the total. Although some lie outside the South, most of them – 1,910 – are within the footprint of the former Confederacy.

“People who resist removing Confederate monuments incorrectly claim those monuments represent history,” said Kimberly Probolus, ACLS Leading Edge Fellow at the SPLC and author of the new edition of Whose Heritage? “But that version of history completely erases the role that slavery played in the Civil War. We know that Confederate memorials were part of an organized propaganda campaign to venerate the values of the Confederacy and to promote white supremacy. Therefore, resistance to removing monuments is really about resisting racial justice and about rejecting the full humanity of all people.”

The report also notes that three men — Robert E. Lee, Jefferson Davis and Thomas “Stonewall” Jackson — account for 500 of the memorials, just shy of a quarter of the total. Lee has the most, with 235, compared to 144 for Davis and 121 for Jackson. It was the Lee statue in Charlottesville, Virginia, that was the focal point for the Unite the Right gathering, where white supremacists marched under torches at night chanting racist and antisemitic slogans.

The effort to remove the monuments and memorials is progressing, city by city. But with the exception of leaps after outrage over the Charleston murders, the Charlottesville rally and Floyd’s death, the battle has decayed into a sort of trench warfare. While conservative legislators fight to outlaw the removal of any monument, progressives are building coalitions to secure their elimination.

In Owensboro, Kentucky, a group of citizens has been trying for years to get a Confederate monument removed from the Daviess County Courthouse lawn, where it has resided for 122 years. After failed efforts in 2012 and 2017, the group launched a third attempt in 2020. Although the county agreed to move the monument, the United Daughters of the Confederacy (UDC) — a group responsible for erecting hundreds of monuments across the South — won a temporary restraining order last June that keeps it in place until the UDC’s lawsuit claiming ownership can be settled.

In Palatka, Florida, the Take ‘Em Down Putnam group has been trying to get a statue of an unnamed Confederate soldier removed from the grounds of the Putnam County Courthouse for almost two years. Putnam County commissioners voted to take it down in August 2020. Then, two months later, commissioners said the advocates had to come up with $200,000 — to be raised only from Putnam County residents — within 90 days to have it moved to the Putnam County Veterans Memorial Park.

Fighting on other fronts

In Montgomery, Reed said his administration is reviewing more street names that might need to be changed.

“We assembled a committee to give us recommendations on the history of street names that we will present to our city council in the upcoming weeks,” Reed said. “Our school board is considering changing the name of Jefferson Davis High School and Robert E. Lee High School as well as Sidney Lanier High School.”

In fact, the Montgomery County school board voted to change the names of Lee, Davis and Lanier high schools in July 2020, but the changes have not yet taken effect.

While the Whose Heritage? report was being unveiled Tuesday, Alabama state Rep. Merika Coleman was busy. The opening of the legislative session saw her filing several bills, including legislation to remove “Heart of Dixie” from Alabama’s license plates.

The term “Dixie” is closely associated with the Confederacy.

Those steps to refocus the state’s image are essential to making any long-term progress, said Jerome Dees, Alabama policy director for the SPLC.

“In order for Alabama to move into the future, we must cease our blind glorification of a past that violently denied, withheld, from so many, the rights we all acknowledge as fundamentally American — life, liberty and the pursuit of happiness,” Dees said.

While Coleman launches her legislative efforts, including revisions to remove racist references from the state’s Jim Crow-era constitution, conservative lawmakers are doubling down on the fines that municipalities face for removing Confederate symbols. One new proposal would change the one-time $25,000 fine under the 2017 law into a $5,000 fine to be assessed daily.

“I think it is legislative overreach,” Reed said. “I think it is a legislature taking a hypocritical position, complaining that the federal government does this in their affairs, then turning around and doing it in the local communities. Mayors and councils know more than legislators do about making decisions in the best interest of their communities.”

Probolus said there are several ways people can help in the effort.

“People can support or promote legislation, policies and community action that encourage the removal of symbols of hate from public space,” she said. “We can teach the history of the Civil War honestly and accurately. The SPLC Learning for Justice program has produced a Teaching Hard History framework that provides resources for educators looking to inform students about the history and legacy of slavery in the United States. Our website also includes educational resources, including a bibliography with books by historians and other experts on Civil War memory.”

Additionally, in conjunction with the latest Whose Heritage? report, the SPLC released an online advocacy toolkit.

The bottom line, Reed said, is to make sure the message a community sends is the one it wants to be received.

“I think it is important for people to understand that we want to honor the real heroes of this nation, in particular the ones who impacted the nation from this community,” he explained. “That’s why we chose to honor attorney Fred Gray for his contributions, not only to the civil rights movement but subsequent to that. It’s also important that we show our community that we know the pain of the history of this nation and the progress. We do that by telling stories, but we also do that through what we emphasize, the symbols.”

Top picture: The John B. Castleman Monument — removed from Louisville, Kentucky, on June 8, 2020 — is one of more than 200 memorials taken down since George Floyd's murder. (Credit: Melissa Lyttle)