He died in less than nine minutes, gasping for air before lying motionless on the concrete without a pulse.

People across the country, especially in the Black community, recoiled in horror as video evidence of the police brutality careened across the internet and TV screens. Thousands of protesters would soon surge into the streets, powering up a movement that had been brewing for years.

The murder of George Floyd was nothing new; this one had simply been laid bare for the world to see. And the nation cried out for justice.

Around 8 p.m. on May 25, 2020, the 46-year-old Black man was arrested for allegedly using a counterfeit $20 bill to buy cigarettes from Cup Foods in Minneapolis.

After the arrest, Derek Chauvin, a white police officer, shoved Floyd to the street and knelt on his neck. Pinned to the pavement, Floyd pleaded for his “mama.” He told Chauvin and three other officers, “I’m about to die. Please don’t kill me.” Chauvin, 45, simply told Floyd to “relax.”

“I can’t breathe,” Floyd replied. “Please, the knee in my neck, I can’t breathe.” He would repeat that he couldn’t breathe no fewer than 20 times before he eventually took his last breath, lost consciousness and died.

It wasn’t the first time the phrase was uttered by a Black man during an encounter with police. Printed on thousands of T-shirts and banners, it had already become a well-known rallying cry in the movement to fundamentally transform policing and end police violence against the Black community.

In 2013, Eric Garner voiced 11 times that he, too, couldn’t breathe after he was wrestled to the ground and put in a chokehold by a New York City police officer on suspicion of illegally selling cigarettes.

Garner’s death came a year after George Zimmerman, who fatally shot 17-year-old Trayvon Martin in Sanford, Florida, on Feb. 26, 2012, was acquitted after claiming self-defense against the unarmed Black teen. 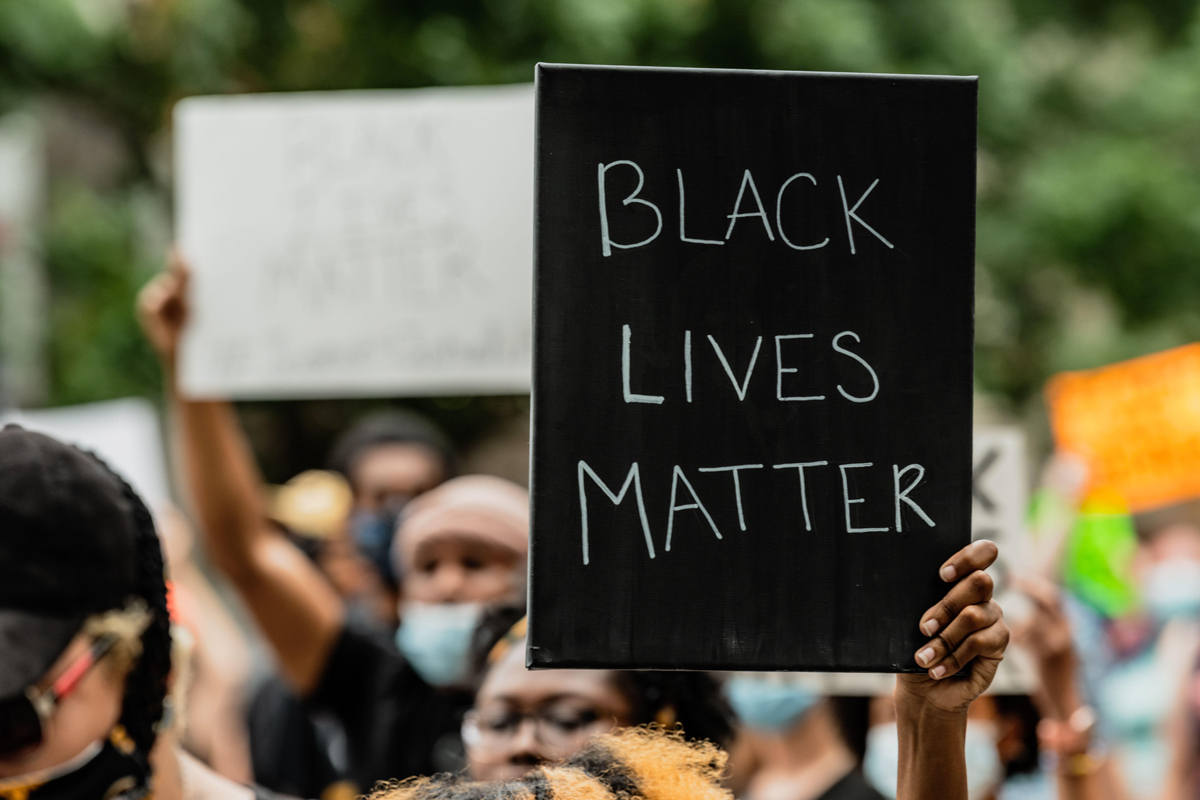 Protesters march from Columbia City Hall to the South Carolina State House in Columbia, South Carolina, on May 30, 2020, to protest the killing of George Floyd. (Credit: Crush Rush/Alamy)

But in 2020, tens of thousands of people would march in solidarity for Floyd and BLM in demonstrations that spanned the globe, making it one of the largest movements in history.

The movement inspired the George Floyd Justice in Policing Act, which passed the U.S. House in early March and is being negotiated in the Senate. The legislation would ban chokeholds and end qualified immunity – the legal protection that limits victims’ ability to sue police officers for misconduct. The law would also ban no-knock warrants in federal drug cases while mandating data collection on police encounters.

Additionally, the law would create a nationwide police misconduct registry that would help hold problematic officers accountable. What’s more, it would redirect funding to community-based policing programs while prohibiting racial and religious profiling.

To Benjamin Crump, the civil rights lawyer who represents Floyd’s family, the  movement has highlighted what we, as a nation, have always known.

“There are two justice systems in America: one for white America and the other for Black America,” Crump told the Southern Poverty Law Center. “Police brutality against Black people has always existed in our country, but the video of Chauvin slowly taking the life from George Floyd has left a lasting mark on the minds of many Americans.” 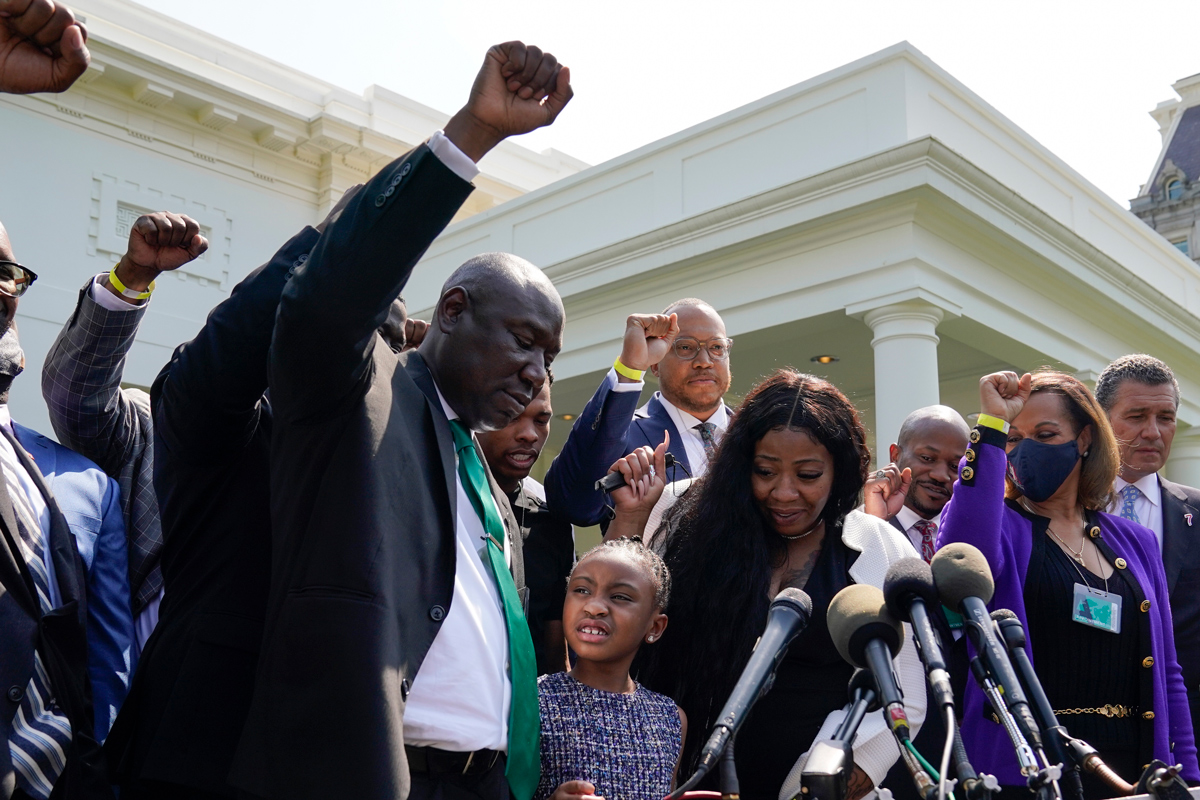 Benjamin Crump, left, joins Gianna Floyd, daughter of George Floyd, and her mother Roxie Washington, as they speak with reporters following a meeting with President Joe Biden at the White House on May 25, 2021, in Washington, D.C. (Credit: AP/Evan Vucci)

The lasting mark on the Black community was illustrated by a jump in depression and anxiety. Data from the Census Bureau showed that the rate of Black Americans showing signs of anxiety or depressive disorders climbed from 36% to 41% within a week after the video was released. Even today, the Black community is still waiting to exhale.

David Hodge, operations coordinator for the SPLC’s Civil Rights Memorial Center and a Black man, said he lives in a constant state of doubt.

“Every Black person that I know can tell you a story of police brutality or misconduct that has either impacted them personally or someone that they know,” said Hodge, 34. “This reality touches everywhere, so for me, there is a degree of uncertainty as to whether I’ll be treated in accordance with the law. That is an uncertainty I have to live with.”

In the year since Floyd’s death, fear and uncertainty within the Black community have become unavoidable enemies that swim in the depths of the subconscious.

George Perry Floyd Jr. was born in Fayetteville, North Carolina, and raised in Houston. In 2014, he moved to the Minneapolis area, where he lived in the suburb of St. Louis Park.

While the video of his murder was shocking – and galvanizing for the reform movement – the brutality was simply part of a pattern that has been out of public sight until recent years. 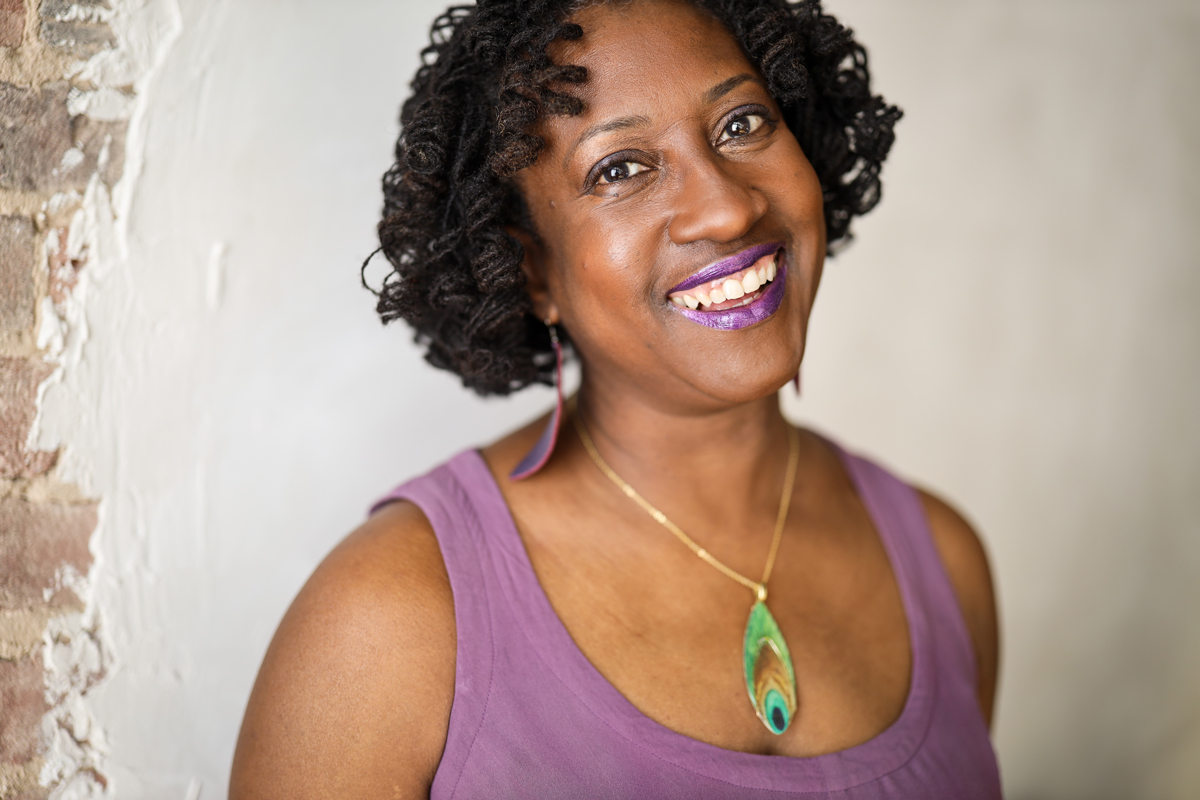 “Police violence, anti-Black violence, police brutality, they’re not getting worse, they’re getting filmed,” said Dr. Lisa Woolfork, an associate professor of English at the University of Virginia and a founding member of BLM in Charlottesville. “There are always going to be folks who are absolutely fine with the disposability of Black people. For some, the marginalized will always be an acceptable loss in a democracy.”

Indeed, from the Civil War and the fight to uphold white supremacy and the enslavement of millions of Black people, to Bloody Sunday of the civil rights era, when Alabama state troopers attacked unarmed marchers with clubs and tear gas, to the 1992 riots in Los Angeles after four policemen were acquitted of the beating of Rodney King, history has a way of repeating itself.

In a sad twist that is a reality for many, Woolfork – a Black woman – says she wasn’t surprised by Floyd’s murder.

“That doesn’t mean that I wasn’t wounded or harmed, however,” she said. “There is a way in which trauma and violence are regularly doled out to Black people, and it shows up in a variety of ways – physical violence, or the type of violence that shows up in apathy. Police operate in conjunction with the state and under an umbrella of anti-Blackness that is lethal for Black people of all ages and genders.”

In 2014, after BLM was founded, the nation witnessed the murder of Michael Brown at the hands of a Ferguson, Missouri, police officer.

More killings followed, and the victims became household names: Tamir Rice, Walter Scott, Alton Sterling, Philando Castile, Stephon Clark and Breonna Taylor. About 10 miles from where Chauvin was on trial for Floyd’s murder, Daunte Wright was fatally shot by a police officer during a traffic stop.

As of May 25, Newsweek reported that 229 Black people in the U.S. have been killed by police since Floyd’s death, according to the research group Mapping Police Violence. As one area mourns a victim, yet another death happens.

Crump, the Floyd family’s lawyer, clings to hope – a deep faith that the movement can and will catapult the nation into a new era.

“Hope is – and must always be – at the center of our efforts,” Crump, 51, said. “Hope that justice will prevail. Hope that good people of all races, creeds and colors will speak up and speak out when they see injustice. Hope that a reckoning has begun in America – both in its people and in its institutions. If I did not have hope, I would not be able to continue the fight for justice.”

But all know that hope is only a necessary mindset.

“Hope isn’t an action,” said Woolfork, 51, whose classes at the University of Virginia explore systemic inequity, racism and white supremacy. “Things can be animated by hope, that’s a gesture, but I’m not of the opinion that hope will get us to the other side. What will free us are the actions, the changes in policy and accountability for wrongdoing. This is the bare minimum.”

Echoes Hodge, “There are moments when I struggle to find hope.”

An independent autopsy, ordered by Floyd’s family, found that Floyd died by “homicide caused by asphyxia due to neck and back compression that led to a lack of blood flow to the brain.”

“Officers are trained and sworn to protect and serve,” Crump said. “Who was Chauvin protecting? George wasn’t a danger to anyone. He was begging for his mother, begging for air. How could Chauvin be innocent?”

On March 12, a $27 million settlement for Floyd’s family was approved. And on April 20, as National Guard troops deployed in anticipation of possible violence in Minneapolis, Chicago and Washington, D.C., a jury found Chauvin guilty on all three charges against him – second-degree unintentional murder, third-degree murder and second-degree manslaughter.

“The jury got it right,” Crump said. “Those who still say Chauvin is innocent are basing that belief not on the evidence but on their rush to conclude that a white man would have done nothing wrong in killing a Black man. While the jury verdict doesn’t erase centuries of wrong, it does give hope that George’s death can truly be an agent of change across America.”

But are the settlement and the verdict justice?

“True justice would require the impossible: George back alive, living in the embrace of his loving family,” Crump said. “But I believe his family sees the verdict as a measure of justice for George. Nothing can ever bring George back, but the verdict and the settlement were important steps in the fight for justice for all of us.”

In addition to seeking police reform, the BLM movement has also pushed to remove the iconography of white supremacy – the Confederate monuments, the public schools named for Confederate generals and other such symbols that are part of the landscape in this country, particularly in the South.

That movement began in earnest in 2015, when a young white supremacist killed nine Black people at a historic church in Charleston, South Carolina. Floyd’s death and the BLM movement gave it new momentum. In an update of its Whose Heritage? report, the SPLC reported in February that at least 168 monuments and other Confederate symbols have been removed from public spaces since Floyd was killed – and more than 300 since Charleston. Some statues were yanked down by protesters; others were removed by local authorities.

Yet, some states have enacted laws that punish local officials for removing symbols that represent an era of racial oppression and brutality whose legacy we continue to see in deaths like Floyd’s.

“Black lives have always been taken from us,” Crump said. “Black men, women and children are killed every day. I think George’s case put a microscope on the ongoing genocide of minorities in our country.”

Woolfork said that instead of acting on petitions to remove Confederate monuments, legislators and legislatures are seeking to enshrine white supremacy. 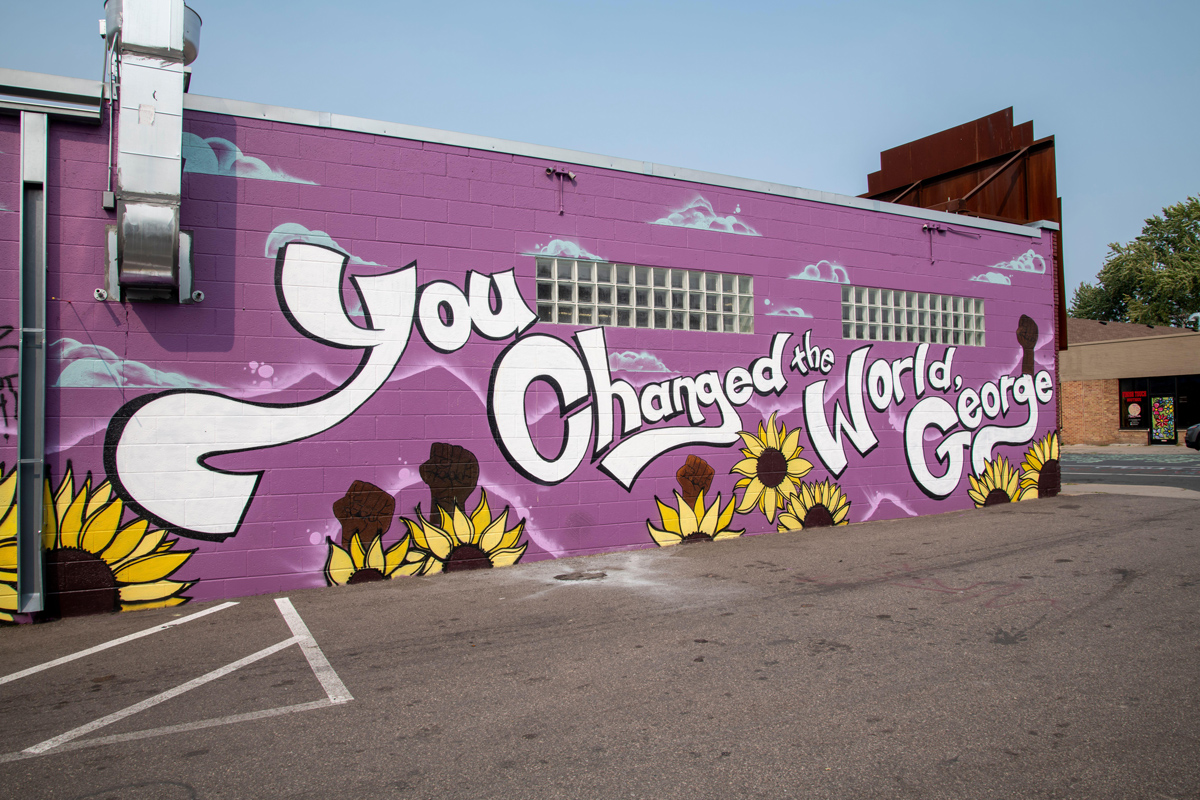 Street art on the side of a building in Minneapolis honors George Floyd. (Credit: Michael Siluk/Alamy)

A year after Floyd’s murder, racial equity seems out of reach for many Black people who live in fear of the next traffic stop.

As for what Floyd’s murder taught the nation, Hodge said that we can no longer excuse transgressions by police.

“We cannot look away or distract ourselves from the consequences of anti-Blackness and police brutality,” he said. “Floyd’s death is a reminder that the systemic devaluation and dehumanization of Black lives has very concrete implications.”

Woolfork said the nation must recognize that racism is the country’s “original sin” and that anti-Black violence at the hands of the state and the nation is not a relic of the past – but rather a present threat to be confronted.

“Everything surrounding George Floyd’s murder opened eyes that had for far too long been closed,” Crump said. “We can only hope – we must hope – that the lesson for law enforcement agencies is to do better at respecting all individuals they encounter.”