In the face of fierce Black community opposition during months of public hearings, the city council in Jacksonville, Florida, voted 17-1 on March 22 to pass a voting district map with racially gerrymandered districts.

The new map packs most of the city’s Black voters into districts 7, 8, 9 and 10, classifying these voters because of their race and weakening their ability to affect elections in other districts.

Further, it fails to reflect the city’s changing demographics. According to the 2020 census, Jacksonville’s nearly 1 million residents had equal percentages of non-Latinx white people and people of color. In wider Duval County, which is filled almost completely by the city — the country’s 13th largest — white residents slid into the minority.

A report that a coalition of civil rights groups submitted to the council concludes that Jacksonville’s districts show a consistent pattern of racially polarized voting over 14 elections since 2014, and that — in these elections — Black voters’ candidates of choice would have been elected, on average, in districts with at least a 41% Black citizen voting age population (the percentage of U.S. citizens age 18 and older who identify as Black).

The report on racially polarized voting in Jacksonville elections was commissioned by the Northside Coalition of Jacksonville, the ACLU Northeast Florida Chapter, the Harriet Tubman Freedom Fighters — which is a client of the Southern Poverty Law Center in voting rights litigation against the state of Florida — and the NAACP Jacksonville branch.

The civil rights groups asked that the council analyze the report’s findings and redraw the currently proposed neighborhood seat plan such that Black voters are properly and lawfully represented in the final plan. The report’s author, Hannah Walker, assistant professor of government at the University of Texas, told the SPLC that based on her analysis, “an alternative map could be drawn with additional districts that allow Black voters to elect their representatives of choice.” 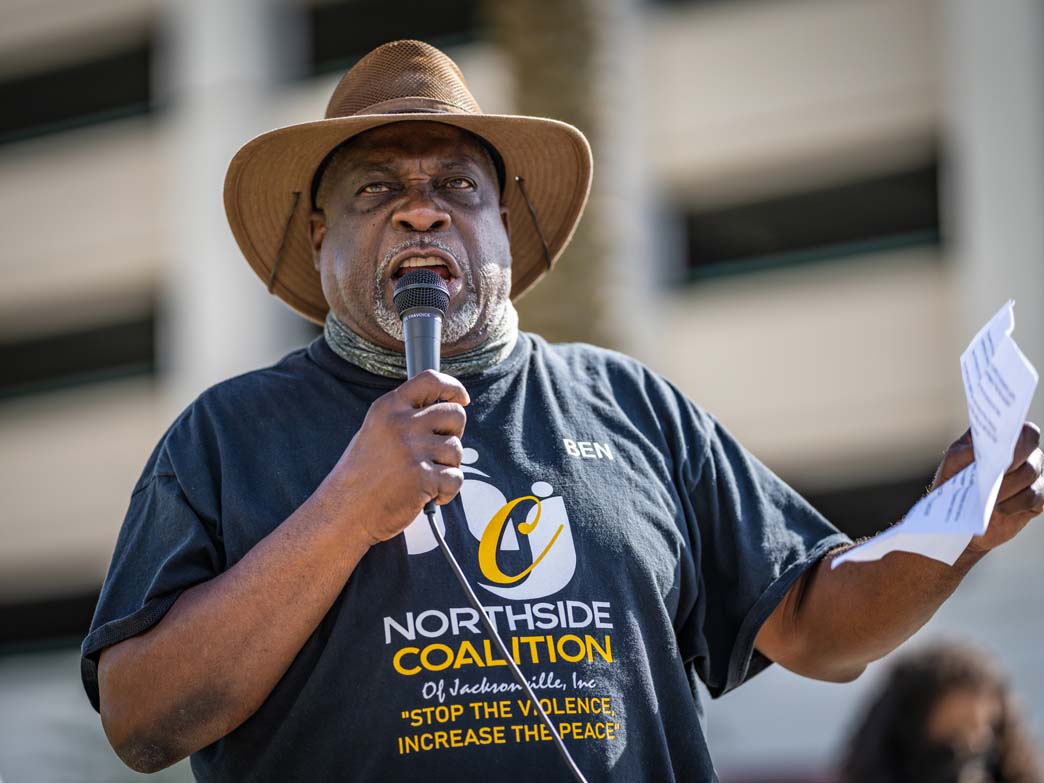 Some advocates for the Black community believe the council never even considered their concerns.

“At the public council meetings, we were allowed three minutes to speak but we weren’t allowed to ask any questions,” said Ben Frazier, president of the Northside Coalition, a community organization focused on social, racial and economic justice. “The council said at the beginning [of the hearings process] that they were going to pass the map. They said the process was transparent and open. They heard, but they didn’t listen. It was an exercise in futility.”

According to a University of North Florida (UNF) Public Opinion Research Lab (PORL) poll issued in mid-February, 89% of Duval County’s registered voters said they did not trust the city council to draw districts fairly. A whopping 85% said maps should be drawn by an independent panel composed of an equal number of Democrats and Republicans.

“Given recent challenges to the city council’s redistricting procedures, it’s not surprising that folks don’t have a lot of trust in the process,” said PORL Faculty Director Michael Binder in a statement released with the poll.

The city’s most recent effort to create an independent panel on perhaps its most racially divisive issue – police brutality – went down in flames. That’s exactly why Black residents say they need fair political representation.

In 2020, the year George Floyd was murdered by police in Minneapolis, there were 17 shootings involving officers with the Jacksonville Sheriff’s Office (JSO), resulting in 10 deaths, according to JSO data. The majority of the people shot were Black. That year, only 157 officers in the JSO’s 1,274-member force were Black, according to the U.S. census. 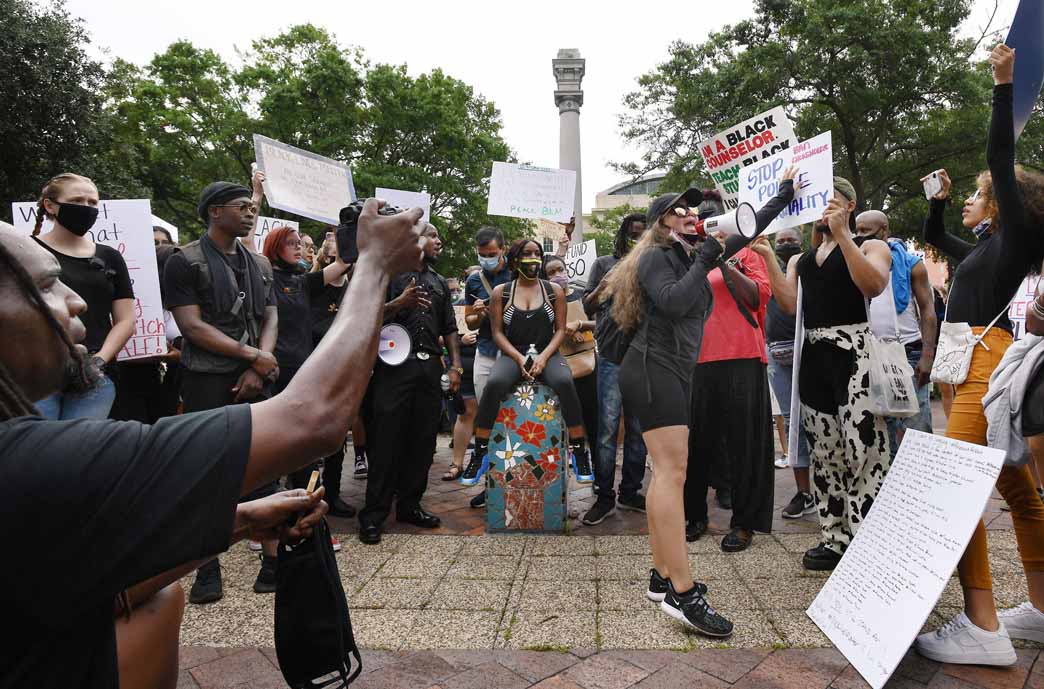 Black Lives Matter supporters rally inside a public park in Jacksonville, Florida, on June 9, 2020, after a Confederate soldier statue atop a memorial and bronze plaques around the base of the memorial were removed. (Credit: Bob Self/Imagn Content Services)

In the wake of Floyd’s death, as protests erupted across the country, thousands of Jacksonville citizens marched in protest, accusing the JSO of the same kind of brutality exhibited in Minneapolis.

In response, the council last year empaneled a group to look at ways of improving the relationship between the JSO and people of color. One panelist, Tammy Hodo, a diversity and inclusion consultant and Jacksonville resident, wrote a report recommending a citizen review board for oversight of the department. The JSO virulently opposed the idea.

“They shut me down,” Hodo recalled.

Eventually, District 6 Council Member Michael Boylan quit the panel, saying it was pointless because the community had no trust in law enforcement.

The city disbanded the panel. So far in 2022, JSO officers have shot three Black people, resulting in one death.

Hodo said the city’s redistricting map is in line with everything else that goes on in the city.

“The [district] map borders on egregious,” Hodo said. “It has brought truly lasting damage to Jacksonville.”

Anthony Brown, co-chair of the NAACP Jacksonville’s economic committee and executive board, expressed a common view that regardless of color, those in power are suppressing the votes of the city’s Black community.

“Jacksonville is a microcosm of the country. The districts that Blacks represent are the worst in the city in terms of all the community social indicators,” Brown said.

“Districts 6, 7, 8, 9 and 10 have Third World-like conditions. They are food deserts, even for the basics. They lack sidewalks, have poor irrigation, have no business of note – none that rival other parts of the city. Redlining still goes on but in other forms, and when money is allocated to these communities, the money somehow disappears.”

Big – and broken – promises to the Black community have a long history in corruption-plagued Jacksonville.

Critics of the redistricting map note the timing of a recent federal indictment accusing two top Jacksonville Electric Authority executives of conspiracy and wire fraud in an alleged scheme to siphon tens of millions of dollars from the city-owned utility. A former city general counsel has called the scandal “perhaps the greatest fraud in Jacksonville history.”

A group of businessmen — with the approval of the current mayor and other city officials — had attempted to take the utility private. They told citizens that privatization would lead to reduced electric bills. Billions of dollars were involved.

It was reminiscent of promises dating back decades to when, after a wave of major corruption, the city in 1968 was consolidated into the geographically larger Duval County. Politicians and community leaders claimed the consolidation would cut waste and graft and bring money to the inner core of the city by taxing residents living on surrounding farms and beaches to finally pay for services they used. Consolidation created the biggest landmass city in the U.S., with plenty of room to fairly reapportion Black voters.

However, many residents believe that consolidation backfired and led to the weakened political power of Jacksonville’s people of color.

“The city said it would expand the tax base and provide for improved public services like fire and police,” said Frazier, the Northside Coalition president. “We suggest there was another agenda: to consolidate and dilute the Black voter population from the beginning. We got the short end of the stick.”

The already-blighted minority districts north and west of the St. Johns River became worse. (The city’s poverty rate is 15%, but some neighborhoods have a rate as high as 50%.)

“Part of why downtown Jacksonville is so far behind other cities is that money that should be going to the city is going to the wealthy coastal communities and suburbs,” said Sam Coodley, voting rights statewide organizer for the ACLU of Florida.

In the end, the battle over the district maps is all about equitable treatment and the distribution of resources.

“We are concerned about infrastructure, affordable housing, education, criminal justice reform and reallocation of funds that go to law enforcement,” Frazier said.

In fact, nearly 40% of Jacksonville’s 2022 budget of $513 billion goes to the JSO. In the most recent 2020 data, the crime rate was below the national average, although violent crimes slightly increased that year, according to the Florida Department of Law Enforcement. 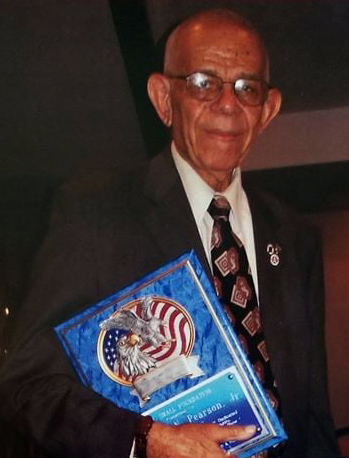 Giving Black Jacksonville residents the opportunity to elect candidates who represent their interests will help create more equity in the city, not just in law enforcement but across the board, advocates say.

Just ask 100-year-old Lloyd Pearson about the power of the vote. After retiring from the post office, Pearson registered some 35,000 Jacksonville voters — 29,000 Black and 6,000 white — between 1977 and 1991 under the NAACP’s political action committee.

“People come out heavy in presidential elections but weak in local elections,” Pearson said. “[But] when you want something done in the city, you go to the tax collector, the school board, the mayor, the sheriff and the city council. You don’t go to the president of the United States.”